Relocating Winnipeg’s rail lines out of the city would be a massive undertaking, but several expensive projects to go over, under and around existing lines — along with a larger tax base after land is freed up — could make relocation financially attractive in the long term.

Relocating Winnipeg’s rail lines out of the city would be a massive undertaking, but several expensive projects to go over, under and around existing lines — along with a larger tax base after land is freed up — could make relocation financially attractive in the long term.

More than $290 million has been budgeted or spent in the past decade on building grade separations (underpasses and overpasses) at rail crossings in Winnipeg, including the upcoming $155-million Waverley Street underpass. And there are at least four more large-scale projects anticipated in the coming years, including underpass upgrades for Pembina Highway, Marion Street and Osborne Street, and a strategy for replacing the aging Arlington Bridge.

Add in the $590-million Southwest Transitway, which includes the planned Pembina Highway project, and the price tag for keeping traffic flowing over or under rail obstacles in Winnipeg looks increasingly steep.

However, relocating the rail lines could be a permanent solution and significantly reduce the city’s future spending on grade separations, proponents say. This is a “window of opportunity” the City of Winnipeg should take advantage of, according to one rail consultant.

Mary-Jane Bennett, a British Columbia-based railway expert, has been studying rail relocation for the city of White Rock, just south of Vancouver. She’s seen first-hand what rail relocation can do for a metropolitan area.

In the Surrey-White Rock region, studies determined removing the rail lines could beautify the area and provide better access to a scenic beach.

“From the B.C. perspective, it’s something that has gained traction and gained the imagination of a number of players,” Bennett said.

In Winnipeg, rerouting train traffic away from the city and removing the rail lines could free up 480 acres of prime downtown real estate — land the city would get tax revenues from. Currently, the city gets only about $870,000 a year in property taxes from all the railway tracks that snake through it (although this does not include taxes from rail yards and maintenance facilities).

The potential of the freed-up land should not be looked at in the sense of property taxes alone, according to Christina Maes Nino, who works for the Social Planning Council of Winnipeg.

“The rail lines, the value of their property, considering it’s the middle of the city, it’s a great location that would be really desirable. Certainly it could bring a good deal of revenue back to the city, especially at a time when the city doesn’t have enough revenue.”

Regina is capitalizing on a similar opportunity. The Saskatchewan capital is in the midst of a major revitalization project that includes developing the now-vacant Canadian Pacific Railway yards in the downtown area.

The rail yards in Regina were relocated to a new hub built west of the city in 2011. The province spent about $100 million on the yard-relocation project and building transportation links to the new hub.

The city now has about 17 acres of prime land it is looking to turn into commercial and residential development. While consultations are ongoing, the city estimates the development will cost $500 million, most of it from private investment.

At least one report in Winnipeg has estimated the cost of rail-line relocation at about $1 billion, which compares favourably with the multiplying costs of bridges and underpasses. With a federal law that gives Transport Canada the ability to set out rail-relocation plans and kick in up to 50 per cent of the cost, the potential cost savings of relocating the tracks rather than continuing to build bridges and underpasses look increasingly clear.

Art DeFehr, a local businessman and rail buff, proposed an alternative rail route that runs south of the city and includes new tracks and yard facilities for the rail companies in his $1-billion estimate.

“Just to build the bypass is not that expensive,” DeFehr said. “What I was working into my estimate was actually rebuilding yards and things like that.

“What has never been done, in my view, is a study that takes into account all of the possibilities. They often look very narrowly at fixing yards and things like this, but I don’t think there’s ever been an actual study of moving the rail lines south of (Winnipeg).”

But for any relocation plan to benefit the city fully, Winnipeggers will need to have their say about not only how much money the relocation brings in, but also how it affects their neighbourhoods.

“I think what we need to get the buy-in needed to develop that land is a shared community vision for what happens there,” Maes Nino said.

“Winnipeg tends to dream of, ‘One big thing that’s going to fix Winnipeg.’ We move the rail lines out of Winnipeg… it needs to fit with everything else. I think the vision itself has to come from Winnipeggers, and they need to be involved in the process.

“We can’t just build a new neighbourhood like it’s an empty plot of land surrounded by nothing.”

There are several ongoing projects for grade separations at rail crossings in Winnipeg. Some are under construction, others are in the planning stages. Here is a look at what’s been proposed:

The city wants to increase the width of the Pembina Highway underpass at Jubilee Avenue to improve traffic flow. It’s part of the Southwest Transitway project, which has an estimated total cost of $590 million. The upgrade is supposed to provide a third northbound traffic lane and improve access for pedestrians and cyclists.

Arlington Bridge, which spans the Canadian Pacific Railway yards, opened in 1912. It is reaching the end of its life and cannot be repaired, according to a recent consultant’s report. The CPR yards crossing study is looking at possible ways to handle traffic once the bridge is closed. Options include widening the McPhillips Street underpass or building a tunnel connecting Sherbrook Street south of the rail yards with McGregor Street to the north.

Projected cost for project: Early estimates are in the hundreds of millions of dollars.

More traffic is expected to flow along Marion Street as a result of new developments to the east and southeast in Transcona and Sage Creek. The city wants to look at widening Marion and building either an underpass or overpass at the CPR Emerson rail line, which dissects Marion just east of Archibald Street. Currently, delays due to trains are common and the city says the roads there were not designed to handle the increasing traffic volumes.

The city has proposed a design study for reconstructing or widening the Osborne Street underpass at Confusion Corner.

With booming residential growth in south Winnipeg, increasing traffic was further compounded with delays caused by trains south of Taylor Avenue. To alleviate traffic congestion, the underpass was built in 2004, along with the construction of Sterling Lyon Parkway.

After being delayed nearly a year, two lanes of the Plessis underpass opened in October 2015. The underpass (for which construction began in 2012) was proposed because of regular traffic congestion at the rail line between Dugald Road and Kernaghan Avenue. Two more lanes are expected to open in September, and the whole project is set to be completed by March 2017.

About 30,000 vehicles cross the train tracks at Waverley Street and Taylor Avenue each day, and they are frequently backed up because of the approximately 40 trains that cross at that spot. Funding was firmed up for the project in 2015, after the federal government agreed to kick in its share in a pre-election announcement. 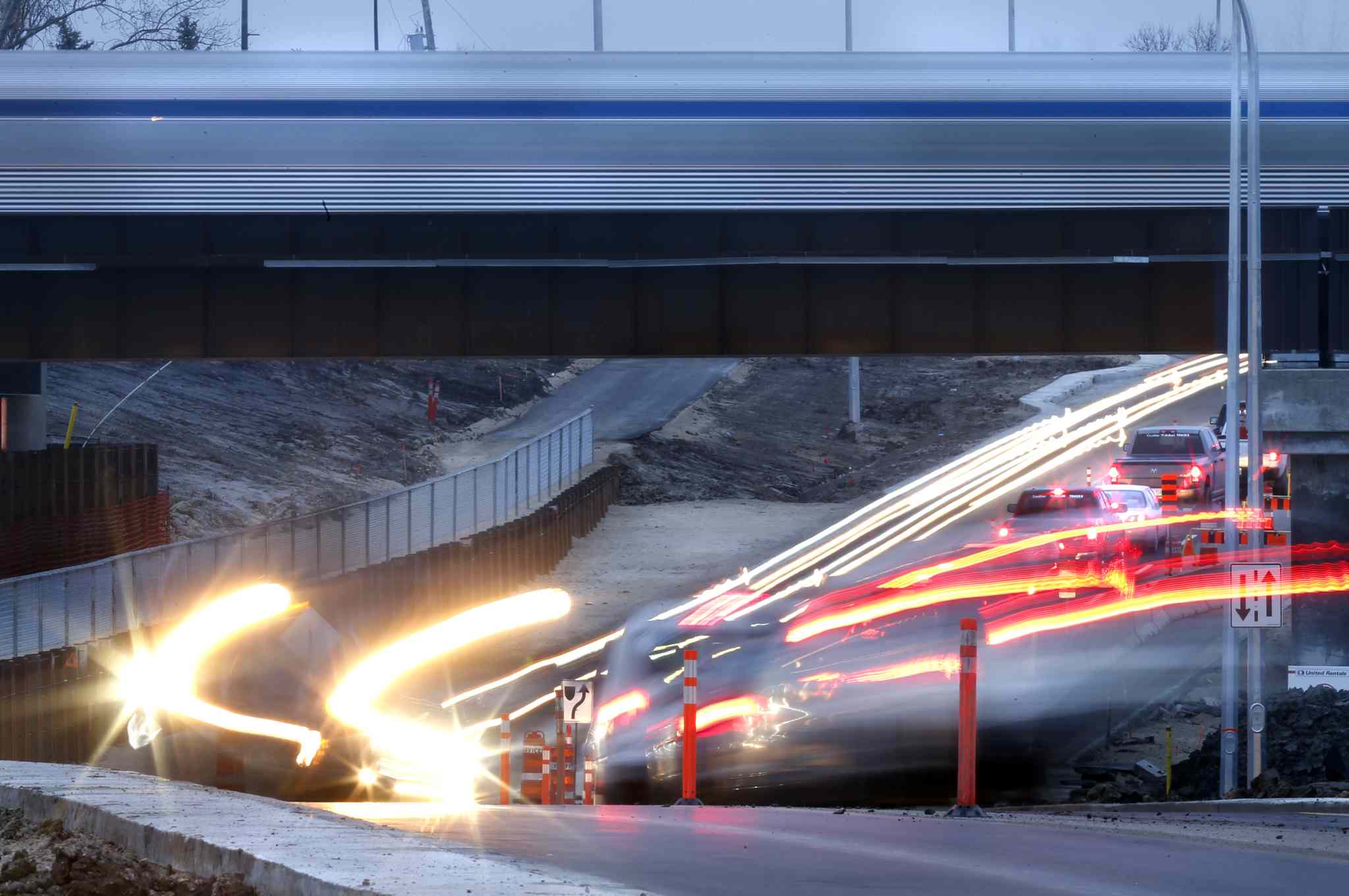 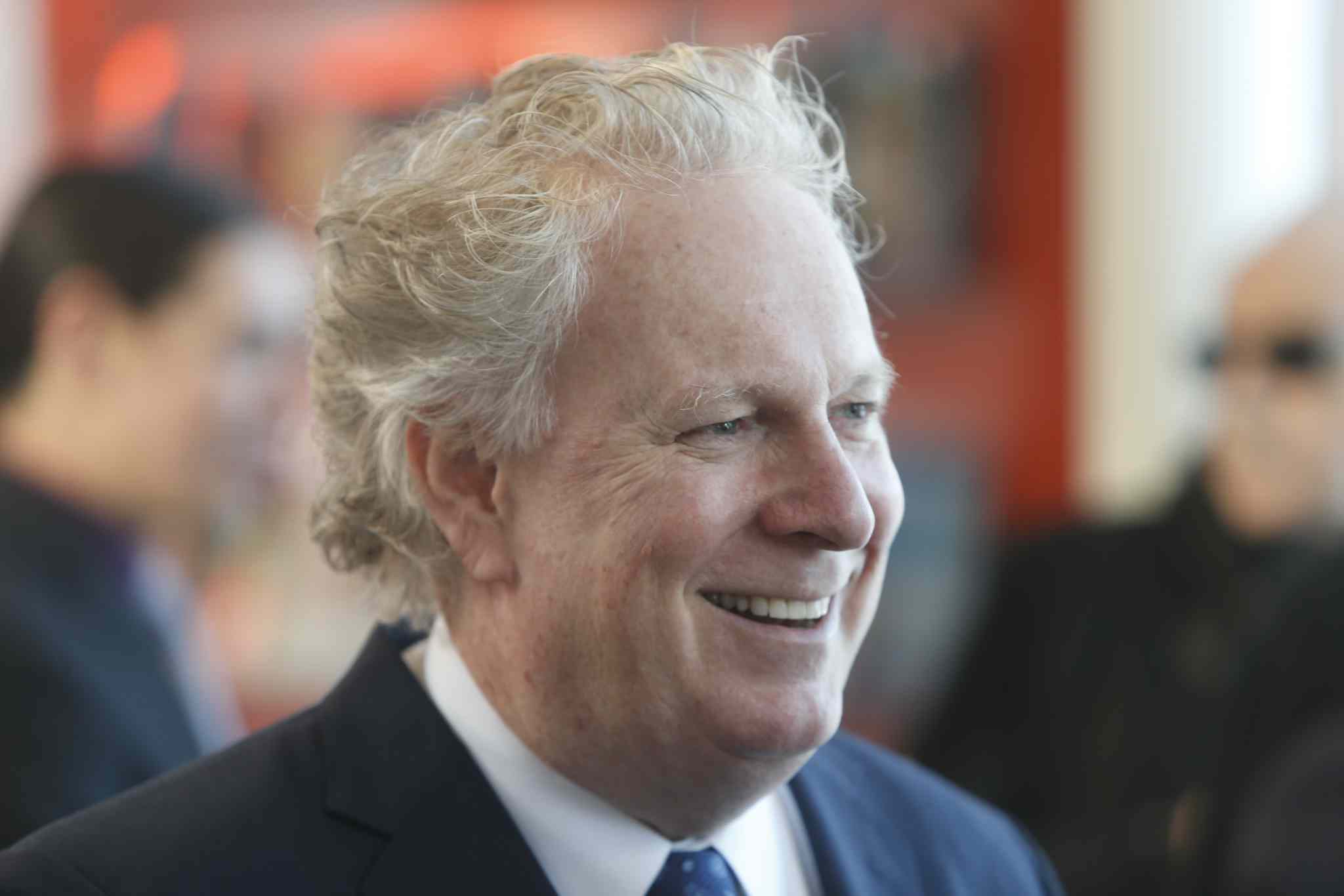 While most support relocating city’s rail lines, many doubt it will happen 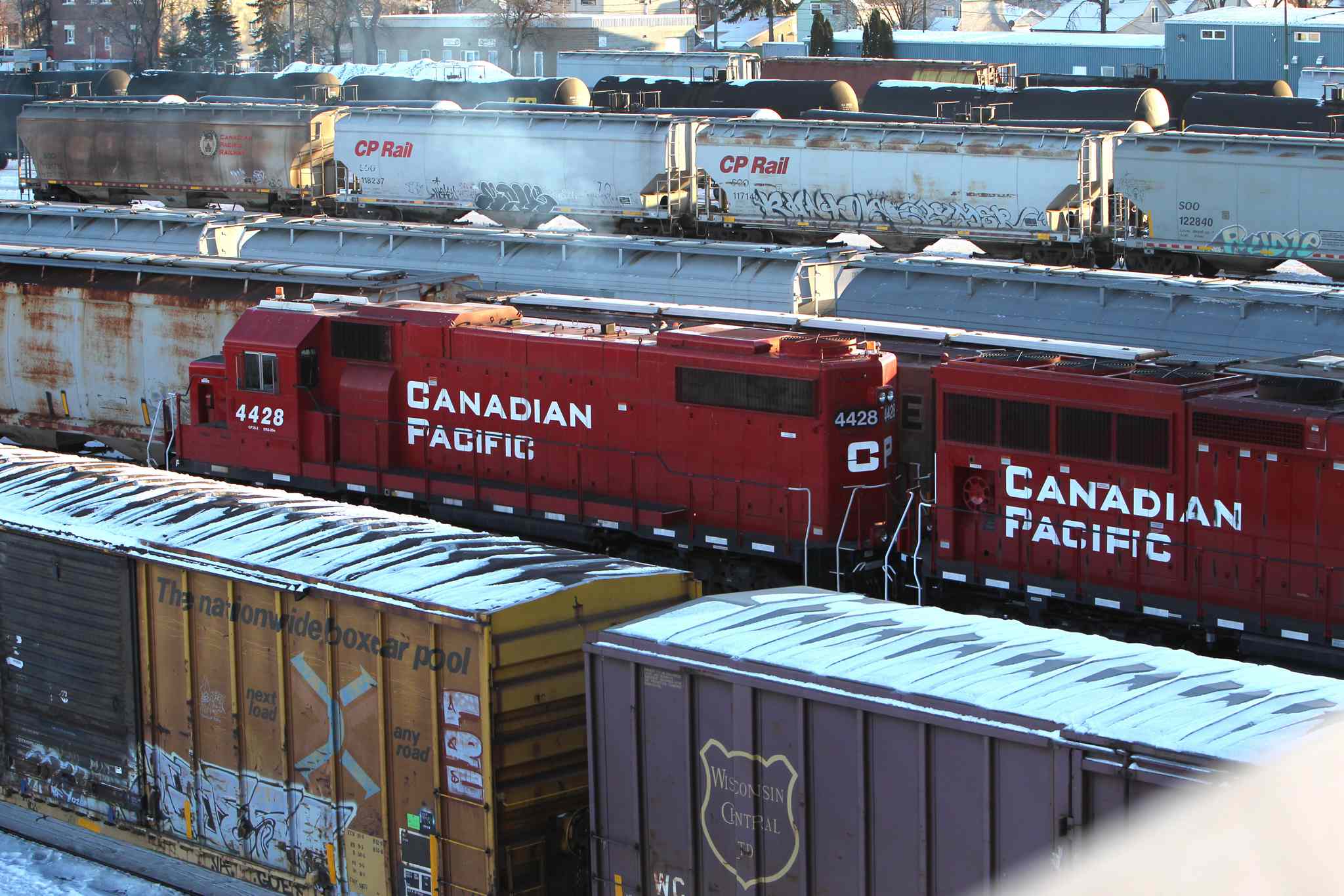 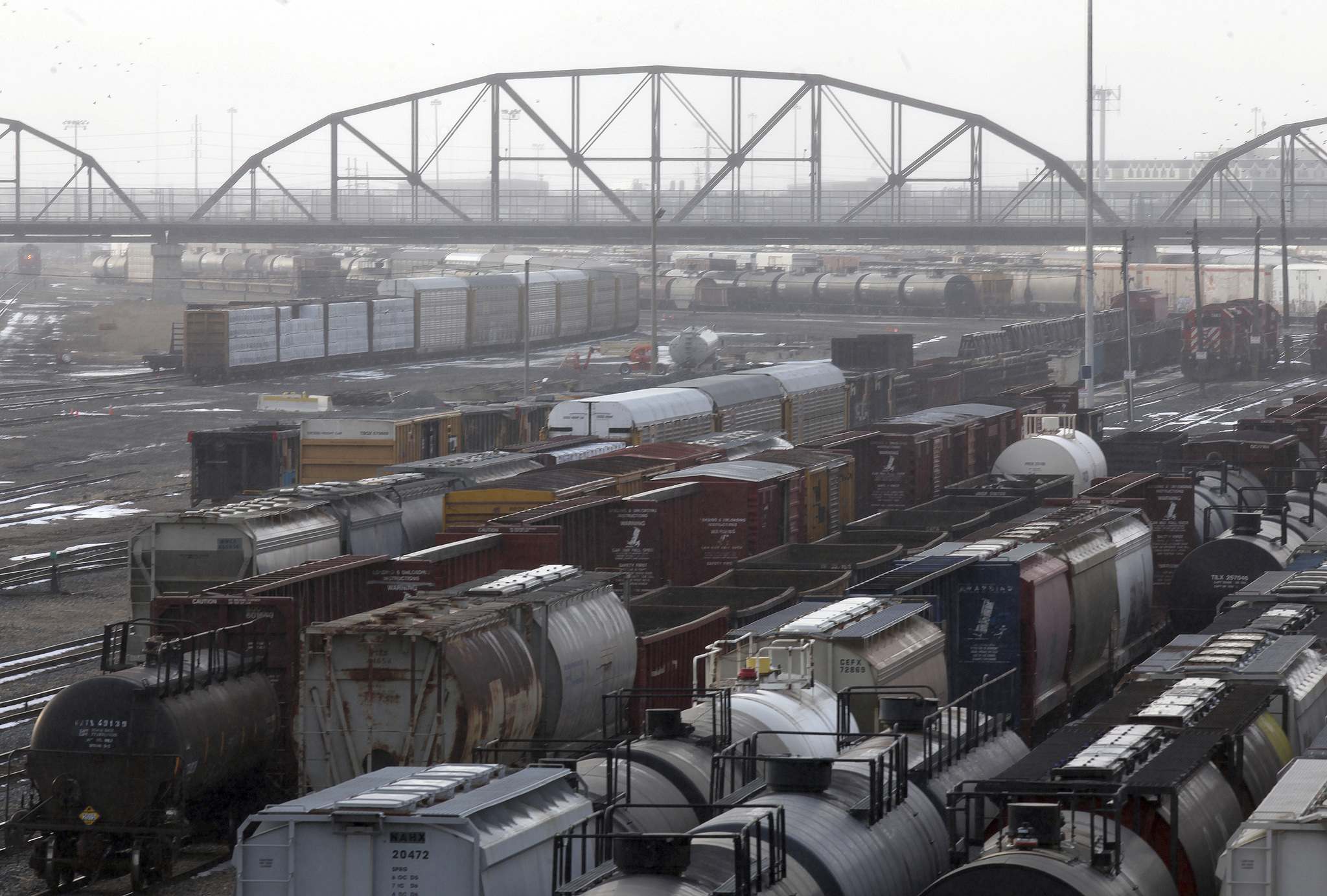