The column ran 1,200 words in Saturday’s paper. But the central premise can be summarized in just 20: Winnipeg Jets head coach Paul Maurice bears some of the responsibility for the poor play of his team this season.

The column ran 1,200 words in Saturday’s paper. But the central premise can be summarized in just 20: Winnipeg Jets head coach Paul Maurice bears some of the responsibility for the poor play of his team this season.

Put another way: An NHL head coach is at least partly responsible for the way his NHL team plays in an NHL season.

Not in this town. And not when the head coach we’re talking about is Maurice.

The angry emails, tweets and online comments began flying within minutes of my column being posted online Friday afternoon and continued unabated for much of the next 36 hours:

“This paper doesn’t need writers like you please find a different job.” “Please send him back to curling where he belongs.” “A complete joke.” “You need to check your take on hockey and think about writing about something in your wheel house tiddlywinks maybe.” “I read your article and you really made me angry.” “You are so full of Schitz Creek.” “Did you even watch the game?” “Are you even a fan?” “So glad I wasted my 27 cents on this article.” “Nice hair though.” “You should talk to your parents about your spanking issues its starting to affect your work.” “You are much better suited to a small curling venue in rural Manitoba than you are to the big stage.”

So, a few things.

I have two things to say to the idea that I’m a hack who has been stealing a paycheque from this paper for the better part of 30 years: 1) Tell me something I don’t know; and 2) Shhhhhh.

First, go easy on the shampoo and apply a little Moroccan oil once a day. You’re welcome.

Second, curling doesn’t want me either. My all-time favourite bit of hate mail began, “Once again, Paul Wiecek has used his curling column for evil instead of good.” Every word of that sentence is comedy perfection, albeit unintentional. I think.

Third, maybe I’m old fashioned, but I think the idea that I should be fired and/or die of cancer simply because I expressed an opinion about your favourite sports team different than your own seems a bit disproportionate.

And fourth, I have two things to say to the idea that I’m a hack who has been stealing a paycheque from this paper for the better part of 30 years: 1) Tell me something I don’t know; and 2) Shhhhhh.

It is a monument to just how beloved Maurice still is in this town that even the hint of a suggestion that he might have a role in what is looking like a lost season for the Jets would engender such a visceral reaction.

Because, really, if you don’t believe that, what do you believe? That Maurice has had no role in how the Jets have played this season? I’d argue that’s a much more damning indictment than anything I wrote on Saturday.

Now, perhaps there’s a third rail in play here, something along the lines of: “Yes, I believe Maurice played a role in how the Jets have played this season, but only the good parts.”

If that’s the razor’s edge you’re tightrope-walking, I’d encourage the purchase of a sturdy net.

The other criticism I got a lot of over the weekend was that I completely failed to understand how important it was that Maurice stand up for his players last Thursday in Tampa, even if it meant getting penalized and ultimately ejected from the game after the referees failed to call a penalty for that hit on Bryan Little.

And what’s more, the critics pointed out, Maurice’s outburst worked: The resulting “confidence fairy” (my description, not theirs) sparked a third-period comeback that saw the Jets earn a point against Tampa.

Lost in that analysis, however, is the fact the Lightning scored another goal and extended their lead to 4-1 after Maurice was ejected.

So, was the fairy running a bit late? And maybe she had another engagement to get to at the same time as Tampa was winning the shootout?

Facts can be so inconvenient sometimes.

Look, I get that the default reaction these days — in sports, in life and, especially, on Twitter — is to scream and yell whenever someone disagrees with you. But that doesn’t make it right. Nothing good, in my view, has ever come from throwing a tantrum in public. Sister Calista taught me that in kindergarten. It still holds up.

Here’s a little bit of context to illustrate how unique Maurice’s apparently unimpeachable position in this community is right now:

Based on the last two seasons, I predict with confidence that sometime during the first quarter of the first Winnipeg Blue Bombers game of the 2016 season, I’m going to start getting emails from people furious that Bombers head coach Mike O’Shea is wearing shorts on the sidelines.

Mike O’Shea cannot wear shorts without being blamed for a quarter century of Bombers futility, but Paul Maurice can preside over the most penalized team in the league over the last two seasons and the reaction is, “Move along — nothing to see here.”

So just to review then: Mike O’Shea cannot wear shorts without being blamed for a quarter century of Bombers futility, but Paul Maurice can preside over the most penalized team in the league over the last two seasons and the reaction is, “Move along — nothing to see here.”

Whatever magic potion Maurice is drinking, the Bombers need to purchase a 55-gallon drum of it — and a very large straw — for O’Shea.

Now, make no mistake, I think Maurice is, by a mile, the most intelligent head coach I’ve covered in this city. (Tim Burke was the funniest, Hal Lanier had the best stories and O’Shea is definitely the guy you’d want on your wing in a bar brawl.)

But I also believe it to be a no-brainer that Maurice bears some responsibility for the fact his team is continuing to undermine otherwise competitive play at even strength with a fatal mixture of too many penalties and terrible special teams.

And so does Maurice — he’s said over and over again this season that the buck stops with him.

The game winner in a 3-1 Florida Panthers win over the Jets Saturday night? It came with a Jet in the penalty box. Of course. Again.

Now, such are the vagaries of committing journalism in the age of the Internet mob that you often get criticized not for what you wrote, but what others say you wrote. And so it was that I also had all kinds of people calling me a knucklehead for saying on Saturday that I think Maurice should be fired.

I not only didn’t write that, I wrote nothing even remotely resembling that. And I don’t believe that.

But I will leave this here, without comment: A Minnesota Wild team that lost 13 of 14 games has now won four in a row and is right back in the playoff race since firing head coach Mike Yeo, a man who was once as unassailable in the Twin Cities as Maurice is here.

The bottom line: In a season in which frustrated Jets fans have grown increasingly vocal in their criticism of GM Kevin Cheveldayoff and some individual players (I’d strongly recommend Mark Stuart never, ever go on Twitter again), a large and very loud segment of hockey fans in this town is still very much buying into what Paul Maurice is selling.

What isn’t nearly as clear — at least in my mind — is whether his team is, too.

You were saying something about blame, coach? 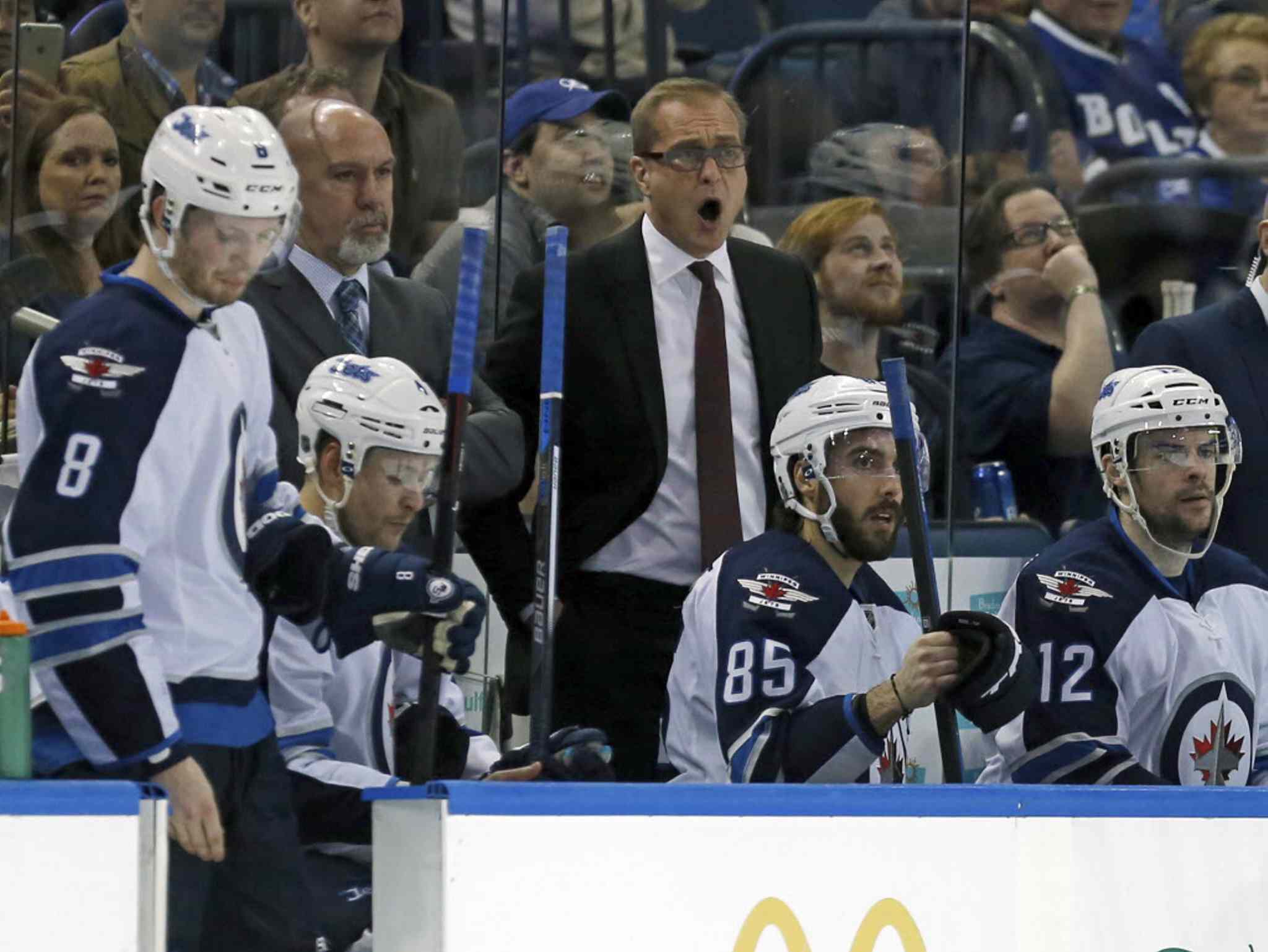