Clearing a path to Churchill

CHURCHILL — Peering out the window of a propeller plane, Remi Foubert-Allen looks at the barren tundra between his hometown of Churchill and Gillam. Amid frozen lakes and clusters of birch trees, he sees opportunity.

CHURCHILL — Peering out the window of a propeller plane, Remi Foubert-Allen looks at the barren tundra between his hometown of Churchill and Gillam. Amid frozen lakes and clusters of birch trees, he sees opportunity.

“I’ve been put in a position, thankfully, that I feel I can help out our small little town,” says the ambitious 26-year-old, who today is launching a temporary lifeline for Manitoba’s Arctic port. “I want nothing more than to see the community succeed.”

Foubert-Allen is leading a crew of employees from Gillam north to Churchill, carving out an overland path for specialized vehicles along the frozen muskeg, at some points running parallel to the Hudson Bay Railway, which washed out in multiple sections this May.

By next month, that path will allow machinery, building supplies and food to reach the town of 900. The convoys will arrive as often as every three days, at a cost much cheaper than existing flights. They’ll also send up materials that can’t easily fit on existing flights, such as residents’ cars stranded down south.

The first journey kicks off today, after weeks of plotting out a trail, which can now be seen on the commercial flights to Churchill. Employees are still plowing snow along the trail with lightweight machines called groomers, which are wide-track machines used by ski hills.

They are flooding dips in the ground with water that will freeze and create a somewhat stable trail that can be accessed by specialized vehicles. The trail will span lakes, rivers, the boreal forest, tundra and taiga, until it reaches the Hudson Bay coastline.

The 270-kilometre trek is expected to take 30 hours, at an average cruising speed of about 10 km/h.

Today’s trek is the first, and Foubert-Allen anticipates a journey of two and a half days, though they might reach Churchill by Monday.

They’ll let the trail sit over Christmas, so the flooded parts freeze firm and the relocated snow settles into place. They’ll then be using Foremost Delta 3 vehicles, which look like a cross between a fire engine and an army tank, using monster-truck tires.

The project will employ at least 24 people this winter, mostly locals. Foubert-Allen envisions the line running on 70-hour cycles, with 30-hour trips and some moments to unload on each end.

Each journey will have drivers work in eight-hour shifts, with one sleeping while the other one drives, plus some support staff. The trucks are equipped with heat, radios, GPS devices and a small area to cook food.

“You have to be mentally and physically strong; it’s not for the weak,” said, Foubert-Allen, who’s done similar deliveries in northern Manitoba.

“After doing two or three days of hauling, a simple task like changing a tire or fixing a broken hydraulic line becomes a huge job.”

He credits his grit with two years working in Alberta oil sands, which allowed him to buy a home in Churchill, where his great-grandfather settled in 1929.

“I know people have their doubts, but we’ll prove them wrong. I think we have a pretty good team behind us,” said Foubert-Allen, who expects to turn 27 somewhere along the trail, on Jan. 17.

These trails were commonly known as “cat trails” in the 1960s, because they were used by Caterpillar-brand construction vehicles. They’re still common in parts of the Arctic, and used on Antarctica.

They differ from ice roads, which is when lakes naturally freeze solid and vehicles — sometimes including large trucks — can cross them.

Residents have welcomed the news with so much enthusiasm the Town of Churchill put out a statement Friday, warning residents the trail is only meant for specialized vehicles.

This morning, the Fox Lake Cree First Nation is hosting a traditional ceremony to open the road.

He’s promised the group he will respect their land. “Come summertime, I don’t want anyone to see a trace that we were there. I’m gonna have to look at that for the rest of my life,” he said. “The tundra’s very sensitive.”

The project is being run by Remote Area Services, in connection with Winnipeg-based Polar Industries, which has helped craft specialized sleighs for the route.

Last month, the federal government pledged $100,000 for the project, through the Churchill Region Economic Development grant, which Ottawa launched in late 2016 to backstop job loses, after layoffs at the Port of Churchill.

Currently, freight shipments from Winnipeg cost $1.14 per pound, or $1.05/lbs. from Thompson. That’s three times the price of shipping goods by train, and more than double what Foubert-Allen believes his group will charge.

“It’s all part of a strategy, to give people in Churchill some hope,” said Carr, who handed the cheque to Foubert-Allen earlier this month on a visit to Churchill.

“That was a highlight of me, of that trip, was meeting him, seeing his equipment, and hearing his passion.”

Churchill has long been a services hub for Nunavut’s western Kivalliq region, which local companies used to supply by buying goods in Winnipeg and transferring them along the rail line to barge shipments.

Foubert-Allen’s goal is to run a similar route north to Arviat next year, though he says Nunavut poses more of a challenge.

“Once you’re halfway between Churchill and Arviat, you’re on the moon,” he said, explaining that without any trees, only GPS devices can distinguish between the ground and Hudson Bay.

By giving employees practice along this year’s easier track, Foubert-Allen hopes to provide years of winter employment to people who rely on the summer port seasons and autumn tourism.

Carr said such a route would be part of Canada’s longer-term Arctic strategy.

“There’s all kind of potential developing north of Churchill, and people are thinking more and more seriously about it,” he said. “Some modest investment can make a big difference.”

Foubert-Allen had planned a route to Nunavut as his original goal, but a month after May’s washout, he started planning a possible route between Gillam and Churchill, with his father Dwight.

“We just kept it extremely quiet, until we knew the rail line was not going to be fixed,” he says. “Being born-and-raised locals, we didn’t want to divert any attention and much-needed publicity away from the rail line.”

He’s still optimistic the railway and port will be in local hands by the spring, and repaired shortly after.

“I’m still hoping that by the 2018 summertime, I’ll be greeting waves of smiling tourists as they step off the train,” he said. “This isn’t a permanent solution, but we got a Band-Aid one.” 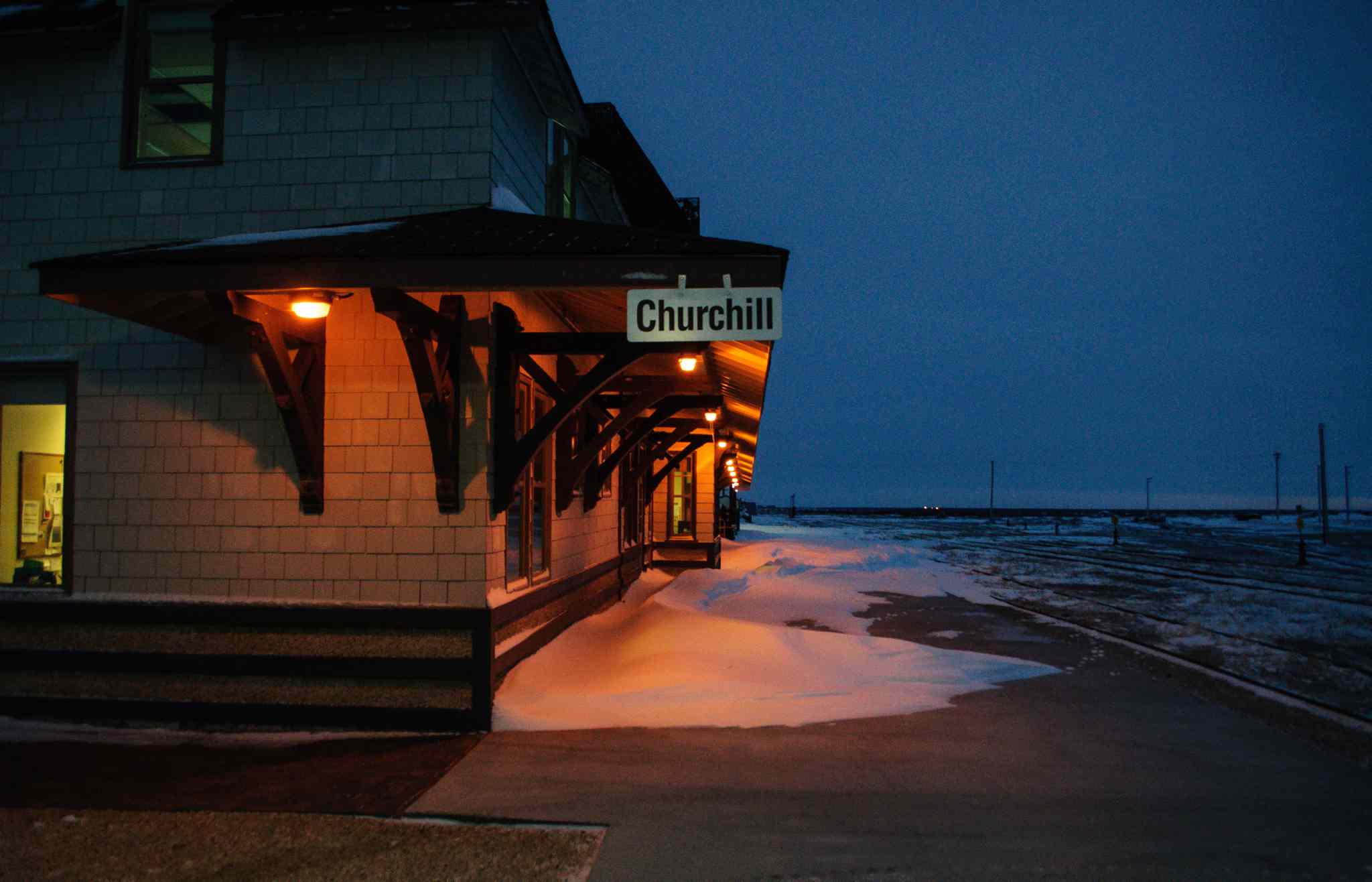 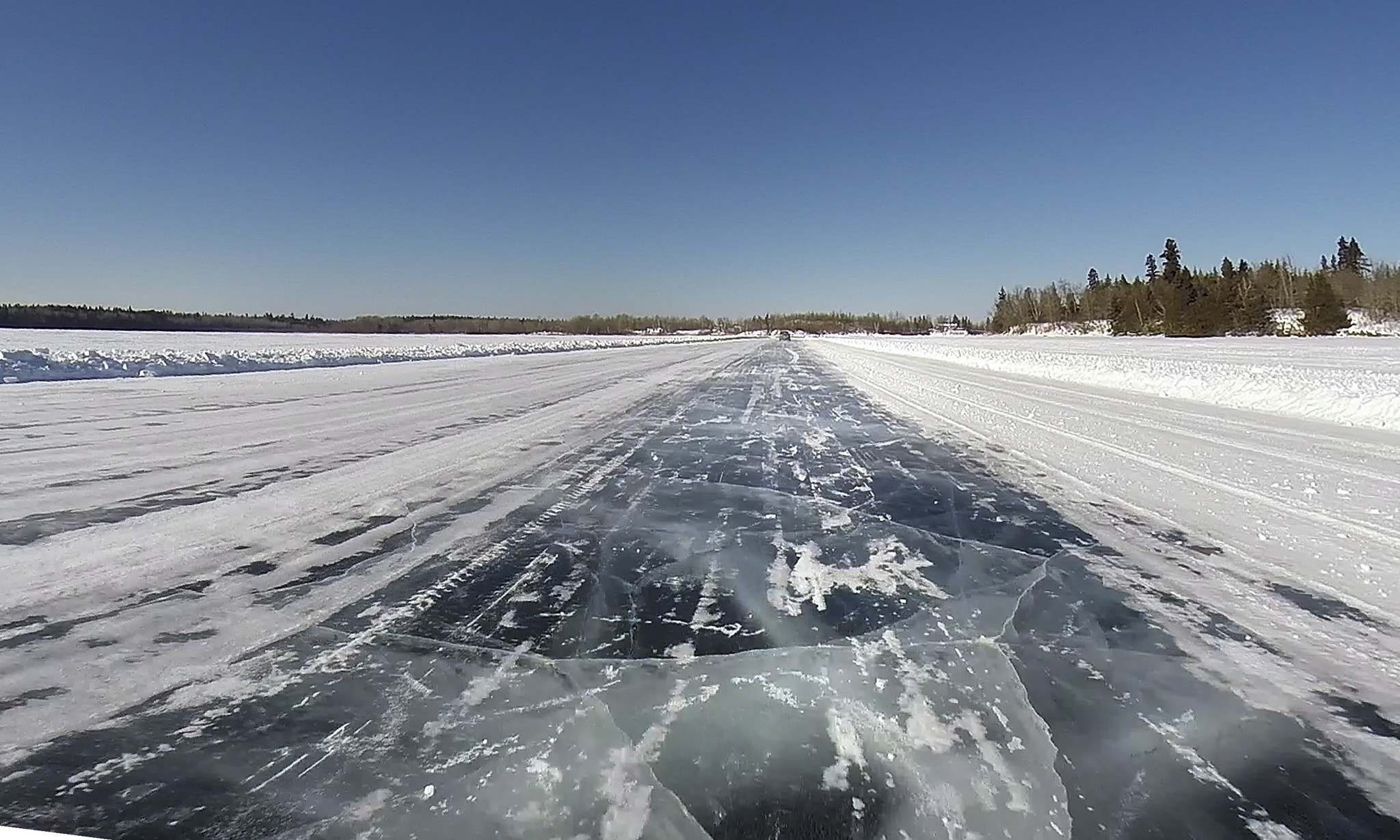