ESPOO, Finland - The stars of women's hockey have a loud voice in shaping the future of their league in North America. They vow to use it when the women's world championship concludes in Finland.

ESPOO, Finland – The stars of women’s hockey have a loud voice in shaping the future of their league in North America. They vow to use it when the women’s world championship concludes in Finland.

The six-team Canadian Women Hockey League abruptly announced Sunday — just five days before the world championship opens — that it will fold after 12 years. The NWHL subsequently declared it will expand into Canada, adding two teams to the current five located in the United States.

Those developments not only impact the 40 CWHL and NWHL players skating in Espoo, but also their countrywomen who would seek a place to play when their college and university careers are over.

Eighteen of 23 players on Canada’s roster, six from the U.S., and two from both Finland and Japan played in the CWHL this past season.

“When the time comes, we’re going to stick together,” Poulin said Wednesday at Metro Areena.

“Obviously there’s going to be two weeks now where we’re going to focus on the world championship. It’s going to be huge for us for the next couple months to come out strong and stick together.

“Not only Canada, but the U.S., Finland, Sweden, everyone.”

Calls for one women’s professional league in North America instead of two have grown in volume over the last year. One league’s dissolution opens that door, but is women’s hockey ready walk through it?

“I hope so,” said American forward Hilary Knight, who was Poulin’s linemate in Montreal. “It’s no secret that resources were getting dispersed between two leagues.”

For the players who have put time, energy and sweat into their CWHL team, the loss the loss of the league felt like a heavy price to pay.

“I think the reason we’re all so devastated our league is gone is because we love it so much,” Jenner said.

“We’re focused on this tournament right now, but certainly as an international player group, we have a lot to think about in the off-season. I think our power comes from being united as a group.”

The world championship schedule of games, practices and recovery leaves little time for an international mobilizing of players, Jenner said.

“Plans for future conversations can certainly happen,” Jenner said. “The communications lines are open between the teams here.”

The Americans have experience flexing their collective power.

Prior to the 2017 world championship in Plymouth, Mich., the U.S. players threatened to boycott the tournament if USA Hockey didn’t provide more financial and competitive support for the national women’s team.

The women won several concessions from their federation.

“As long as our national-team girls, the U.S. and Canada are sticking together, I think it shows a lot,” said U.S. forward Brianna Decker, who played for the Inferno this past season.

“I think that what’s we’re striving for is one league. It’s disappointing about the CWHL. They put so much work and effort into growing our sport and growing our game.

“I hope that something bigger and better (is coming). There obviously is a lot of unknown right now.”

How much of the CWHL the NWHL would be willing to absorb and preserve is one of multiple questions running through players’ heads.

While the NWHL declared its interest in the Toronto and Montreal markets, the general managers from the six CWHL clubs said jointly in a statement that “there are currently no negotiations occurring between any former CWHL teams and the NWHL.”

An NWHL spokesman said commissioner Dani Rylan will not give interviews on the subject during the world championship.

“She respects that they want to take some time to decompress and consider all of their options.”

The prospect of losing what the Les Canadiennes have built in Montreal, where they have a close relationship with and wear the colours of the NHL’s Canadiens, worries Caroline Ouellette.

The four-time Olympic gold medallist played for Les Canadiennes before retiring last year and stepping behind the bench. Ouellette is one of Canada’s assistant coaches in Espoo.

“The saddest thing for me is thinking about my GM and everything she’s done for 12 years and not knowing what’s going to happen for her,” Ouellette said.

“I’m know I’m going to keep pushing so we can keep Les Canadiennes in Montreal and keep having the organization that we’ve had.”

She echoed the need for the world’s high-profile players to get involved as soon as possible to get the league they want.

“I think one hundred per cent the players know they are the ones holding the power,” Ouellette said. “They know the game is going to take the direction that they want it to take.”

With the most CWHL players on its roster, Canada is taking the biggest emotional wallop from the loss of the league.

“The other message we sent is the whole thing would be a lot easier to deal with if we’re dealing with it when we have a gold medal around our necks.” 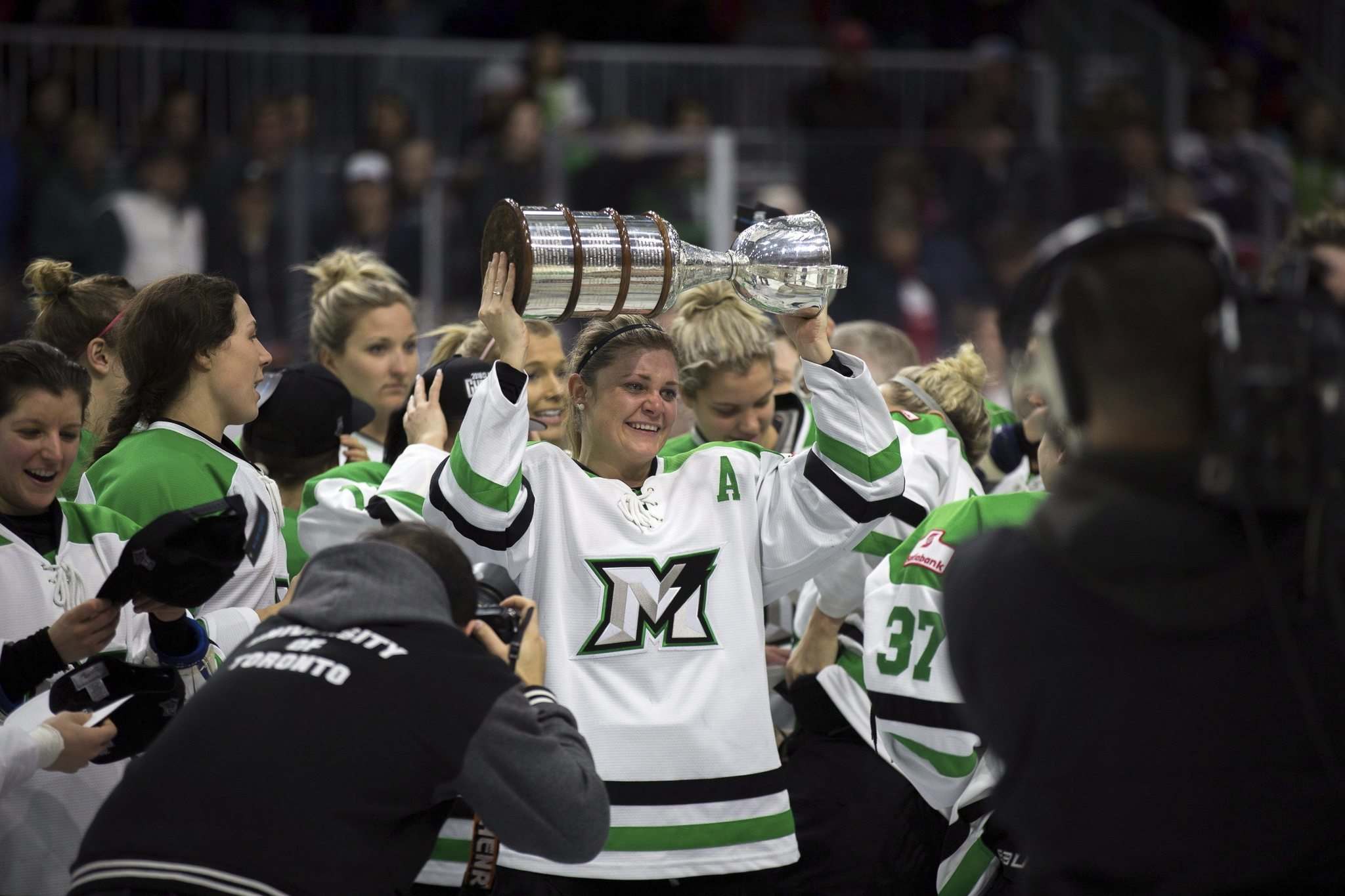