Will the real Winnipeg Jets please stand up.

Will the real Winnipeg Jets please stand up.

Not even two weeks into the regular-season and it’s already been a bit of a roller-coaster ride: one night they look like world beaters who might be able to contend for the Stanley Cup, the next, like basement dwellers who could be in the running for a lottery draft pick.

The end result is a 4-3-0 overall record, along with plenty of questions about who and what they really are.

Are they the group that saw a shoddy goaltending performance spoil an otherwise strong opening-night effort in New York? Or the one where Connor Hellebuyck’s stood tall in a home-opener against Minnesota followed by an impressive road victory in Chicago?

Are they the club that mounted an improbable, character-building comeback from a 4-0 deficit in New Jersey to capture their first win of the regular season? Or the one that pretty much no-showed a couple nights later in a lacklustre loss on Long Island?

Are they the team that limped into Pittsburgh with a patchwork blue-line and skated away with two impressive points, or the one that was pummelled in their own rink later in the week by the very same Penguins?

The answer, it seems, may be all of the above. There’s no question the Jets, as currently constructed, have plenty of warts, but they also have enough elite talent to overcome them on any given night, as we’ve already seen.

That likely means a season filled with plenty more ups and downs, which is why fans might be wise to ensure their tray tables are upright and seat belts are secured as they follow this Jekyll and Hyde group.

“You know what, don’t take this game as permanent,” coach Paul Maurice said following Sunday’s disappointing 7-2 defeat to Pittsburgh at Bell MTS Place. “We had a tough night tonight. We’ve been a pretty damn good team. We weren’t tonight. I’m leaving it.”

I’d suggest the Jets have been a pretty damn inconsistent team still searching for an identity, which shouldn’t come as a huge surprise, considering the major roster turnover.

Rome wasn’t built in a day, and neither was a hockey club that is without numerous key pieces from the end of last season including Jacob Trouba, Dustin Byfuglien, Tyler Myers, Ben Chiarot, Kevin Hayes, Brandon Tanev and a pair of injured players in Bryan Little and Nathan Beaulieu.

One of the major areas of concern going forward is going to be the reliance on the top players to carry the load. There’s no question Mark Scheifele, Blake Wheeler, Patrik Laine, Kyle Connor, Nikolaj Ehlers and Josh Morrissey are going to be leaned on more than ever this season.

Laine (3G, 8A) is in the running for the NHL scoring lead, with Scheifele (3G, 7A) right behind him. Ehlers (2G, 5A) appears to have found another gear, while Wheeler (3G, 3A) appears set for another big year. Morrissey (0G, 4A) missed a pair of games due to injury, while Connor (2G, 1A) has shown flashes of his old self after missing all of training camp due to a contract dispute that appears to have impacted him.

There have been some impressive early returns with 13 goals and 28 assists between them, but there have also been nights like Sunday, where that group looked completely burned out.

Consider: those six players were a combined minus-18 against the Penguins, which would be a great result if you were competing for the coveted green jacket at Augusta but is very much frowned upon at a hockey rink.

“So this is what I’ll take from this game: I’ve had a number of guys I’ve run real hard, and while they were working it was a tough night for them,” is how Maurice put it during his post-game availability.

The Jets have been the NHL’s busiest team to start the season, already up to a league-leading seven games played before a handful of clubs had even played their fourth. That includes five of the first six on the road, and two sets of back-to-back games. It has also included virtually no practice time, which isn’t ideal when you’re trying to bring a number of new faces together for a common cause.

That’s why this next stretch is so important. Following Sunday’s unpleasant visit from the Penguins, the Jets are home for four more games over the next 12 days. That will include plenty of time to not only sleep in their own beds, but work on the all-important X’s and O’s that seem to be lacking in several areas.

And, continuing a bit of an early-season trend, the Jets aren’t exactly facing teams expected to be NHL heavyweights. Visits from Arizona, the New York Islanders, Edmonton and Los Angeles are on deck, before the schedule starts to get considerably tougher beginning with the Heritage Classic game in Regina against the Calgary Flames.

The power play and penalty kill should be major areas of focus, as the Jets have been woeful in both departments. In a league where the line between success and failure can be razor-thin, strong special teams can be a difference-maker. Fortunately, the Jets have been solid at five-on-five play, which has helped them stay above water, so far.

Then there’s the play of Hellebuyck, which seems to be back on track following a rough pre-season and tough first regular-season night at the office. He’s had three strong starts since — 107 shots, 102 saves, three victories — and will get the chance to carry the ball here for a bit with plenty of time for rest and recovery between games.

Just like the core group of skaters, the No. 1 netminder will go a long way to determining how this season turns out for him and his teammates.

Sunday’s stinker aside, winning four of the first seven is nothing to sneeze at, and considering the early challenges Winnipeg has faced might be considered a best-case scenario. Continue playing at that rate and you’ll punch your ticket to the post-season.

“I feel it’s just an outlier. I don’t feel it’s indicative of our team. We’ve obviously been behind a fair bit this year, but we’ve stayed in the battle. We’ve fought all year. Every once and a while it’s going to go like that,” Wheeler said following the Penguins game.

Indeed, if we’ve learned anything about this group so far, expect plenty more peaks and valleys going forward.

Sluggish Jets go down 7-2 to Penguins 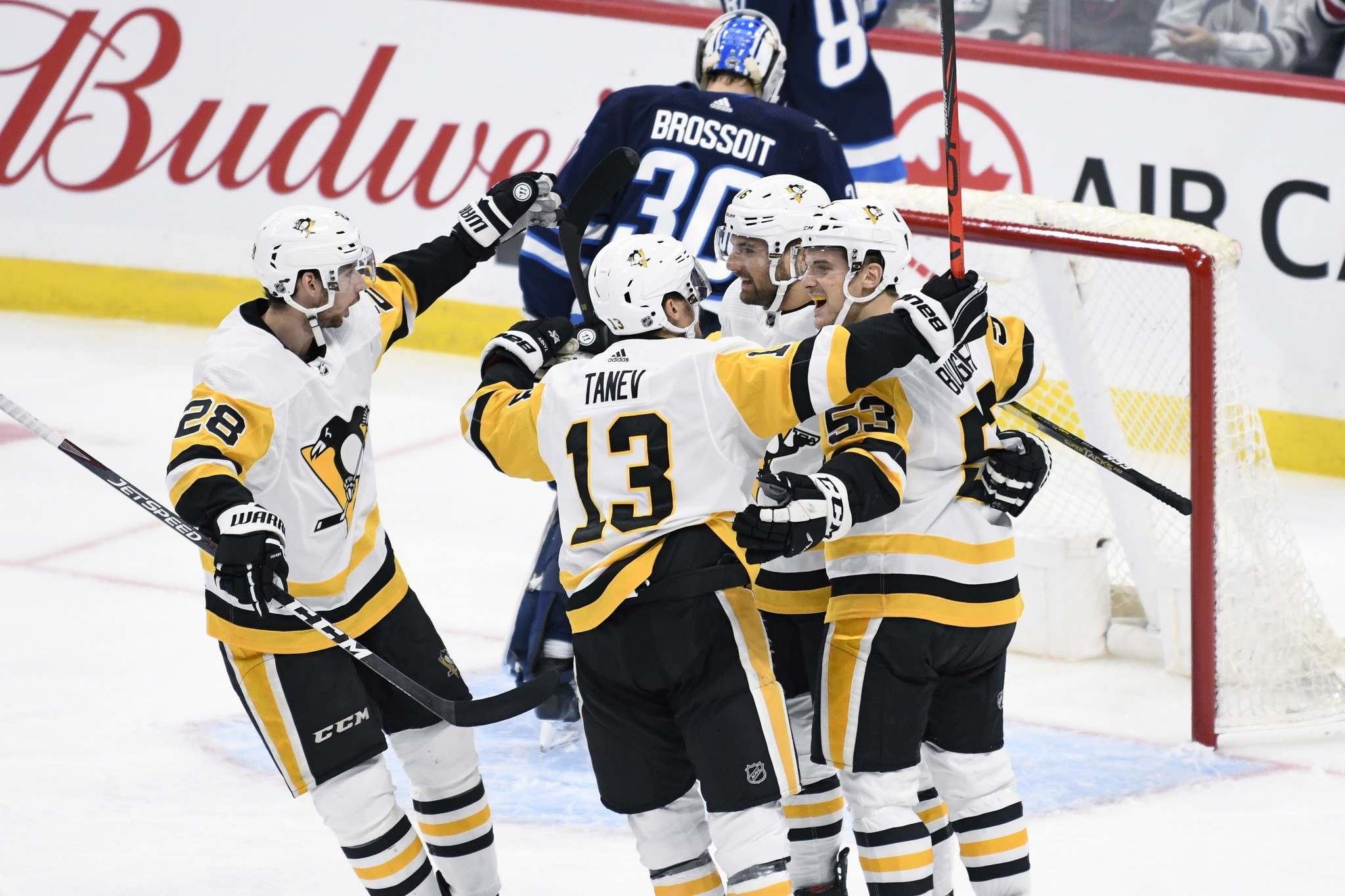 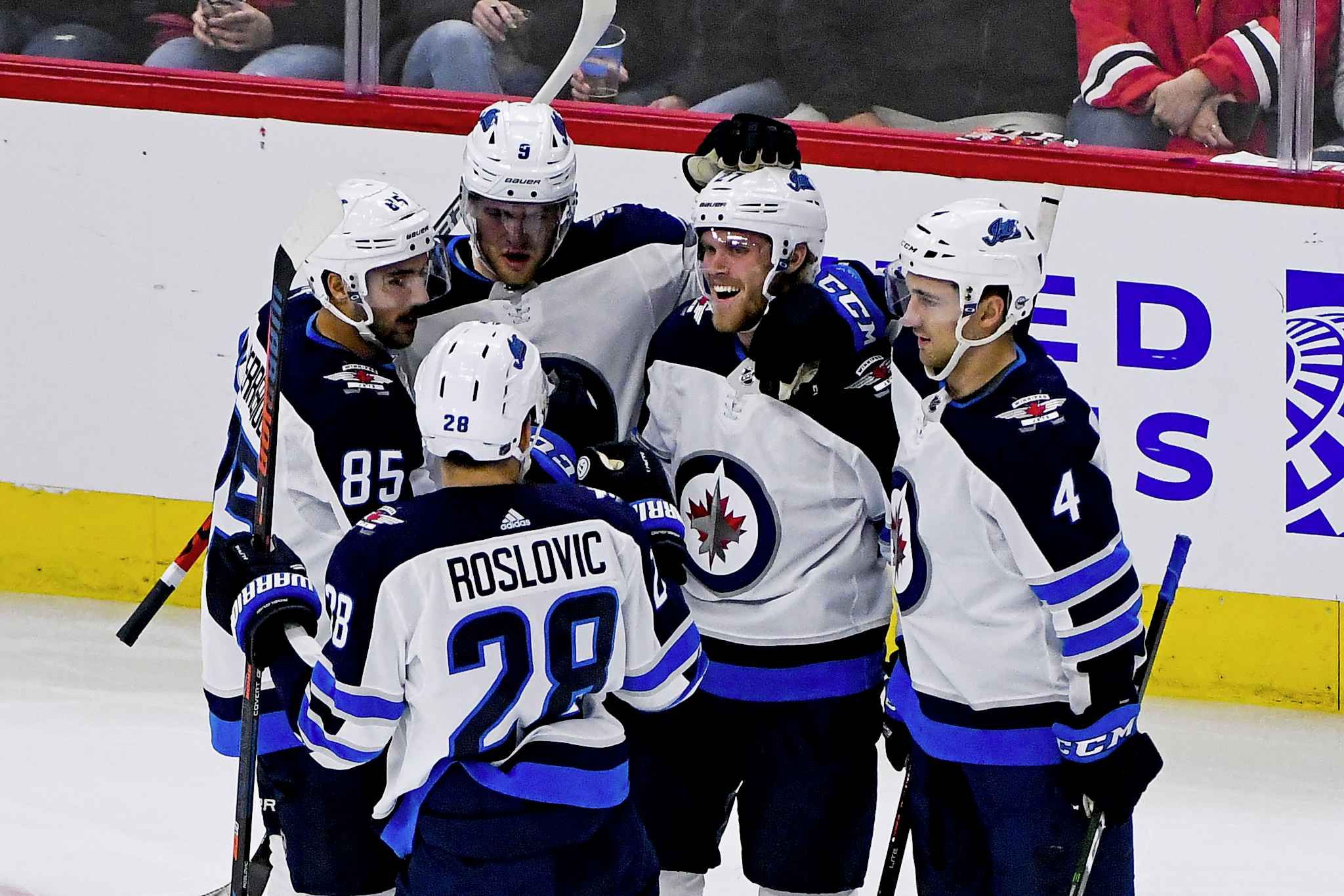