Training camps by their nature are inherently uncertain and come with a list of personnel issues for the people in charge to consider and clarify.

Training camps by their nature are inherently uncertain and come with a list of personnel issues for the people in charge to consider and clarify.

The Winnipeg Jets’ summer session has had a scant few.

It was revealed before the first skate that 13-year NHL veteran centre Bryan Little wasn’t ready to return to the team after he took a puck to the head in early November, suffering a concussion and perforated eardrum.

Anthony Bitetto’s conspicuous absence from camp was finally explained Thursday when the veteran defenceman disclosed he’d been through an extended quarantine, split between Nashville and Winnipeg, after testing positive for COVID-19 in late June.

Now, the pressing question is the status of slick, swift winger Nikolaj Ehlers, who skated briefly Saturday morning but didn’t participate in a scrimmage. He was also held out of the scrimmage Thursday. Gabriel Bourque assumed his spot on the second line with centre Cody Eakin and Patrik Laine.

Jets head coach Paul Maurice offered no real clarity on the injury, which is part of the return-to-play protocol.

“He just skated with the first group and we’re happy that he did. We’ll see where he is (Sunday),” he said. “If it was Saturday night today, possibly (he could play). I’m hopeful. Here’s my answer, all 24 teams are really hoping they can put their best players on the ice.”

Otherwise, there’s been little intrigue at the Iceplex as the Jets prepare for a best-of-five ‘play-in’ series against the Calgary Flames, with enrolment in the 16-team Stanley Cup playoffs on the line. Game 1 is Saturday, Aug. 1, with a 9:30 p.m. CT start time.

There’s been no time spent the last two weeks speculating about goaltending battles, line combinations, defensive partnerships, who’s who on special-team squads or which feisty longshot might earn a roster spot.

Maurice and his staff began the process of easing their squad back to game shape without any lingering lineup dilemmas, after a four-month recess from the rigours of the 2019-20 NHL season owing to the coronavirus pandemic shutdown.

Save for the fresh concern about Ehlers and the absence of Jansen Harkins (not fit to play, according to the coach) Saturday, Winnipeg’s a chipper, able-bodied bunch — and the lineup is set.

“The difference would be that maybe in a normal camp at the start of the year, you would probably have brought some new players in… you’re not really sure what you’re going to get until you get into the regular season. It’s almost the opposite that’s going to happen here,” said Maurice, whose team was ninth in the Western Conference (37-28-6) but had won four straight contests before the season was paused March 12.

“You’ve got a really good idea of where you were when you ended up and what your team looks like when it’s healthy, and away you go.

Vezina Trophy candidate Connor Hellebuyck (31-21-5, 2.57 GAA, 9.22 S%, six shutouts) will start every game against the Flames and Laurent Brossoit provides insurance in the event of a calamity, an injury to the No.1 goalie.

Underrated defenceman Josh Morrissey is paired with relative newcomer Dylan DeMelo. Neal Pionk, perhaps the most pleasant surprise of the year, plays alongside Dmitry Kulikov, while Nathan Beaulieu and Tucker Poolman make up the third unit.

In the case of injury, expect Maurice to turn to blue-liner Luca Sbisa and forwards Jansen Harkins and Bourque.

Falling behind early in the series, however, would call for changes to some of the aforementioned combinations.

“You’re not going to wait very long because you don’t have that kind of time. You’re not giving this five games to see if that (unit) has got it going, you’re going to have to make your adjustments very, very quickly. Make hard decisions on who is going and who is not and allocate ice time accordingly,” said Maurice. “So, while you worked your way into an NHL season with a whole bunch of unknowns, we have very few unknowns here, in terms of how we’re going to start, assuming we stay healthy. But we won’t wait very long until we make adjustments.”

Pionk said while summer camp offered little drama, it was a crucial yet self-evident step in the team’s preparedness.

“It’s a little bit different, but at the same time your mindset is the same. You’re trying to get in shape and you’re trying to get ready for Game 1,” said Pionk, who turns 25 next week. He led all Jets defencemen with 39 assists. “Whether it’s the start of the regular season or the playoffs, the idea going into any training camp is to put your best foot forward and be at your best when that first game starts.”

Scheifele said he knew exactly what to expect from the unique July workouts.

“Just back to playing hockey, that’s what it all comes down to,” he said. “During the stoppage, after one day I was ready to play again. There was a lot we had to deal with, but now that we’re playing again that’s the excitement, playing the game we love every single day. We get to compete for the Stanley Cup and that’s the ultimate dream.”

The Jets players, coaches and training/equipment staff go through another round of COVID-19 testing Sunday morning before boarding an afternoon flight to the Alberta capital.

Assuming Ehlers and Harkins make the trip, Winnipeg’s 33-man camp roster must trimmed by two bodies before the club departs.

Hear this: Jets fear no team 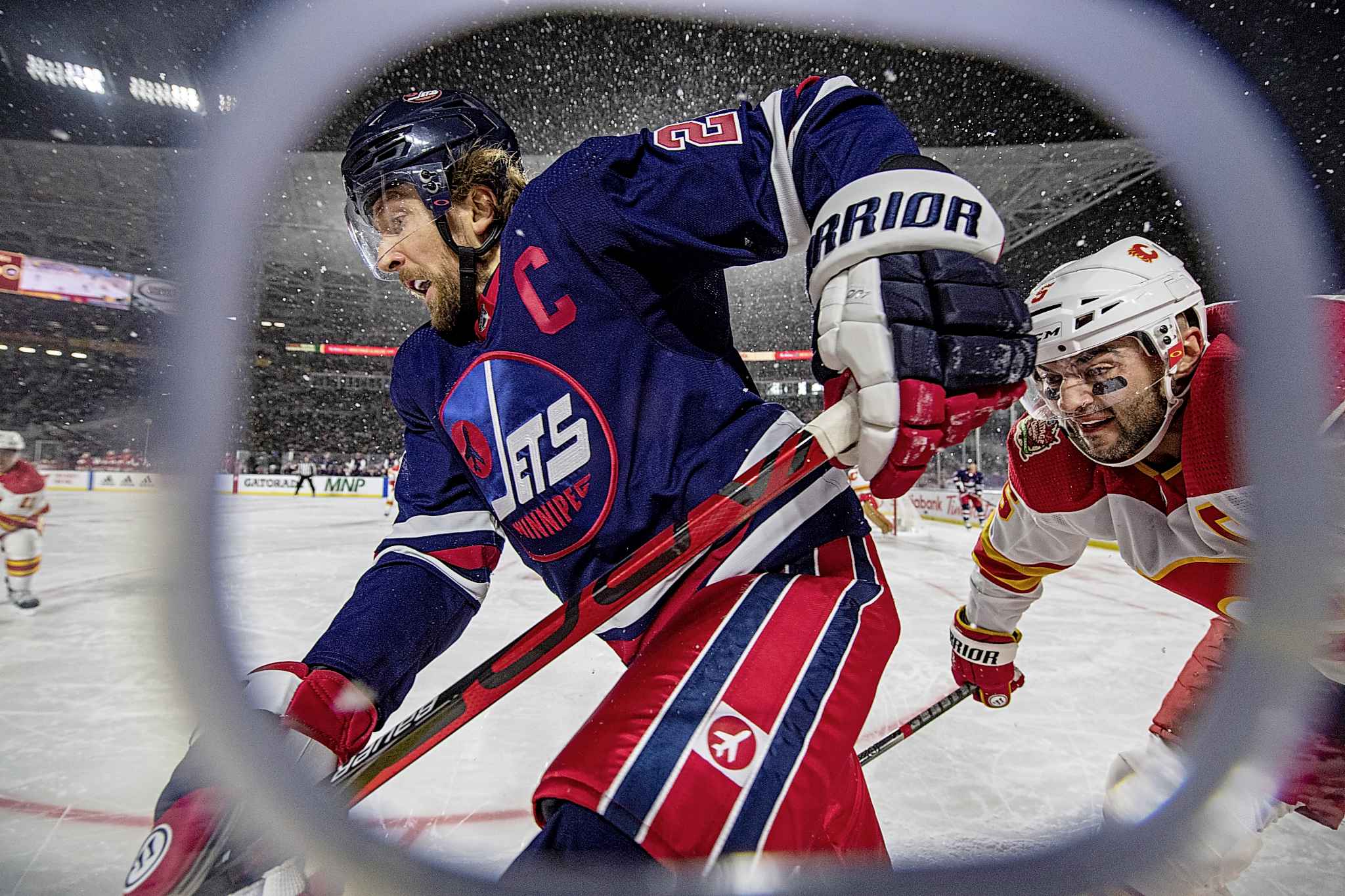