Those responsible for "scenes of chaos" at the legislature on Canada Day, including the toppling of the statues of two queens, should expect to face justice, but now is the time to "calm the waters," Manitoba's justice minister said Monday.

Those responsible for “scenes of chaos” at the legislature on Canada Day, including the toppling of the statues of two queens, should expect to face justice, but now is the time to “calm the waters,” Manitoba’s justice minister said Monday.

“All of us are tremendously saddened and dismayed at the violence, the disruption, the scenes of chaos at the legislature late into the night with property being damaged,” Cameron Friesen said Monday when asked about the toppling of the statues of Queen Victoria and Queen Elizabeth by crowds in broad daylight. “That’s troubling,” he said.

Videos of the giant statue of Queen Victoria in front of the legislature being pulled off its pedestal with rope made headline news around the world.

The head of the statue was removed and later found in the river. The toppling of the statues happened after peaceful marches led by Treaty One Nation and the Assembly of Manitoba Chiefs. First Nations leaders disavowed the vandalism and destruction, which Friesen said he appreciated.

“This is not the path forward for our province for reconciliation,” Friesen said at a press conference to announce a “sobering centre” for Thompson.

“Our path forward is built on trust and mutual respect. We must protect the path forward.” That path can’t include acts of violence and vandalism, he said.

“We are a nation of laws, we are a province of laws and we must hold accountable those who break laws,” the justice minister said. It’s been a busy time for his officials and the police, he said, “as we continue to try to get to the bottom of what happened, of why the situation deteriorated so quickly and so spectacularly,” Friesen said.

The Winnipeg Police Service declined to comment on Monday but Friesen said there is video evidence, closed-circuit TV evidence, and witnesses and officers who were at the scene are giving information, he said. “All will add to the investigative efforts which are underway to determine where charges may be laid and who may be prosecuted for those things.”

“I think that accountability matters very much,” Friesen said. So does reconciliation, and recognizing Canada’s role in the suffering of Indigenous people and the recent discovery of hundreds of unmarked graves at residential school sites.

“We need to move forward together with reconciliation, that’s where our focus must be,” he said.

On Monday, Manitoba Conservative MPs shared a letter they’d written to Premier Brian Pallister in which they call for the statues to be restored and erected as soon as possible.

“Vandalism at the legislature and the burning of places of worship in provinces across Canada are criminal acts contrary to reconciliation,” said the July 2 letter signed by the seven Conservative members of Parliament from Manitoba, Conservative Sen. Don Plett, and Kenora MP Eric Melillo.

“We cannot allow a small number of individuals to subvert our democracy or erode our democratic institutions. Therefore, we respectfully request that the statues … be repaired and restored to the legislative grounds as soon as possible.”

Friesen said that issue will be up to the ministers for culture and central services, but it is not urgent.

“Right now, I believe the province is still reeling from the knowledge of what happened at the seat of our provincial government,” said Friesen.

“We cannot allow a small number of individuals to subvert our democracy or erode our democratic institutions. Therefore, we respectfully request that the statues … be repaired and restored to the legislative grounds as soon as possible.”
– Letter from seven Conservative members of Parliament from Manitoba, Conservative Sen. Don Plett, and Kenora MP Eric Melillo

“I know that people are calling for a calming of the waters at this time,” said the MLA for Morden-Winkler. “Sometimes, in those moments of extreme emotion, it’s more important than anything to just calm the waters. Let us all work today to do that and we will find our way forward through this,” Friesen said.

“Make no mistake: those efforts that underway to investigate are important and those responsible for acts of violence and destruction will be held accountable,” he said.

In the meantime, he said it’s his job to make sure the legislature and its grounds are safe.

Friesen said the province has reached out to the “encampment” at the legislature, a group of Indigenous people who are hosting a sacred fire and healing village.

“We do everything we can to keep people safe,” said Aaliyah Leach, a youth organizer at the encampment, which has a wading pool, tents and a teepee set up near the fire. She said there’s a “misconception” about the encampment because it is close to the statues that were vandalized.

“There has been a few people and some of the public who’s been trying to shift the blame onto us,” said the Afro-Indigenous young woman. “Some people get really angry,” she said, including two “older white ladies” who were harassing an Indigenous family at the encampment. “We did not instigate any of what happened at the statues,” she said.

With moms and kids and vulnerable people visiting the sacred fire and healing village, Leach said they’re careful about who can join them. They have their own peacekeepers and a 24-hour patrol of the area on the east side of the grounds, as well as a security liaison at the legislature.

A spokeswoman for the province said damage to the statues is being assessed and it’s too soon to discuss what will happen next. She wouldn’t comment on where they’ve been taken or who is assessing the statues, citing security concerns.

NDP Leader Wab Kinew expressed concern that the issue of statues will pull the focus away from the calls to action of the Truth and Reconciliation Commission and the search for unmarked graves of residential school children.

“That is a national travesty. It’s something that’s hurt the hearts of all Canadians.”

Regarding the statues, Kinew called on the province to consult with Indigenous nations about what they’d like to see on the legislature grounds.

There’s a statue of Manitoba founder and Métis leader Louis Riel, which is “fitting” but the “romanticized representation” of a stone chief that’s part of the building is not a real reflection of the Indigenous people who’ve inhabited Manitoba since time immemorial, Kinew said.

“This is an opportunity to reflect on that and to ask ourselves how we really want the people’s building… to represent all of us?” 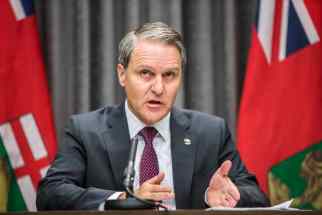 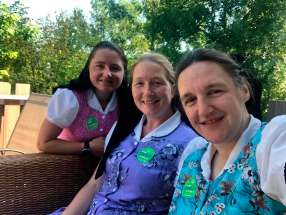 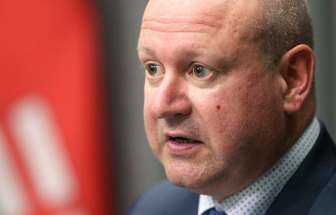 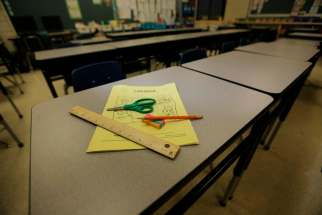 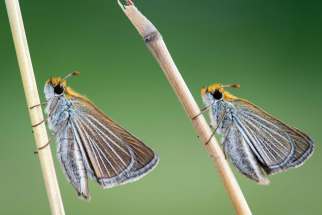 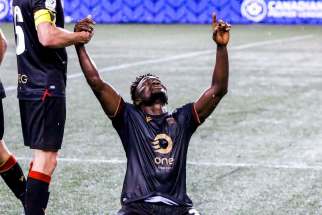 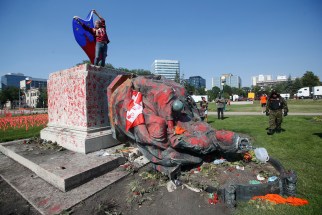