Chief provincial public health officer Dr. Brent Roussin says he has received threatening communications — by email and via social media — daily, if not weekly, as he has guided the province’s pandemic response.

However, as the third wave throttled the province, the issue became more serious.

“I’ve certainly had a number of threats against me and my family that I’ve been in contact with security and the police and have had it followed up,” Roussin said Monday.

“There’s been some suspicious activity that (has) been reported to me around my house and things that I’ve been in contact with law enforcement.”

It’s the second time Roussin has described some of the harassment he’s been subject to throughout the pandemic; the first followed media coverage of threats directed at his counterparts in other Canadian provinces.

Manitoba’s top doctor shared his experience, after being asked by media whether he may have been under surveillance by private investigators.

Earlier Monday it was revealed the president of the Justice Centre for Constitutional Freedoms, a Calgary-based firm representing seven Manitoba churches in a legal battle against public health orders, had hired private investigators to track a number of government officials.

Roussin said he was not aware of any private investigators looking into his activities.

On at least one occasion, he received a call from police regarding suspicious activity at his home, Roussin said, but declined to share additional details. He was away from the property at the time but his children and spouse were in the residence.

“It’s a little bit concerning that way, and again, it’s understandable that this has had a huge toll on Manitobans. But I don’t think that any of us can legitimately accept that threats (against) someone or their family is acceptable, no matter how much you disagree with some of the protections that we’ve put in place,” Roussin said.

“During this third wave, things have been stretching out, so I’ve been getting more and more severe ones — ones that have been reported to me that people have seen in social media, that have had some law enforcement involvement in it.”

Winnipeg police said they could not comment on whether any investigations were open, or pending, into threats directed at the chief provincial public health officer.

Roussin said seeing threatening messages escalate has been troubling, but as more Manitobans are vaccinated and as public health measures can be eased, he hopes the intimidation tactics will become a thing of the past.

“Manitobans have put us in a spot now that we’re going to be starting to loosen these restrictions, and that’s our path forward to this post-pandemic Manitoba, to this Manitoba where we don’t have Manitobans pitted against Manitobans,” he said. 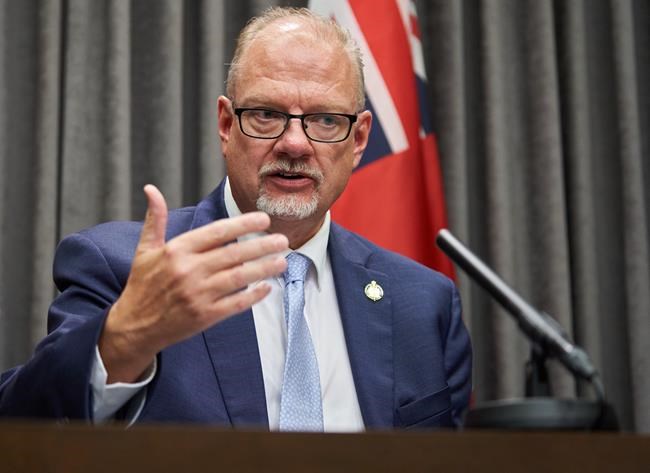