As Manitobans began to dig out from a major spring snowstorm Thursday, Environment Canada defended its dire warning and credited early precautions for saving lives.

As Manitobans began to dig out from a major spring snowstorm Thursday, Environment Canada defended its dire warning and credited early precautions for saving lives.

Before the Colorado low started moving into the province Tuesday, the national forecaster warned it could be Manitoba’s “worst blizzard in decades” by the time it moved into northern Ontario on Friday.

Its message for people to stock up and stay home appeared to raise expectations for calamity while prompting schools and businesses to announce closures before the first snowflakes fell, and the RCMP to consider shutting highways in advance.

Storm results in flurry of decisions around Passover and Easter One thing politicians can agree on: taking a snow day

“For some parts of Manitoba, it probably was (the worst blizzard in decades), where we’ve had huge amounts of snow and visibility reduced to near zero,” said Natalie Hasell, a warning preparedness meteorologist for Environment Canada. “I’d rather we had sent the warnings out instead of not telling people and horrible things happening. We’ll never know how many people we saved by taking these precautions.

“People should realize the (outcome) isn’t as bad as it is because people who need to make decisions made those decisions, and people listened and heeded those warnings.”

The behaviour of storms is difficult to predict, she said, as the different computer models used by Environment Canada “don’t always agree.”

Hasell said unconfirmed snowfall amounts reported by volunteers as of Thursday afternoon are within the range that was predicted. Some, such as 82 cm in Onanole and 60 centimetres in Killarney, are near the higher end of what was expected. Winnipeg’s total will be on the lower end of the 30 cm to 50 cm that was forecast.

Some of the highest totals reported by Environment Canada volunteers or Weatherlogics by 4 p.m. include 45 cm in Selkirk and Somerset, 40 cm in Morden and 38 cm in St. Andrews.

“It was a very different storm depending on where you are in the province,” said Hasell.

Environment Canada lifted its severe weather warnings in southern Manitoba after the worst of the storm had cleared the region by afternoon.

Hasell said the storm “stalled” over Manitoba for a time and will take longer to move out of eastern Manitoba as the four-day event ends Friday.

Snowfall warnings were still in place for parts of central and northern Manitoba, including Swan River, Grand Rapids, Poplar River and Oxford House.

Life rolled on in Winnipeg on Thursday after it avoided the worst of the April storm thanks to a lengthy break in heavy snowfall a day earlier. 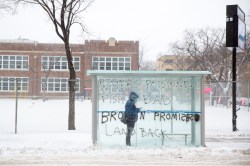 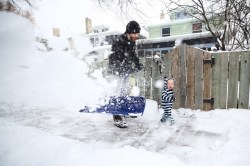 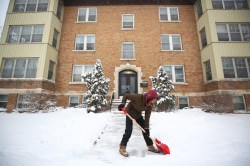 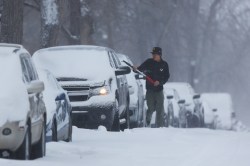 The city said it would reopen facilities and resume services in the days ahead after being closed, cancelled or suspended as a precaution.

Memes created by Winnipeggers made light of the storm, with one circulating on social media describing it as a “letdown.”

People living in rural Manitoba had a different take, however. Residents were snowed in by massive drifts or still dealing with poor visibility and highway and business closures.

“We’ve got one drift on our deck that’s five feet high and almost touching one coming off the roof,” said Deb Bauche, who lives just north of the International Peace Garden Border Crossing in southwestern Manitoba’s Turtle Mountains. “We’ve lived here for 16 years. I don’t think we’ve ever seen a storm this bad here.”

To those who think the storm wasn’t that bad, “I’d say it’s lucky it missed you,” said Bauche, who was waiting for impassable roads to be plowed. “I don’t think we’ll be getting out of here until at least Monday.”

Guy Chamberlain, who lives in Sandy Lake, about 90 kilometres northwest of Brandon, had to clear snow from a neighbour’s door so she could get out.

“In my yard, the drifts are a good three feet tall. There are snow drifts of five feet in the back lane,” he said. “I haven’t seen this much snow in well over 20 years.”

Scott Kehler, president and chief scientist at Winnipeg-based forecaster Weatherlogics, said some Manitobans may feel the storm was overblown because they didn’t experience the brunt of it after hearing the “worst blizzard in decades” warning.

Winnipeg’s wind gusts weren’t as strong and visibility not as poor as in western Manitoba, said Kehler and Hasell. Environment Canada reported gusts of 91 km/h in Brandon on Wednesday.

“The experience in the west was far more severe,” said Kehler. “Had that break in the snow, which we call a dry slot, not moved in, we probably would have ended up near 50 cm in Winnipeg.”

Even if it wasn’t the worst blizzard in a long time, said Kehler, the warning encouraged people to plan for the worst and stay safe.

Justin Oertel, who runs the Manitoba Weather Centre, said the announcement this storm could be the worst in decades rang hollow with many.

“I think we have to be careful with the wording we use,” said Oertel, who lives in Brandon. “I think it was right for them to come out and say this has the possibility of being a large storm.”

“I think by having that messaging out there early it really changed how things went,” said Courchaine. “People really seemed to plan ahead. I’m really pleased people stayed off the roads as much as possible.”

“I think by having that messaging out there early it really changed how things went. People really seemed to plan ahead. I’m really pleased people stayed off the roads as much as possible.” – RCMP spokeswoman Cpl. Julie Courchaine

She said no serious crashes had been reported as of Thursday morning, and only a small number of stranded drivers had to be rescued.

Grierson said calls to the medical transportation centre were lower than the usual volume during a major storm, which allowed crews to get to other incidents.

“We primarily attribute that to the fact people decided to stay home,” he said.

Club Regent Casino, McPhillips Station Casino and the Shark Club Gaming Centre closed for the day at 2:30 p.m.</p>
All Winnipeg and rural Liquor Marts will close at 6 p.m. on Wednesday, except for locations in Brandon, Dauphin, Flin Flon, The Pas and Thompson, which will remain open until their regular closing times. The Virden Liquor Mart closed at 4 p.m.

• The Winnipeg Police Service has resumed in-person criminal record check services this morning. The service was shut down early Wednesday because of the storm.

• The Winnipeg Regional Health Authority has cancelled services for most home-care clients this morning, unless they are high risk.

Heather Mack of CAA Manitoba said the volume of calls for help was “very light again” Thursday, which she chalked up to people staying at home.

Mack said the organization had expected about 400 calls Wednesday as most places saw the worst of the storm, but the total was 106. Of those, 83 were in Winnipeg, mostly from people needing to be pulled out of the snow.

“It was a reminder of the need to be prepared because there will be a next time,” said spokesman Bruce Owen, who encouraged people to put together a home emergency kit.

Canada Post said it will resume normal mail collection and delivery in southern Manitoba on Tuesday after issuing a red alert.

Manitoba’s flood forecasters were analyzing data and preparing to release an updated river forecast next week.

“If nothing serious happens, it looks like we overreacted. I hope people see that’s why it didn’t get that bad instead of seeing it as an overreaction.” – Jack Lindsay

Jack Lindsay, associate professor in Brandon University’s applied disaster and emergency studies department, said the warnings and precautions were the “right thing to do” to prevent situations such as children getting stuck at school in a worsening storm.

People should be “celebrating” the early measures, which were taken to protect them, he said.

As media shared Environment Canada’s pre-storm warnings, Manitobans cleared shelves Monday and Tuesday while they stocked up on food, bottled water and other supplies. The scenes were likened to panic buying in the early days of the COVID-19 pandemic.

“The pandemic, in part, got people thinking about that idea of being well supplied,” said Lindsay.

Some businesses heeded the warnings and closed early as the storm advanced.

Loren Remillard, president and CEO of the Winnipeg Chamber of Commerce, said he wasn’t hearing “a lot of distress” over the preparations.

“For a lot of businesses, their view is it’s better to be prepared,” he said. “Business understands weather forecasting is not an exact science. We should be thankful it wasn’t the full force (in Winnipeg) because we can return to business quickly.”

— with files from Katlyn Streilein

The weary and the resilient