The decapitated statue of Queen Victoria never really had a chance of returning to its spot on the front grounds of the Manitoba Legislative Building.

The decapitated statue of Queen Victoria never really had a chance of returning to its spot on the front grounds of the Manitoba Legislative Building.

The monument and what it represents — colonialism, racism, white supremacy, attempts to extinguish the original people who inhabited Canada — is no longer an acceptable symbol to be displayed prominently in front of the province’s seat of democracy.

After all, this was the monarch whose representative (Manitoba’s first lieutenant governor Adams Archibald), told Indigenous chiefs during Treaty 1 negotiations in 1871, that the Queen wanted her “red subjects” to live more like “white people” and to become “civilized” like them.

It’s unlikely Queen Victoria, the reigning monarch at the time, knew much about the numbered treaties, or the finer points of the Dominion of Canada’s subsequent attempts to assimilate Indigenous people into white, Euro-Canadian society by trying to erase their language, culture and way of living. She can hardly be blamed directly for the horrors of residential schools, the Indian Act or Ottawa’s abrogation of its treaty commitments.

Nevertheless, those things happened under her watch, until her death in 1901.

Now that the fate of the damaged statue is more or less sealed (it won’t be repaired or restored), the question of what should replace it — if anything — has re-emerged.

My colleague, Free Press columnist Melissa Martin, proposed last year that the base should be left empty, as its own piece of art, as a conversation starter and an enduring reminder of the pivotal events that occurred last year around the discovery of suspected unmarked graves at former residential schools.

It’s a powerful image. I think about it every time I walk past that empty block that is covered in red painted handprints. Leaving it as is should be given serious consideration.

However, if there is a desire to find a replacement, it should be a figure who best represents who we are as Manitobans; someone who helped create the province and fought to protect the democratic, linguistic and land rights of those living here, at a time when the federal government was trying to run roughshod over them.

Without Riel, Manitoba would have joined Canada as a territory in 1870, not a province. Ottawa’s plan was to annex it as a territory (without an elected legislature) and grant provincial status at a later, unspecified date. Riel fought to secure immediate provincial status to put Manitoba on equal footing with other provinces and to ensure those living in the Red River Settlement — mostly French and English-speaking Métis — could run for elected office before settlers from the east poured in. Because of Riel, land holdings and language rights of Red River settlers were preserved. The children of Métis families were also granted 1.4 million acres of land.

Five months into the Red River Resistance, Riel became the president of the settlement’s first elected legislative assembly (the legislative assembly of Assiniboia) prior to Manitoba’s entry into Canada on July 15, 1870. The Métis leader also suggested the name “Manitoba” (which originates from the Ojibwa word “Manito-bau,” or Great Spirit).

What better historical figure than Riel to stand prominently in front of the Manitoba Legislative Building?

There is a statue of Riel on the south side of the building, off the main grounds, facing the Assiniboine River. It’s the second statue of the Métis leader erected on the grounds. It replaced an earlier, controversial one that depicted the tortured soul of the Métis leader.

Manitoba’s legislative assembly has never properly recognized the events of 1869-1870, which led to the creation of the province. There are no plaques or educational resource material on display anywhere in the building that tell the story of the Red River Resistance, one of Canada’s most significant and fascinating historical events. The only exception is a framed photo (as part of the Speaker’s gallery) of the Legislative Assembly of Assiniboia and a descriptive plaque beside it. However, it’s displayed without context and a proper historical account of the events that led to it.

If it is decided the empty block in front of the legislative building should be filled, it would be a timely opportunity for Louis Riel to take his rightful place in front of the seat of democracy he helped shape. 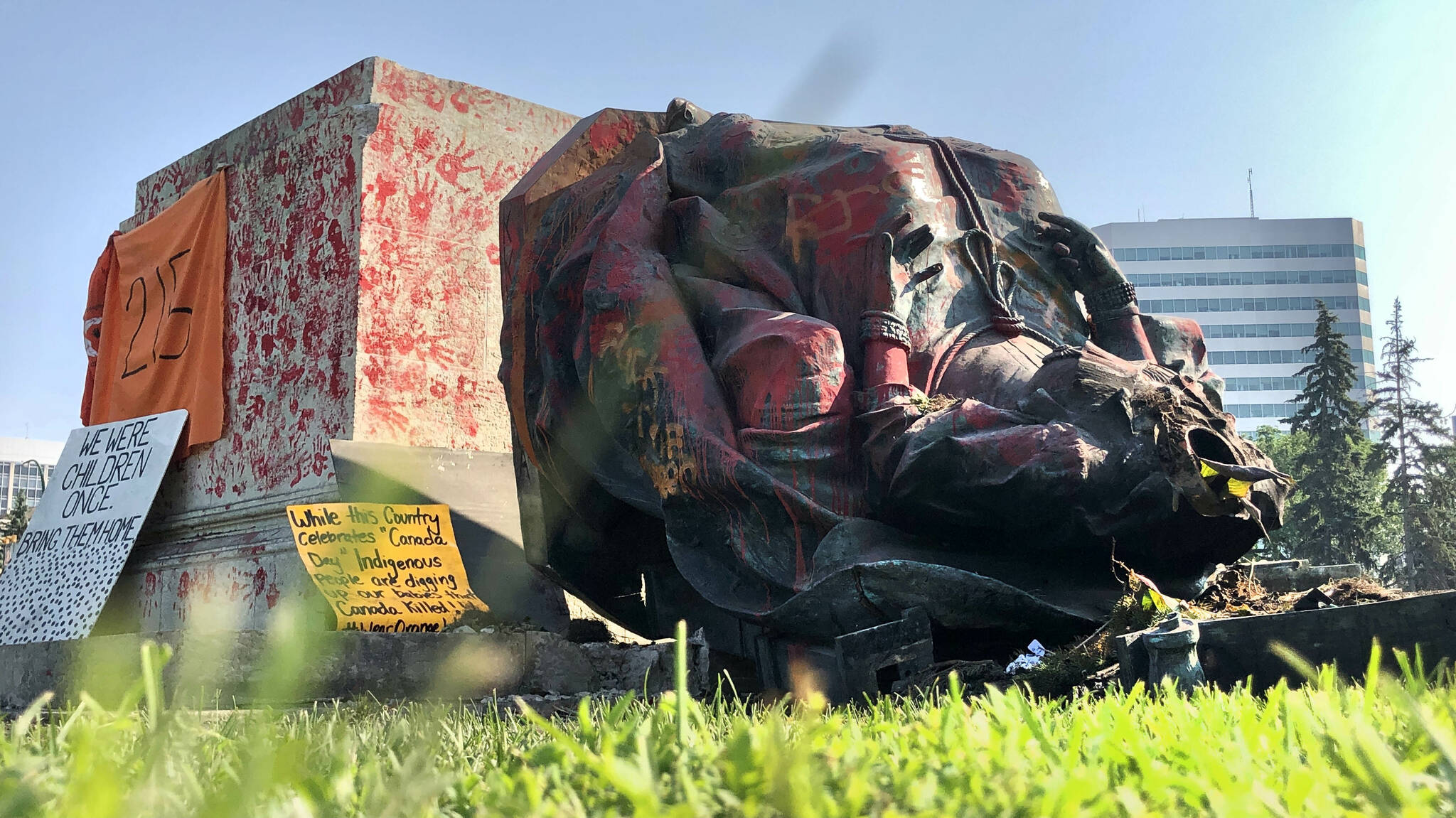 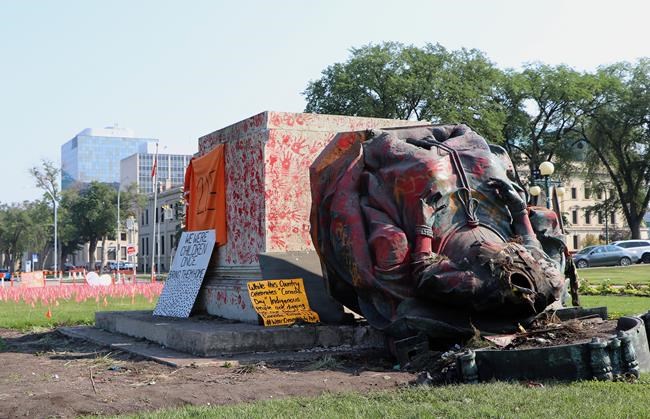 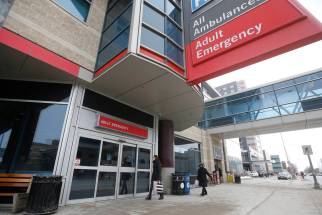 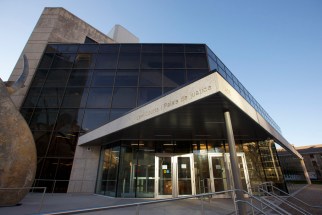 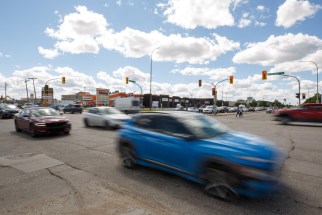 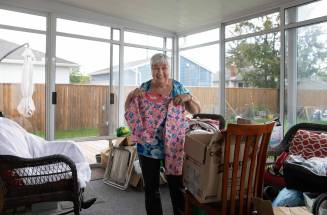 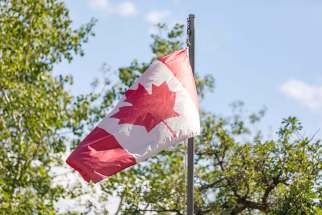 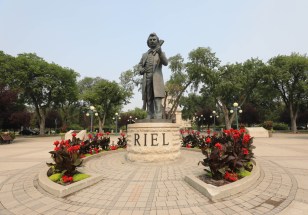 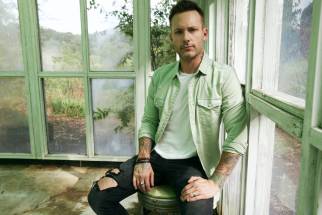 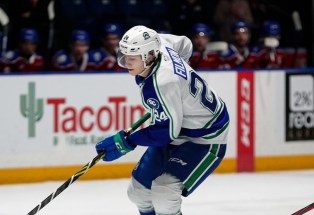 Canada Day for all, from all perspectives Come on and get some