QRs are becoming the next IT thing code mode

THEY look like barcodes on steroids -- cryptic two-dimensional configurations of geometric shapes marketing officials say will change the way companies peddle their wares and consumers live their lives.

THEY look like barcodes on steroids — cryptic two-dimensional configurations of geometric shapes marketing officials say will change the way companies peddle their wares and consumers live their lives.

They’re called QR codes — the QR stands for “quick response” — and they essentially provide smartphone users with an instant bridge between the physical world and the web world.

The codes have already started to show up in Win­nipeg in a few newspaper ads for things like the new Chevrolet Cruze and Sheps hair transplants.

But marketing experts predict the trickle will turn into a flood over the next year or two as smart­phones become increasingly popular and more companies start using websites and social media to connect with customers.

Here, in a nutshell, is how the technology works. Someone with a cellphone that’s equipped with QR-code-reader software — usually a smartphone — points the phone camera at the QR symbol and snaps a picture. The software scans the code and provides the user with a link to a website with addi­tional information about the product. That could in­clude text, videos and links to blogs or social media sites where others talk about their products.

“It’s a new way for our clients to reach their audi­ence more directly,” said Callum Beattie of Neuhaus Design, the local firm that designed the Sheps Hair Transplant ad campaign. “The benefit is that the public can get information, maps, schedules, or spe­cial deals on items or topics of interest to them in that moment of interest.”

And the potential applications don’t stop with print ads. The codes can also be used on things like billboards, business cards, bus and subway ads, product labels and even on buildings.

Want some information on that turn-of-the-cen­tury building you stumbled upon during your Sun­day afternoon stroll through the Exchange District? It could be just a click away if the building has a QR symbol on the wall.

Ditto if you want to go on a virtual tour of that house with the For Sale sign on the lawn.

“The only limit it has is the limit your imagina­tion gives it,” St.-Pierre said in an interview.

Although the codes have been in use in Japan since the mid-1990s, it’s only been in the last two or three years they’ve started to gain a foothold in North America — and even later in Canada.

Romaniuk said Cocoon has only used them a couple of times. Once was in a marketing campaign it’s developing for a local client and the other was in a promotional photo for a new line of modular furni­ture from one of its own divisions.

“They’re definitely still an emerging thing (in Winnipeg),” Romaniuk said. “Not everyone neces­sarily knows what they are yet.”

But St.-Pierre said it won’t stay that way for much longer. “I believe it’s just a matter of people getting up to speed phone-wise. A lot of people still have traditional cellphones.”

Another marketing expert said for QR codes to become mainstream in Canada, most of the cell­phones on the market are going to have to come pre-equipped with code readers. “As that becomes a standard thing… then it starts getting really excit­ing,” said Suzanne Raitt, vice-president of innova­tion and marketing for the Canadian Newspaper Association. 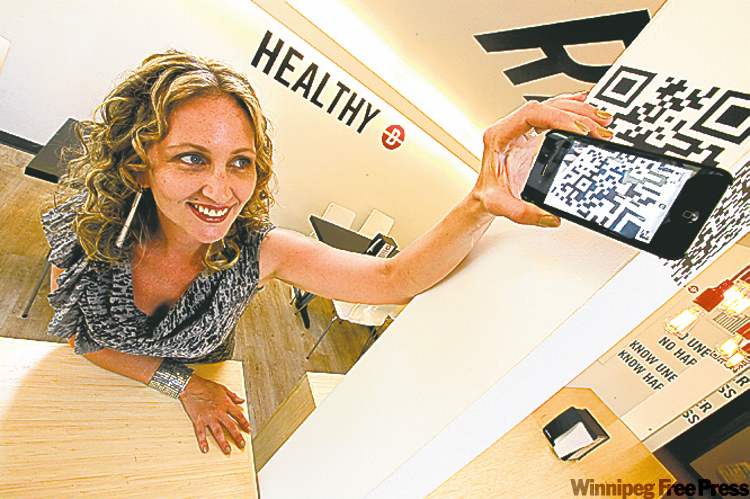