FARGO, N.D. — Heidi Heitkamp is standing onstage at a campaign rally in front of a bus newly adorned with a giant picture of her face.

FARGO, N.D. — Heidi Heitkamp is standing onstage at a campaign rally in front of a bus newly adorned with a giant picture of her face.

The U.S. senator, a first-term Democrat fighting for re-election in a solidly Republican state, is trailing in the polls. She’s about to embark on a five-day bus tour across North Dakota to get out the vote.

At the kickoff rally at Fargo’s air museum Thursday, Heitkamp tells the crowd of several hundred that with their help, she can close the gap and win the election in the final days.

“A lot of pundits, they’ve written us off. They don’t think we can do it. What do you think?” Heitkamp asks supporters, who reply by chanting, “Yes, we can.”

She introduces the event’s main attraction, calling him a “great friend.” He’s there to stump for her, a big name who can potentially pique the interest of undecided or uninterested voters as Heitkamp sets out on the 3,200-kilometre trek called “Bring it home, Heidi.”

The crowd erupts. He joins Heitkamp onstage and hugs her. A man in the crowd yells, “Give ’em hell, Joe.”

It’s one of the smallest states in the union, but it has been one of the biggest stories of the midterm elections.

The U.S. Senate race in North Dakota, a sparsely populated Prairie state with the fourth-fewest residents in the country, has been one of the contests to watch in a midterm campaign that is unprecedented in terms of national attention and spending. The Democrats are seeking to take control of both chambers of Congress, and losing Heitkamp’s seat would greatly reduce their chances of seizing the Senate.

The importance of midterms in America

Midterm elections don’t get as much attention as presidential races but can greatly affect the balance of power in Washington and across the United States.

Midterm elections don’t get as much attention as presidential races but can greatly affect the balance of power in Washington and across the United States.

Federally, the House of Representatives and one-third of the Senate are up for grabs every two years on the first Tuesday in November, with every other election occurring at the midpoint of a president’s four-year term. Senators serve six-year terms, and their elections are staggered.

Most of the nation’s 50 governors are elected in the midterms, and many elections for state legislatures and local offices are also held.

The commander-in-chief’s party nearly always loses seats in both houses of Congress in the midterms. Voters drawn to popular presidential candidates are often less interested when they’re not on the ballot, and frustration with the status quo can motivate people to vote against the party of the incumbent president.

A party must win 218 seats for majority control of the lower chamber, the House of Representatives. Fifty or 51 seats are needed to control the Senate, depending on which party the vice-president — who casts tie-breaking votes — belongs to.

In Tuesday’s midterms, all 435 seats in the House and 35 seats in the Senate (including two special elections for vacant seats) are up for grabs. The Republican party controls both chambers, and the Democrats would have to gain 23 seats to win the House and two to control the Senate. The Democrats are favoured to win the lower chamber but face a tougher challenge in the upper chamber, where they are defending 26 seats compared with the GOP’s nine.

Kelly Armstrong, a member of the state senate and the GOP candidate for North Dakota’s lone seat in the House of Representatives, led Democratic opponent Mac Schneider by a wide margin in the most recent poll. The winner will succeed Rep. Kevin Cramer, who is running for the U.S. Senate.

On a state level, both chambers of North Dakota’s legislature are being voted on, along with other positions and ballot measures. One measure would legalize recreational marijuana for people 21 and older and create a process to expunge criminal records for people convicted of cannabis crimes. The measure doesn’t set a limit for how much pot you can possess or grow at home.

Six years ago, when Heitkamp was elected to the upper chamber, she trailed in the polls but ended up winning by a slim margin, and the GOP has been eyeing her seat ever since.

Interest in this midterm battle intensified last month after Heitkamp said she was voting against confirming Brett Kavanaugh, who was accused of sexual misconduct, to the U.S. Supreme Court. She appeared on 60 Minutes. A state law requiring voters to show identification that lists their address, seen by many as targeting Native Americans living on reserves, has also drawn national media attention.

Late in the campaign, in the two weeks after Heitkamp announced she was voting against President Donald Trump’s nominee for the nation’s highest court, she collected a staggering US$12.5 million, mostly through small online donations from out-of-state residents.

Heitkamp, who was politically vulnerable long before the Kavanaugh vote, trails her opponent, Congressman Kevin Cramer, by nine per cent in the latest poll.

She had to apologize for a newspaper ad, crafted as an open letter to Cramer, that named women as victims of sexual assault and abuse. The campaign did not have all the women’s permission, and some weren’t victims.

There was talk Trump might hold another rally for Cramer in the final weeks before Tuesday’s midterms. The congressman told The Associated Press he would have loved that, but, “The perception is this race doesn’t need his resources.”

“I told Heidi a year ago I’d campaign for or against her, whichever would help the most,” Joe Biden jokes as he takes the stage.

The former vice-president and U.S. senator’s voice is hoarse from stumping for Democratic candidates across the country. Exactly one week earlier, authorities found two pipe bomb packages addressed to him, one of 15 allegedly mailed by a Florida man to Democratic politicians and prominent critics of Trump.

Speaking for nearly 45 minutes, Biden talks about “the forces of hate” that terrorized Americans in the past week. He mentions the mail bombs, the fatal shooting of two black people at a Kentucky grocery store and the mass shooting at a Pittsburgh synagogue, where 11 worshippers were killed.

“I know that sometimes it feels these days like anger and hatred and viciousness are going to overwhelm us. But it’s up to our leaders to reset the tone, to dial the temperature down, to restore some dignity to our national dialogue,” Biden says, echoing previous stump speeches and avoiding mentioning Trump.

Like Heitkamp, Biden says voting Republican would jeopardize health care and social security, and that Trump’s trade wars and tariffs are hurting farmers.

“We all know in our gut, and I mean this sincerely, there’s something different about this year’s election. Not just Heidi’s, but across the country. This is bigger than politics. I think the very character of America is on the ballot this year,” he says. “I really believe we’re in a battle for America’s soul.”

Despite an appeal to “restore dignity to the political discourse,” Biden later jokingly suggests a muscular union leader who introduced Heitkamp should show Cramer “a threshold of pain.” He is referring to remarks Cramer made this summer about having to be patient amid a trade war.

After his speech, Biden greets supporters, posing for countless photos and taking many selfies himself. He answers only one journalist’s question, when a Free Press reporter asks what he thinks about the Trump administration’s dealings with Canada.

He smiles, posing for another photograph, then turns to the reporter and pats him on the shoulder.

“I’m a great fan of the prime minister and his father before him. I knew him,” he says, then walks away.

After the rally, Heitkamp tells a group of reporters she likes Biden’s “contemplative” appeal for civility.

“After you’ve experienced having two pipe bombs sent to you, I think that you might step back and say, ‘Let’s reduce the rhetoric, let’s talk about what’s important in, maybe, a calmer way,” she says. “By all measures, if you’ve heard Joe Biden speak before, this was a pretty calm — lacking in fiery language — speech.”

Heitkamp, who co-sponsored a bipartisan bill to nullify steel and aluminum tariffs the Trump administration has imposed on Canadian products, tells the Free Press she will “continue to fight” tariffs if re-elected.

“Canada clearly is our ally, clearly is our largest trading partner, and that cross-border trade traffic is critical to our success, and Manitoba and Saskatchewan’s success,” she says.

“There are so many people who don’t vote in this country, and there’s always a chance when you inspire those people,” she says.

Steve Rodvold of Fargo says he was thrilled to see Biden.

Trump has stumped for Cramer at two events in Fargo — a rally in June and a fundraiser in September. This week, Donald Trump Jr. held a rally with Cramer in Williston, in the far northwest corner of the state. The president’s eldest child has been urging the base to vote even though his father is not on the ballot.

Trump Jr. also spoke at a Cramer fundraiser and at a petroleum conference in Fargo in September.

Fewer people vote in midterm elections, but the turnout for early voting is up in North Dakota compared with the 2014 midterms. As of Friday, the number of people who cast early ballots is more than a third of the total number of votes cast in 2014.

Outside the early polling station at the Alerus Centre in Grand Forks, retiree DeWayne Janzen, 78, says he voted for Heitkamp.

“I voted Republican last time, but I’m not happy with what’s going on in Washington,” he says. “I don’t like the way Trump lies and his rhetoric. I just don’t like it. It’s dangerous.”

“Everybody, including both of these candidates and the president, has made this a referendum on his presidency,” he said. “I’ve never seen a midterm like this. It feels much more like a presidential race in North Dakota this time than a normal midterm.”

Losing the vote in North Dakota, where the streets have no names 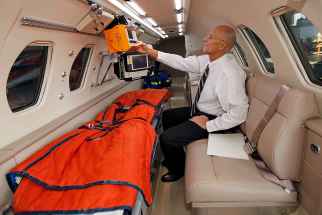 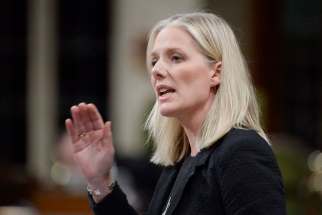 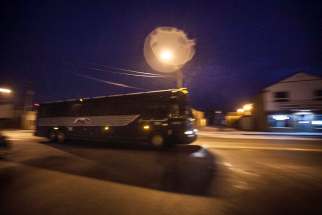 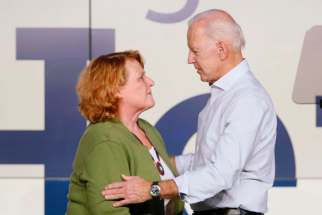 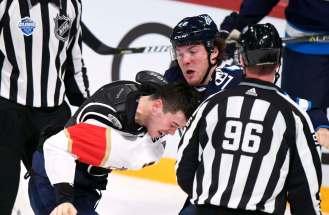 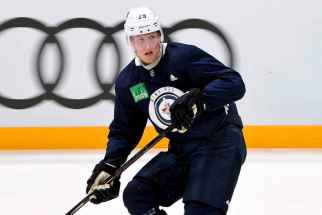 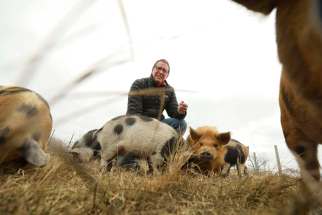 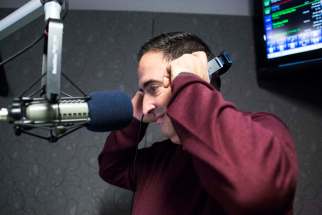 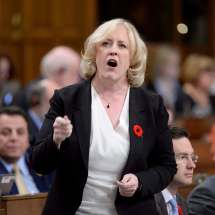 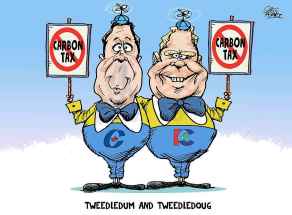