The new Exchange rate As the historic neighbourhood's population grows, business interests and residents must 'learn how to live together' By: Jessica Botelho-Urbanski  Posted: 7:00 PM CST Friday, Jan. 17, 2020

When Steve Porter moved into his Bannatyne Avenue loft in the Exchange District about 17 years ago, he had three neighbours.

When Steve Porter moved into his Bannatyne Avenue loft in the Exchange District about 17 years ago, he had three neighbours.

Today, he estimates there are 16 residential units in his building.

AHEAD BY (ALMOST) A QUARTER-CENTURY

1. To preserve the architectural character of the district.

2. To enhance the district’s vibrancy and sustainability by increasing the number of people in the Exchange.

3. To maintain the Exchange as the focus of artistic and cultural activity in the province.

4. To develop a sense of community within the district.

1. Encourage the conversion of older buildings into residential apartments.

3. Dedicate a specific theatre-cultural precinct within the Exchange and encourage expanded activities.

6. Establish a civic campus within the Exchange.

7. Identify and support an artists quarter within the Exchange.

8. Improve linkages between the Exchange District and the downtown, The Forks, St. Boniface and Point Douglas.

The Exchange District — Winnipeg’s only neighbourhood deemed a national historic site (in 1997) — has had its residential growth balloon at rates far greater than the city’s. Its commercial and educational developments continue to soar.

But it comes with growing pains. A slew of changes made to the area in 2018, such as the installation of active transportation lanes and implementation of higher street parking rates, irked business owners, who are now petitioning city hall.

Safety concerns, particularly related to a notorious Bannatyne nightclub, have been paramount.

Still, Porter said seeing the Exchange develop from “uni-culture” to “mixed-use” has been exciting.

There’s been the arrival of Red River College’s downtown campus, Skip the Dishes’ first headquarters and many other tech companies, such as video game developer Ubisoft, joining Innovation Alley.

The Exchange is teeming with people who are working, living and playing in an area historically reserved for commerce.

“We’ve reached a tipping point,” Porter said. “And we now have to learn how to live together.”

For the first time, the Exchange can really be called a neighbourhood, said Jino Distasio, a University of Winnipeg geography professor.

He remembers shopping in the area with his dad in the 1970s and ’80s; picking up a custom suit for Sunday school or buying bulk cleaning supplies in the pre-Costco era. He would visit as an urban planning student in the ’90s to seek inspiration before exams.

There weren’t people living in the Exchange until around the late 1980s, when Ashdown Warehouse opened east of Main Street, Distasio said.

The Artspace building underwent major renovations around 1985, to become the shared, six-storey studio space it is now.

Distasio said tensions between residential and commercial needs started percolating then, but are now coming in hot.

“We’ve turned a page somehow, but we’re not quite ready to face the consequences of that page turning,” he said.

“We seem to be in a post-planning era, where there is little evidence that any of the interventions of the last two years are aligned with any of the existing evidence-based plans governing the downtown or Winnipeg’s Heritage District,” the petition reads.

“The impressive, 50-year history of integrated planning in the Exchange District has waned in the last decade, creating major uncertainty about where the district is headed.”

The business owners want to see parking rates rolled back to 2017 levels; $2 per hour from the current $3.50. The move is being considered by the municipal budget working group.

They also want to see a commitment to developing a long-term vision for the Exchange, a neighbourhood that hasn’t had its strategic plan updated since 1996.

Ibrahim (Obby) Khan, a former Winnipeg Blue Bombers lineman, now owns three Shawarma Khan restaurants in the city, including his flagship on McDermot Avenue, in the Exchange. He is the muscle behind the business owners’ charge.

A self-described “eternal optimist,” Khan believes the city will fulfil their requests.

“This whole movement was started to say the Exchange is awesome. It’s always been awesome,” he said. “We just need the city to realize that again and take away the harm that (its has) done to us.”

Khan said his flagship’s sales have dropped almost 20 per cent in the past two years — over the same time period Exchange parking rates went up.

Violence at now-closed Exchange nightclub behind push for bylaw change

He is adamant there needs to be a full-scale study and overhaul of city parking rates, which peak in the Exchange and peter out in the suburbs. (The parking authority is currently conducting such analysis, which is expected back at city hall in October.)

In the meantime, parking rates in the Exchange are “penalizing” businesses who set up downtown, Khan said, as customers who are shopping in other areas, such as Corydon Avenue, Academy Road and Osborne Village, often pay nil.

The larger issue at hand is still the need for a long-term plan, he acknowledged, noting: “The health of a city is determined by its core.”

In the 1996 strategic plan for the Exchange, there were four goals and eight action strategies. Many seem to have been accomplished, at least in part.

The strategies included encouraging conversion of older buildings into residential apartments and expansion of Stephen Juba Park along Waterfront Drive.

Almost 25 years later, David Pensato, executive director of the Exchange District BIZ, is in the midst of helping develop a new long look. With help from the City of Winnipeg, Exchange businesses and residents, he hopes to make the plan public before the end of the year.

Pensato said he’s looking forward to a more sustained conversation about the Exchange’s wants and needs, rather than isolated talks that have dominated headlines regarding active transportation lanes and parking.

“The individual business owners that I’ve spoken to are pretty nuanced and are aware that there’s not any one of these things that they would point the finger at and blame,” he said.

“You’ve got a number of things that have been done without any real thought or planning all at once. Plus there’s always other external factors,” he said. “But it doesn’t help when you’re compounding the problem.”

Pensato and Coun. Vivian Santos (Point Douglas) are working closely on the new plan and discussing ways to enliven the Exchange.

Santos agreed there weren’t enough public consultations done around the onslaught of changes and advocated a “pause” until a bigger area plan is rolled out.

But she’s still pushing for more innovation, including a Shared Streets pilot project. She proposed raising three roadways (Albert and Arthur streets, and Bannatyne Avenue between Main and King streets) to be flush with adjoining sidewalks, encouraging pedestrian traffic. The public service is studying the idea and expected to bring a report back later this year.

The councillor also pushed for the budget working group to reconsider Exchange parking rates and put forward a separate motion (also still being considered) to require large liquor-serving establishments to have their business proposals OKed by city community committees.

That motion was a direct response to issues arising at now-closed Citizen Nightclub (291 Bannatyne Ave.) where shootings and stabbings around the premises scared and frustrated neighbours.

Porter lives next door, and said while he didn’t want to see Citizen shut down, he urged its owners to take small steps to be better neighbours. Those could include posting signs around the building to discourage drivers from honking and disturbing people living nearby.

Pensato said the BIZ doesn’t approve of the councillor’s motion, as it would have businesses leap another hurdle in order to gain occupancy permits in the Exchange. He would prefer to see the Liquor, Gaming and Cannabis Authority of Manitoba crack down on rowdy establishments.

Though it’s unclear what will go into the Citizen space next — it’s traditionally been a revolving door for restaurants, nightclubs and lounges — Santos previously floated the idea of a grocery store.

But any grocer wanting to set up shop would crave density. And so the Exchange’s chicken-and-the-egg argument continues…

“I believe if you can draw more residents into the Exchange, the services and the amenities are going to come, right? Supply and demand,” Santos said.

She would like to move back herself, with her husband once they become empty-nesters.

With new Marketlands mixed-use development in the works at the old Public Safety Building site, among other redevelopments, there will be plenty of vacancies for new tenants.

And there are still many more vacant, derelict buildings standing in the Exchange, ready for a facelift.

Dayna Spiring, president and chief executive officer of Economic Development Winnipeg, said the comments she gets most often from tourists in the Exchange relate to the amazing architecture.

“So we get a lot of positive feedback, and I think it’s an interesting place to be, where you can go to world-class restaurants and then you can go to the theatre and you can walk to a bar or do different things, and that’s not always the case in all cities. Sometimes you’ve got to travel long distances,” she said.

While many outsiders may recognize the Exchange as a jewel, the neighbourhood’s health could depend on getting more locals to think the same — and invest or move downtown.

Porter was an early pioneer and isn’t looking back. He hopes to see the Exchange flourish in the same vein as other major cities’ cores, though he acknowledged progress is slow.

“I hope the slowness doesn’t mean that we will get frozen in time,” he said. 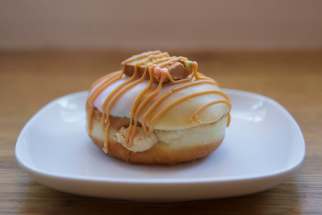 Manitoba fugitive at centre of neo-Nazi murder plot: FBI On the wrong side of right