Vehicles already in use in Australia, Europe

The province unveiled one of its new high-tech ambulances at the legislature Tuesday and although it has yet to see action, paramedics are giving it a passing grade.

The province unveiled one of its new high-tech ambulances at the legislature Tuesday and although it has yet to see action, paramedics are giving it a passing grade.

"I’m excited to give it a whirl," Winnipeg paramedic Brent Tierney said.

The Mercedes-built Dodge Sprinter ambulance is one of four to hit the streets and highways in the coming months as part of a $5-million government program to expand the province’s ambulance fleet by nine vehicles and replace 30 additional ambulances with new models.

Health Minister Theresa Oswald said the new ambulances, commonly used in Europe and Australia, include a number of features to improve safety and comfort for patients and paramedics. These include a no-lift stretcher system to reduce the risk of back injury to paramedics, softer suspension for a more comfortable ride for patients, new reflective markings and emergency lighting to make the ambulances more visible in all weather conditions; better rear seating allowing paramedics to use their seat belts while still working on patients and backup cameras to improve the driver’s field of vision.

The new vehicles are 46 per cent more fuel efficient than the older-style Fleetmax ambulances currently in the fleet. Manitoba Health spokesman Wil Bartel said the Sprinter ambulance costs about $140,000 each, about $10,000 more than the Fleetmax, but burns less fuel. The Fleetmax burns about 26 litres of fuel for every 100 kilometres while the Sprinter burns 14 litres.

Bartel said the new vehicle has six airbags while the older style only has two. When its emergency lighting is activated, it draws less power from the battery than older ambulances, meaning batteries and other electrical components will have to be replaced less often.

"They’re more expensive to buy upfront, but over the life of the vehicle we’ll be saving money," Bartel said.

They’ll be deployed in Winnipeg, Brandon, and the Assiniboine and Interlake regional health authorities to allow paramedics to give feedback on their use.

Tory health critic Myrna Driedger said she fears the province isn’t spending enough to replace its ambulance fleet, which is seeing more use transporting patients between hospitals than ever before. "There’s a lot of pressure being downloaded on emergency medical services," she said. 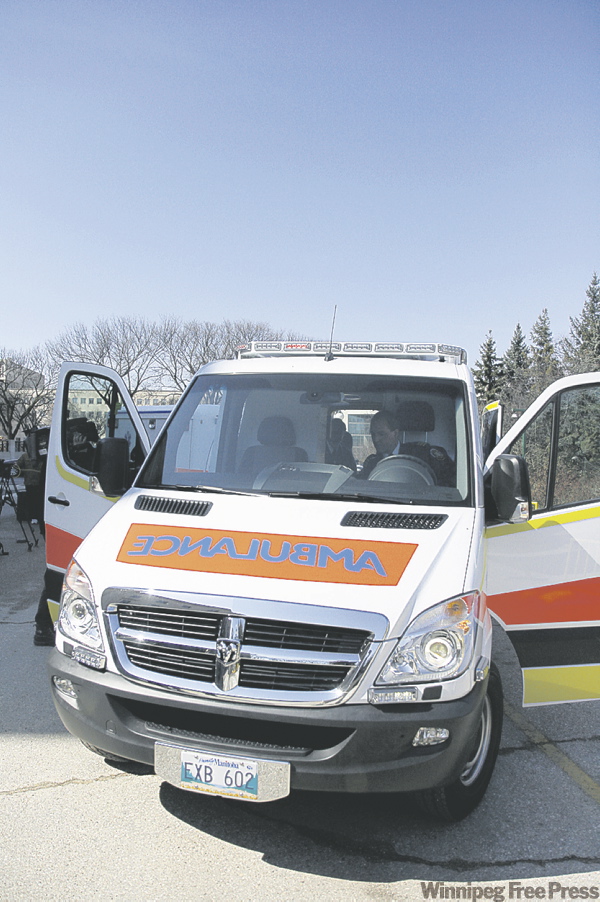