Kids at a Youth for Christ skate park have a message for Winnipeg Centre MP Pat Martin: See for yourself.

Kids at a Youth for Christ skate park have a message for Winnipeg Centre MP Pat Martin: See for yourself.

Martin attacked the reputation of the Youth for Christ organization this week, claiming its sports centres are a "way of luring young prospects" to Christianity.

He claimed Youth for Christ tries to convert "vulnerable, impressionable kids" to what he presumes are fundamentalist Christian views.

Martin made his comments after the City of Winnipeg’s executive policy committee agreed to contribute $2.6 million to the group’s proposed $11.7-million youth centre at Main Street and Higgins Avenue. City council must still vote on the deal.

"It’s totally not like that," said skateboarder Nate Mowchun, 16, at the inner-city skateboard park called the Edge owned by Youth for Christ. Mowchun has been coming to the Edge since he was 12.

Christian talk is limited to Wednesday nights, called Club Nights, Mowchun said. "You can take it or leave it. They’ll say on Club Night that you don’t have to listen to this. It’s up to you."

But if what Martin alleges is true, Youth for Christ failed miserably with Colin Lambert.

"I’m not a Christian but I think YFC is great," said Lambert, who works at skateboard store. And Lambert’s only been going to the Edge for 15 years. He was helping out there on Saturday night.

"I think the criticism is stupid," Lambert continued. "Here’s an organization that’s willing to build the only indoor skateboard park for kids and it’s being criticized."

About 50 kids packed the Edge on Saturday night. One of them was Kyle Nickoshie, 17, who has been skateboarding at the Edge since age 12.

YFC works with about 4,300 kids from ages 12 to 18 who use its facilities like the Edge and the former fire hall in Elmwood. Among its many activities are skateboarding and floor hockey tournaments with up to 18 teams. It also runs a teen mother program.

It hopes to double the number of kids benefiting from its program with the new youth centre. Two hundred to 300 volunteers help run its facilities.

"If none of the kids pursue the Christian faith and all we’re doing is keeping them off the street, that’s a win for us," said executive director John Courtney.

Martin maintained public funding for the youth centre would be tantamount to "taxpayer-funded proselytization."

Youth for Christ: Myth vs. reality 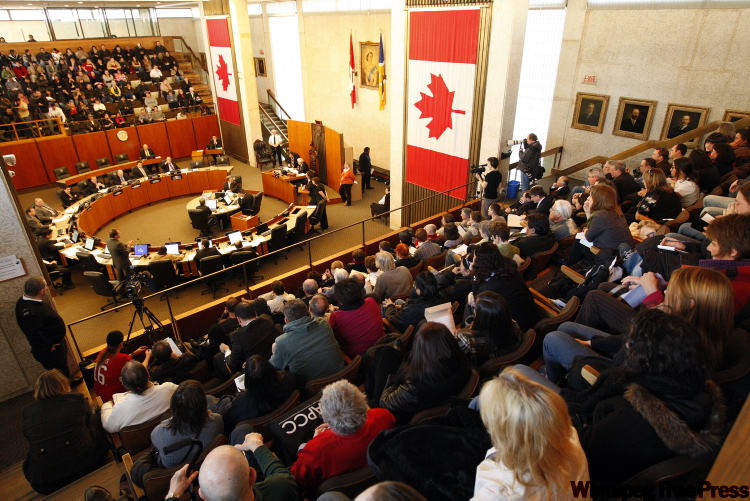