Let's get this right out of the way: The chances of Eric Comrie becoming a regular member of the Winnipeg Jets would appear to be somewhere between slim and none.

Let’s get this right out of the way: The chances of Eric Comrie becoming a regular member of the Winnipeg Jets would appear to be somewhere between slim and none.

That’s the cold, hard truth. There’s just no room at the inn for the fourth-year pro, who finds himself a very distant third on the goaltending depth chart behind Connor Hellebuyck and Laurent Brossoit.

Hellebuyck, of course, is the No. 1 with the Jets, coming off a season as a Vezina Trophy finalist and locked up for five more seasons after this one. He isn’t going anywhere. And Brossoit has emerged as arguably the best backup in the NHL and remains under club control past this season as a restricted free agent. Unless the Jets decide they can’t afford him, he’s very much in the future plans.

All of which poses a very big problem for Comrie, who was hoping by now to, at the very least, be the No. 2 with the Jets. And so the 23-year-old remains on the farm with the Manitoba Moose, now 164 games and counting into an AHL career that looks like it’s not going to be ending anytime soon.

Comrie — drafted in the second round, 59th overall, in the 2013 NHL draft — is basically waiting for an opportunity that might never come.

“Zero. Not worrying about that at all,” Comrie told me Monday when I asked whether the goalie backlog is bothering him. “That’s not in my control. I can’t worry about that. I’m with the Manitoba Moose. I have to win games down here.”

“That’s not in my control. I can’t worry about that. I’m with the Manitoba Moose. I have to win games down here.”–Eric Comrie on the Jets’ goalie backlog

Coming into training camp last fall, many observers felt it was a toss-up between Brossoit and Comrie for the role behind Hellebuyck. After all, Brossoit was coming off an ugly season that included being demoted from the Edmonton Oilers down to the AHL. And Comrie had played in three games with the Jets after backup Steve Mason got hurt.

What a difference a few months can make. Brossoit won the backup job and is now 10-0-1 in 11 starts with the Jets, with the best goals-against-average and save-percentage in the league among netminders with that many starts. Comrie, meanwhile, is a mostly forgotten figure among Jets fans, toiling away in the minors.

“I really haven’t watched many Jets games this year, to be honest with you. I don’t really know how they’re doing. We’re kind of every other day right now, back and forth games, and it’s kind of nice to get away from hockey a little bit when we go home,” said Comrie.

I asked Moose head coach Pascal Vincent on Monday if he’s seen any evidence of frustration from Comrie over the situation.

“A real honest answer here. Whether it works for the Jets or not, in Eric’s case it’s going to work somewhere,” said Vincent.

“He’s building a name for himself, because he stuck to the plan, he kept working hard. He’s an amazing team player. We do some tests with the players as far as who’s got leadership in the room and in what fashion. And every year since I’ve been there he’s one of our biggest leaders in the room. Just because of his work ethic and he’s a positive kind of guy. That goes a long way, and at some point it’s going to pay off.”

“Every year since I’ve been there he’s one of our biggest leaders in the room. Just because of his work ethic and he’s a positive kind of guy. That goes a long way, and at some point it’s going to pay off.”–Moose coach Pascal Vincent

There’s the rub. Because while he likely isn’t in their long-term plans in net, that doesn’t mean Comrie is any less valuable to the organization. In fact, his worth might be higher than ever.

Comrie is quietly putting together the finest season of his career, now 15-11-2 with a .923 save percentage, which is third-best in the AHL behind only Collin Delia (currently up with the Chicago Blackhawks) and Jordan Binnington (currently up with the St. Louis Blues). He has played the second-most minutes in the league, and his 2.65 goals-against average is 12th best. Keep in mind, he’s doing this on a Moose team that has been very mediocre this season and only just got over the .500 mark thanks to a 6-0-1 run, in which he’s played the past six games in a row.

“If he had any frustrations, I don’t know. But what I do know is the first year, his partner in the net was Connor Hellebuyck. His second year it was Ondrej Pavelec. Last year it was Michael Hutchinson. And this year we told him this is your net. And you run with it,” said Vincent.

Comrie might just run with it… right out of town.

The rest of the league is noticing. And you’d have to think NHL general managers are taking notice as well, especially ones from teams looking to improve their goaltending depth.

It’s no secret the Jets will be looking to bolster their lineup as they take another run at the Stanley Cup in the spring, hoping to go even further than last year’s Western Conference final. Many of the team’s best young prospects are actually playing a regular role with the big club right now — Jack Roslovic, Mason Appleton, Brendan Lemieux and Sami Niku, of late.

Jets general manager Kevin Cheveldayoff would probably be loath to part with a player actually contributing right now with the Jets. And that’s where Comrie might emerge as a very interesting potential trade chip. Especially with 20-year-old Mikhail Berdin burning up the ECHL this season and pushing for regular AHL work in the near future.

Moose teammates point to Comrie as the biggest reason they’ve been able to turn their troubled season around in recent weeks.

And even though he says he isn’t watching them very much, Comrie was quick to add Monday that he’s cheering for the Jets while not worrying about his own future, which includes being a restricted free agent next summer.

“For me it’s just about playing my game the best I can and helping whatever team I’m on win games.”–Eric Comrie

“I’m really happy they’re doing great. That’s just awesome for the organization. I think they have a true chance of winning a Stanley Cup this year. I’m just really rooting for them,” said Comrie.

“But for myself I can’t control that stuff. For me it’s just about playing my game the best I can and helping whatever team I’m on win games.”

For now, that’s the Moose. 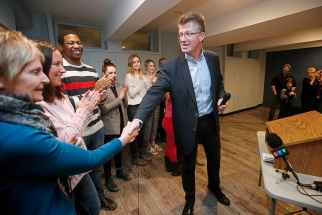 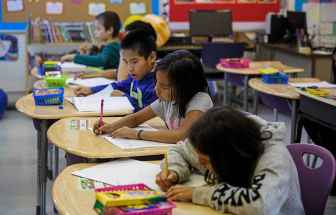 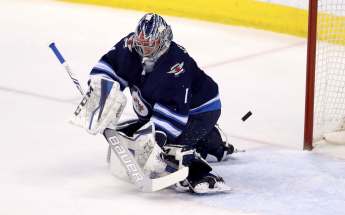 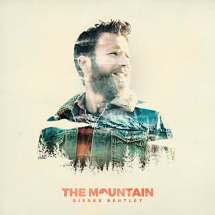 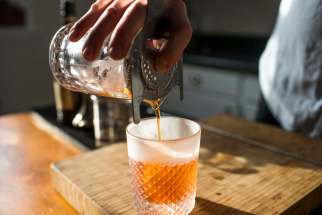 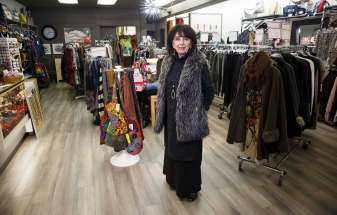 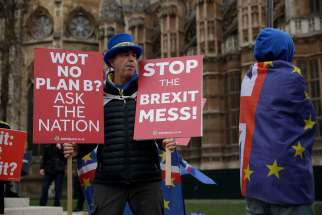 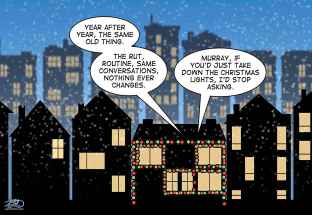