Keeping the faith for Sunday

Banged up, bushed, and yes, beaming, the Manitoba Moose returned home Wednesday with the common refrain of "just get us to Sunday."

Banged up, bushed, and yes, beaming, the Manitoba Moose returned home Wednesday with the common refrain of "just get us to Sunday."

The Moose were spouting a similar mantra, "just get us to Winnipeg," prior to Game 5 and with that 3-2 win over the Hershey Bears in the best-of-seven Calder Cup final, have decided to stay simple in their approach and worry only about Game 6.

If Manitoba, which trails the series 3-2 and will face elimination again on Friday night, can manage to push back the powerful Bears one more time they say they’ll let Game 7 and all its wondrous possibilities take care of itself.

The Moose bused to Newark, N.J., late Tuesday night and after two or three hours of sleep, flew back to Winnipeg before landing in the city just before 11 a.m. Despite the lack of rest, the mood was light and players were talking about the possibilities of a playing in front of a sold-out arena Friday night.

Manitoba coach Scott Arniel has been even-keeled throughout the final and he continued to show a smooth exterior the morning after escaping elimination.

"I don’t know if it will be fun. These games have been anything but fun. They’re hard on the ticker and they’re starting to get nasty," said Arniel. "We have to make sure we come home and make sure we don’t take a step back. We don’t want to be happy just getting the series home. We have to get this to Sunday. They don’t want to get to a Game 7."

Veteran forward Jason Jaffray has been a warrior throughout the playoffs and quietly picked up a pair of key assists in the last two games.

"The whole point of this trip was to win home ice back. We got it done the hard way but we did get it done," said Jaffray, who led his team to a Game 2 win with a natural hat trick at the MTS Centre. "We can win this series. Cory Schneider has given us a chance to win in each game and it’s just a matter of our offence getting two or three goals because if we do that, Cory Schneider can steal it for you. We’re going home and we’re going to be in front of our fans.

"Their fans were loud and crazy and it was a tough place to play. Now they’re going to have to say the same about Winnipeg."

Three-time Stanley Cup champion Mike Keane, who at 42 is the oldest player in the series, is having more fun right now than the greenest of rookies. If it can be said about anyone, this is Keane’s time of the season.

"We get to play again in Winnipeg which is awesome," said Keane. "When we headed down to Hershey we said we wanted to get one win and get the series back home. We didn’t care if it came in the first, second or third game there, so long as we got it.

Moose goalie Cory Schneider was the star of the show on Tuesday night stopping 31 of 33 shots including about 10 difficult Hershey scoring chances. Moose defenceman Mark Fistric put it bluntly Wednesday when he said: "Cory has to be that good for two more games if we’re going to win this."

Schneider seemed pleased that his teammates were willing to jump on his back as they try to defeat a Bears club that has owned the majority of the play for the last three games in this series.

"I think I can," said Schneider, when asked about his chances of repeating Tuesday’s superior effort. "I’ve been playing pretty well the last couple of games so I’ll just try to stay locked in and keep my team in the game as long as I can until they can take over."

Schneider and Bears goalie Michal Neuvirth have alternately been the stars of this series and many observers see the Calder Cup as a tug of war between the two.

"I’m just trying to let my play do the talking. I want to try and let my team get the first goal because that’s big for us," said Schneider.

"I don’t want the season to end. I’m doing everything I can to make sure that happens. I’m going to have to play just as good as I did in Game 5 if we’re going to have a chance to win the next two games. I’ve always loved playing at home and I’m looking forward to the chance."

All hands on deck

Team treatment: Game 5 was an absolute war and likely took its toll on both sides. Forwards Mark Cullen, Dusty Collins and Alex Bolduc will continue to receive work but expect Collins and Bolduc to be ready for Friday night. Cullen is listed as doubtful.

Banged-up Bears: No one on the Bears side of things appears to be in danger of missing Friday night but the suspicion is that both Alex Giroux and Graham Mink are playing hurt and doing so very admirably.

Ticket update: Game 6 is sold out as is a potential Game 7.

Planning a party: The Bears, who are scheduled to charter into Winnipeg on Thursday, are bringing their entire front office staff and players’ families along for the ride. Hershey has won nine Calder Cups in team history but has not celebrated on home ice since 1980. The Bears are taking no chances about their post-game plans and, should they win in Winnipeg, will be ready to party.

How to see your Moose: Game 6 will be shown on both Shaw-TV and MTS-TV in Winnipeg, as will Game 7 if needed. The games will be broadcast on Shaw Cable — Channel 9 and MTS-TV — Channel 50. All games can be heard on CJOB 680. 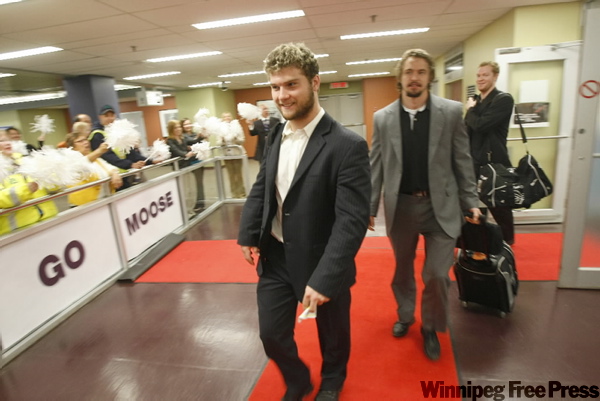