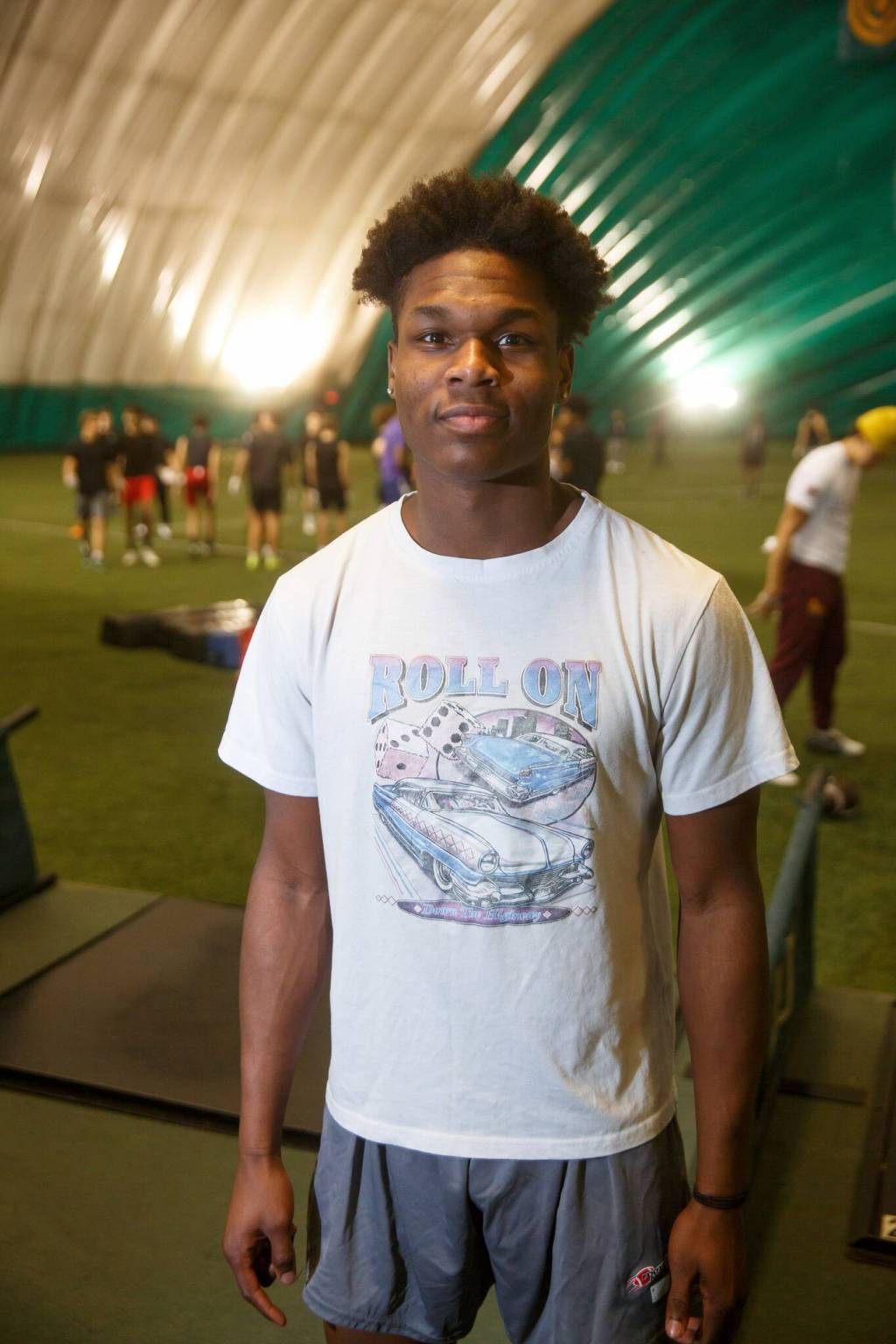 The label ‘generational player’ is thrown around much too casually these days.

Fewer on field could boost football

Fewer on field could boost football

More players, more participation, more opportunity — all prevented by a narrative that it’s not real football. 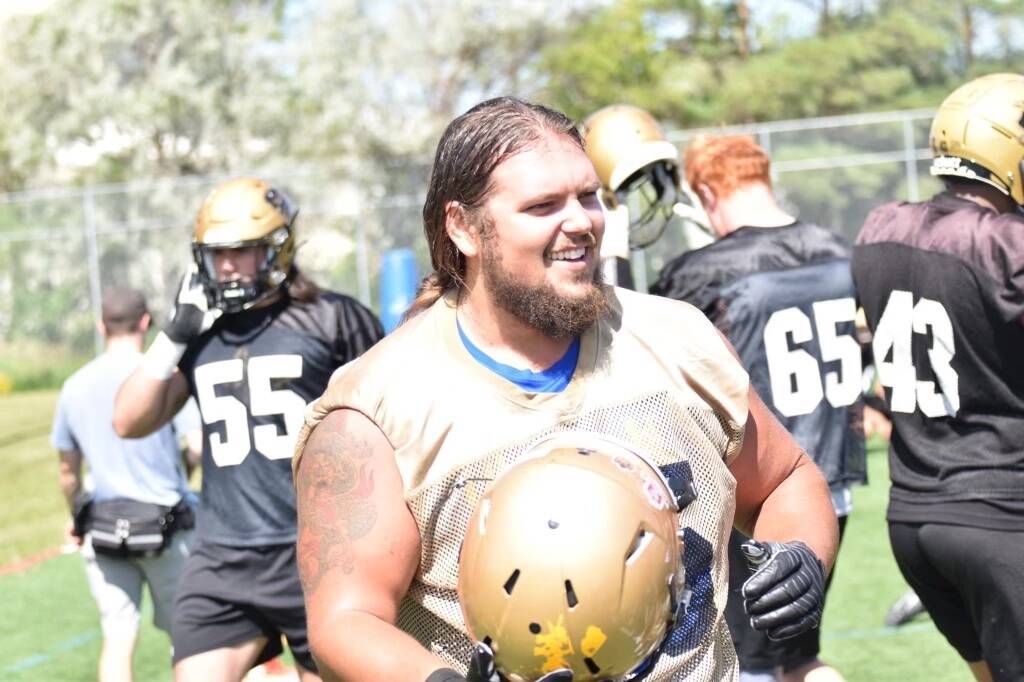 The Steinbach Sabres had a taste of semifinal heartbreak in 2021. A year later, they weren’t about to be denied again.

Steinbach Sabres’ Nik Reimer was a force to be reckoned with Thursday in the Sabres victory over the Vincent Massey (Winnipeg) Trojans. 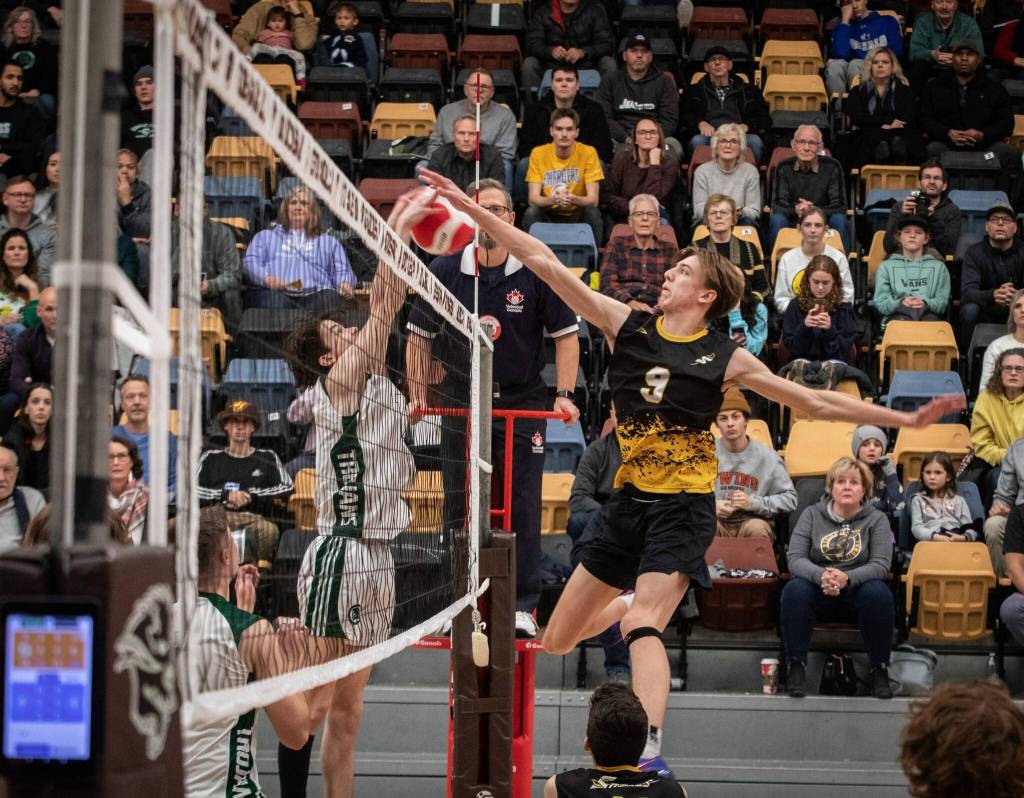 The Sturgeon Heights varsity girl’s volleyball team was David, but leaned on a Goliath of its own to advance to its first AAAA provincial championship game since Sturgeon Creek and Silver Heights amalgamated to form Sturgeon Heights. 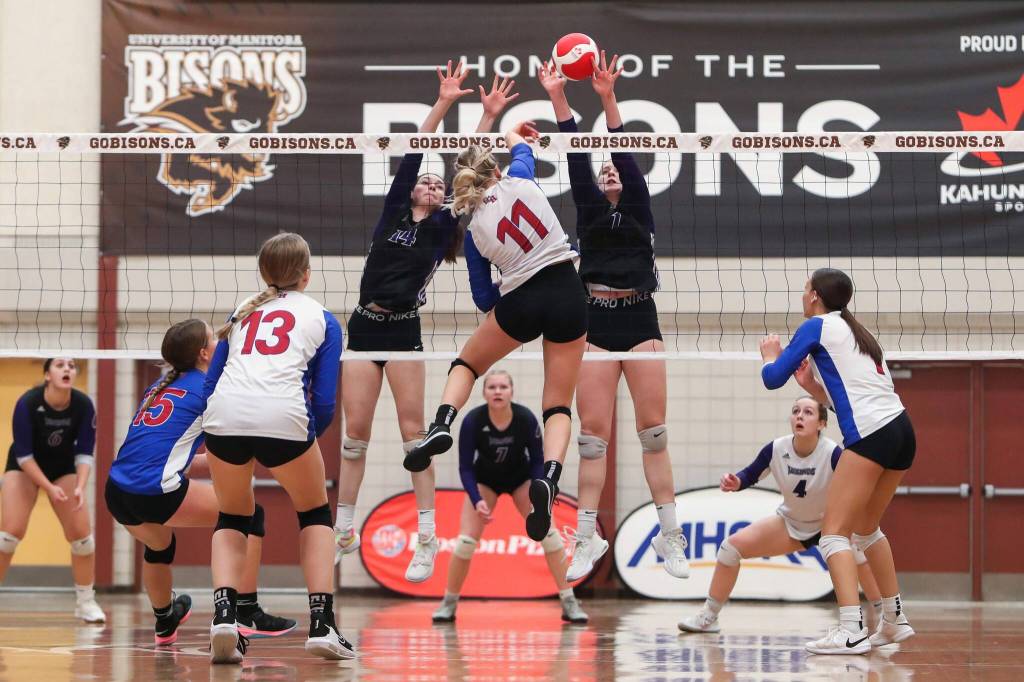 Crusaders the team to beat

Crusaders the team to beat

The St. Paul’s Crusaders didn’t win a tournament until late October, but that breakthrough has made them the team to beat entering the Manitoba High Schools Athletic Association AAAA varsity boys volleyball championship.

St. Paul’s Crusaders towering Jack Taylor’s offence can be a nightmare for opposing teams to defend against. 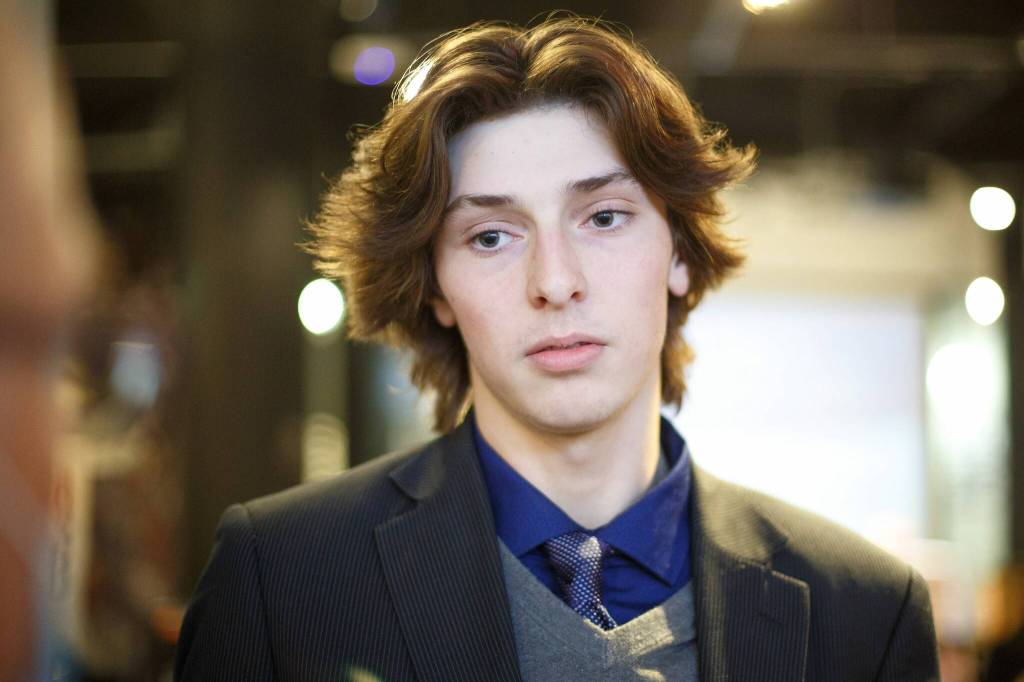 A year ago, a youthful Vincent Massey Trojans squad was one win away from a berth in the Manitoba High Schools Athletic Association AAAA varsity girls provincial final.

Kaiya Krahn is one of three members of the Vincent Massey Trojans varisty girls volleyball team recently ranked among the province’s top-10 players. 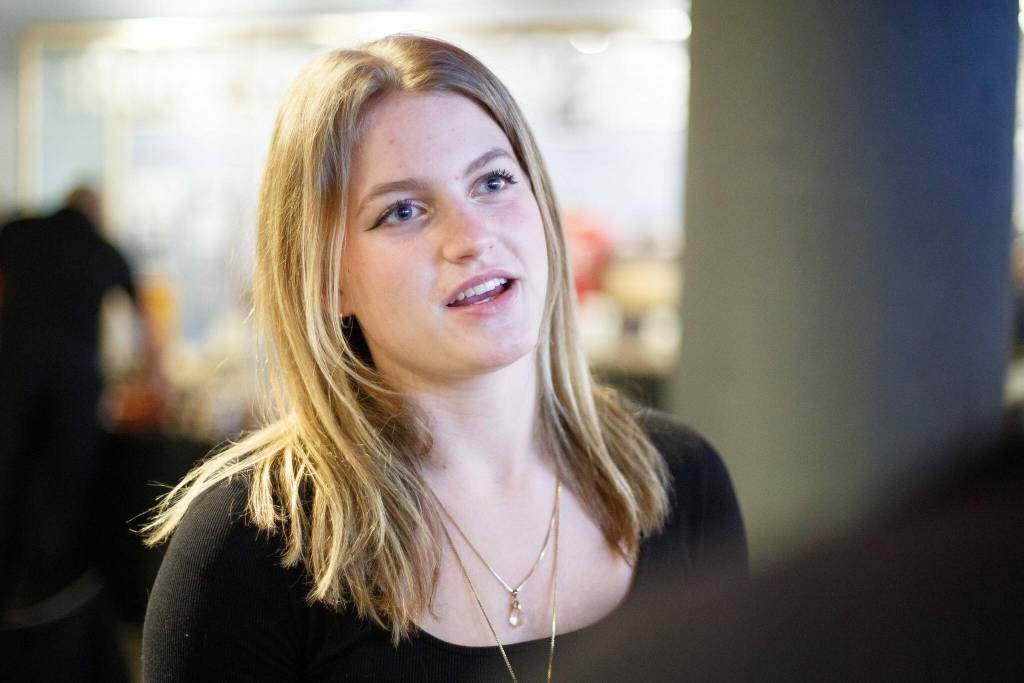 Fiona Brown’s stellar play during the 2022 season has earned her the No. 1 spot in the Free Press’s inaugural coaches’ poll honouring the province’s best high school varsity girls volleyball players.

Top-ranked high school girls volleyball player Fiona Brown is a team leader and an offensive force at Oak Park High School where she led the No. 5-ranked Raiders to a berth in Saturday’s AAAA quarter finals. 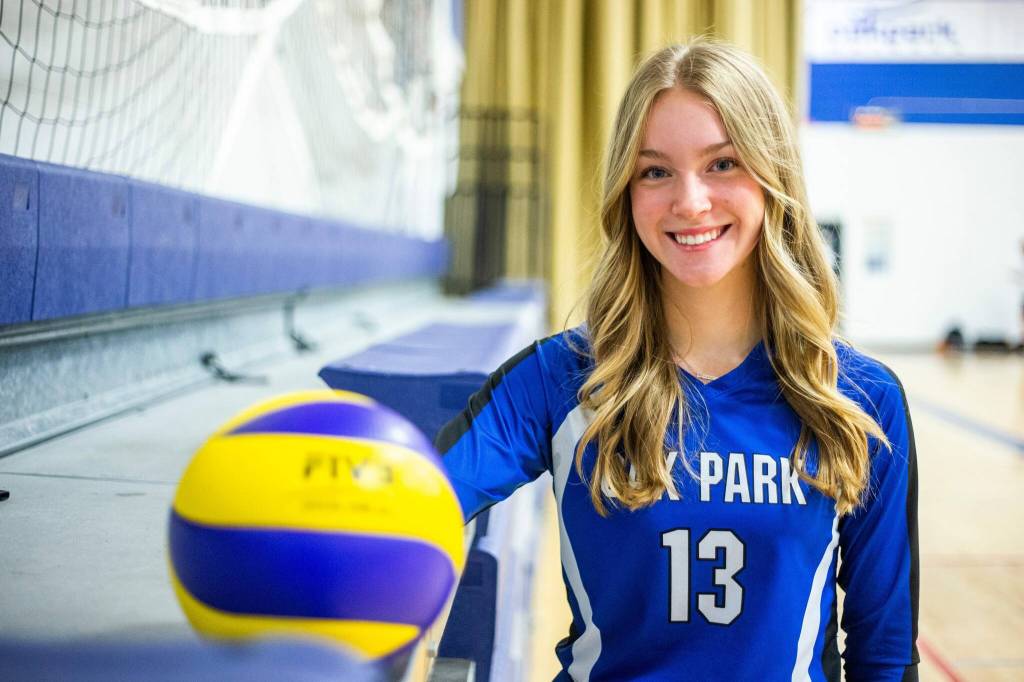 It’s fair to say the celebration was worth the wait. 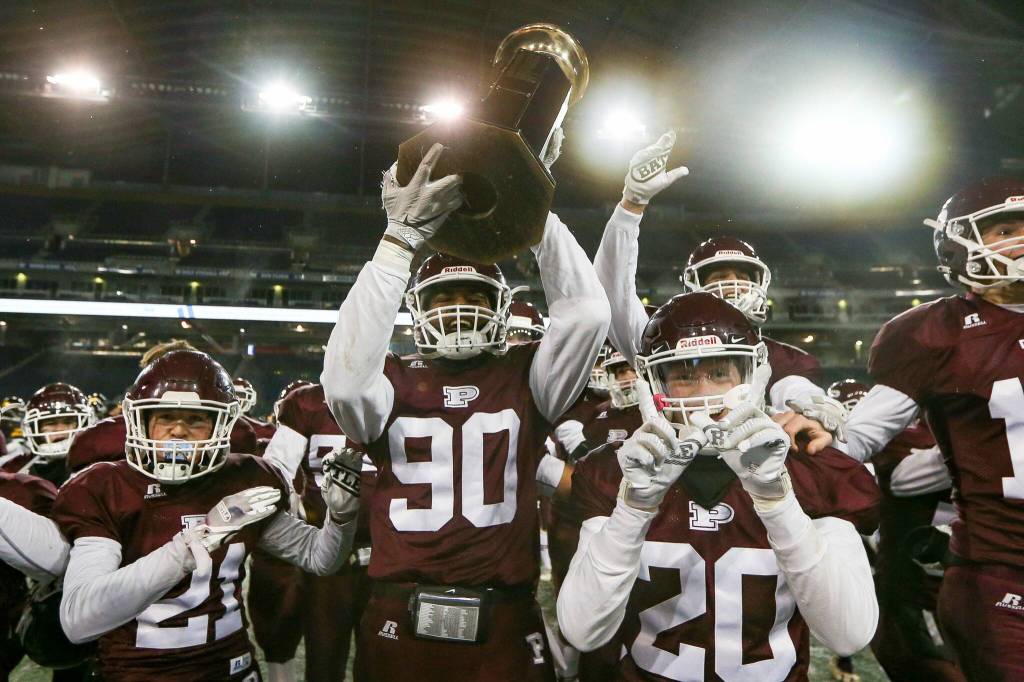 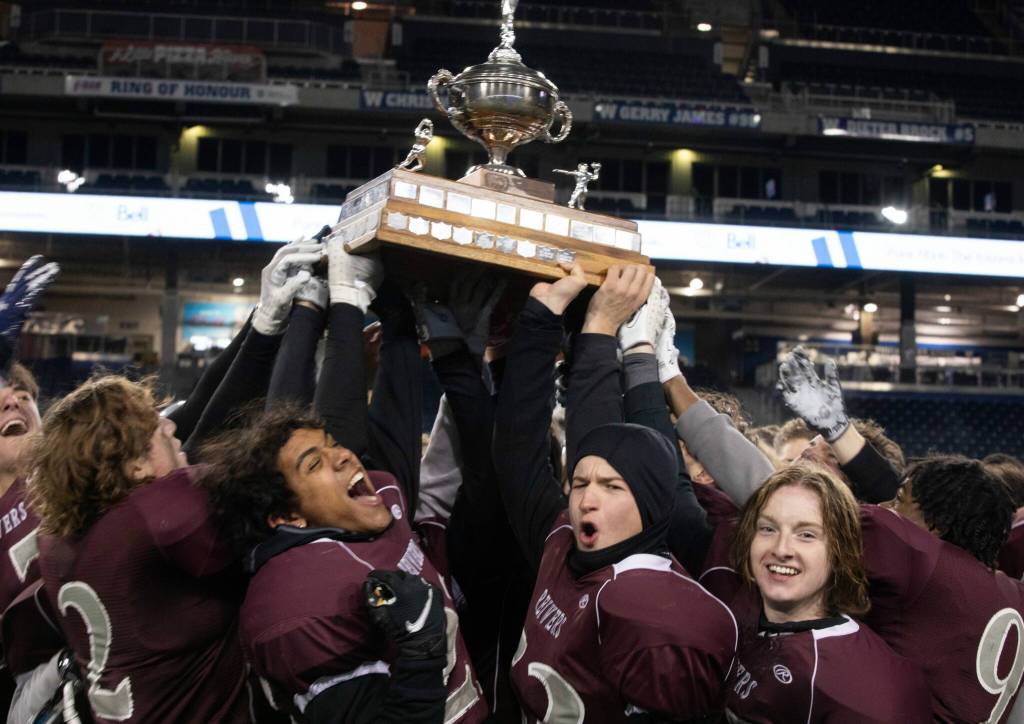 Eric Vincent’s recipe for a championship-calibre team has come together like many do, after a number of seasons and across a painful series of trial and error.

Sturgeon Heights Collegiate running back Mason Thorn has respect for his opponents, but thinks his team has what it takes to win the championship. (John Woods / Winnipeg Free Press) 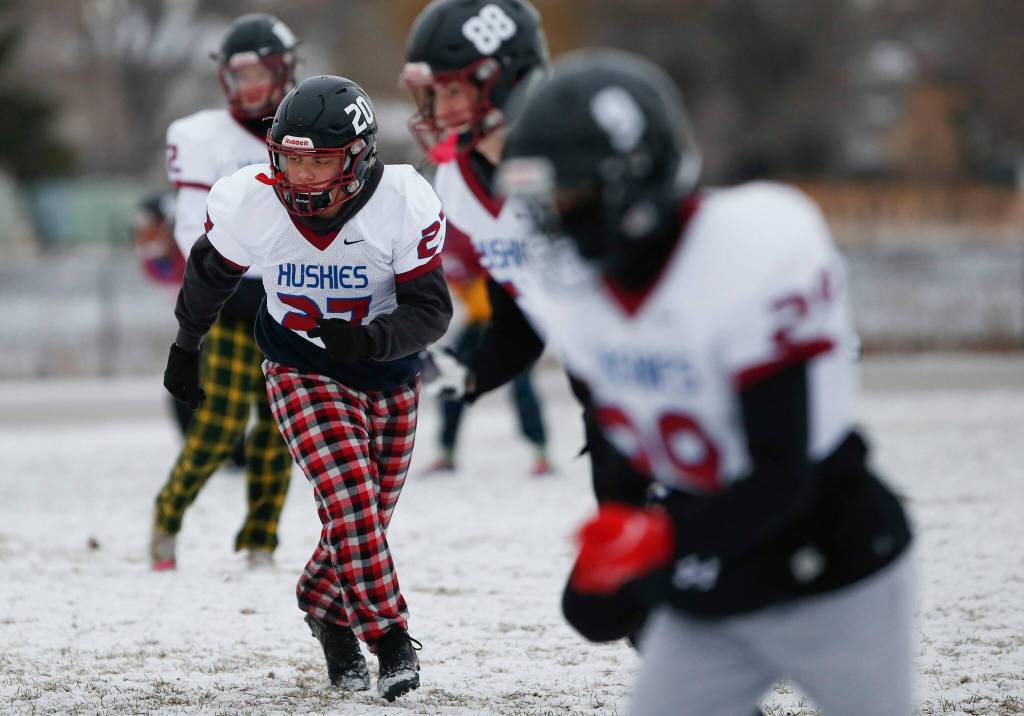 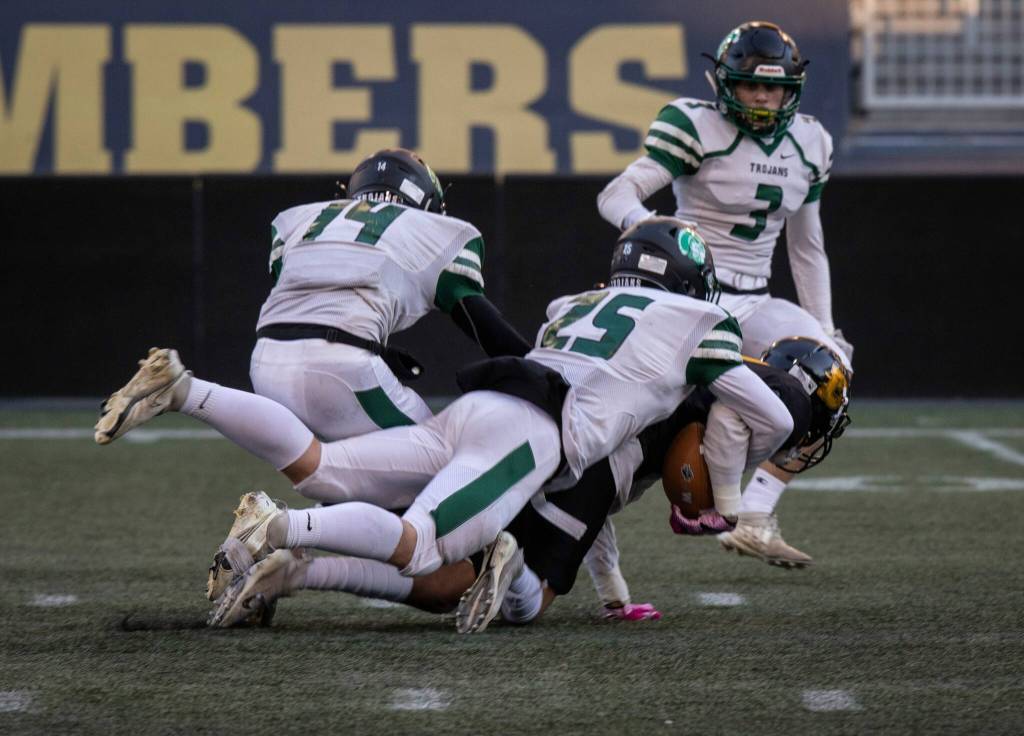 Churchill Softball Academy student Sally Leask says she has experienced improvement in all aspects of her game since the beginning of the school year. 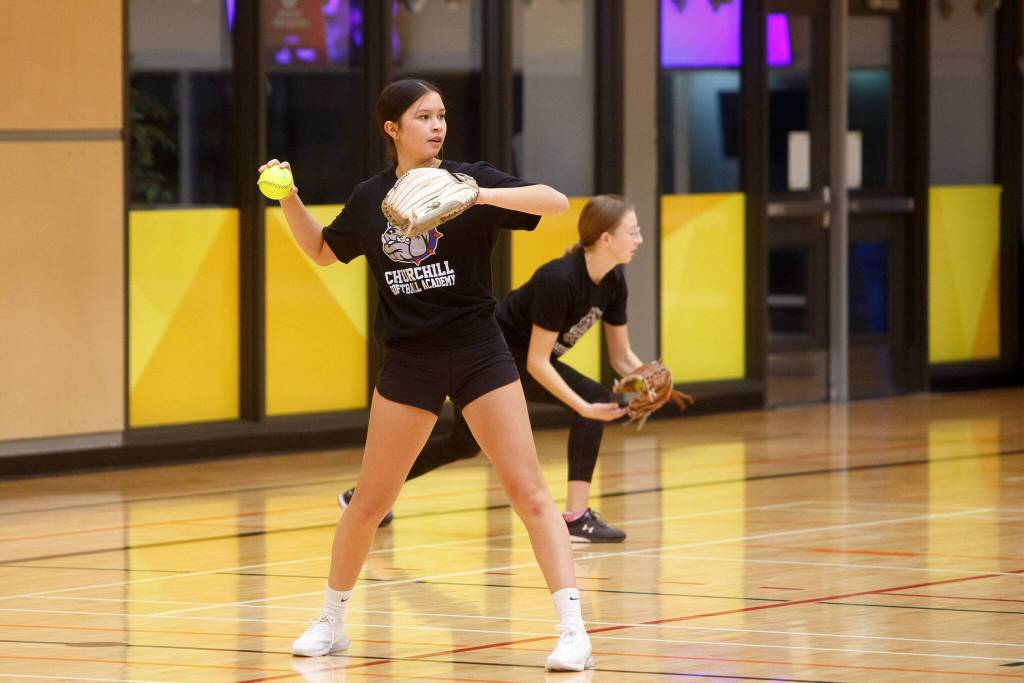 Lancers are in it to win it

Lancers are in it to win it

Dakota Collegiate has never won a triple-A provincial championship in varsity football. It’s two games away from putting that slide to rest.

Dakota Lancers linebacker Nevan Brown says his team has a an opportunity this year to ‘win it all.’ 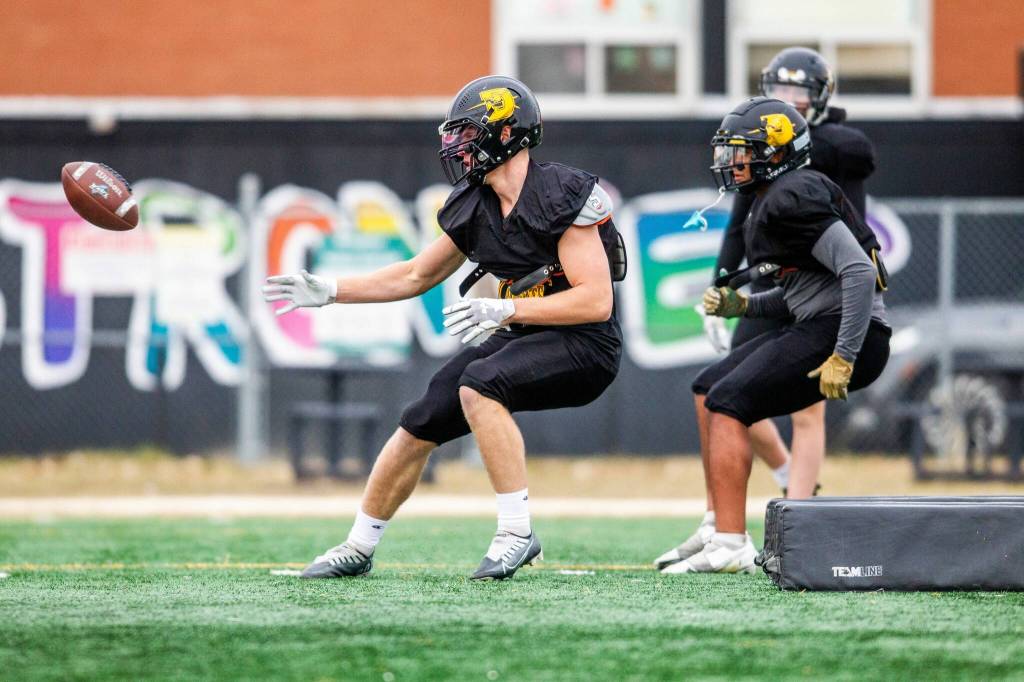 Boston Thiessen won’t deny it — he did not expect the Steinbach Regional Secondary School (SRSS) Sabres varsity boys’ volleyball team to be this dominant. 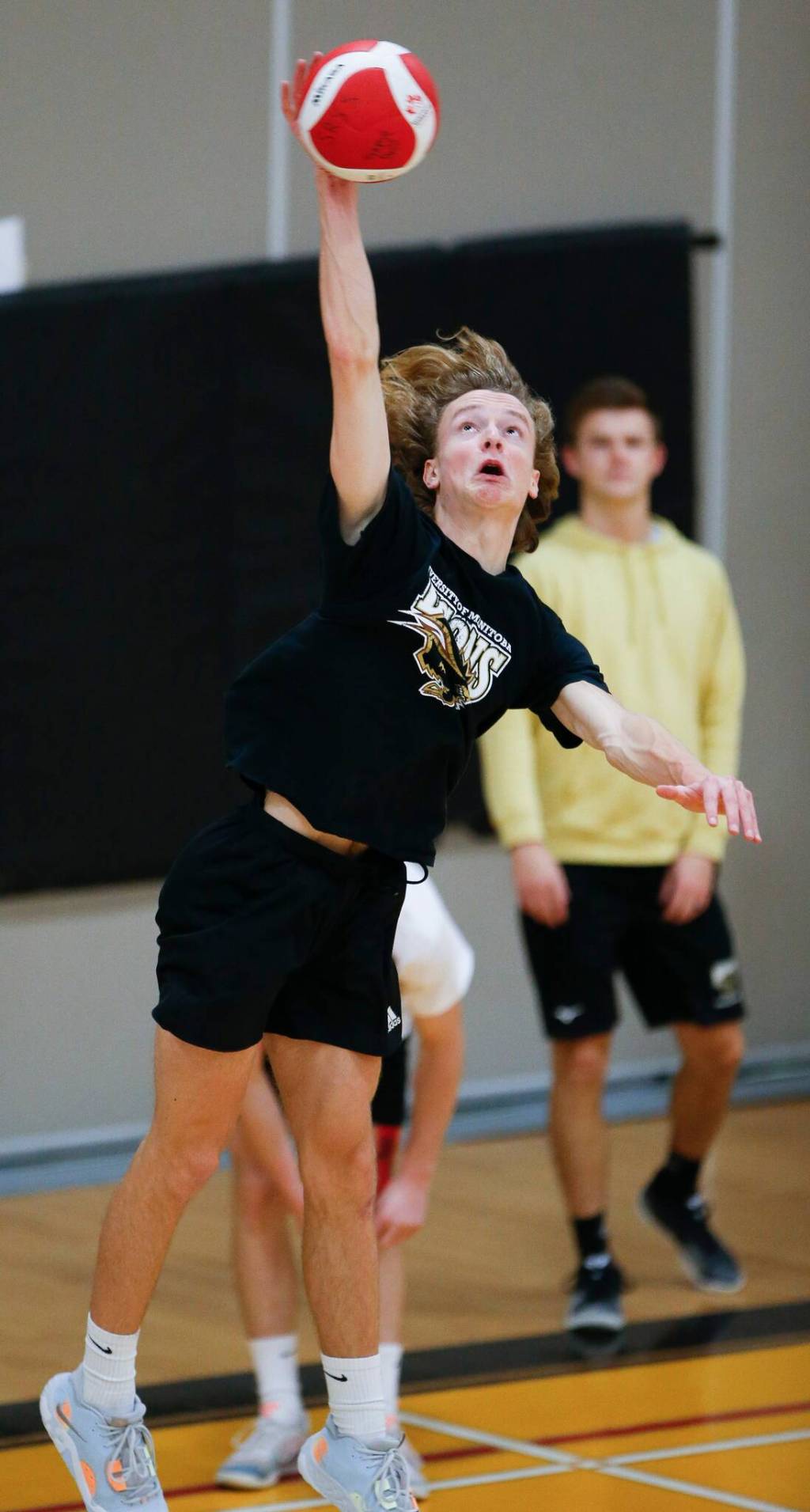 An emphasis on responding was drilled into the Miles MacDonnell Collegiate football team all week with a pivotal matchup against the Kelvin Clippers on the horizon and the playoffs approaching.

Miles Macdonell Buckeyes' Amari Griffiths-Sosoo runs for a touchdown against the Kelvin Clippers on Thursday at Kelvin High School. 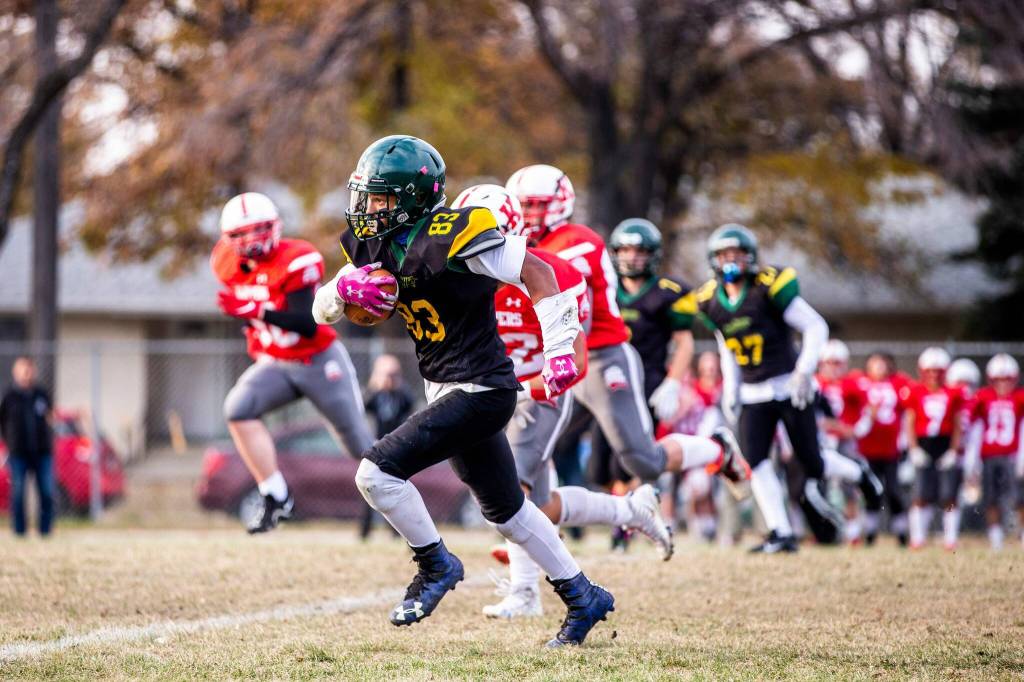 Manitoba’s premier young long-distance runners bundled up to trek the rugged terrain in Killarney for the provincial high school cross-country championships on Wednesday. 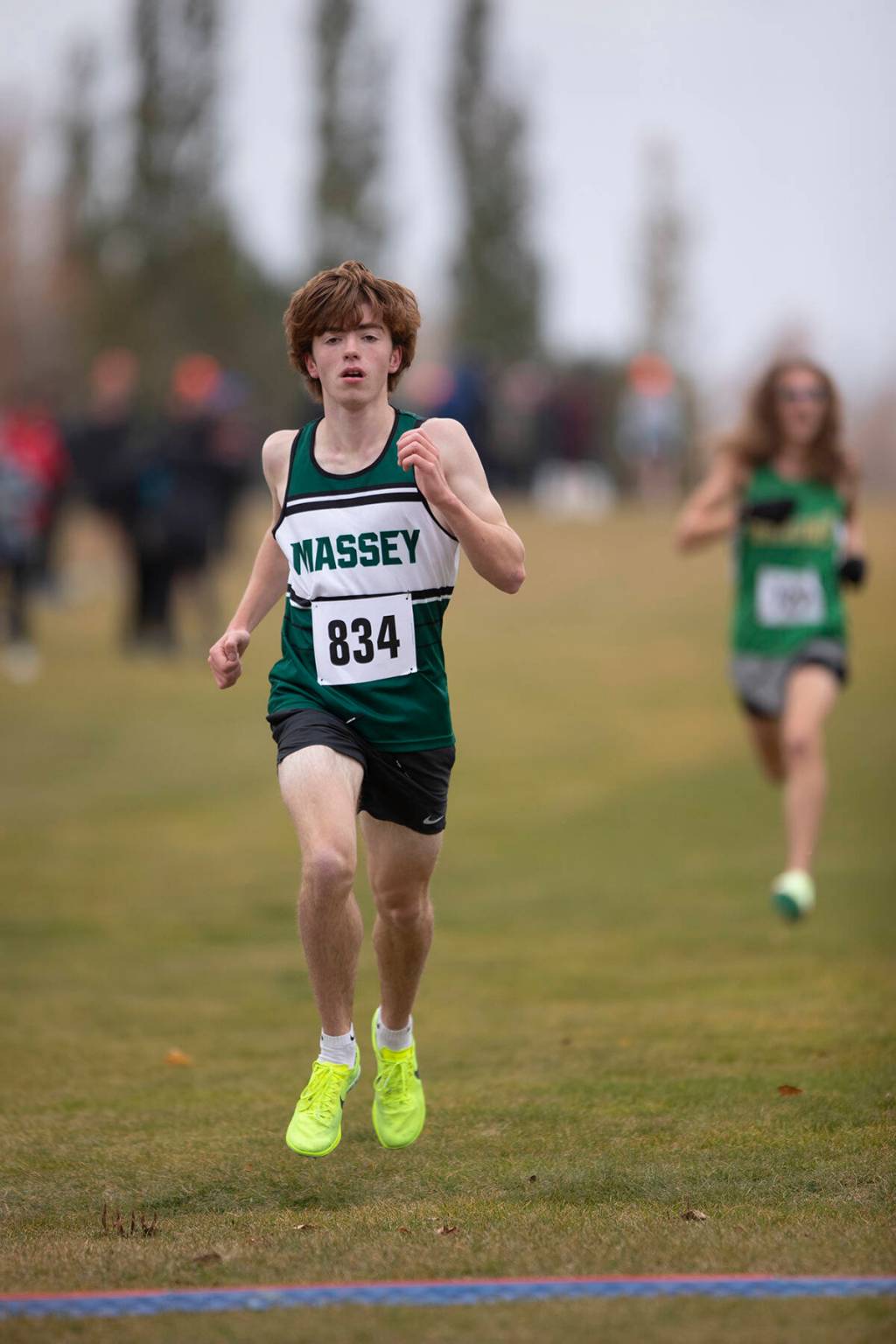 Jerome Fouillard makes the same drive to Winnipeg every morning with one goal: to prevent his parents from ever having to spend another dime on his aspirations.

Jerome Fouillard hammers the sled at Raiders practice Tuesday. To get maximum production from a remarkable athlete Oak Park uses him on both offence and defence. 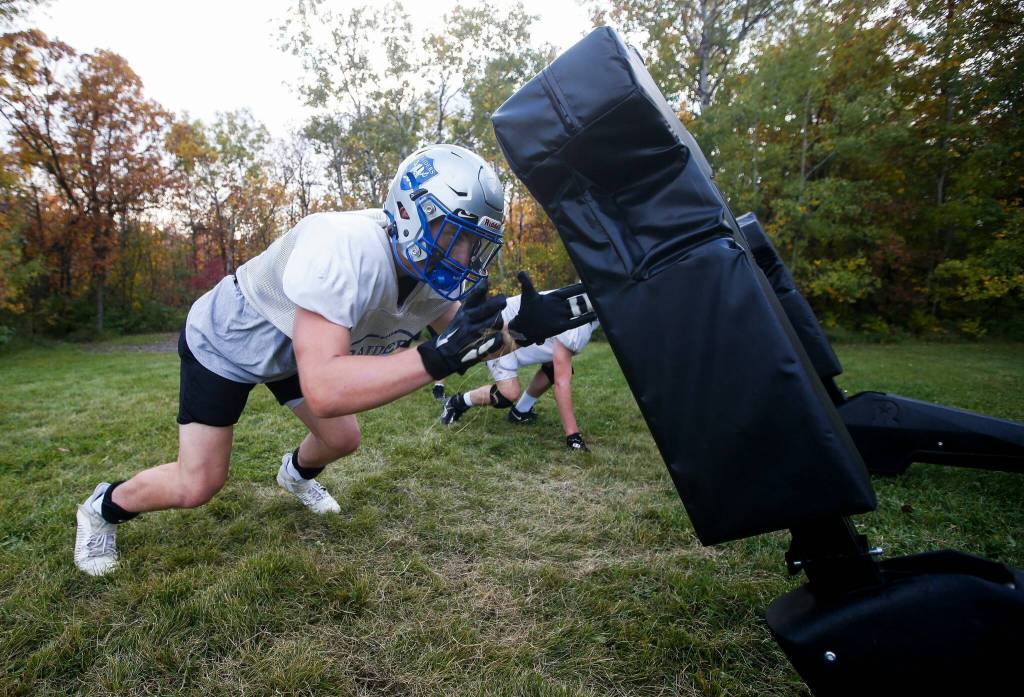 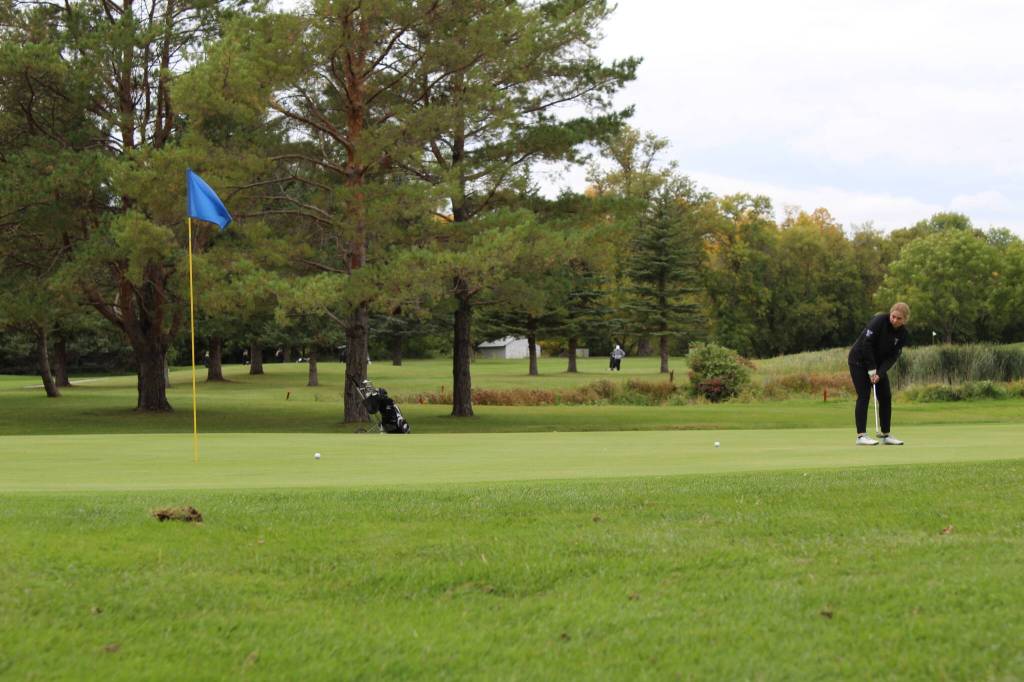 The Winnipeg High School Football League enters its third week of the 2022 regular season with some familiar squads atop the standings and noteworthy streaks on the line. 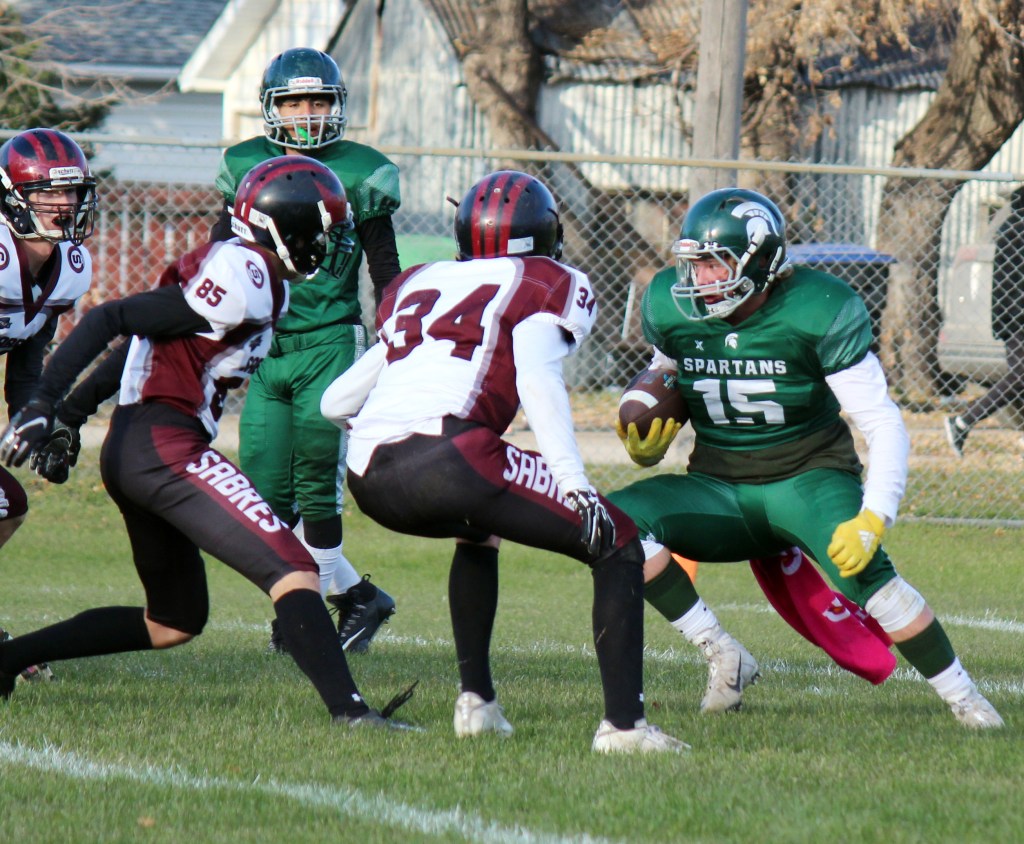 Legendary coaches hang up their clipboards

Legendary coaches hang up their clipboards

The reminders of past athletic glories are plastered all over gym walls at Oak Park High School.

On Thursday, on the last day of the 2021-22 academic year, both men were retiring after lengthy teaching careers at the Charleswood area school.

Tears were shed and memories were recounted. There were no regrets. 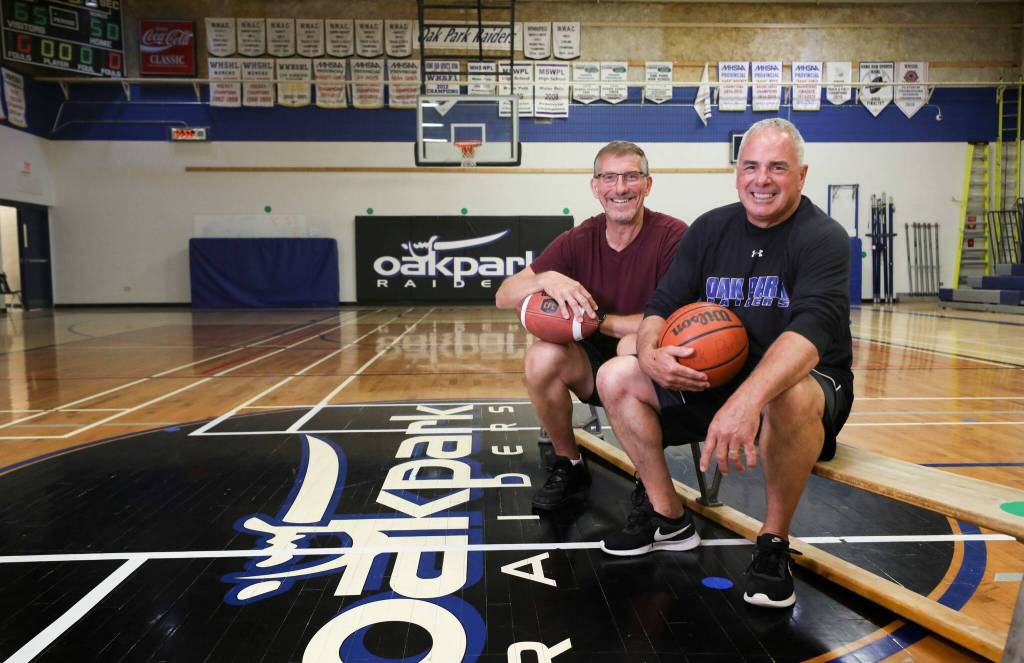 It was a 48-hour whirlwind for Gwen Bestland.

The 17-year-old graduated from Sanford Collegiate on Monday and thought she was going for lunch with her parents to celebrate on Wednesday.

That was until they made a pit stop at downtown’s Sport Manitoba, where a host of other secondary-school athletes and their families from across the province were gathered for the 2022 Manitoba High Schools Athletic Association (MHSAA) Athlete of the Year ceremony.

Bestland, surprised at the banquet by her hockey coach and two teammates, was a nominee for the award from the “AAA” girls category but had been kept in the dark about her nomination by her family and friends. 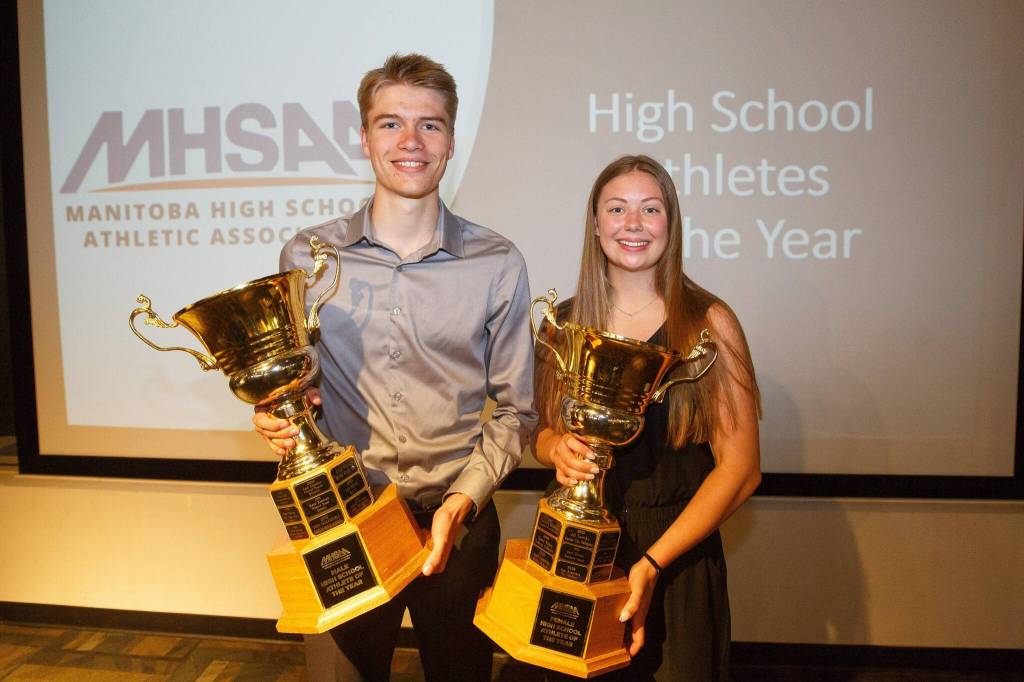 Generational talent is an overused term to describe many outstanding athletes. It’s probably not an overstatement in the case of Raya Surinx.

And, if not for a cruel twist, the 17-year-old would probably be one of the youngest players suiting up for Canada’s U21 team at the Pan American Cup currently underway in Mexico.

A positive COVID-19 test at the national team training camp in Edmonton forced Surinx into isolation for five days and a subsequent positive PCR test dashed any hopes she would travel with Team Canada. 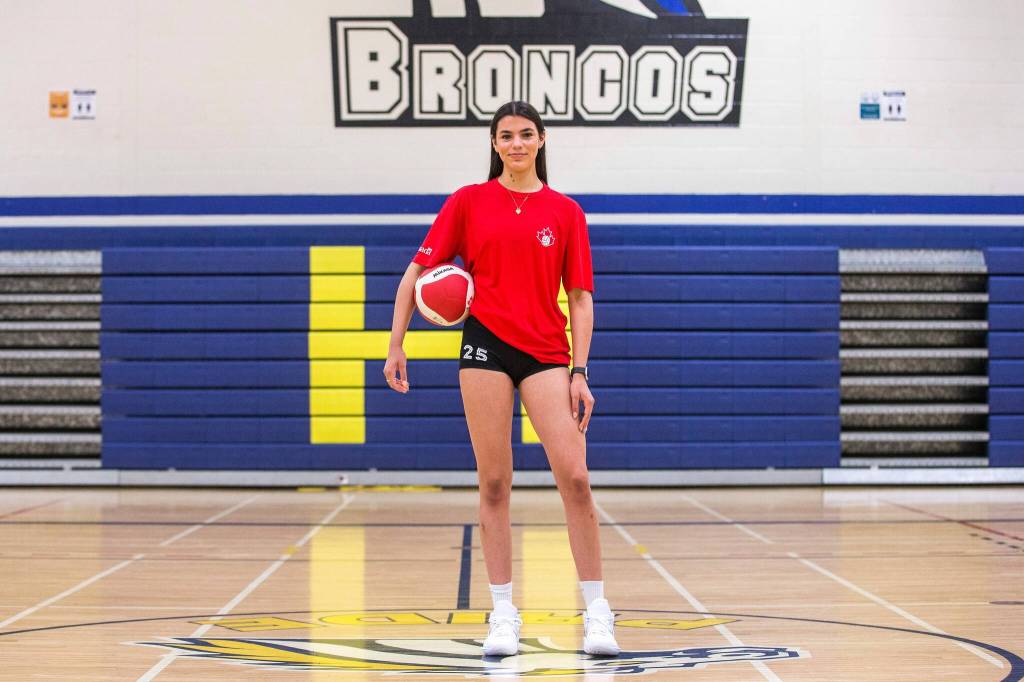 Riya Donnelly has developed into one of the province’s top young basketball players by doing things her way.

The 17-year-old from Charleswood, who recently committed to play U Sports ball for the Algoma University Thunderbirds in Sault Ste. Marie, Ont., left Oak Park High School to play her Grade 12 season in the inner-city at Daniel McIntyre Collegiate Institute.

A strong connection with DMCI coaches Wyatt Anders and Carriera Lamoureux had Donnelly wanting to make a change. It ended up working out as the 5-8 small forward led the Maroons to a convincing victory over the Westwood Warriors in the Winnipeg School Division conference championship in March.

“I heard a lot of backlash from a bunch of people around Manitoba. Personally, I was skeptical of transferring to an inner-city school. It’s not something I was used to and it’s quite the drive from where I live,” said Donnelly, Oak Park’s junior varsity athlete of the year in 2020. 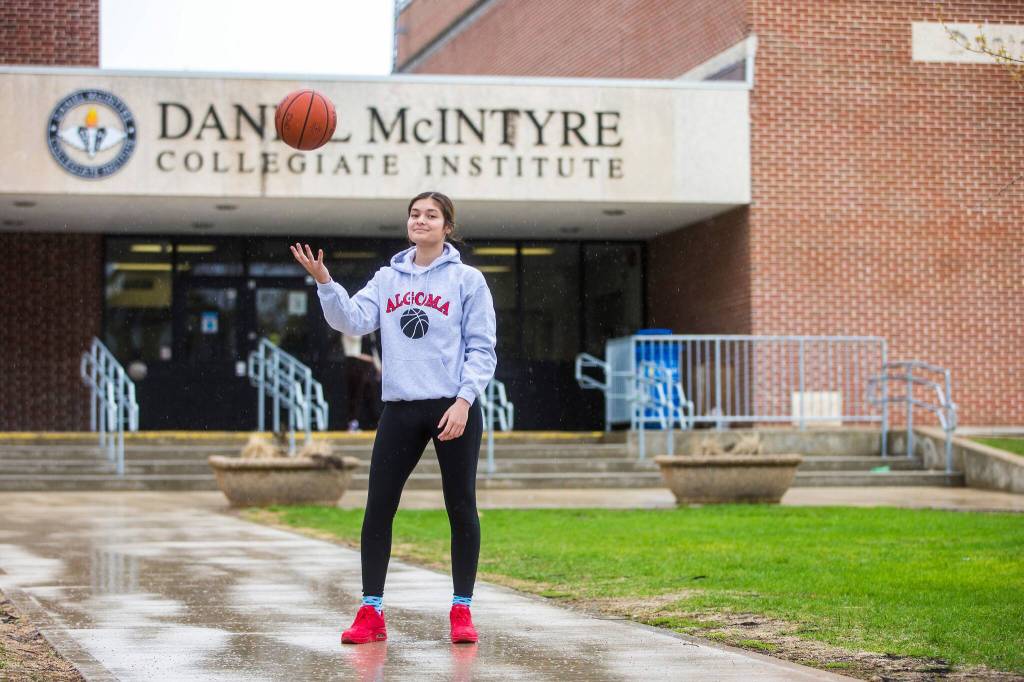 Poirier keeps her eyes on the prize

Poirier keeps her eyes on the prize

Don’t tell Serenity Poirier that streaks are made to be ended.

The Grade 12 student at Lac du Bonnet Senior School hasn’t dropped a set in her high school badminton career and Poirier is determined to graduate with her flawless record intact. To do so, Poirier needs to end her high school career with a strong performance at this week’s MHSAA’s Provincial Badminton Championships at Prairie Badminton Club (May 5-7).

“I know I’m one of the better athletes that are going to be out there. If someone isn’t as good of an athlete, I try to rally with them and get them moving. Cause you know, for other people to get better, playing against harder competition is what’s going to help,” Poirier told the Free Press over the phone on Wednesday. 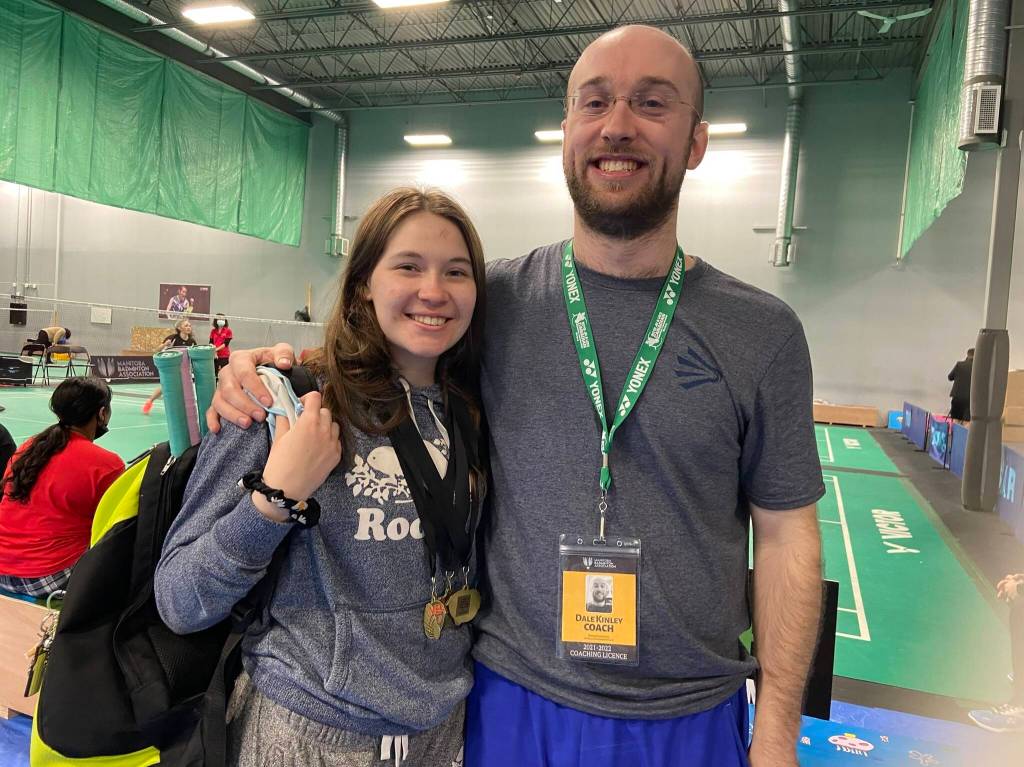 It was the Monday morning after spring break when Oak Park High School principal Troy Scott received a call from one of the school’s most well-known alumnus, Nic Demski.

The Winnipeg Blue Bombers wide receiver called to say that he wanted to bring the Grey Cup back to where he first made a name for himself in the sport.

As you can imagine, Scott quickly signed off on that idea.

The plan came to fruition on Monday as Demski, as well as Bombers running back Brady Oliveira, brought the top prize in three-down football to their former high school for students and staff to enjoy. Oak Park held an assembly for their two heroes and played a highlight video that included some of their top plays from their high school football days with the Raiders. 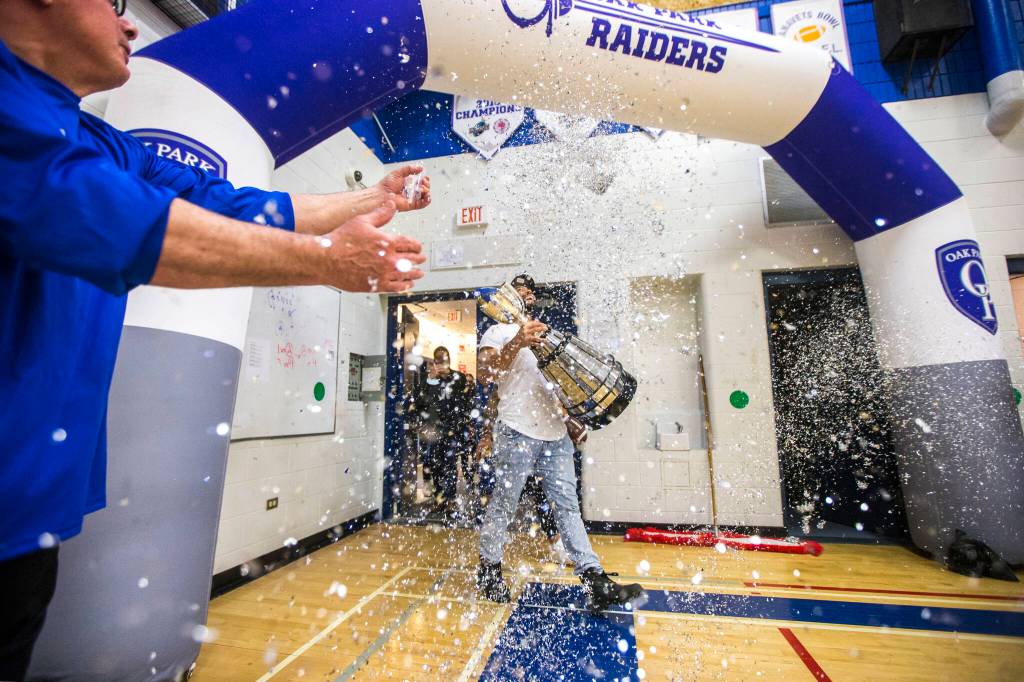