Every spring Hawks fly back into title series

FOR the past three years, Dillon Smith has done exactly the same thing in April -- win a Manitoba Major Junior Hockey League championship with the Charleswood Hawks.

FOR the past three years, Dillon Smith has done exactly the same thing in April — win a Manitoba Major Junior Hockey League championship with the Charleswood Hawks.

Smith, the 20-year-old captain, and the Hawks will go for the quadruple crown tonight at 7:30 at Eric Coy Arena. Charleswood leads the Fort Garry/Fort Rouge Twins 3-1 in the best-of-seven final series for the Jack McKenzie Trophy.

The series is a rematch of last year’s finalists. The Hawks have won eight of the past 10 MMJHL titles.

“I grew up watching Charleswood and coming in, I had a pretty good idea what it was all about. That’s why I’m here, to be part of this winning tradition,” said Smith, who won his first title with the Hawks in 2009 as a call-up in his Grade 12 year. He was captain of the Oak Park Raiders team that won the provincial high school hockey title that year.

The Hawks put up overtime wins in the first and third games of this final series, with the Twins earning a 4-1 win in Game 2. Then the Hawks exploded for a 9-1 win last Sunday.

“We came into the last game with the mindset that we were down in the series, down a couple goals and that we’re not winning this series right now,” Smith said. “We played desperate hockey, getting the pucks in deep, and that really helped us.”

The Twins have been led by a core group of players that were coached in AA peewee (11-12) by Twins coach Michael Gillam — seven 21-year-old players and forward Jesse Brolly, who won three championships with the Hawks, but was released this season.

MMJHL players can play at age 21 provided they played the previous season in the league.

“There’s no question that having a veteran team has helped us out. We’ve been down in every series this playoffs so far,” Gillam said, noting his team was down 2-1 and 3-2 to the Raiders before winning that semifinal series. “They’re a resilient bunch and they just keep coming. I can’t wait. It’s bad taste because we got beaten by a better hockey team on Sunday but I haven’t seen the same Twins team play twice in a row all year.”

“Honestly, ‘three-time defending champion,’ … it’s nice to say from an organization standpoint, but this is all new for most of our players,” said Hawks’ head coach Stephen George. “The Twins have really tested our team defence and that’s where our goaltending has been a real key. Also, the last couple games, our forecheck has been a huge factor in our success, especially Sunday night.”

In goal, Hawks’ Lucas Felbel (1.67 GAA) has played all but one of his team’s playoff games while the Twins have been led by Charlie Pogue (3.23 GAA), who was acquired from the St. Vital Victorias at the Jan. 10 roster deadline. 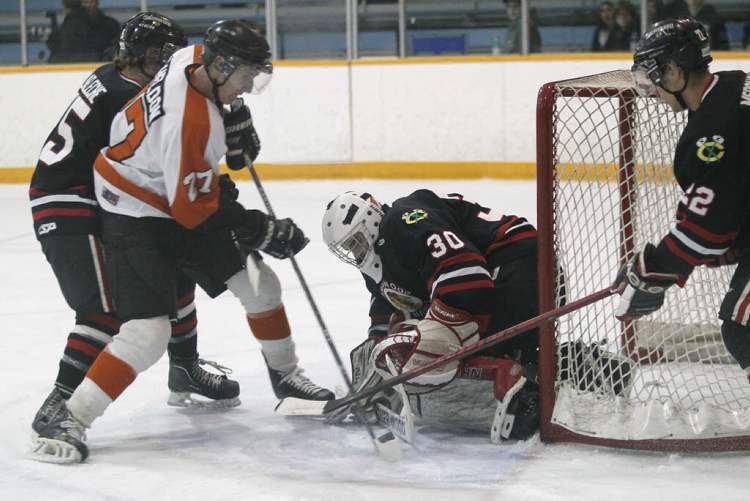