Call me Ahab. Well, maybe not any more, since my obsessive and seemingly fruitless hunt for good mussels has finally paid off. The flavourless bits of pork jowl were unnecessary, but Deseo's mussels were mussels as they ought to be, and always used to be -- plump, satiny, bursting with saline juices, finished here in a lovely and slightly nippy apple cider sauce that complemented but didn't overwhelm them.

Call me Ahab. Well, maybe not any more, since my obsessive and seemingly fruitless hunt for good mussels has finally paid off. The flavourless bits of pork jowl were unnecessary, but Deseo’s mussels were mussels as they ought to be, and always used to be — plump, satiny, bursting with saline juices, finished here in a lovely and slightly nippy apple cider sauce that complemented but didn’t overwhelm them.

Actually I wasn’t surprised. My reviews of Scott Bagshaw in his previous three venues were all positive, and I have always admired his cooking, if not his rhetoric. So I came to the new Deseo expecting delicious food and, with a few exceptions, I got it.

This new Deseo is a far cry from the old one, which I liked, although some found it seedy. It’s a far more polished venue, with a bright upstairs room and a cosier, brick-walled main floor, softly lit by a little forest of exposed-filament light bulbs overhead (so soft, in fact, you may need a flashlight to read the bill).

Upstairs seems to be the staff’s preferred seating area, and on two visits, when there was no one to greet us at the door, we had to go looking for permission to sit downstairs. Permission was granted each time by staff who were consistently friendly, charming and — with the exception of one dinner, about which more later — efficient.

The eclectic menu sports global influences — Spanish, as often as not. The Small Bites, from $5 to $16, are relatively pricey for their size. Some are almost small enough to qualify as tapas, such nibblers as caramel popcorn or baked olives. The more substantial dishes come in at the higher end of the price range.

Tops among them were those wonderful mussels, and the equally impressive seared scallops — big, sweet and juicy, balanced on a purée of miso-enhanced celeriac and topped by a dab of caviar. Other excellent choices were chicken albondigas meatballs in a forceful peppery soffrito and (although it could have been crisper) the ultra flavourful Nagano pork belly with peach kimchi. And what a treat to once again find sweetbreads — crunchily fried chunks, with a poached egg, black bean hummus and bits of panchetta.

Big Bites range from $17 to $29, although some daily specials do run higher. But a $32 special — slices of Juliet steak with wild mushrooms and a few tiny peas in a Périgourdine sauce, paired with a pavée of sliced potatoes — was one of the best dishes I’ve had in ages.

What is a Juliet steak, we had asked our waitress, who thought it might be the heart of the fillet but wasn’t sure. Google wasn’t much help — one source defined it as a rib-eye, another as a shoulder cut. Whatever its origin, it was meltingly tender and full of flavour, and the sumptuous truffled sauce was sheer glory, made, not with that often untruffle-like truffle oil, but studded with little cubes of the real thing — those fabulously aromatic black fungi, for which I’d forgive a multitude of sins.

Another great dish, listed simply as Young Chicken, isn’t as simple as it sounds. Partly boned pieces of chicken are stuffed with lobster, garnished with Brussel sprouts and a navy bean purée, and strewn with truffles — more of them than in the steak sauce, and in slices.

There’s comfort food too, in the robust Mac and Cheese, for instance, with a Spanish twist in the smoky paprika sauce, manchego cheese, and dusting of chorizo crumbs. Or in the fork-tender short ribs with a hint of anise in the jus and nicely cooked bok choy, although I’d have preferred mashed potatoes to the far-too-heavy potato dumplings, and the bland Marcona almonds — not toasted, roasted, fried or salted — just seemed like an afterthought.

Half of the Duck Duo was a perfect, slightly pink sliced breast, but the other half was a “terrine” of the leg meat, which turned out to be just minced duck, mixed with some bitter ingredients that masked its flavour. The Rabbit “Ragout” also turned out to be minced, but it tasted delicious. Two daily specials though — leaden gnocchi, and a skimpy serving of watery lobster risotto, with barely a token amount of lobster — were complete disappointments.

I’m reasonably certain I got through two meals without being recognized, as well, I suspect, during the first three courses of a third. We’d ordered two small plates and two large ones to share, and asked to have them served one at a time. Our waitress was enthusiastic about the idea, but then proceeded to bring each dish well before we’d finished the previous one.

The last straw was the Juliet steak which, we’d been told, would be served medium-rare, but not only did it come before we were halfway through the gnocchi, it came almost well-done. When we complained, we were asked if we’d prefer a different dish, but no, we just wanted the steak as it had been described. And then we waited, and waited, and waited — I’m not sure for how long, but it was more than half an hour after it occurred to me start counting.

And as I’ve noted, it was worth the wait. Moreover, Bagshaw came out of the kitchen to apologize personally, and to tell us the dish would be comped, and dessert as well. Had he recognized me? I have no idea, but it was the gracious and proper way to handle a complaint.

Desserts are few but the rich, saffrony creme brªlée ($8) and brioche bread pudding in a rummy caramel sauce were both luscious ($9).

The wine list is extensive and well chosen. There aren’t many bottles under $30, but a $7 glass of the extra brut Chilean Valdivieso can add a festive and affordable sparkle to your meal.

To see the location of this restaurant as well as others reviewed in the Winnipeg Free Press, please see the map below or click here. 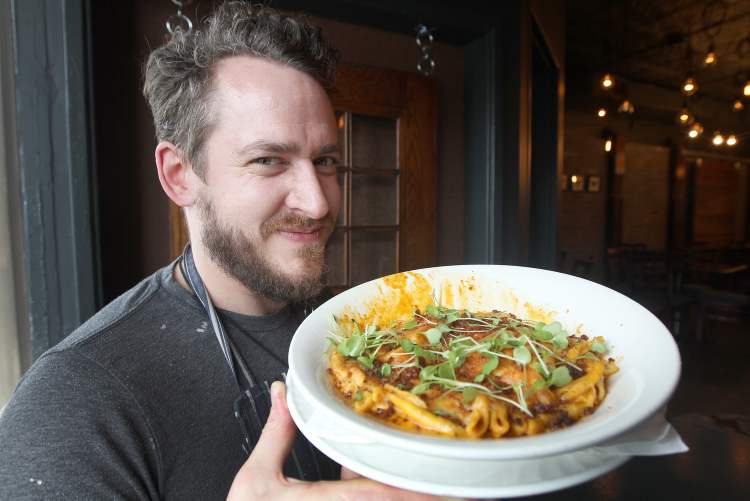 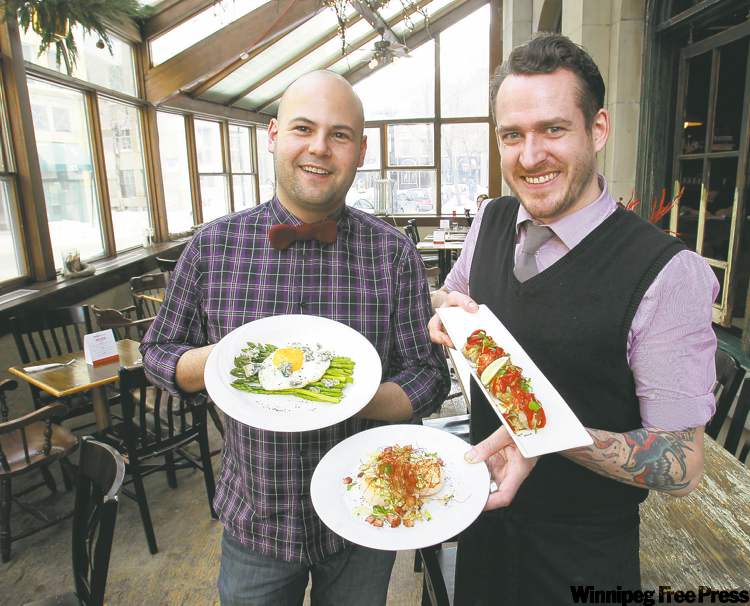 Four and a half stars out of five