The 2019 Grey Cup champion Blue Bombers were invested into the Order of the Buffalo Hunt, which is one of Manitoba’s highest honours and given to those who display leadership and service.

The 2019 Grey Cup champion Blue Bombers were invested into the Order of the Buffalo Hunt, which is one of Manitoba’s highest honours and given to those who display leadership and service.

Willie Jefferson — the Winnipeg Blue Bombers’ defensive end with the wingspan of a B-57 who routinely knocks down opposition passes — has become one of our province’s greatest ambassadors. During games, Jefferson regularly turns to the camera and says, ‘Come on down to Winnipeg!’ And after helping the Bombers to another Grey Cup last year, Jefferson became a true Manitoban when he moved his wife and daughter north to make their permanent home in our city.

The Métis buffalo hunters of the 1800s, who gave their name to the Order, followed the Red River Trail south from the community of Red River in long cart trains before veering west. Theirs was a highly regimented strike force, much like the Bombers. The elected captain would remind the eager hunters of the Eight Laws of the Buffalo Hunt.

● Law 2: No one is to fork off, lag behind, or go before without permission.

● Law 3: No party or person is to run buffalo before the general order.

Jefferson would have had no problem complying. He continually places the good of the team before his individual accomplishments, and is quick to pass on all praise to his coach and his ‘brothers’ around him.

Jefferson’s deserved place in the order is also demonstrated by how quick he is to acknowledge God for all His help. Modelling that spirit of dependence, the departing buffalo hunters of old would ask the local bishop to pray for them as they departed.

The Bishop of St. Boniface would bestow his blessing and then remove himself from the scene as promptly as dignity would permit. The cacophony of shrieks and howls that ensued as the expedition got under way might have arisen from the pit of the damned. The unearthly din emanated from the ox-drawn conveyances, two-wheeled affairs known as Red River carts.

We wanted to follow the example of the buffalo hunters in asking for blessing as we started on our own creaky ox-cart journey. (Truth be told, I wouldn’t want to take one step out of my front door without God’s hand guiding us, never mind an eight-week journey in a tired ol’ time machine.) I asked several people to pray. Jim Bear, a descendant of Chief Peguis, and James Bone represented the Anishinaabe people, through whose traditional lands we will be passing. They prayed for us and dedicated us, cart and ox to the Creator with a smudge.

Guy Gosselin, descendant of Jean-Baptist Lagimodière and Marie-Anne Gaboury, represented the Métis, who were the developers and drivers of the Red River carts. Andrew Micklefield, himself a first-generation Canadian and MLA for Rossmere, recognized that the newcomers of Red River would become dependent on the goods that would travel up and down the Red River Trail.

All this happened in the hallowed spot — Upper Fort Garry — where Louis Riel established Manitoba’s first government. Where he followed the example of the buffalo hunters by invoking the Creator’s blessing on a new province. And incorporating the Creator’s name — Manitou — into our province’s very identity.

Other Orders of Business

● Law 1: No buffalo are to be run on the Sabbath. Again, we hope to follow the pattern of the buffalo hunt. In addition to taking Sundays off for rest, we want to take Thursdays off for writing. We have no desire to be associated with the offenders.

● Law 5: For a first offence against these laws, the offender is to have his saddle and bridle cut up.

● Law 6: For a second offence, the coat is to be taken off the offender’s back and be cut up.

● Law 7: For the third offence, the offender is to be flogged.

● Law 8: Every person convicted of theft, even to the value of a sinew, is to be brought to the middle of the camp and the crier is to call out his or her name three times, adding the word, “Thief!” each time.

● Law 4: Every captain with his men, in turn, are to patrol the camp and keep guard.

We happen to be short a captain so we’ll have to settle for locking the door of our RV and praying that God will take care of our tired ox.

God’s Order Regarding a Tired Ox

Six days do your work, but on the seventh day do not work, so that your ox and your donkey may rest — Exodus 23:12

God’s declared care for my ox put a lot of warmth in my heart. At least until 3 a.m., three days out of Winnipeg, on a very cold and blustery night. That’s when He chose me to express His care.

With the wind rocking our RV, I couldn’t help thinking about Zik, our ox, exposed to the driving rain. I forced myself out of my cocoon of comfort and donned my raincoat.

With lantern in hand I urged Zik up and managed to get him re-staked behind the shelter of our RV. A literal baptism in what it means to be entrusted with an animal.

As part of our departure ceremony, I asked permission for crossing the lands of its Anishinaabe caretakers. I presented some gifts to Jim and Jason and asked them if they, representing the Anishinaabe nation, would grant us permission to travel over their traditional lands. It wasn’t just symbolic. If they had said ‘no’, we would not have gone. But they were very gracious and, under the authority of Brokenhead Chief Gordon Bluesky, blessed us on our way.

As we headed south, we took a midday break for Zik to fuel up on the beautiful greenway of a southern Winnipeg boulevard. After the ceremony we had just had, I didn’t have much desire to verbalize the name of the thoroughfare. If there ever was a worthy candidate for having his name expunged from a street sign, it was Bishop Grandin. His opinions on Indigenous people are difficult to read and I have no intention of putting them back in print.

A couple of weeks ago, my son, Simeon, and I were driving down said boulevard and having a conversation about the possible changing of its name. Sim asked me if I knew of any notable Indigenous women in Manitoba’s history. I saw the irony in where he was heading with this.

The first name to come to mind was that of a young Dene woman named Thanadelthur. As a teenage girl, Thanadelthur was kidnapped by a Cree band. She lived among her captors for more than a year, learning their Cree language and looking for an opportunity to escape. It was almost winter when she had her chance. By the time she stumbled into some goose hunters from York Factory, she was starving and barely alive. They took her back to their post, where she learned a third language — English. When someone was needed to make peace between the Dene and Cree peoples, guess who was the logical choice?

She left York Factory with 150 Cree delegates which, because of the hardships of the journey, had dwindled to a dozen by the time they got close to Thanadelthur’s homeland. Thanadelthur told the others to wait 10 days while she went ahead to look for her people. To her horror, she finally found them — 400 Dene warriors on their way to take revenge on the Cree.

For two days, with desperate pleadings, scoldings and logical reasoning, Thanadelthur tried to convince her Dene to make peace with their enemies. Finally her voice gave out but she had succeeded. On the third day the resolved warriors went with her to meet the delegates waiting for them. The two parties smoked a pipe and bound the peace. A peace ‘forced’ on them (to quote the writings) by a young Dene woman.

A woman of courage and of peace. An ambassador of reconciliation. I’d say that Thanadelthur is a worthy name for a south Winnipeg boulevard.

Terry Doerksen and his wife Patty departed Winnipeg on May 17. They were set to cross the U.S. border on May 26. 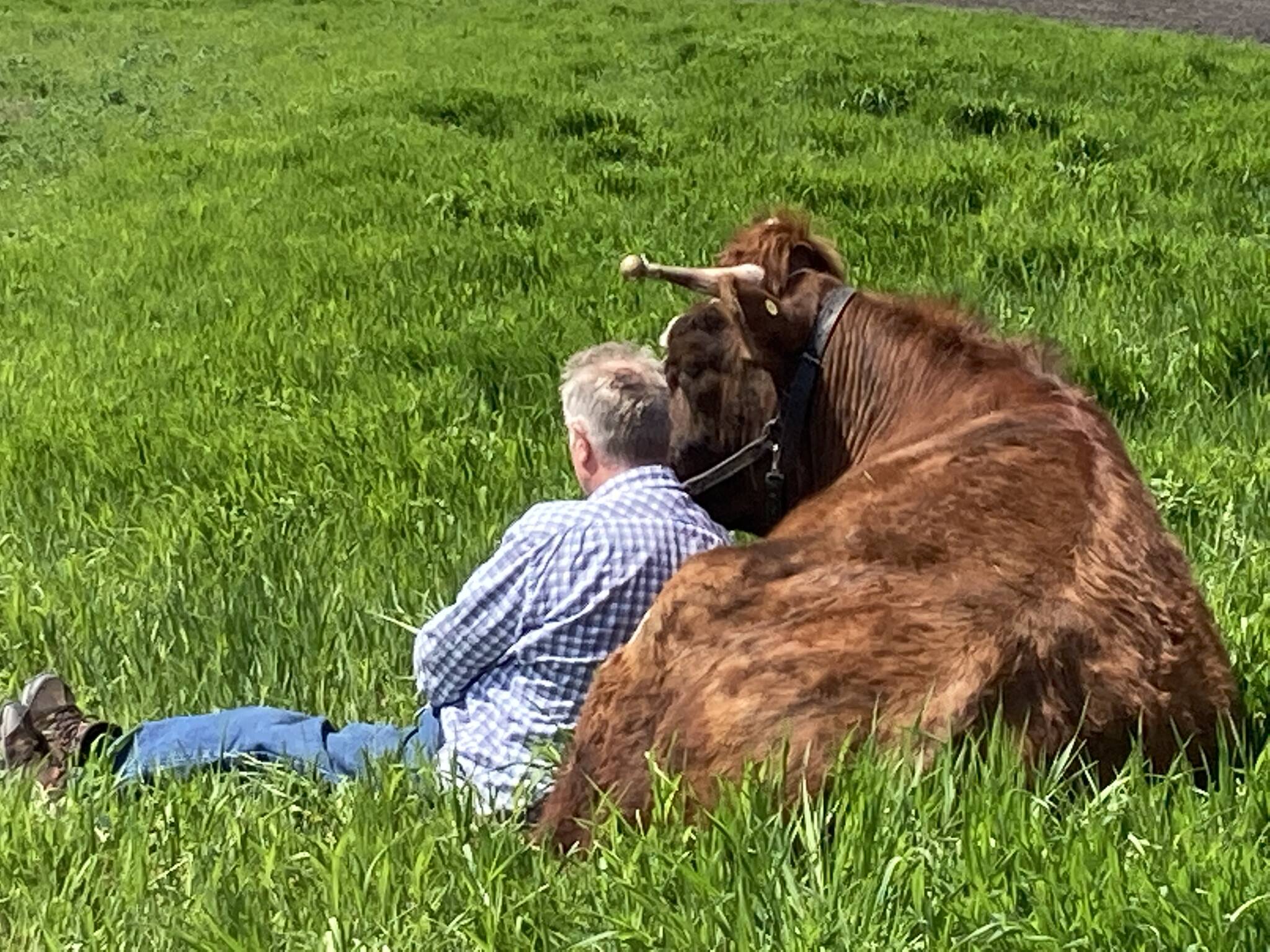 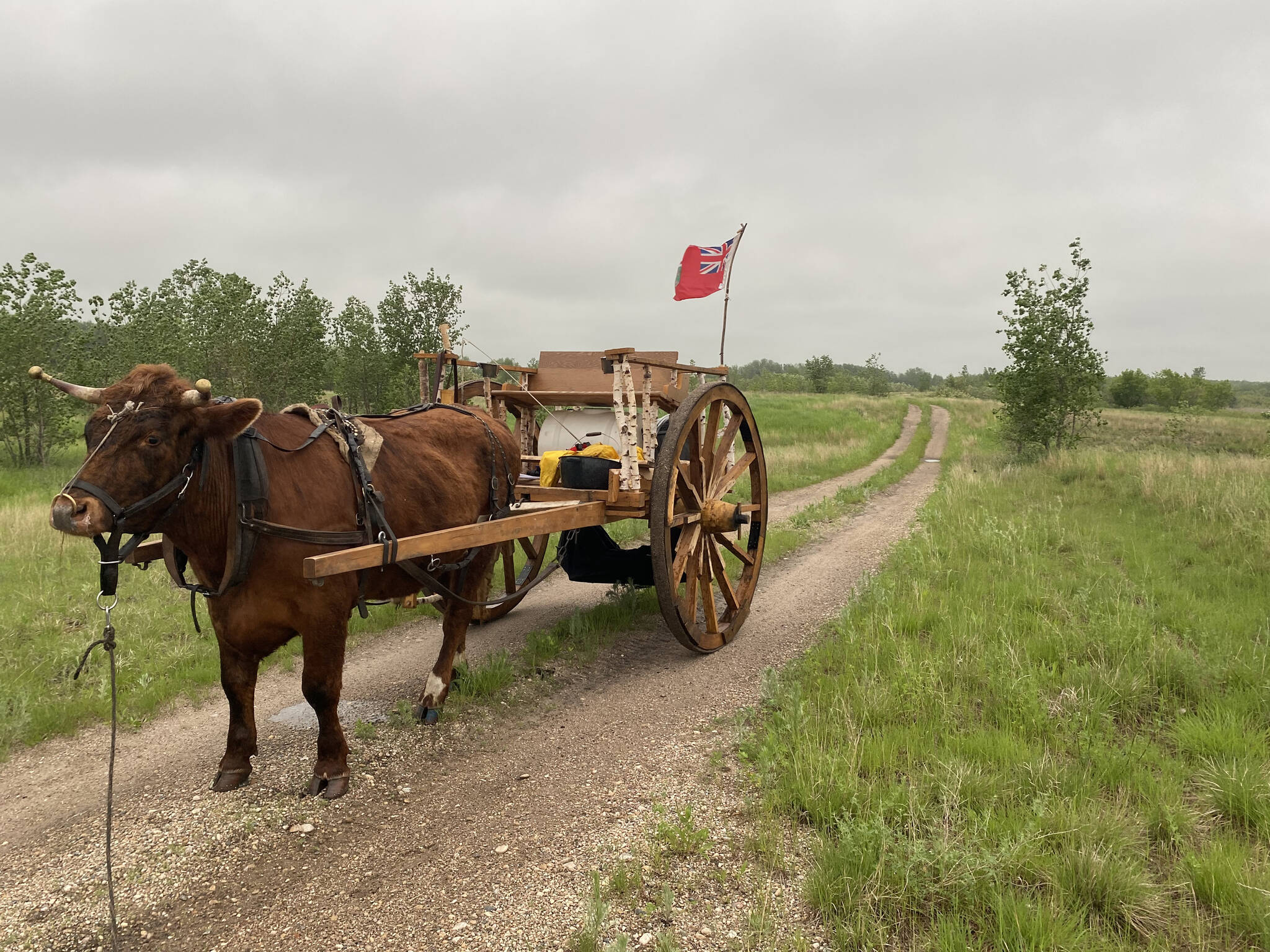 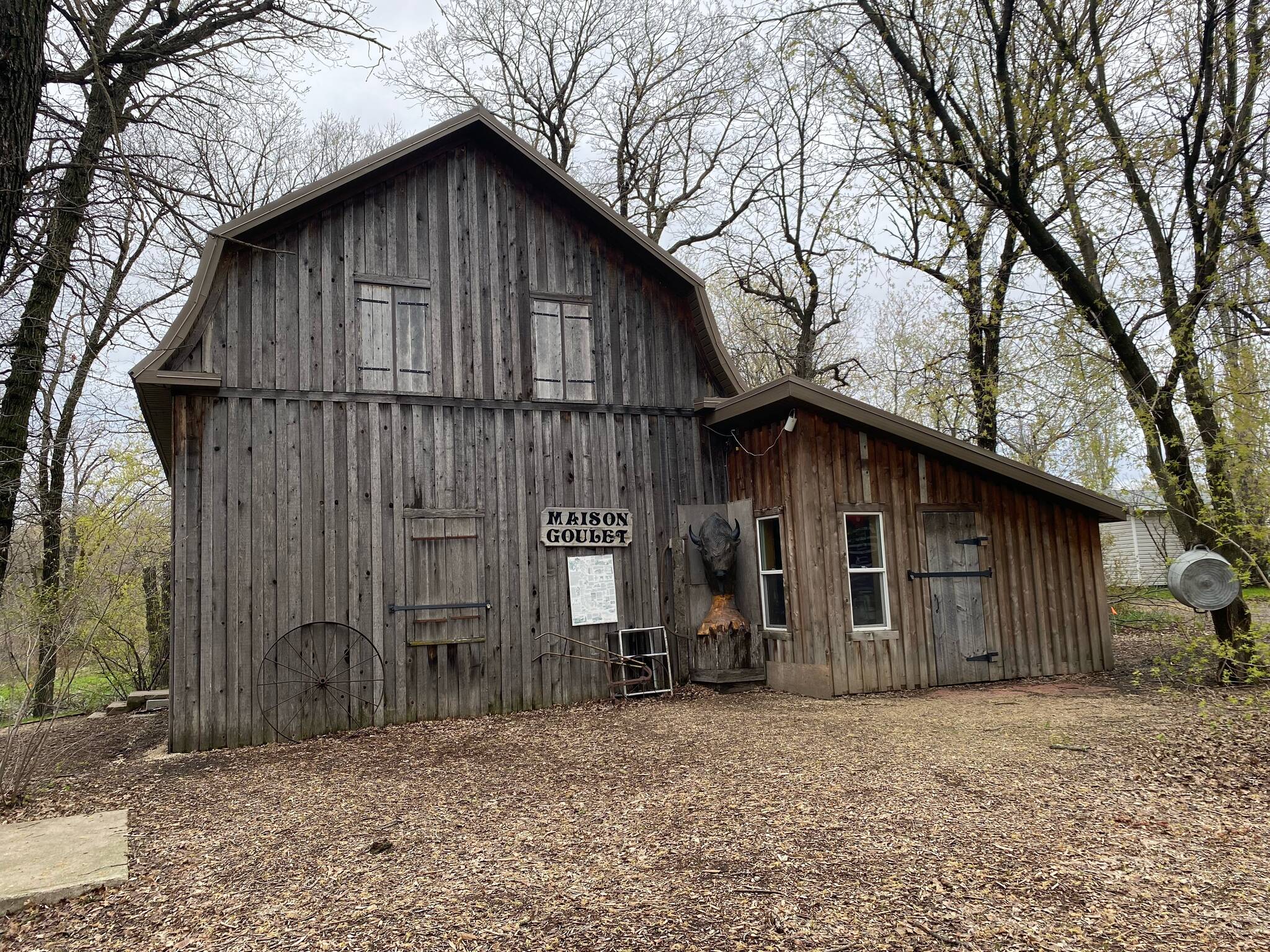 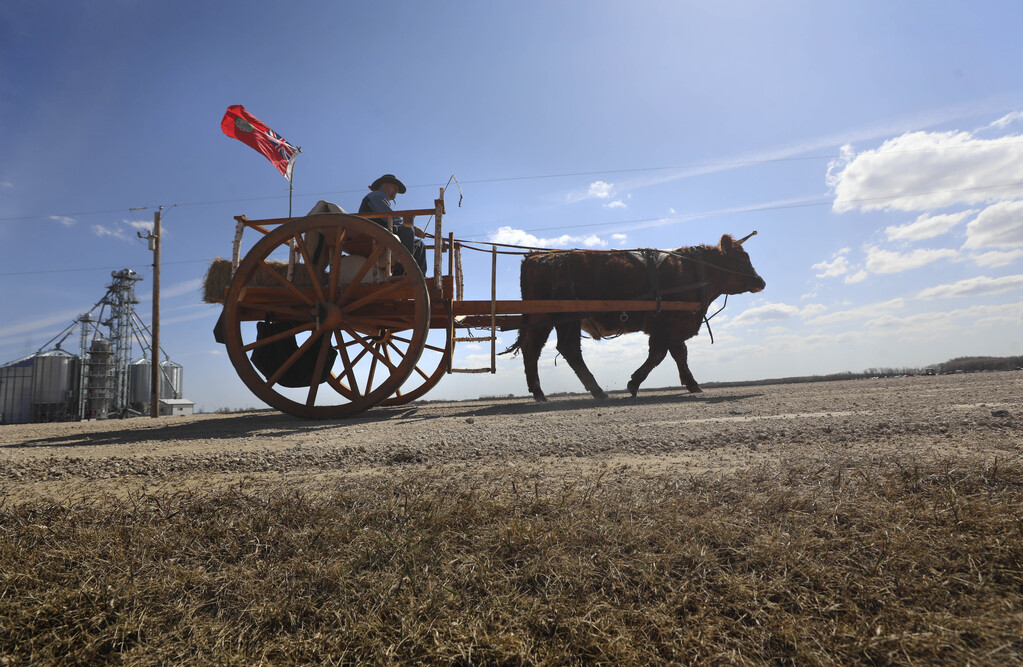 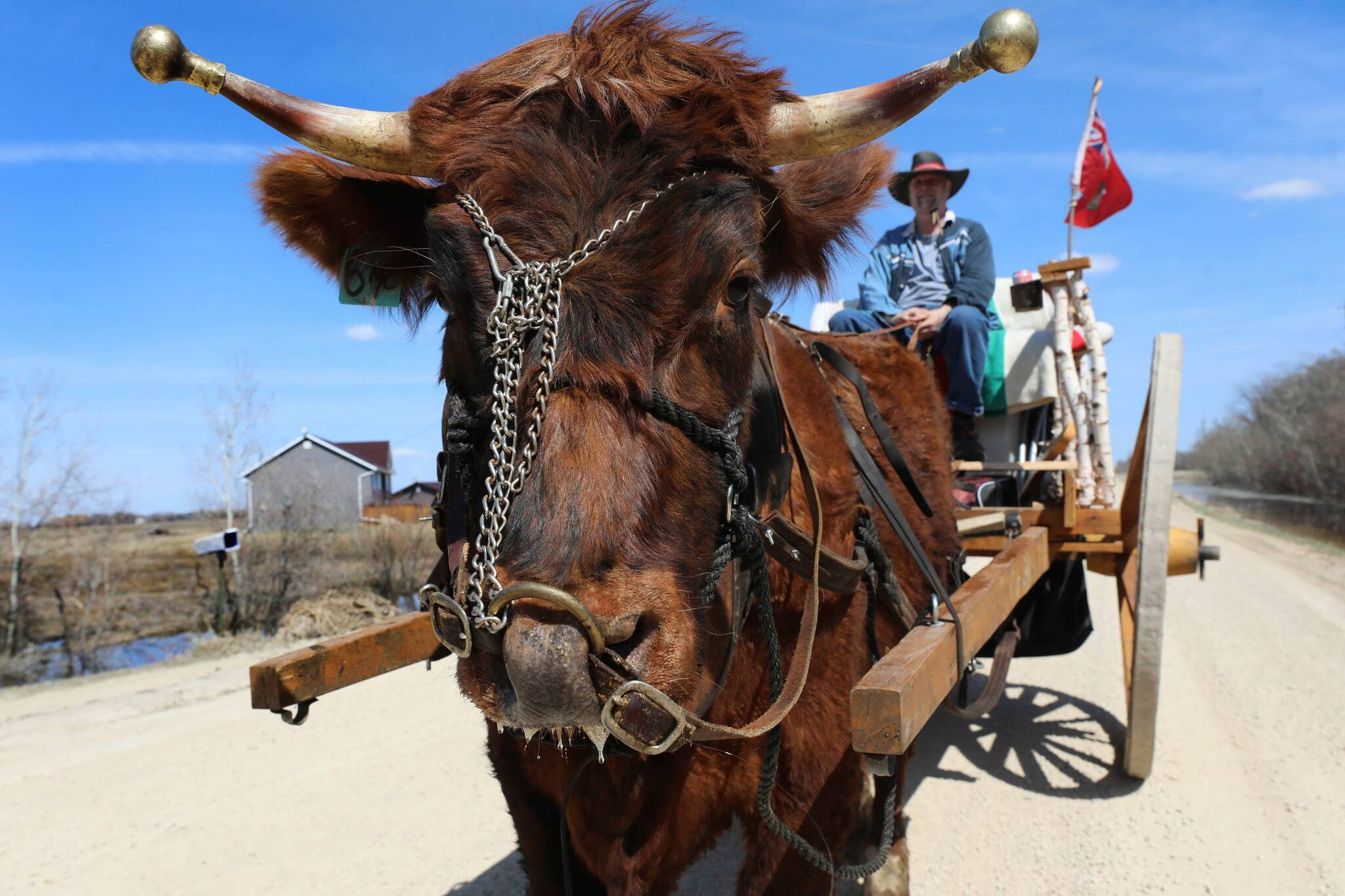 VIEW FROM THE OX CART

Winnipegger Terry Doerksen and his wife Patty are retracing the traditional trade route.

He is providing periodic updates for Free Press readers.