One Friday afternoon in May, a man named Terry Doerksen crossed Highway 8.

One Friday afternoon in May, a man named Terry Doerksen crossed Highway 8.

That’s not much of a story. Let’s try it again: One Friday afternoon in May, a man named Terry Doerksen crossed Highway 8 in a wooden cart pulled by a Shorthorn ox named Zeke.

“Whoa,” Doerksen said to Zeke as they approached the stop sign at Lockport Road.

Traffic was light, but still zooming by at 100 kilometres per hour. Even at that speed, the drivers took notice. One man driving an RV the other way down the road slowed down to make sure he wasn’t having visions. A woman in a sedan on the opposite side of the highway pulled over, whipped out her cellphone and started shooting a video.

Victoria Morse and Don Braun idled on their Harley Davidson Road King motorcycles, watching the commotion with a bit of confusion and wonder.

“That’s nostalgic,” Morse said. “That’s history,” added Braun. They shook their heads as Doerksen and two-year-old Zeke safely made their way from one side to the other.

“It’s just another version of two wheels,” said Braun with a shrug.

But the wheels are made of wood and they’re about as tall as Doerksen, an electrician from Winnipeg who had a different idea for a bucket-list road trip.

An RV or a motorcycle just didn’t do it for him. He wanted to travel hundreds of kilometres down one of the old Red River Trails to St. Paul, Minn., in a handmade ox cart built by his former boss.

But her husband was serious. A historical thinker, Doerksen was interested in going down a path not taken in about 150 years. In the 19th century, the trails were a central channel of international commerce. The Métis carts that traversed them were slow but sturdy, just like the animals that pulled them, and they could tote hundreds or thousands of pounds of goods across bumpy and sloppy terrain.

“Why am I doing this? The easy answer is I like history and I like to learn about it,” Doerksen says. “But not just that. I love to experience what people experienced back in the day. I love to smell and touch and see what they did.”

Then came the matter of procuring a beast of burden.

“Dennis, my ox guy, said a cow would work, but that I might have a better time buying a steer,” Terry Doerksen said. “So that’s when we bought Zeke the First. He was a Texas Longhorn, and he was an ornery cuss. He was out to gore me all the time. My life with Zeke the First was always at risk, so I thought that wasn’t the best relationship.” Zeke the First ended up going to the freezer.

Then came Zeke II, a Shorthorn and a more docile companion. For several months, Doerksen trained his new copilot by having him pull a sleigh in preparation for the journey, and when the season turned to spring, it was time to take the cart on the road in preparation for their grand journey of 870 kilometres, down to Pembina via the Crow Wing Trail and then through Minnesota to St. Paul — an eight-week trek at the blazing pace of two kilometres per hour.

Back on Lockport Road, the ox and the electrician made it to the other side, and Doerksen reached to his cupholder for a sip of grapefruit Bubly. In the back, he had a block of hay for Zeke should he need a snack.

On the other side, the pair were instant celebrities. A trio of children stood in the driveway, watching the traffic. Siblings Alex and Aleah Hofer had never seen anything quite like it, nor had Asenath Waldner.

As the cart continued, Wilfred Kleinsasser rolled down the windows of his SUV as he passed in the other direction. “You know what I like the best about that? No gas. $1.80 per litre right now. He’s a smart man.”

Doerksen, who is scheduled to leave on his cart journey on Tuesday, will be filing dispatches for the Free Press en route. He understands how strange it all looks and expects to be the subject of thousands of confused glances, dazed questions and likely a little bit of honking. “People are going to take pictures, I’m sure.”

His wife Patty is coming along for the ride, trailing in an RV or on an electric scooter. They’ll stop when Zeke needs rest, and rest where the shorthorn can graze. Last Thanksgiving, they did a short trip and found people to be quite hospitable.

At the very least, they’ll be interested: on a one-kilometre stretch of Lockport Road, Doerksen and Zeke were stopped several times by onlookers, making that two-kilometre-per-hour pace seem generous.

Five teenagers pulled up in a four-wheeler to check out what was happening on two. “We heard about an attraction of some sort over here,” said Ben Waldner, 16.

Waldner and Amy Kleinsasser, along with Micah, Stephen and Caleb Hofer, jumped out of the quad and raced over to greet Zeke and Terry. Then the questions started: where did you come from, where are you going, how fast does it go, is there any metal in the construction? Doerksen rattled through his answers patiently: Winnipeg; St. Paul; about two kilometres an hour; nope, it’s only made of wood.

“Would he be all right if I petted him?” asked Caleb Hofer asked of Zeke. Doerksen nodded.

Hofer extended his hand and began stroking Zeke’s snout, the underside of which was covered in a thick snot. Overhead, a drone piloted by a friend circled and captured aerial footage of the strange visitor.

With the sun beating down, Doerksen announced that he and Zeke had better get going. The teenagers sped down the road on four wheels. Slowly, the ox cart followed on two. 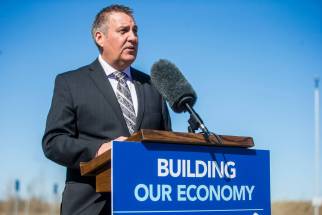 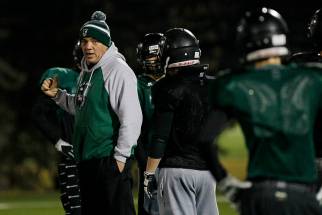 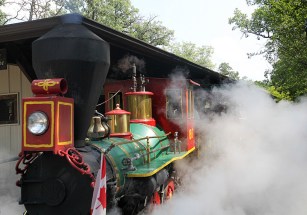 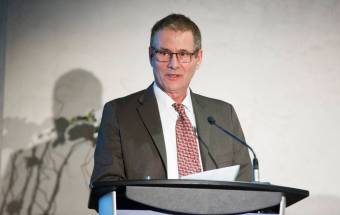 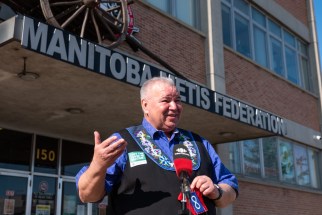 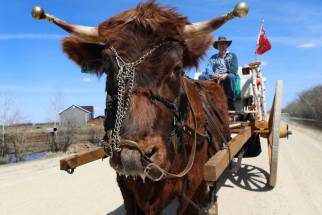 CFL is its own worst enemy 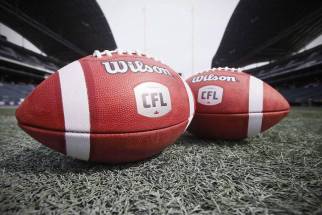 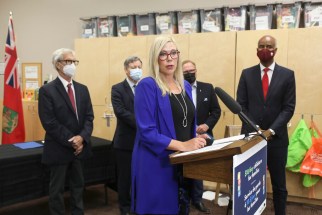