Proponents believe moving the CP rail yards would transform the city, but money and political will are likely in short supply

University of Winnipeg president and North End native Lloyd Axworthy calls it a psychological barrier between rich and poor, “them-and-us kind of stuff.”

“We really have a tale of two cities,” adds NDP MP Pat Martin. “And the great divide has always been, since 1882, this CP Rail yard track.”

One hundred years ago, a city study described the North End as “practically a district apart from the city.” Crossing the tracks meant a hike to one of only two bridges or a dangerous sprint across the rails, dodging trains. People who lived north of the tracks, then mostly eastern European immigrants, were “not of desirable character.”

In the words of urban historian Alan Artibise, the railroads that bisected the city helped turn Winnipeg into “an unco-ordinated and socially disruptive series of self-contained ghettos.”

That hasn’t changed today, and neither have the tracks, a vast physical reminder of the city’s segregation, the barrier that isolates one of the densest, most diverse, most vibrant and most disadvantaged parts of the city from the rest.

The symptoms of the North End’s social and economic inequality are no mystery — the oldest and most overcrowded housing, the most murders, the poorest health, among the lowest median incomes and the lowest employment and education rates.

Moving the CP Rail yards is not a new idea, nor would transforming the land into a modern mix of housing, parks, schools and businesses that connect the North End with the rest of the city solve Winnipeg’s entrenched poverty problem. But it could be a transformative project in a city that shuns transformation.

It hasn’t really been on the radar since the guy who is now Manitoba’s bookish premier was a long-haired, inner-city rabble-rouser in the late 1970s, but that might be about to change.

In meetings over the last few months with some of the province’s top politicians, the Social Planning Council of Winnipeg has made a pitch for a two-year, $1.5-million feasibility study that would lay out the cost of moving the yards and where they could go, how contaminated the site might be, how much development revenue could accrue and what a public consultation plan might look like.

In their 30-page pitch, the council cites five key reasons why now is the perfect time to launch a public debate about transforming an industrial blight into Winnipeg’s most innovative neighbourhood.

— Winnipeg is growing, thanks to a boom in immigration, and there’s a need for a whopping 83,000 new housing units over the next 20 years. Already, the city’s vacancy rate for affordable housing is near zero, and attempts to increase the number of units have barely dented the problem.

— After decades of suburban growth, the city’s new long-term plan favours infill development and higher density. The rail yards are a remarkably poor use of prime downtown land at a time the city is desperate to expand its tax base and shrink its footprint and when every urban expert says density is the key to a thriving, vibrant, sustainable city.

— The two bridges over the rail yards — the Slaw Rebchuk and the Arlington — are in need of major repairs in the coming years. For example, the city’s capital budget notes, within the decade, the Arlington Street Bridge will need to be replaced or rebuilt. Already, $3.5 million is earmarked over the next five years to do a transportation plan, structural evaluation and conceptual design.

The social planning council is too polite to note that, at a time city hall is saddled with a multi-billion-dollar infrastructure deficit, repairing and building bridges over rail yards instead of moving the yards themselves is like throwing good money after 130 years of bad.

— Rail is greener and cheaper than trucking, and the industry is booming — CP Rail cleared $570 million in profit last year. With dramatic technological improvements in logistics and intermodal shipping, many argue the Logan and Weston yards are outmoded, though CP Rail officials say they “meet the company’s operational requirements.” Both the Weston repair yards and the Logan marshalling yards were built not last century but the one before. Several people the Free Press interviewed agreed they aren’t ideal, either too small for the kinds of two-kilometre trains now marshalled outside the city or too big for a system looking to consolidate and modernize facilities. For example, CN’s Symington Yards in St. Boniface are much larger, more high-tech, better located and handle twice the intermodal traffic than CP’s bottlenecked intermodal yard off Keewatin Street.

— CentrePort Canada, the agency charged with creating an inland rail, truck, air and industry hub in the city’s northwestern corner, could spawn a major rethink of Winnipeg’s transportation infrastructure. And the agency is in the middle of exploring the wheres, whats and hows of a common-use rail facility, some kind of terminal CP Rail, CN Rail and BASF can all use to better link train transport with trucking and industry. Staff at CentrePort Canada are quick to rein in speculation that their common-use facility might be a potential solution to Winnipeg’s North End rail woes or offer a new home for CP’s Weston and Logan yards. That’s not what they’re planning. Still, say proponents of rail relocation, CentrePort offers Winnipeg even more economic incentive to rethink rail, and the common-use facility might be a first step.

Lewycky said all this and more when he made a pitch for a feasibility study in recent meetings with Local Government Minister Ron Lemieux, Mayor Sam Katz and staff in the office of Vic Toews, Manitoba’s senior federal minister.

“When we walked in, everyone was skeptical, very, very skeptical,” said Lewycky.

After a half-hour of chat, though, the politicians appeared more receptive to the idea, he said. But, the Social Planning Council of Winnipeg hasn’t received an official bite on its proposal and is moving on with the next step — consulting and meeting with some of the city’s movers and shakers in the business industry.

First, though, a reality check.

So far, no champion has emerged to really launch the issue of moving the rail yards into the public’s consciousness and into the deep reaches of government.

Pat Martin has been a lone voice on rail relocation for nearly a decade, but no senior politician in power has been willing to suggest the city embark on the costly and complicated quantum leap forward that moving the rail yards represents.

Generally, the federal government has not shown much interest in championing major urban-development projects, and the city hasn’t either. In recent years, infrastructure cash has been spent on small-scale projects — community centres, sewage treatment and roadwork.

That leaves the province. Many believe Premier Greg Selinger is likely far more sympathetic to the idea of moving the rail yards, given his activism on the issue in the late 1970s and early 1980s. But the province is cash-strapped and risk-averse, and Selinger said during last fall’s provincial election moving the rail yards was not a top priority.

“This is ‘dare to dream big dreams’ kind of stuff,” said Martin, noting Winnipeg is among the last cities to straddle huge inner-city yards, and it’s time the North End had the same kind of IKEA-style investment that seems to automatically accrue to the south end.

“There’s a paucity of big dreamers around.”

In most cities where rail yards have been redeveloped, the catalyst has been the rail companies declaring a yard surplus. That’s how The Forks began and how Edmonton’s old CN Yards became the site of a huge, architecturally interesting college, hipster condos, lofts and student housing with stores and a weekend farmers market nearby.

CP Rail has never publicly suggested they are ready to abandon the Logan and Weston yards and was reluctant to broach the subject, despite repeated requests for an interview.

CP, as with most rail companies, tends to be conservative, slow-moving and, lately, very successful. They’re in the driver’s seat and largely immune to public pressure from politicians, inner-city activists, urban planners and newspapers. Getting them to move would likely cost tens, if not hundreds, of millions of dollars.

And if reducing social and economic inequality is one of the goals of rail relocation, there may be better ways to spend millions of dollars on grassroots needs rather than grand schemes — more affordable housing, more daycare spaces, raising welfare rates, improving inner-city schools. The list is endless.

Jino Distasio, director of the U of W’s Institute of Urban Studies, says the city should not be so quick to give up what could be a strategic asset at a time when rail transport is the wave of the future.

Distasio says he is certainly open to the idea of a mixed-use neighbourhood blossoming on a brownfield blight, but Winnipeg’s position in the global trade network needs to be examined first.

The yards are part of a huge and complicated transportation network with tentacles that reach into Mexico, to the Port of Churchill and beyond. Enhancing that network has been a key priority for all levels of government in recent years, the subject of many studies, trade missions, North American transportation task forces and major funding dollars.

The city would be foolish to give up a strategic asset such as the CP Rail yards without seriously considering other options, including the idea of transforming the yards into a modern, low-impact, high-tech industrial corridor, one that even includes housing and training facilities, said Distasio.

“I think this equation is more complex.” 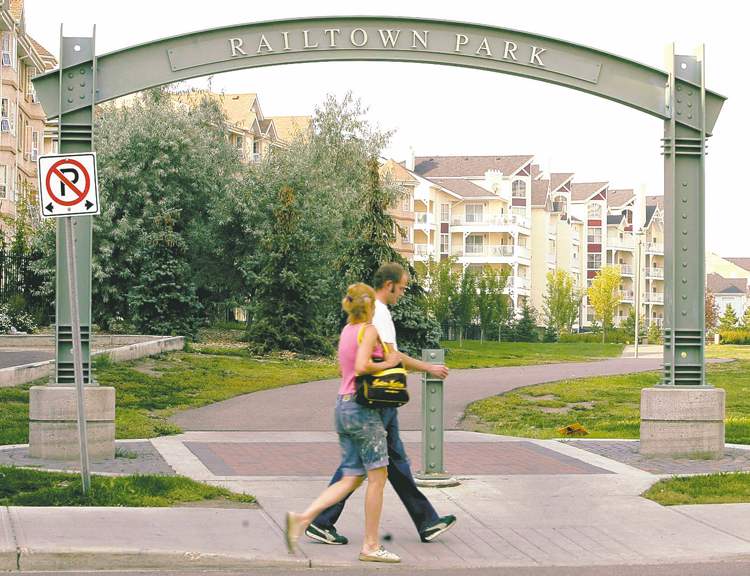 Your Turn: Share your vision for the rail yards 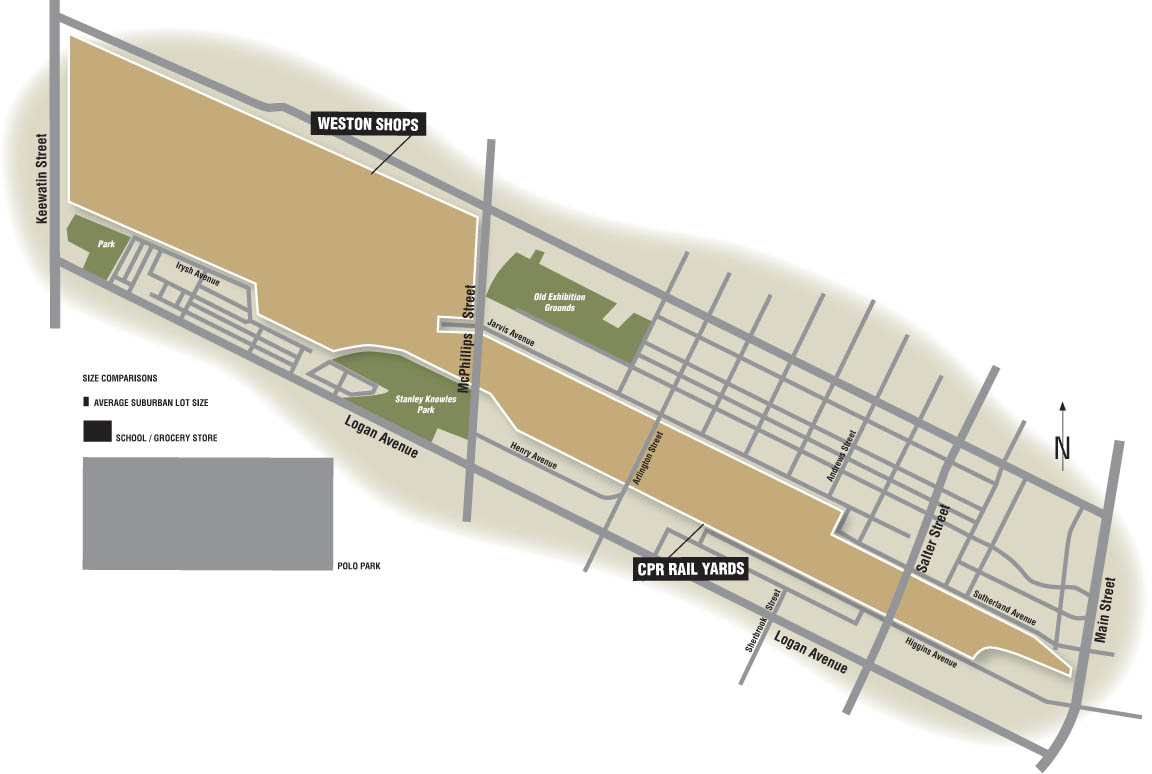 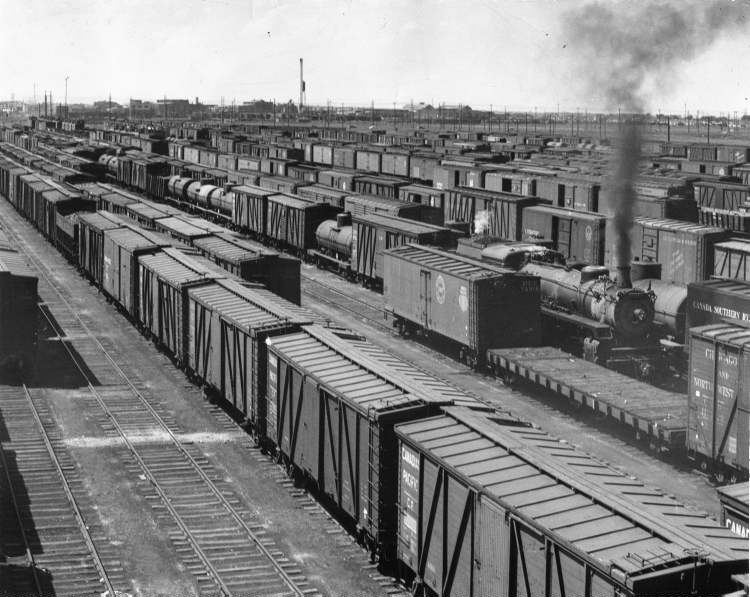 Yards of Reports
The CP Rail yards over the years 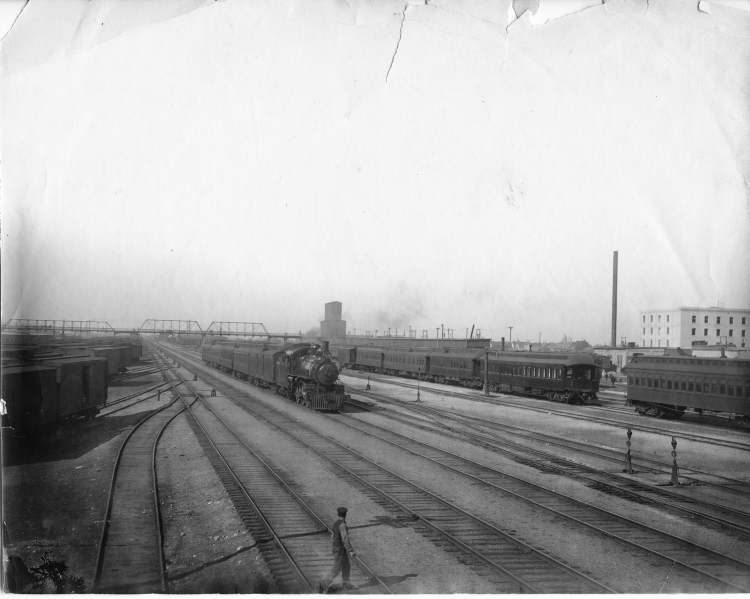 SIZE: 195 hectares, almost twice the size of Assiniboine Park. That includes the Weston yards and the Logan yards.

VALUE: $38 million, according to the latest assessed value.

WHAT HAPPENS THERE?: The rail yards are like CP’s own personal Trans-Canada highway. Every bit of grain, oil, coal, lumber, automobiles and manufactured goods going east or west comes through Winnipeg on 23 to 26 trains every day.

The Weston yards, behind the McPhillips Street Station casino and closer to Keewatin Street, is where CP repairs cars and locomotives. That’s also where CP’s small intermodal terminal is, where trucks pick up and drop off shipping containers.

This month, the Free Press will explore some of the big, messy questions that plague the rail yards: How much will it cost to move them? Who should pay? Is there any political or community will? Should this be a civic priority? What have other cities done with their yards and what could we build here?

New documents, stories, videos and photos will be posted regularly online. You can already read a batch of studies, including a 1985 academic paper on the topic by Premier Greg Selinger.

Later this month, the Free Press will host a public forum and brainstorming session at the News Café.

In the meantime, you can download a map of the yards, start sketching your vision for a new neighbourhood and send us the results.

If you have any questions, story ideas or angles you want the Free Press to tackle, please email maryagnes.welch@freepress.mb.ca, join the Twitter conversation under the hashtag #railyards and visit http://wfp.to/offtherails to comment on stories.