Beloved barefoot Aussie Xavier Rudd headlined Sunday night’s mainstage show, marking his fourth time at the festival since 2004. Rudd is such a folk fest fixture, it feels as if he’s played more than that. It makes sense he was chosen to close the 40th-anniversary iteration; whether it was your first time seeing him or your fourth, an Xavier Rudd show is always an ethereal experience.

Rudd is also kind of the poster boy for the folk fest experience. Half the world away and he was among his people — particularly the unwashed, dreadlocked masses from the campground — singing about human rights, aboriginal rights and environmentalism. Not shy about his politics, he performed in front of a flag baring the skull-and-crossbones logo of the Sea Shepherd Conservation Society, a controversial direct-action wildlife conservancy organization.

He’s a powerhouse performer, a veritable one-man band handling percussion, guitar, vocals and, of course, didgeridoo on his own. At once. (He wasn’t flying totally solo; he had a drummer helping flesh out the bottom end.)

His extended instrumentals are kinetic; it’s physically impossible to sit still to his hyper-rhythmic jams. A nearly 10-minute rendition of Food in the Belly, from the 2005 album of the same name, was incendiary. On the whole, though, it was a more subdued, reggae-inflected performance from Rudd, perhaps picking up on a Sunday night vibe.

At press time, thousands were gearing up to join voice for The Mary Ellen Carter as part of the finale. Unofficial paid gate attendance wasn’t available at press time, but early numbers suggest it was tracking ahead of last year. Saturday’s attendance was pegged at 12,499. Wednesday night set a new record with an estimated 11,455 festival goers.

Prior to Rudd, Texan country rockers The Flatlanders — comprised of legendary guitarists Jimmie Dale Gilmore, Joe Ely and Butch Hancock — turned in a performance that was part alt-country, part golden AM radio and total six-string celebration. From cowboy/rockstar anthem Thank God for the Road, with its high-lonesome twag, to the ballad Rose on the Mountain — about transplanting a Colorado girl to L.A. where the air ain’t clean — The Flatlanders deal in true blue, ramblin’ man country. Their honky tonk ode to Dallas — “did ya ever see Dallas from a DC-9 at night?” — was a gem.

Living legends The Blind Boys of Alabama — a group founded by singer Jimmy Carter back in 1939 at the Alabama Institute for the Negro Blind that has gone on to win a fistful of Grammys — opened the mainstage show with a joyous, soulful set of uplifting gospel tunes. Looking dapper in silver suits, these gentlemen testified to an adoring crowd; practically everyone was clapping their hands. Their arresting mashup of two classics, Amazing Grace sung over House of the Rising Sun, was goosebump-raising thanks to the Boys’ golden harmonies. (These vets show so signs of slowing, by the way; they have an album out Oct. 1 titled I’ll Find a Way, produced by Bon Iver’s Justin Vernon.)

The daytime stages were also full of standout performances. After wowing with his tweener set on Friday night, which included an inspired cover of Lana Del Rey’s Video Games, Australian folkie Jordie Lane drew a huge crowd to one of the new forest stages, Little Stage in the Forest. It was easy to see why The Weakerthans handpicked him for their Australian tour; he effortlessly melds evocative, soul-stirring lyrics with pop-indebted melodies. Closer Black Diamond, a woodsy Neil Young-esque rocker, was elevated by bandmate Clare Reynolds’ gorgeous harmonizing.

Little Stage in the Forest and its neighbour, Spruce Hollow, were added this year to provide festival goers with a little more shade. They’re idyllic spaces to chill and watch music to be sure, but they’re situated a little too close together. Noise carryover marred a few sets over the weekend, according to a few disgruntled fans, but happily, Lane’s was relatively spared.

Rich Aucoin’s kids show at Chickadee Big Top was another highlight. The Halifax electropop experimentalist recreated Saturday night’s Big Bluestem dance party for the younger set, although there were just as many twentysomethings in attendance as toddlers. Little folkers loved his infectious art-rock anthems; a little boy with a popsicle-dyed mouth and smudged glasses was dancing and screaming with such uncurbed enthusiasm he got a special shout-out from Rich himself. 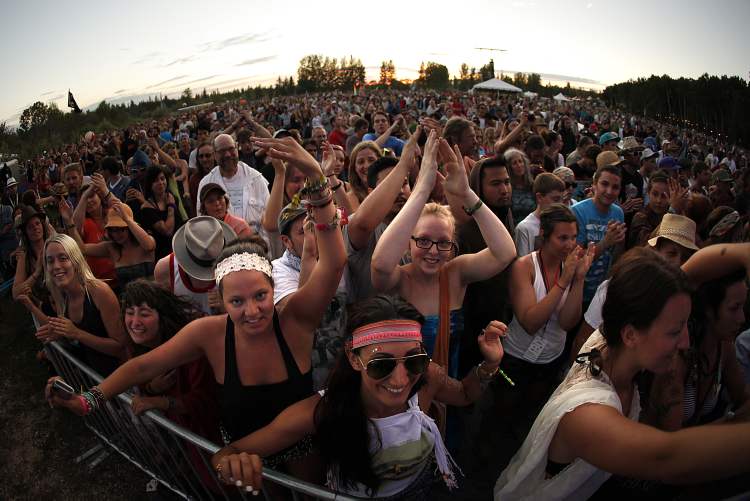