OAK HAMMOCK MARSH -- The Pallister government’s carbon pricing plan will cost Manitobans more money up front, but less over the long term compared to what Ottawa is requiring.

OAK HAMMOCK MARSH — The Pallister government’s carbon pricing plan will cost Manitobans more money up front, but less over the long term compared to what Ottawa is requiring.

Manitoba intends to impose a levy of $25 a tonne — or about a nickel a litre on the price of gasoline — but that’s as far as it is prepared to go. The federal government is insisting on a base tax of $50 within five years.

At a news conference Friday at a wildlife preserve north of Winnipeg, Premier Brian Pallister said his “made-in-Manitoba” plan will be more effective in reducing greenhouse gas emissions than Ottawa’s, and will cost an average household less money.

“The environment and the economy aren’t separate entities, they go together. And you cannot focus on one while ignoring the other,” the premier said.

Asked about whether he was willing to go to court to defend his lower-tax position, the premier said he hopes his plan will win in the court of public opinion.

“We have a better plan than the plan that they’re advocating,” he said of the federal government. “I don’t think they’ll win in court. But I would prefer that in the court of public opinion that we make clear to Ottawa that our better plan is the one supported by Manitobans.”

The federal government is requiring each every province implement a minimum $10-per-tonne price on carbon by the spring of 2018. The price has to rise by $10 per tonne per year until it hits $50 per tonne by 2022.

“If any province doesn’t move forward in an appropriate way, the federal government will ensure that the equivalent price on carbon is applied to the specific jurisdiction,” Trudeau said in Saint-Bruno-de-Montarville, just east of Montreal.

“We will respect what Canadians asked us to do and show the leadership on protecting the environment and growing the economy that all Canadians expect of us.”

Most other provinces have already agreed to follow Ottawa’s proposal; Saskatchewan is the only one threatening not to impose a tax at all.

Federal Environment Minister Catherine McKenna said Manitoba will be in good shape for the first few years of the carbon pricing plan.

“After that, they’ll need to up their game,” she said in a statement on her Facebook page. “The details matter.”

Over the next five years, the average Manitoba household will pay $240 less under the Manitoba plan than it would under the federal model, the province says.

But the cost within Manitoba households will be wildly divergent — natural gas accounts for 60 per cent of home heating, and will be taxed, while electric heating will not be taxed. How many cars and how much a resident drives will affect their costs.

A couple with two children, heating a home with natural gas and driving two vehicles, is looking at $356 a year in carbon taxes. A retired couple, heating with electricity and driving one vehicle, will pay an additional $54.

Manitoba faces a greater challenge reducing emissions because so much of its energy comes from clean electricity, the government says, and because agriculture will be exempt from a carbon tax. Agriculture in Manitoba accounts for four times the emissions that it does on a percentage basis on the national level.

The province claims its flat-tax approach to carbon pricing will actually reduce greenhouse gas emissions more — by 80,000 tonnes — than the federal model over five years.

Missing from the government’s announcement was how it will spend the estimated $250 million in annual revenues the new tax will bring.

Pallister said the government will be consulting with Manitobans on this issue in the coming months. He said an announcement will likely be made before next spring’s budget and, possibly, before the end of the year.

NDP Leader Wab Kinew said he’s concerned about the message the government is sending to Manitobans on carbon pricing at a time when hydro rates are anticipated to rise sharply in the coming years.

“It signals to people that once you adjust to the higher cost of fossil fuels, then you’re done with your transition,” Kinew said.

Kinew said he’s disappointed there was no plan for ensuring monies raised from the carbon tax would be used to mitigate climate change and lower the burden of increased costs on low-income families.

“A carbon price has to be tied to investments that help average families green their lifestyles, make choices that are better for the environment,” he said.

In a 56-page policy document released Friday, the government said Manitoba faces a greater challenge reducing emissions because so much of its energy comes from clean electricity. In 2022, a formal national review of the country’s climate policies and carbon pricing by governments will occur.

“We will resist as detrimental and unnecessary efforts by the federal government to impose a higher carbon price and additional carbon prices on Manitobans before this review,” the policy document says.

Under the Manitoba plan, large industrial emitters will pay a tax that’s based on how much their emissions exceed established performance standards. If their emissions fall below these standards, they will earn credits that they could trade with other large emitters.

Sustainable Development Minister Rochelle Squires said the “integration of the economy and the environment” will be the government’s focus.

Squires said the province’s green strategy can help improve recycling and reduce the amount of organic waste that goes into landfills. “The more we recycle, the more we reduce our emissions,” she said. 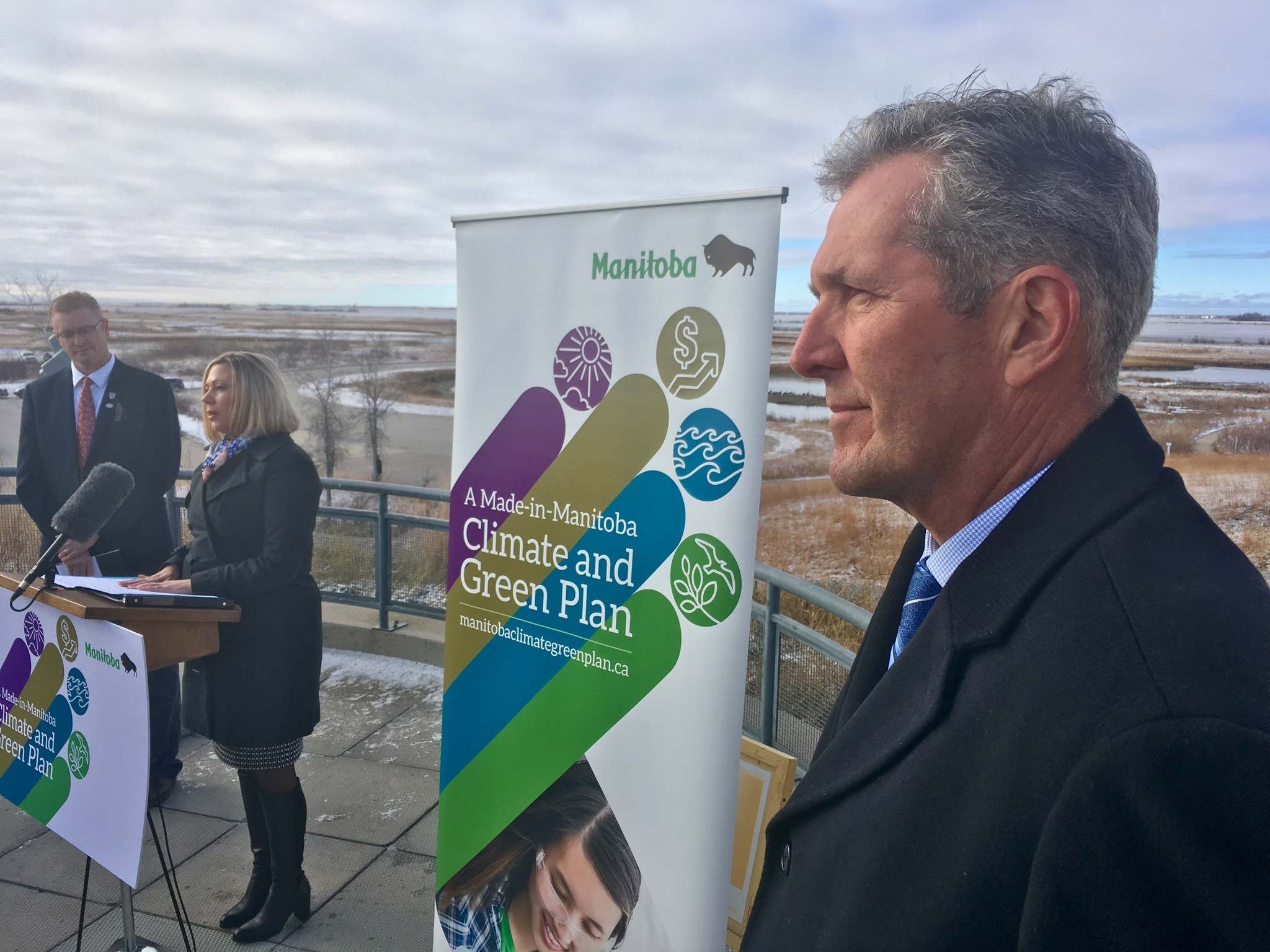 Winnipeg Chamber of Commerce president Loren Remillard: “We’re pleased the province has stepped forward on the defining issue of our generation. As a business community, the Manitoba option is the one best suited to minimize emissions. Definitely, pricing does influence consumption behaviour.”

Green Party of Manitoba leader James Beddome accused Premier Brian Pallister of following the former NDP government’s plan of inaction: “Pallister wants to avoid the province’s responsibility to reduce emissions by claiming Manitoba’s large investments in hydroelectricity should exempt it from the same standards applied to other provinces. Pallister is saying that with a carbon tax, Manitoba’s trade would suffer more than other provinces’, and that Manitobans cannot afford it. This is nonsense. For the average Manitoban, the $50/tonne works out to less than the price of a cup of coffee every few days.”

University of Manitoba environmental sociology Prof. Mark Hudson: “I don’t see any climate leadership here. Apart from the carbon levy, this is less of a ‘plan’ and more of a set of suggestions the government might consider at some undefined point in the future. The plan bangs again and again on the theme that we should recognize how ‘green’ we already are. The premier believes that we should rest on our laurels, having invested in hydroelectricity. The question is really whether Manitobans are willing to do their share to pull humanity away from dangerous climate change. With this plan, the government is saying that we are not.”

Canadian Taxpayers Federation — Prairie director Todd MacKay urged Pallister to defy Ottawa and reject a carbon tax altogether: “A majority of Manitobans oppose a carbon tax and their provincial government should be standing with them instead of pre-emptively acquiescing to Prime Minister Justin Trudeau. Premier Pallister promised a referendum on ‘any proposed major tax increases’ and a carbon tax is certainly a major tax. Does premier Pallister really think prime minister Trudeau wouldn’t even consider the will of the people if a clear majority of Manitobans voted against a carbon tax in a referendum?”

Wilderness Committee spokesman Eric Reder said the “fluffy’ plan allows someone to pollute Lake Winnipeg by paying another business for its carbon credits. “They have few conservation actions planned, and they will give tax breaks for big carbon-emitters while the rest of Canadians are left to pay the tax to combat the quickly growing climate crisis. The document delves into many possible actions on conservation and water protection, yet the government commits to none of them and offers no timelines at all. This is a fluffy document, with fancy graphics and blank pages. It seems the government is saying it could do these things, but won’t commit to anything, and will just go back into hiding on the environment file. This is no way to lead.”

Peter Miller, on behalf of the Manitoba Carbon Pricing Coalition: “The carbon-accounting method proposed and annual reporting with the provincial budget show innovation and accountability. (But) a problematic aspect is the absence of goal-oriented governance structures to drive results to meet national and international targets. There is strength in starting at $25/tonne so that people sit up and take notice and funds are immediately available for green investments. But this should not replace the prospect of a rising carbon price later.”

Plan, at a glance: