Where's the passion? The urgency? The desperation?

Where’s the passion? The urgency? The desperation?

Fair questions to ask after the Winnipeg Jets rolled out the welcome mat once again Sunday, playing the all-too-familiar role of gracious hosts as they dropped a sixth straight game at Bell MTS Place to remain outside the playoff picture.

This time, it was the Nashville Predators who came to town, enjoyed their brief stay and left with a pair of points in the form of a 1-0 victory. You can add them to the ever-increasing list of recent satisfied NHL visitors to Friendly Manitoba that includes Carolina, Chicago, Montreal, St. Louis and Toronto since mid-December.

“We’ve gotta right the ship and figure out what to do but we’ve had success here for a long time. I don’t think it’s a long-term issue, but definitely something we gotta worry about for next game,” said Jets forward Andrew Copp.

Winnipeg falls to 24-18-4, which keeps them in ninth place in the Western Conference, due largely to their puzzling home-ice disadvantage which is offsetting one of the NHL’s best road records. Tenth-place Nashville creeps even closer by improving to 21-16-7.

“That’s not good enough. We gotta be better at home, no question about that,” captain Blake Wheeler said of the home woes, which now includes a 9-10-2 record at the downtown barn. It’s even an uglier recent drought if you include six straight home losses — three in the regular-season, three in the playoffs — which closed out last season.

Coach Paul Maurice seemed to suggest it’s more of a personnel issue than performance anxiety for his troops, who have now been shutout twice this season, both on home ice (Nov. 12 vs Colorado being the other).

“I don’t think we play a whole lot different home and road – and that would be the factor. We were able to dominate in the past here, where we would have had a heavy line match-up unevenness for teams coming in that we don’t have now. So it’s going to be a flat line. We’re going to have to battle every night. You’re not getting that match-up dominance that maybe you used to have, in terms of shutdown pairs of D necessarily or how we move the puck,” said Maurice.

This was the start of a three-game homestand for Winnipeg, following a 2-1-1 road trip in which they were largely outplayed in long stretches but still salvaged five of eight points.

But in a game where they could have put a seven point buffer between themselves and a division rival with a clean victory — not to mention jumped back into a wildcard playoff spot — the Jets got off to an incredibly sloppy start, with 11 giveaways in the opening frame compared to just two for the Predators.

“Zero out of 10,” is how Copp described the way his team started the game.

One of the turnovers proved especially costly. The normally defensively responsible Adam Lowry tried a no-look backhand pass in his own zone to defenceman Dmitry Kulikov, which was promptly picked off by Predators forward Yakov Trenin. He quickly found Kyle Turris, who beat Connor Hellebuyck at 11:53 for the only goal of the day.

“We will look at our first period as the uneven period for us. You’re always concerned your first game back, first period back after a road trip, probably more so in the hockey that’s played on that trip, the style of game. It looked nothing like the game (Sunday) except the first period. We turned it over an awful lot, the other team didn’t so we found ourselves chasing the game for the first 20 minutes,” said Maurice.

Predators backup goalie Juuse Saros ensured they could never catch up, stopping all 28 shots he faced for his first shutout of the year. Not bad for a guy who began the day with a bloated 3.25 goals-against-average and .892 save-percentage. He got a lot of help from both the players in front of him, and Winnipeg’s lack of accuracy.

The Jets had 18 shots blocked, and fired another 18 wide.

The Jets’ best chances came during special teams play. Copp had a shorthanded breakaway in the first period, while Mark Scheifele whiffed on a rebound off a Patrik Laine power play one-timer in the third period. The Jets also rang iron twice, with Mason Appleton and Nikolaj Ehlers catching the crossbar.

“I think the first period coming off a road trip, it’s always a little sluggish. Second period was better, and the third was just, you know, we didn’t get the looks we were looking for. It was more or less a stalemate. They got one opportunity, they buried it,” said Wheeler.

“That was kind of the message after the first. You can use that as an excuse (first game back off a road trip), but if it carries over into the second then it’s a problem. So I think we got on the body there a bit in the second, tilted the game in our favour, but we just couldn’t get that goal.”

Hellebuyck suffered the hard-luck defeat, making 31 saves for the Jets.

Winnipeg was forced to scramble on the blue-line after top-pairing defenceman Tucker Poolman suffered an apparent leg injury in the first period and never returned. Maurice had to mix-and-match his remaining five defenders, who all played heavy minutes. There was no post-game update on Poolman’s status.

“Hopefully, he’s doing alright and hopefully can be back soon. Especially early in the game. I think he’s been playing awesome for us and tough to see him go down. Obviously having five D the rest of the game, a little bit of an adjustment, but I don’t think the five D hurt us I guess. I thought we were able to manage that pretty fine,” said Morrissey, who played a team-high 25:15.

The Jets will get two more chances to get back on track at home this week. Next up are the Vancouver Canucks on Tuesday, followed by a Friday night meeting with the red-hot Tampa Bay Lightning.

“Obviously, we lose the first one here. We have two more to go and we’re going to have to try to get a good feeling in our locker room and get a couple wins on home ice. We want to make this a tough place to play and it starts against Vancouver,” said Morrissey.

Jets want to raise a ruckus 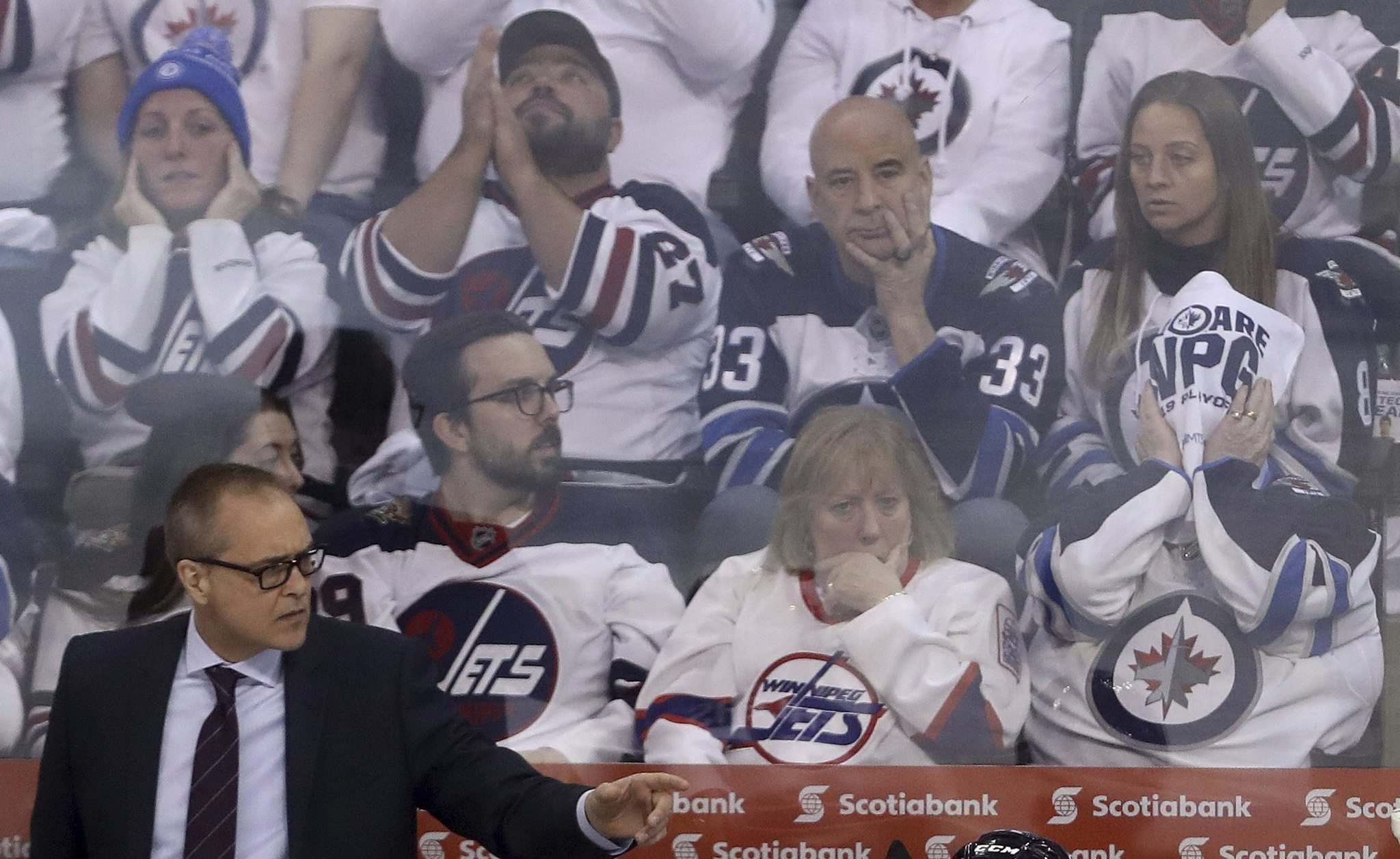