A day after her statue was toppled, it fell to a kayaker to collect the severed bronze head of Queen Victoria from the shallow waters of the Assiniboine River.

A day after her statue was toppled, it fell to a kayaker to collect the severed bronze head of Queen Victoria from the shallow waters of the Assiniboine River.

It was a final indignity to the century-old landmark on the grounds of the Manitoba Legislative Building in the wake of a Canada Day protest that sent shockwaves across the country and overseas.

Moments before a rope was used Thursday to pull the statue off its pedestal, Queen Victoria sat in repose on her throne, staring over hundreds of orange flags stuck in the lawn that signified the growing number of unmarked graves of children who attended residential schools.

Later, a more recent statue of Queen Elizabeth on the grounds of the Winnipeg home of Lt.-Gov. Janice Filmon was also toppled. It was a series of emotional fireworks on a day Canadians were encouraged not to celebrate, but to reflect on the legacy of residential schools.

A police investigation is now underway. Manitoba’s premier condemned what he called vandalism, adding those responsible will be pursued actively.

While the incident made international headlines and even triggered a response from the British prime minister, Manitoba’s Indigenous leaders stopped short of condemning those whose actions were captured in videos posted on social media.

“MKO (representing northern First Nations) does not condone violence. I have reached out to Winnipeg chief of police Danny Smyth to let him know we do not condone violence. We want to continue to work on relationships with our partners and we hope for continued dialogue around the ongoing legacy of residential schools… Destruction of material things are nothing compared to the deliberate destruction of life and culture,” said Pimicikamak Cree Nation Chief David Monias.

“Material things are replaceable, but lives aren’t,” he said.

Assembly of Manitoba Chiefs Grand Chief Arlen Dumas told the Free Press he was “shocked and disappointed” to hear of the incident at the legislature, noting he was at the “No Pride in Genocide” event and did not witness the statues coming down.

At the Manitoba legislature, the group pointed out, there was no statue commemorating First Nations in the province. Virtually everyone else, including the Métis nation (honoured in 1973 with a statue of Louis Riel), is recognized.

In the seat of Manitoba’s government and at the heart of Treaty 1, it is as if First Nations don’t exist.

Frankly, there is no Manitoba, no treaties and no legislature without First Nations, so the committee got to work, convincing provincial decision-makers to let one be built in 2020.

Ideally, there would have been more cultural advisers and Indigenous leaders on site to provide support to those in pain, Dumas said, adding he’d be willing to collaborate on a replacement statue that would be more “reflective of what Manitoba is today.”

“Maybe if we took away these colonial monikers, or at least added more culturally appropriate ones, we’d be able to move forward in a better way,” he said.

Aside from the attacks on the two statues, Thursday’s protest was largely non-violent and there were no reported injuries. One arrest was made not directly linked to the protest: a 51-year-old man was charged with mischief after vandalizing a private vehicle.

“There was no violence going on towards other people, it was largely property — in this case statues — that were being damaged,” Smyth said at a news conference Friday.

Previous reports that police used a stun gun on one man after the statue was pulled down were false, Winnipeg Police Service Const. Rob Carver told the Free Press.

“No one was tased regarding the toppling of the statues. Absolutely not.”

While Smyth was critical of what he called “a volatile situation that was started by a small number of individuals,” the police chief said officers chose not to intervene to avoid inciting protesters.

“The risk to any of us gathering is that there might be some within the crowd who have different agenda, and that is what we witnessed at the end of the afternoon,” he said.

However, Smyth said some officers were spit on, and police cars were struck with rocks.

Police will be investigating, but Smyth said he couldn’t estimate what type of charges may result.

“The actions by individuals to vandalize public property at the Manitoba Legislative Building July 1 are unacceptable. They are a major setback for those who are working toward real reconciliation and do nothing to advance this important goal,” Pallister said.

“Those who commit acts of violence will be pursued actively in the courts. All leaders in Manitoba must strongly condemn acts of violence and vandalism, and at the same time, we must come together to meaningfully advance reconciliation.”

NDP Leader Wab Kinew also issued a statement Friday, calling out “the actions of some.”

“For the most part, yesterday was a day of unity, commemoration and healing for all Manitobans,” Kinew said. “However, the actions of some at the legislature were wrong. These acts of destruction do not further reconciliation and we unequivocally condemn violence.

“We support those who continue to work peacefully towards reconciliation.”

The incident made headlines around the world, including international outlets such as Al Jazeera and the Guardian.

British newspaper the Independent reported Prime Minister Boris Johnson criticized the toppling of the statue in Winnipeg. A spokesman was quoted as saying Johnson “condemned any defacing of statues of the Queen.” 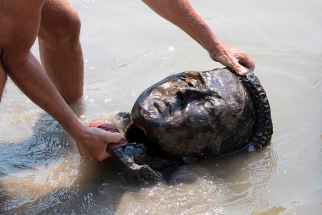 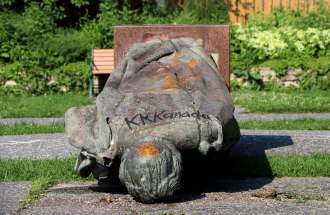 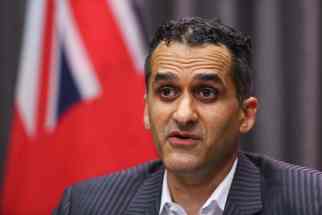 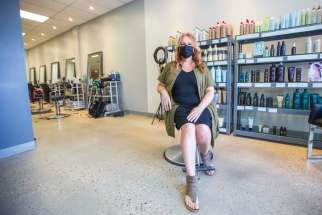 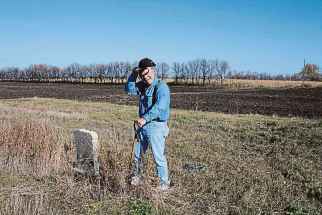 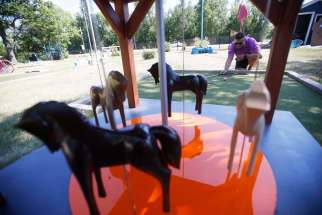 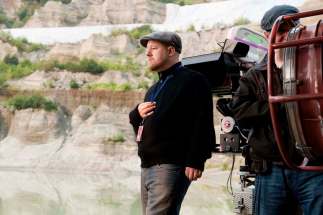 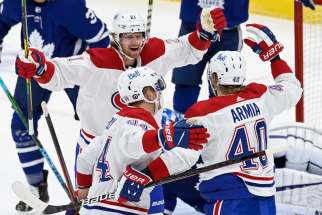 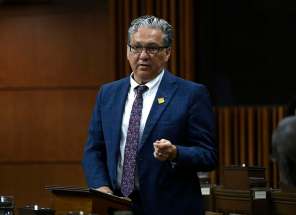