Manitoba Premier Brian Pallister’s government is on the brink of a revolt because of his rigid ideology and strict governing style in which he is always in charge.

Manitoba Premier Brian Pallister’s government is on the brink of a revolt because of his rigid ideology and strict governing style in which he is always in charge.

“There’s almost an open revolt among some factions within his party,” said Raymond Hébert, a political science professor emeritus at the Université de Saint-Boniface.

He said the PCs could face a rapid implosion akin to what happened to the federal Green party, or even a drawn-out revolt similar to the one that ended the Manitoba NDP’s 17-year reign.

“When people start contesting your leadership publicly, it can accelerate,” he said.

This week, Eileen Clarke stepped down as Indigenous affairs minister and was replaced by Alan Lagimodiere, who claimed residential schools were created to help Indigenous people. He apologized Friday.

Clarke said she will launch a so-called listening tour across the province. Meantime, backbench MLA Shannon Martin said Clarke had reason to quit cabinet, and Families Minister Rochelle Squires said Friday she’s alarmed by comments issued by her own government.

“There are visible cracks that we can discern right now,” said University of Manitoba political scientist Christopher Adams

“It’s not just theatre; I think a lot of this is hitting home.”

On Friday, Squires told the media that she was disturbed by unspecified comments about Indigenous people.

“I am deeply troubled by recent events and comments. I am taking time to reflect, to listen to the dialogue, and come to better understand my own responsibilities towards reconciliation,” Squires said in a statement.

“I want nothing more than for my grandson and all (other) Indigenous people to live in a country brave enough to accept the awful truth of what happened, and to commit to doing better.”

Given the timing, she was referring to Lagimodiere’s remarks that people who created residential schools believed “they were doing the right thing.”

A week ago, Pallister said people who came to settle Canada did not intend to destroy anything. The comment was widely understood to refer to colonists, though he clarified Thursday that this includes Indigenous people, too.

“These are really major cracks in the facade of cabinet unity,” Hébert said.

“The resignation of Clarke might be a spark that might ignite something, and Squires’ comments in that context are very damning for the premier,” said Hébert.

“We can be sure there is pressure at the grassroots level.”

To that point, McPhillips MLA Shannon Martin has twice tweeted comments that are critical of his own PC cabinet, saying it was “understandable” Clarke resigned and that residential schools were “designed not to benefit Indigenous peoples, but to erase their cultures.”

“We agree to disagree. We’re respectful of the viewpoints of each and every individual around the cabinet table, (which) we all express freely,” she told reporters, adding her party needs to learn from people hurt by recent comments.

“We’re not perfect; we don’t have all the answers. But we need to listen.”

“We’re not perfect; we don’t have all the answers. But we need to listen.”
– Mental Health Minister Audrey Gordon

The PCs have taken a beating in the polls for their response to the pandemic. Even before COVID-19, the party’s cuts to health care were unpopular. Those cuts hit home when Manitoba became the only province to airlift intensive-care patients to other provinces.

The premier’s popularity is extremely low, rivalling that of former premier Greg Selinger, whose key cabinet ministers staged a revolt in 2014 over his refusal to listen to their advice, Adams noted.

Selinger held onto power, only to see his party turfed from government in 2016.

Hébert said the Pallister is at risk of a similar fate.

He previously said he “misspoke,” which did little to blunt criticism.

He previously said he “misspoke,” which did little to blunt criticism.

“I would like to offer my sincerest apologies to all Indigenous and non-Indigenous Manitobans, and Canadians whom I have offended greatly with my remarks yesterday,” reads a statement issued late Friday afternoon, 30 hours after his news conference.

The statement said his words “were wrong, and I genuinely and sincerely ask for your forgiveness.”

Lagimodiere had boasted Thursday that the Pallister government had gone “above and beyond” what the Truth and Reconciliation Commission demanded.

First Nations and Métis leaders demanded apologies or refused to speak with him.

On Friday, Lagimodiere wrote that he takes seriously his job to listen, understand the truth and improve the lives of Indigenous people.

“I want to acknowledge our country’s hard truths, especially in light of the tragedies of residential schools that continue to be deeply felt here in Manitoba,” he wrote.

“I hope we can work together in the spirit of friendship and co-operation.”

The PCs have made a series of decisions that have angered many groups, including its plan to phase out most school divisions.

Manitoba Hydro’s board resigned en masse in 2018, while the government is setting electricity rates outside the Public Utilities Board, which has been denied the data it needs to regulate prices.

Manitoba’s health minister has been largely absent during COVID-19, which Hébert chalks up to the premier calling the shots.

“He’s not interested in being a good premier; he’s interested in imposing his will on what he sees as what Manitoba needs, which happens to come from his own, very strong conservative ideology.”

Both Adams and Hébert said Clarke could cause major damage to Pallister if her listening tour involves public forums that give disgruntled voters a chance to vent.

“He’s not interested in being a good premier; he’s interested in imposing his will on what he sees as what Manitoba needs, which happens to come from his own, very strong conservative ideology.”
– Raymond Hébert, a political science professor emeritus at the Université de Saint-Boniface

Having the PC base gather together and share the same frustrations could galvanize the push to unseat Pallister.

“I suspect we’re only seeing the tip of the iceberg in terms of rural revolt against the education reform,” said Hébert.

“The walls are closing in on him quite frankly, if you look at the whole picture.”

Adams said the premier could tell his caucus that he plans to retire at a specific date, at which point his MLAs could rally behind him to keep the party strong until it holds a leadership convention.

“People would close ranks around his leadership, until there’s a convention,” said Adams.

“This is the time to lay down your cards and let people know what your plans are — otherwise it might turn into a revolt.”

Hébert said the premier could shift from a right-wing ideology of privatization to a more centrist viewpoint on the provincial budget.

“Manitoba is not an ideological province; Manitobans like good government, regardless of where it comes from,” saying it’s a formula Duff Roblin, Ed Schreyer and Gary Doer have all used, despite having had different political views.

Otherwise, the premier might be banking on the loosening of COVID-19 restrictions

“Unless he pulls a rabbit out of a hat, with something entirely unforeseen, that will make people forget about all these issues,” Hébert said. “Just letting people go back to bars and restaurants, I don’t think is enough.” 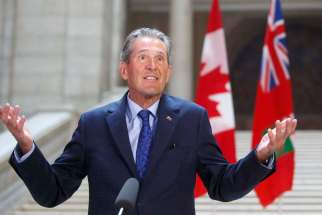 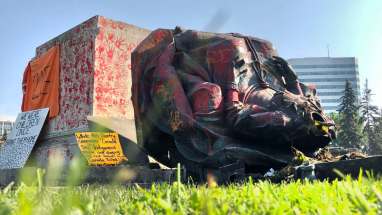 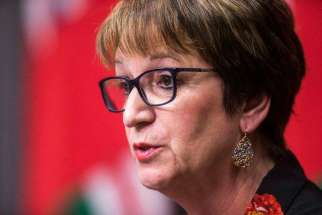 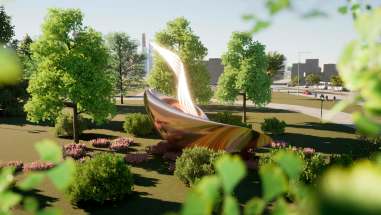 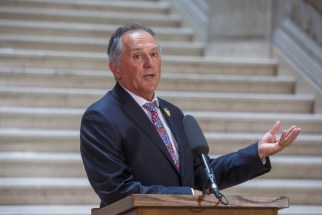 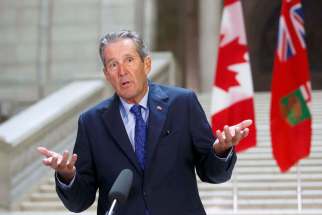 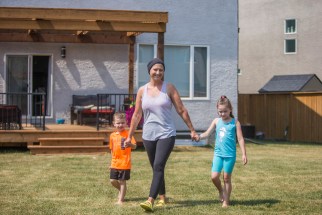 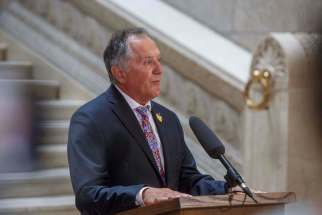