Twenty years ago on Sept. 11, Bruce and Kathryn Fleming were walking through Logan International Airport in Boston at the same time as 10 terrorists who were hell-bent on destruction and death.

Twenty years ago on Sept. 11, Bruce and Kathryn Fleming were walking through Logan International Airport in Boston at the same time as 10 terrorists who were hell-bent on destruction and death.

The couple had just visited his parents and were on their way home to West Vancouver via a direct Air Canada flight to Vancouver.

Instead, their pilot was forced to land in Winnipeg after two planes hit the twin towers of the World Trade Centre in New York City and North American airspace was shut down to non-military planes.

“Parts of that day could have been yesterday,” said Fleming, who now lives in San Antonio. “I can still see the fall in Winnipeg, the leaves falling off the trees. I can picture walking down to the river and the collection of stores at The Forks.

“And especially how great everybody was to us.”

More than 1,500 passengers from 15 planes — the fifth-highest number of planes diverted to a Canadian airport — spent four days in the city as the continent grappled with fallout from the terror attacks. Four planes had been hijacked by terrorists; two were flown into the twin towers, one hit the Pentagon, and the fourth crashed into a field in Pennsylvania after passengers fought back against the hijackers.

The two planes, which crashed into the twin towers, took off from Boston around the same time as Fleming’s plane. The other two took off from Newark, N.J. and an airport near Washington, D.C.

“It is just so sobering,” said Fleming. “I have thought about (how close I was to the terrorists) a lot. Speculative, of course, but the interviewers asked as many ways as they could whether we noticed anything unusual.

“It’s just strange to think we all left at the same time, around 8 a.m., within a few minutes of each other.”

“It’s just strange to think we all left at the same time, around 8 a.m., within a few minutes of each other.” – Bruce Fleming

Fleming is pictured standing at the top of a stairway to an Air Canada jet in a photo that appeared on the front of the local section of the Sept. 12 Winnipeg Free Press.

“Earlier, the pilot had suddenly pulled the throttles back, said “the company has asked us to land the airplane,” and, from the right-hand window I looked down from 37,000 feet on the airport in Winnipeg,” he said.

“Air Canada crew didn’t tell the passengers what was going on, but the lead stewardess was standing in the aisle with tears pouring down her cheeks.” 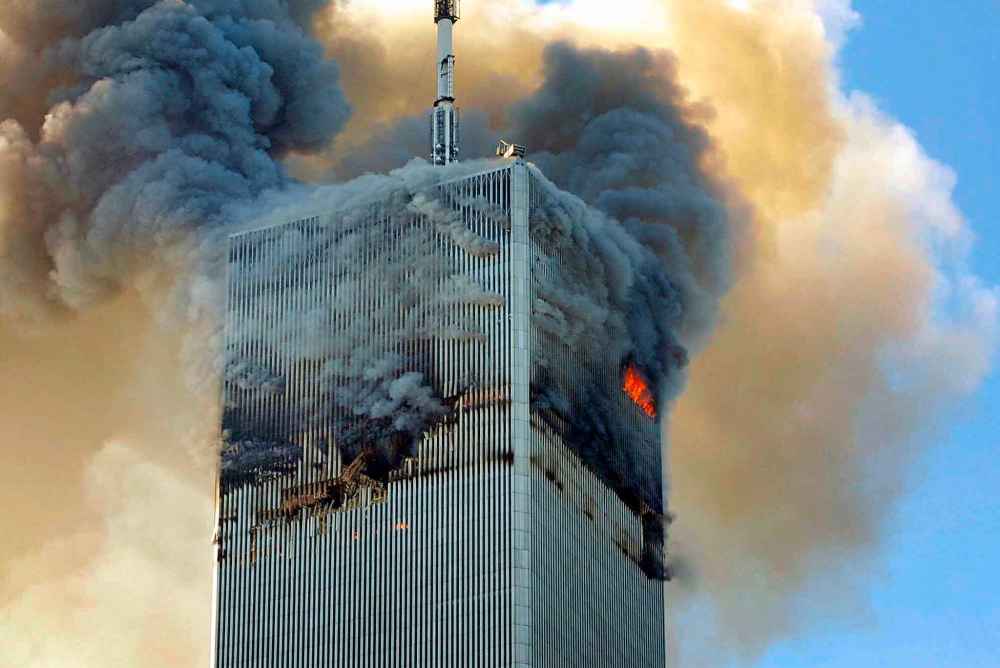 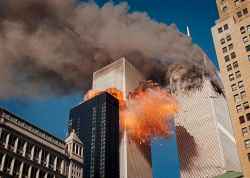 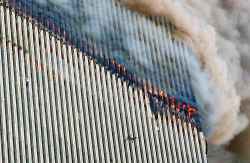 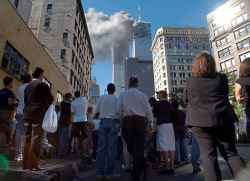 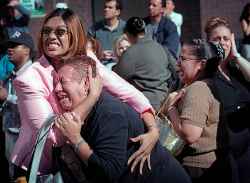 Fleming said once on the ground, passengers had to wait inside their planes — some for as long as 12 hours — while other passengers were questioned by RCMP and plainclothes federal agents.

“One (questioner) was in front of you and another, who didn’t say anything, was at a 90-degree angle from you,” he said. “They were interested in why we have U.S. passports and why my wife was in care because of a transplant.”

Fleming said they were put on a bus with other passengers and taken to a hotel. He and his wife spent the next few days wandering throughout the city, visiting The Forks, the Assiniboine Park Zoo, the Via Rail train station, and many restaurants.

In between, Fleming said the provincial Emergency Measures organization somehow managed to get his wife the medication she was running out of because they hadn’t arrived home as scheduled.

“The inter-agency co-ordination behind that was amazing in its speed and organization, given an event nobody could have planned for,” he said.

Norma Mitchell and her six-year-old daughter of California also spent four days in Winnipeg after their flight was grounded here.

“I was on the one and only United Airlines flight which landed in Winnipeg that day,” said Mitchell, whose flight was from London, England, to Los Angeles.

“There were 170 of us on the flight and one of the captains came on and said President (George) Bush said we can’t continue to the United States and we are landing in Winnipeg, Canada. Then the captain came on again and said the twin towers had been hit. I knew it wasn’t good. Within the next half hour, we knew what was going on.”

Mitchell said once on the ground they couldn’t leave the plane.

“We had to stay on the plane for hours and hours. They even brought lunch in,” she said.

Mitchell said she can only remember sitting in the hotel room watching TV, trying to explain what was happening to her young daughter, and walking around the city.

“I just told her she was safe. I don’t think she really comprehended what happened,” said Mitchell.

She said she doesn’t know which hotel she stayed at because she never got a bill. “We didn’t have to pay. Your government paid for it.

“People were so kind. I’ll never forget it.”

“But it was six months before I wanted to go on a plane again. It was scary.”

Two decades ago, Glen Murray was mayor of Winnipeg. He had just started his day when one of his office staff told him to turn on the television.

“I turned it on and within 15 to 20 minutes, they shut down the airports for outgoing flights,” said Murray.

“We also knew planes would be coming here, but we didn’t realize how many planes would arrive in an incredibly short time.”

While Halifax and Gander, NL., hosted travellers flying across the Atlantic Ocean, federal aviation authorities assigned cities such as Winnipeg and Calgary to take in planes flying over the polar route.

Murray said Winnipeg Transit was just one agency that quickly responded to the task.

“Rick Borland… and his transit people reorganized all the bus routes in an hour and had buses go to the airport with a complete service bay there for passengers,” he said.

“It was amazing how people just came together,” he said.

“There’s something very much in… the DNA of our community. We don’t even have to ask people to pitch in. I hope we never lose that.”

“The walls were so thick, it blocked cellular communications,” he said. “It was built during the wired period, but now we had cellphones. They were almost useless. So afterwards, we reorganized and upgraded our system.”

Murray remembers that one plane, which arrived from the Philippines, had sick children on board.

“The Health Sciences Centre mobilized to help them,” he said.

“When I look back… this was one of the few opportunities where, in the middle of a disturbing tragedy, what came out was a human response. We know that when people do something terrible, others within minutes and hours can engage a hopeful and loving response to it.

“There was goodness in a dark moment.”

”We know that when people do something terrible, others within minutes and hours can engage a hopeful and loving response to it… There was goodness in a dark moment.”–Glen Murray

Twenty years ago, Shelley Napier was a regional manager with the Emergency Measures Organization. Today, she runs a consulting company that specializes in helping communities plan for emergencies.

“In emergency management, it’s all about care and control of people,” said Napier.

“This was a day that we all remember. We all remember where we were. When you looked at the news that morning you didn’t know how it would impact people here, but it did.”

Napier said by the time she got to work that morning, EMO staff knew planes were headed to Winnipeg and would soon land.

“We quickly became mobilized. We knew the city would have to take care of the people. We didn’t know how long they’ll be here. It took a huge amount of co-ordination to look after that many people.”

Napier said early on they made the decision to put up passengers in hotels instead of billeting them in homes.

“I know Gander gets all the publicity, they were smaller and had more planes — but it was Winnipeg which helped us.”–Bruce Fleming

“It was cost shared 50-50 between the province and the city,” she said. “That was a very generous act.

“We took care of their basic needs. The city and the province and everyone just pulled together to take care of people. We are always proud of how we pitch in as Manitobans, but we really stepped in to make the passengers realize people cared.

“It gladdens my heart to hear people contacted you to say how wonderful people in Winnipeg were for them.”

Fleming and Mitchell, who have never met, decided separately that after 20 years, it was time to reach out to Winnipeggers to thank them for what they did for them during those stressful few days here.

“It has been on my mind to thank all of the people who helped,” said Fleming. “I knew if I didn’t do it now, I wouldn’t. So, this is the time.

“I know Gander gets all the publicity, they were smaller and had more planes — but it was Winnipeg which helped us.”

As Mitchell said, “I very generously was taken in by your country, so I really wanted to thank your country and I want to thank the people.”

In its response to 9/11, America gave up on much that made it great

Ground zero: A selfie stop for some, a cemetery for others

Debate on most progressive won by non-participant

Fernandez a bright light in a sometimes dark world