The City of Winnipeg will explore a potential court injunction against the anti-mandate protest that has delayed traffic and created excessive noise in downtown Winnipeg.

The City of Winnipeg will explore a potential court injunction against the anti-mandate protest that has delayed traffic and created excessive noise in downtown Winnipeg.

On Thursday, council directed the city’s chief administrative officer to explore court proceedings that could restore “common order” in the Broadway and Memorial Boulevard area, where protesters of the so-called “freedom convoy” have been demonstrating since Feb 4.

“An injunction is… the most effective action to achieve order. It gives the power to the police to intensify their approach to what’s happening downtown,” said Coun. Kevin Klein, who raised the call for the city to investigate its legal options.

The successful motion stressed the key aim would be to tackle the “excessive noise and vehicle disruptions.”

Klein believes the protest in front of the Manitoba legislature has led to increased police overtime and local business losses. Officials noted the city also provided extra snow plowing around the protest site to reduce the risk to vehicles and pedestrians.

The Charleswood-Tuxedo-Westwood councillor said that shows the City of Winnipeg, and not just its residents, have been negatively affected by the demonstration.

Thursday’s special council meeting was convened specifically to respond to the protest. Several council members noted downtown residents have complained vehicles honking and other loud noises are disrupting their sleep, while traffic is impeded by barricades and closed lanes.

CAO Michael Jack told council police are leading the response to any bylaw infractions, due to safety concerns about involving civic parking and bylaw enforcement officers.

“In a protest site where there could be up to 1,000 people, it wouldn’t be advisable to be sending our officers in there in a way that might antagonize or inflame,” said Jack.

Meanwhile, council also supported Coun. Sherri Rollins’ motion to ask the public service to recommend “significant fine increases” for “noise nuisance” offences that last for more than 24 hours, as well as any offences that obstruct or impede emergency vehicles.

The motion also calls for the CAO to ask the Manitoba government to consider hiking its fines for similar traffic offences. Council approval would still be required to implement specific changes.

Rollins also moved a successful motion to ask the Winnipeg Police Board to review police protest policies, including on public communication.

Mayor Brian Bowman said he’s not immediately sure how long it will take to determine which legal options are available to the city or what fine hikes it could consider.

“I don’t think there’s an expectation that an injunction will be resulting in the coming days. I think that would be an unrealistic expectation,” said Bowman.

In an email, city communications director Felicia Wiltshire said there is no set timeline for a public service response to Thursday’s council decisions, though the potential court matter “will receive the highest priority.”

The mayor repeatedly urged protesters to end their “occupation” of local streets as soon as possible.

“Hopefully, by the time (the CAO) comes back with (the requested) advice, it will be moot and it won’t be necessary,” said Bowman.

The protest aims to oppose COVID-19 vaccine mandates for cross-border truckers, among other demands to end public health restrictions, with similar demonstrations taking place in other Canadian communities.

Locally, the demonstrators appear to be settling in, with plenty of firewood, food, portable toilets, and equipment gathered at the site.

An earlier motion the mayor had raised would have had council ask the province and police to make every effort to ensure compliance with traffic and noise bylaws. It was replaced, however, after some councillors criticized it for lacking more tangible action.

In a written statement, the “Winnipeg freedom convoy” protesters thanked council for acknowledging the general right to protest, noting they feel compelled to address “the harm caused by the COVID-19 mandates in our province.”

The group also promised to move vehicles away from an area crosswalk and ask all participants to limit honking to two minutes per hour between 9 a.m. and 9 p.m.

“We have taken a proactive approach to ensure the rally is both peaceful and respectful, and we have been working to comply with all requests made by the Winnipeg Police,” the statement said.

“As a provincial government, we do not have jurisdiction, nor would it be appropriate, to interfere with civic protests or police operations. However, we remain in regular communication with the mayor and City of Winnipeg officials… We have full confidence in the front-line officers of the Winnipeg Police Service to maintain order on Winnipeg streets,” Stefanson said in an emailed statement.

In a joint evening release, Stefanson and Bowman said they met virtually Thursday to discuss the ongoing protest in the legislature area.

The premier and mayor “agreed to keep the lines of communication open, as well as keeping all options open going forward,” the statement said. 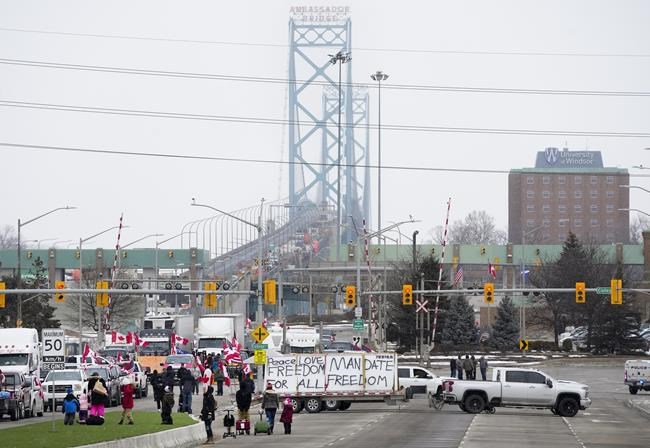