In a row: a couple of “for lease” posters and a boarded-up window.

In a row: a couple of “for lease” posters and a boarded-up window.

The Haberdashery’s sign glowed Open despite the lack of glass last week. It’s not closing, though a few neighbours have — the soap store next door, Shop Take Care down the road. FFO Clothing left the Exchange District for all-online sales.

Boutique Anya is likely on its way out, according to owner Alicja Dalecki (though she’s been considering for years).

“We’re feeling a little violated,” Nolan said. “This is our home away from home… it’s like someone breaking into your house.”

He’s sold hats on Albert Street in the Exchange District for 14 years. Once, years ago, someone unsuccessfully tried to break in, Nolan said. That was it, until this month when a couple of illegal acts left him short nearly $1,000 worth of product and with a damaged storefront.

“People, I think, are just hanging on by their nails,” Nolan said, citing many businesses’ decreased revenue over the past two years. “We do need more people in the Exchange.”

Dalecki is watching her peers leave. The lack of foot traffic could be her final straw after pandemic-tinged years of declining revenue and shoppers switching to online purchases.

“There’s just no way to sustain this,” the shop owner, who has a full-time job elsewhere, said.

Crime is seemingly up, the unhoused population appears to have grown, and foot traffic is not where it was before COVID-19 hit, according to Exchange District entrepreneurs and residents.

Still, nearly everyone the Free Press spoke to expressed optimism about the neighbourhood’s future — they just need more people around.

“There is a better energy in the area,” said Nick Van Seggelen, owner of Bodegoes.

The number of lunch and dinner calls isn’t what they were pre-pandemic — maybe 70 per cent — but things became noticeably busier this summer with Exchange District events, Van Seggelen said.

“We’ll have one day where it feels like it’s a really good day, and the next two are back to just getting by,” he said. “It’s tough to plan for and tough to staff for.”

Earlier this month, Bodegoes matched the Haberdashery — Bodegoes had boards replacing glass too, though on its door. Some electronics were smashed during the break-in, Van Seggelen said.

“If more people (are) downtown, (it’s) less likely crimes are going to happen,” he said. “You shine light in the shadows and the shadows disappear.”

It’s happening in neighbourhoods throughout the city, noted David Pensato, executive director of the Exchange District BIZ. Stores on McPhillips Street have banded together to address local crime, the Free Press reported in September.

Exchange District BIZ patrols are around most days until midnight, Pensato said.

“Those smashes seem to be happening in the very wee hours of the morning. The more people that are around in the evenings and overnight, the less likely that is to happen,” he said.

Eleven commercial break-and-enter calls for service were made in the Exchange District over the past 10 weeks, according to online police data.

There were 406 non-violent crime incidents in the Exchange District last May, up 31 per cent from the year prior, but down compared to May 2019’s 582 incidents.

There were 406 non-violent crime incidents in the Exchange District last May — up 31 per cent from the year prior, but down compared to May 2019’s 582 incidents.–Winnipeg Police Service

Less non-violent crime last year is likely due to reduced foot traffic, according to Ally Siatecki, a media-relations assistant with the Winnipeg Police Service.

“I’ve never been worried about my safety,” said Charlotte Enns, who has lived in the Exchange District for seven years.

The number of people now living on the street is notable, she added.

“I don’t think we’re doing a very good job of looking after them,” she said.

Daily visitor foot traffic is increasing, Pensato said. He didn’t have specific numbers. However, the Downtown Winnipeg BIZ tracked an average of 118,230 daily visits downtown during the week ending Sept. 4, up from the 112,015 during the same week last year, but down from 140,899 in 2019.

Sixty-four per cent of workers are in the office at least part-time, up from 47 per cent in March, according to a Probe survey the Downtown Winnipeg BIZ commissioned.

Still, he’d like to see more office-goers, and more frequently, he said.

Some, such as Phoebe Pacla-On, have drawn crowds via their online presence. She and the Cake-ology team have fans: customers want photos with them.

“It’s been really nice for people to come in and talk about, ‘Oh, we saw you on Instagram,’” Pacla-On said.

TikTok has created customers for Tara Davis Studio Boutique, even though Tara Davis has never made a video for the app herself.

“Young people will come in and do a TikTok, and then someone comes in and is like, ‘We saw you on TikTok,’” Davis said. “We’re positioned for (sales) to be the best in 11 years.”

She transformed her McDermot Avenue store’s art corner to a candy shop for her new patrons, loading up on international sweets.

“These people who are coming from the suburbs again, who have seen TikToks and Instagram and stuff are excited about the neighbourhood,” Davis said. “It truly is an exceptional neighbourhood.”

She believes stores will continue closing downtown, in part because of debt, but as developments such as Market Lands, a mixed-use site, open, the Exchange District will thrive.

Greg Tonn, owner of record store Into the Music, also said his Exchange District shop was going through a growth period, largely from a boom in record enthusiasts.

“I think it’s really about not leaving (visitation) up to chance and making specific investments,” she said.

An Exchange District development plan, which Winnipeg’s city council adopted in February, outlines building a minimum of 110 residential units in the area by 2030. Increasing neighbourhood amenities, upgrading active transport routes and launching events are among the actions the plan lays out to draw Manitobans.

Nuit Blanche attracted tens of thousands of people downtown this year, Pensato said at a State of Downtown event this week.

The Downtown Winnipeg BIZ Recovery Framework, released in 2021, further identifies ways to revamp the city’s core, including supporting people on the streets via 24-hour safe spaces, among other things.

Elena Dobrowma, a 27-year-old walking through the Exchange on a September afternoon, said she generally considers downtown “sketchy.”

Still, she said she liked the Exchange and would come back.

He said many Exchange District businesses are eligible for tax credits, and he expects economic activity to increase throughout the province. 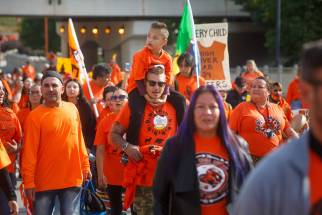 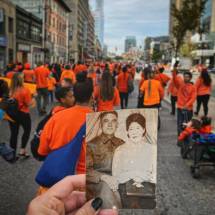 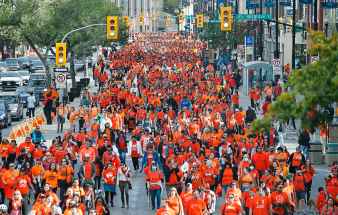 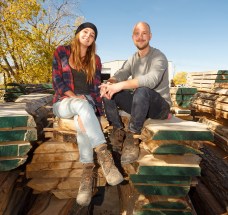 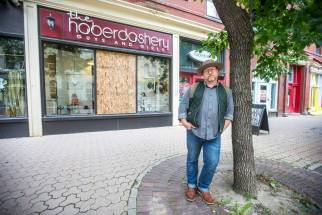 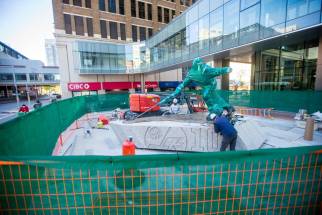 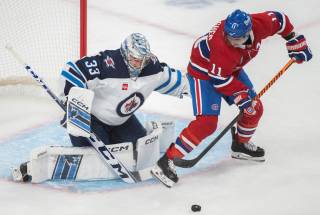 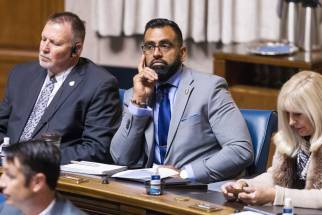 If a tree falls in the urban forest… Just Ducky