Tourism, the arts would get more aid from Liberals, Trudeau promises

It is the second day in a row his tour bus visited a business that received federal help during the pandemic, as his campaign is taking pains to highlight the ways wage subsidies and rent assistance helped keep the economy afloat during the COVID-19 pandemic.

“Look, COVID-19 wasn’t something we as a government expected either,” Trudeau said, speaking to employees of ETI Converting Equipment in Longueuil. “But just like you, we knew that staying true to our values was the only path forward. From Day One, we focused on having your back.”

ETI is one of more than 450,000 businesses that together have received in excess of $89 billion under the Canada Emergency Wage Subsidy. The program covered a portion of a company’s payroll costs if they were forced to close or slow down due to the pandemic.

That subsidy is set to expire at the end of October, but Trudeau says the Canada Recovery Hiring Benefit, implemented in June, would be extended to the end of March if he is returned as prime minister on Sept. 20. When first envisioned, the rehiring subsidy was to run from early June to mid-November and cost about $595 million. It covers up to half the cost of increasing hours or wages for workers as companies ramp back up following pandemic shutdowns and slowdowns.

Trudeau also noted there are some industries still carrying a heavy burden from the pandemic, notably tourism and the arts. Both were singled out for special assistance in the Liberal campaign promises.

Tourism companies will continue to be eligible for both wage and rent subsidies through at least the end of the winter. Ottawa would also match ticket sales for arts and culture organizations, such as theatres, as many are still restricted by capacity limits.

It was also the second day Trudeau’s campaign was on the offensive, hitting up ridings the Liberals are hoping to pick up in the Montreal area and in Eastern Ontario.

At the ETI plant he was accompanied by Florence Gagnon, the Liberal candidate in Longueuil-St. Hubert. It’s a riding the Liberals haven’t won since 1980, but they came extremely close in both 2015 and 2019.

Later in the day Trudeau stopped at a pub in Napanee, Ont., in the Leeds-Grenville-Thousand-Islands and Rideau-Lakes riding, which former Liberal MP Mike Bossio lost to then-Conservative Derek Sloan in 2019.

Sloan, who was ejected from the Conservative caucus last winter, is now running as an Independent, and a vote-split potential with Conservative candidate Shelby Kramp-Neuman has the Liberals thinking it’s one for a potential win.

During his walk through the restaurant, patrons not expecting to meet Trudeau when they went out for dinner, lined up for selfies. One woman thanked him for shaving his beard.

Another waited patiently to tell him that he needed to put the same resources and energy into the climate change crisis as he did with the pandemic.

The calm nature of the Napanee stop was a sharp contrast to his next event in Cobourg, Ont., where a crowd of a couple of hundred Liberal supporters tried to drown out a small group of anti-lockdown and anti-vaccine protesters, shouting obscenities and demanding Trudeau resign or “go back to China.”

Trudeau acknowledged their presence by telling them they had the right to be heard but “so do all of us other Canadians who know the way through this is to get vaccinated,” he said.

Trudeau is trying to focus the Liberal campaign on the aid the Liberals provided, and the continuing assistance he is promising, but the escalating situation in Afghanistan is throwing him a little off his game.

Both Sunday when he announced that the election had started, and Monday ahead of his first campaign announcement, Trudeau started his speech talking about Afghanistan.

Trudeau spent time before Monday’s announcement being briefed on the situation. Liberal officials would not confirm that briefing was the reason his morning event was delayed more than hour.

This report by The Canadian Press was first published Aug. 16, 2021. 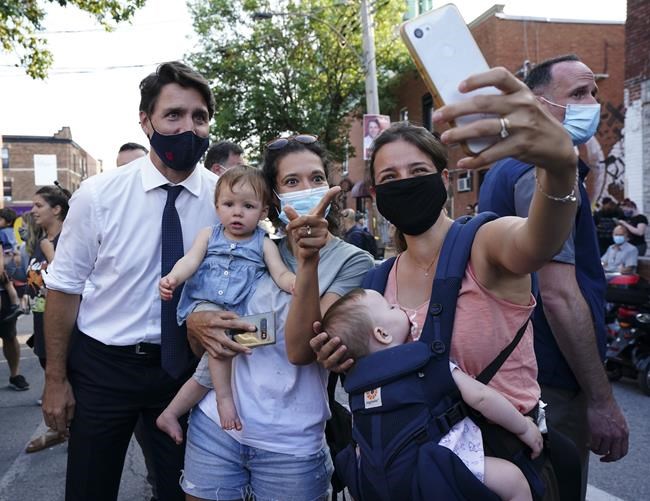