A look at how Manitoba restocks our lakes and streams

FALCON LAKE — Trevor Iwankow grabs a big walleye and gently squeezes out a stream of sperm from its belly — almost like it was a tube of toothpaste.

FALCON LAKE — Trevor Iwankow grabs a big walleye and gently squeezes out a stream of sperm from its belly — almost like it was a tube of toothpaste.

It lands in a silver pail at his feet, into the gooey mix of fish eggs already gently coaxed from the bloated bellies of female walleye.

Iwankow repeats the process several times, one drop of sperm after the other.

It is quickly added to two coolers of more eggs and sperm in another boat.

Bill Sorenson then takes over. It’s his job to stir the yellowy, soupy mixture.

It’s the time-proven way to make sure the eggs are quickly fertilized. In many ways, the success of this season’s walleye-stocking program by the Whiteshell Fish Hatchery Interpretive Centre rests in Sorenson’s big hands.

These two coolers — and dozens of others to be collected — will produce this spring’s walleye fry, which are about the size of a matchstick head, to be stocked in eastern Manitoba’s lakes in mid-May. Stocking maintains the province’s reputation as being one of the best places to fish for trophy walleye.

Constantly stirring, Sorenson periodically adds some cold water from Falcon Creek to each cooler to jump-start the magic of walleye reproduction.

Dyck and his colleagues from Conservation and Water Stewardship are working on this late-April day at a spawn camp, which consists of a series of nets set up for about a week near the mouth of Falcon Creek. It’s where walleye and other fish have come to naturally spawn for generations. Walleye spawn in the early spring when water temperatures are between 5 C and 11 C.

Iwankow, Sorenson and crew are merely speeding that process up.

“Fertilization takes 90 seconds to three minutes,” Dyck says, adding Sorenson is working with up to 700,000 eggs in the two coolers. That’s the number eggs taken from about 15 fish.

Within hours, the two coolers will be taken to the hatchery just north of West Hawk Lake where they will be raised in a lab-like building, in a series of aerated jars, for the next 21 days until they hatch. The fry are then shipped out to be stocked in the area’s lakes. About 10 per cent of fry hatched this season will go back to Falcon Lake.

“We’re running about an 80- to 90-per-cent survival rate,” Dyck adds. “The fry need live larva food, and we can’t supply enough for 10 million.”

That’s the estimated number of walleye fry expected to be released this spring by the Whiteshell hatchery. The hatchery has been in operation since 1942, and has recently seen a major upgrade in part to the $5 fishing-licence-fee increase brought in by the province two years ago. The extra funding has helped the hatchery more than triple the walleye fry it raises and double the number of trout fingerlings it raises (to 500,000 a year). The province also collects walleye eggs for stocking in western Manitoba at its Swan Creek hatchery.

The total number of walleye fry released by the province each spring is about 40 million to 60 million. To compare, Minnesota released 270 million walleye fry in 277 lakes last year.

Besides its stocking program, the province has also introduced limits on the size and number of walleye anglers can keep, two ways to protect the recreational and commercial walleye fishery. (The list of limits and locations can be found at wfp.to/anglerguide.)

It’s estimated for every dollar spent on raising and stocking walleye, the province earns about $60 — money spent by anglers in their pursuit of catching the next big fish. The province estimates fishing generates more than $200 million annually for the economy.

His job is to record the length of each female walleye and then implant, using a syringe, a microchip tag into their bellies. The chip, or passive integrated transponder tag, is about the size of a grain of rice and the same as the one you can implant in your dog or cat to identify it.

Kansas says the tag allows biologists to track the movement of the fish, and record how often they supply eggs to the hatchery. Female fish are now scanned each season. Fish without tags get one implanted. The province started microchipping walleye at Falcon Lake in 2008.

The more biologists know about walleye, the more they can tweak the hatchery and stocking program, and help the province develop conservation policies.

“There are hundreds of millions of fry getting stocked each year, but there is no historic rationale that it works,” Kansas says. “I’ve known over the years that you can’t just stock fish for the sake of stocking them because it doesn’t always work.”

So under his guidance, the province started doing lake surveys in the Whiteshell to get a better idea of the fish population in popular lakes so that it knows which lakes better support walleye stocking than others. About 25 lakes have been surveyed in the past six years.

“The reason we tag these fish is that we can tell which fish came back through one year, the next year, the next three years,” he says. “With the number of new fish we tag, we can get a population estimate and we can manage this lake at the same time.”

What they’ve also learned is the natural spawning area in Falcon Creek is not big, maybe the size of two parking lot stalls.

By Iwankow and Sorenson getting their hands wet, the restocking program can replenish the walleye population at Falcon Lake better than Mother Nature.

“It’s a net gain for the lake,” Kansas says, “because there’s no way that little piece of spawning habitat could do it.”

The tagging process will continue, as there will always be a younger generation of walleye beginning to spawn when they reach five or six.

“It will tell us how this run works and how we can make the best use of it,” Kansas says. “Otherwise we’re just coming in and taking eggs and then dropping the fry anywhere. I’m not saying that’s a bad thing. We just want to do things a lot more efficiently.”

What’s also helped the walleye population is a requirement on some lakes that walleye between 45 and 70 centimetres must be released.

Kansas says the catch-and-release requirements have resulted in improvement in size and age ranges on most lakes surveyed.

“There’s a nice peak of fish and then there are young ones coming up,” he says. “It’s proven itself. People are actually catching fish. Some lakes are better than others, but I’d say overall most of the lakes are doing really well, and they’ll just get better over time as long as we keep current stocking practices. And we’re just going to get smarter and smarter. We’ll stock better and the lakes will respond accordingly.”

It’s a lake sturgeon, one of about 35 in a protected outdoor tank at the Whiteshell hatchery. They are all roughly six years old, weighing on average about six kilograms.

They do not like being taken out of water and they don’t care much for being handled.

Bruederlin doesn’t give them a choice.

He plunks one on a sterile table in front of Jeff Long, the province’s manager of fish science and fish culture.

With Bruderlin holding it down, Long snips a tiny piece off the sturgeon’s pectoral (front side) fin. It will be tested to see if the fish has any disease. Each sturgeon is tested.

“Sometimes the stress from living in close proximity with other sturgeon can cause disease, and sometimes having a bunch of foreign species like me do this to you has an effect,” he says, referring to his handling and snipping of the sturgeons’ fins.

Each fish is weighed and measured, its numbers recorded just like a child’s growth chart.

The fish were caught in the Winnipeg River about four years ago, and are to be released in the Assiniboine River near Brandon in the next few weeks under a 1996 plan to reintroduce sturgeon to that part of the province. Historically, sturgeon were plentiful in the Assiniboine, but were wiped out decades ago.

Manitoba Hydro is working on a similar project to raise and release sturgeon in the Nelson River.

Sturgeon are the largest freshwater fish in Canada and can grow to 2.5 metres or more, weigh more than 140 kg and may live to more than 100. Their ancestors were around when dinosaurs walked the earth. Their numbers were once so high they were burned as fuel for steamship freighters on Lake Winnipeg.

As a result they were almost fished out of existence. None of the province’s sturgeon populations have fully recovered from overfishing and habitat loss. The province estimates there are less than 10,000 lake sturgeon in Manitoba. Sport fishing is strictly catch-and-release.

“My job is to make sure that the stock is there whether you fish them, photograph them, look at them or don’t care except to know that they are there,” Long says.

But before these sturgeon from the Whiteshell hatchery go anywhere, they will be each be equipped with an acoustic transponder.

“We can track them to see where they move,” Long says. “Rivers like the Assiniboine are vulnerable to flooding, but the next cycle is drought. It’s important to understand how these very long-lived species that we’re trying to recover withstand flooding and drought.”

The transponders will also tell biologists where on the Assiniboine the sturgeon like to go to spawn or to winter, in turn possibly requiring the province to create protected areas to help them survive, Bruederlin says.

More important to Long is the success of sturgeon recovery in the Assiniboine represents the long-term health of the river and its tributaries.

“We’re trying to make management decisions on a species that’s lived over millions of years,” Long adds. “It’s an iconic species. We are trying to put them back as best we can.”

Walleye are stocked as fry just a few days after they hatch. The hatcheries do not hold and grow walleye fry because they tend to eat each other when small. The province estimates walleye stocking returns $60 for every $1 spent.

The Whiteshell hatchery has produced about 300,000 trout of various kinds (lake, brook and rainbow) each year since 1943, totalling some 21.3 million fingerling trout that have been stocked in Manitoba.

Trout are stocked as fingerlings, about 12 to 18 centimetres in length, after being grown out at the hatchery. Stocking out trout at larger sizes increases their survival rate and provides better returns. Trout rearing capacity at Whiteshell is being increased to about 500,000 trout per year with the new renovations made possible by the $5 increase to the annual fishing licence in 2013.

Trout stocked at aerated lakes in the Parkland region returned $27 to $39 for every $1 spent on stocking.

The province says over the past 19 years about 31,700 lake sturgeon have been stocked into the Assiniboine River above the Portage Diversion. Sturgeon were caught in the Winnipeg, Nelson and Saskatchewan Rivers and later released in the Assiniboine.

Sturgeon released by year and size:

The province also stocks some lakes with yellow perch and northern pike to supplement “natural recruitment” and increase angling opportunities. 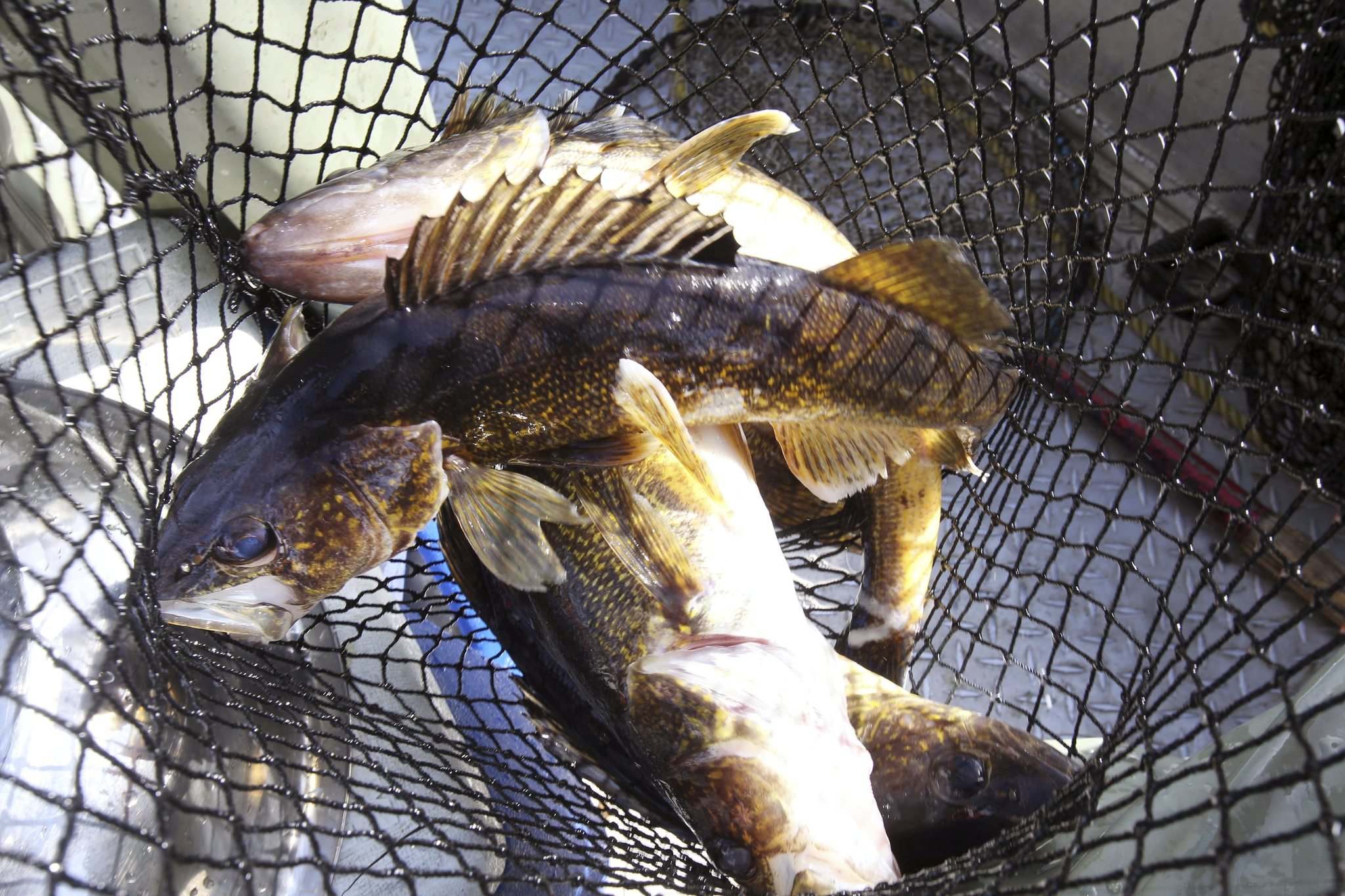