After years of lagging sales and financial uncertainty, Sears Canada finally pulled the plug on its retail operations on Oct. 10, 2017. Though the store’s history is not as deeply entwined with Winnipeg’s as Eaton’s or The Bay, the once upstart retailer has certainly had an impact on the city’s development.

After years of lagging sales and financial uncertainty, Sears Canada finally pulled the plug on its retail operations on Oct. 10, 2017. Though the store’s history is not as deeply entwined with Winnipeg’s as Eaton’s or The Bay, the once upstart retailer has certainly had an impact on the city’s development.

Sears’ bricks-and-mortar presence in Winnipeg can be traced back to 1948, when Toronto-based department store chain The Robert Simpson Company, or “Simpson’s”, opened a catalogue mail-order office on Portage Avenue at Vaughan Street kitty-corner from the Hudson’s Bay Company’s flagship store.

Simpson’s had been in the catalogue sales business since the 1890s and the following decade began promoting the publication in western cities. In 1929, it built a large warehouse in Regina to exclusively serve the western Canadian market.

The 3,000 square-foot Winnipeg mail-order office was the 169th in the retailer’s network. It allowed customers to browse through catalogues, place orders, pay bills and make returns. For those who couldn’t go in person, there were operators present to take telephone orders.

The goods would be shipped from Regina and arrive at the customer’s door in two business days.

By 1951, Simpson’s catalogue business was worth a reported $100 million and retailer Sears, Roebuck and Company of Chicago came calling to seek some sort of merger or partnership.

A year later, Simpson’s agreed to sell its mail-order division to a new company called Simpsons-Sears, which was owned equally by the two retailers. Simpson’s would continue to operate its existing department stores in Toronto, Montreal, Halifax, Regina and London.

Less than a month after Simpson’s shareholders approved the deal in October 1952, Simpsons-Sears announced over the next five years it would build 15 new stores at a cost of approximately $50 million. A small number of them would be their premier “A-type” department stores of around 200,000 square feet of retail space.

Winnipeg was on the list for an A-type store, but finding the right location proved difficult. In the meantime, the Portage Avenue Simpson’s was rebranded a Simpson-Sears mail-order office.

The retailer hired local developer and land-management company David Slater Ltd. to find it a suitable piece of land. It had to be outside the downtown but on a main thoroughfare and large enough for the store, a service centre, and more than a thousand parking stalls.

The search went on for more than a year until Slater and his colleagues had the idea to approach Jim Speers, the owner of Polo Park Race Track.

The track opened in 1925 in what was a mainly rural expanse just inside the City of Winnipeg’s boundary with the municipality of St. James. Since the Second World War, however, it found itself encroached upon by urban development from all sides, making it a very desirable piece of land.

An agreement in principle was reached in May 1954 between Slater’s company and the track’s owner to purchase the nearly 60-acre parcel of land. Development plans for the site were announced even before a final price had been negotiated.

Simpsons-Sears would purchase fifteen acres for its store from Slater. Company president E. G. Burton said: “Winnipeg is one of the most important cities in Canada and our company has given very close attention to the selection of a suitable site for a store. We are convinced that Polo Park is an outstanding location for a major regional shopping centre…”

George Slater Limited announced it would retain the remaining land and develop it into the city’s first suburban shopping mall.

On Oct. 31, 1955, the deal for the site was sealed when Slater handed over a cheque for “more than $500,000” to Speers, (later reports suggest that the figure was closer to $1 million.) Speers negotiated a concession that the track would not have to vacate until the end of the 1956 racing season to give it time to find a new home.

In the meantime, the final design of the $5-million building was being crafted.

Simpsons-Sears decided instead of using its in-house architect it would go with the firm chosen to design the mall, Winnipeg’s Green, Blankstein and Russell, which would work closely with the retailer’s merchandising team.

The building would consist of 270,000 square feet over three levels made up of two retail floors and an underground warehouse and loading area accessed by heated, covered ramps. It would also have two restaurants, the second floor Manitoba Room and the Peggy Kellogg coffee shop on the main floor.

The exterior of the building would be clad in Tyndall Stone. The Portage Avenue frontage presenting a splash of colour with a 45-metre long mosaic in blue Italian glass by University of Manitoba art professor George Swinton.

Surrounding the store was an 8,000 square-foot outdoor seasonal centre, an automobile service centre and 1,400 parking stalls for customers and the approximately 1,000 staff who would work there.

It took a year longer than expected to get shovels in the ground, but work finally got underway in the summer of 1958.

On the morning of May 6, 1959, more than three months before Polo Park Shopping Centre opened, customers lined up for the grand opening of the city’s first Simpsons-Sears. It was the fourteenth in the retailer’s chain and one of three “A-type” stores in the country, the others being in Hamilton and Vancouver.

On-hand for the opening were various Simpsons-Sears officials including J.C. Patterson from the Toronto office who was the Winnipeg store’s first general manager. Alderman A. E. Bennet represented Mayor Stephen Juba.

It took another decade for Simpsons-Sears to decide to open a second Winnipeg store. By 1969, the company billed itself as a “Canada’s fastest growing retailer.” There were 33 stores across the country, eight of which were built in the previous three years.

Simpsons-Sears’ real estate division scouted out land at the northern edge of the City of West Kildonan. The neighbourhood known as Garden City had been developing since the late 1950s and there were plans for as many as 10,000 new residential lots to come on the market in the years to come.

Simpsons-Sears, in partnership with Columbia Commonwealth Corporation of Toronto, purchased 40 acres of land at the corner of McPhillips Street and Leila Avenue. The retailer would use its ten acres on the more prominent west end of the lot to build a store while Columbia Commonwealth would develop the remainder into an enclosed 35-store shopping centre.

The store, which was likely designed in-house by Simpsons-Sears, was single-storey with 100,000 square feet of space, but constructed so an additional floor could be added. Over each of its three entrances were 30-foot wide concrete canopies each weighing around 30 tons and faced with white quartz stone aggregate.

As with the Polo Park store the development included an automobile service centre.

The name Simpsons-Sears began to disappear in 1973 when part of the 1952 partnership agreement that prevented it from entering any market in which Simpson’s operated a department store, Toronto, Montreal, Halifax, Regina and London, was lifted. New stores in those cities used the name Sears.

In 1978, the hyphenated name was dropped all together after the Hudson’s Bay Company purchased Simpson’s and the partnership was dissolved.

In the decades to come, Sears Canada opened two more stores in Winnipeg, at Kildonan Place in 1980 as an original anchor tenant and at St. Vital Centre, taking over the space vacated by Eaton’s in 2002.

Sears will be just a memory by the end of the year, but its earliest choices for store locations at Polo Park and Garden City triggered the development of desirable retail and entertainment hubs that will live on long after their name disappears from our retail landscape. 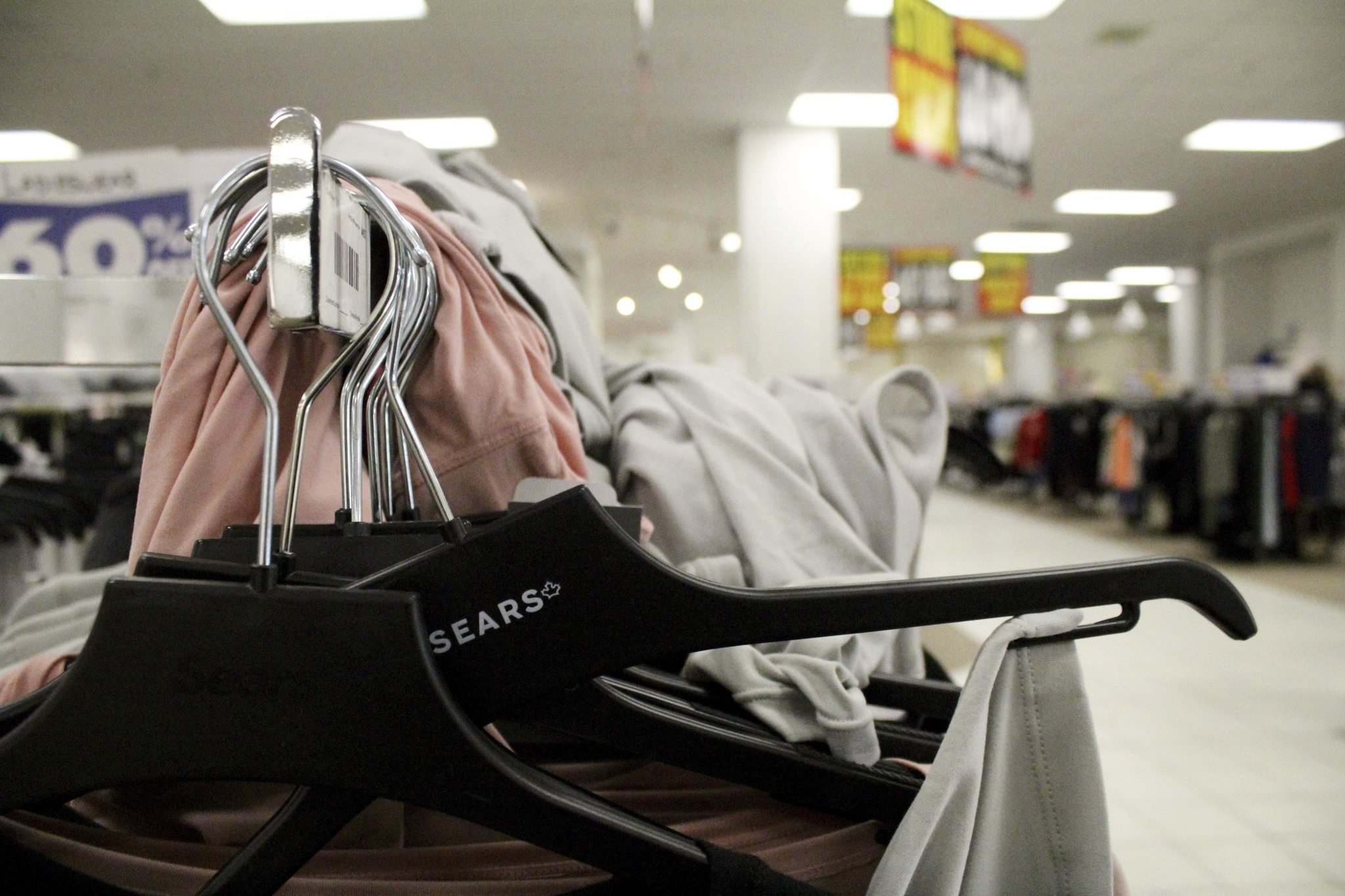