The Manitoba Marathon’s grand return will need a do-over next year after a scorching summer morning derailed the event’s 2022 edition.

The Manitoba Marathon’s grand return will need a do-over next year after a scorching summer morning derailed the event’s 2022 edition.

The plug was pulled on the annual Father’s Day run shortly after 8 a.m. when wet-bulb readings, which assess a runner’s exposure to heat stress, eclipsed the recommended 30 C threshold.

Manitoba Marathon executive director Rachel Munday said reading was at 31.7 C and climbing when the race was called. Even the fittest of athletes shouldn’t race above 30 C mark, she added.

Visibly disappointed, Munday said a significant amount of work went into staging the marathon, and a smaller group of staff and volunteers prepared to welcome runners back to IG Field for the first time since 2019.

“We anticipated that we may have to accelerate the closure, but we also anticipated it would probably be mid- to late-morning,” said Munday. “There was no scenario where we thought we would be closing the course as early as (just after 8 a.m.).” 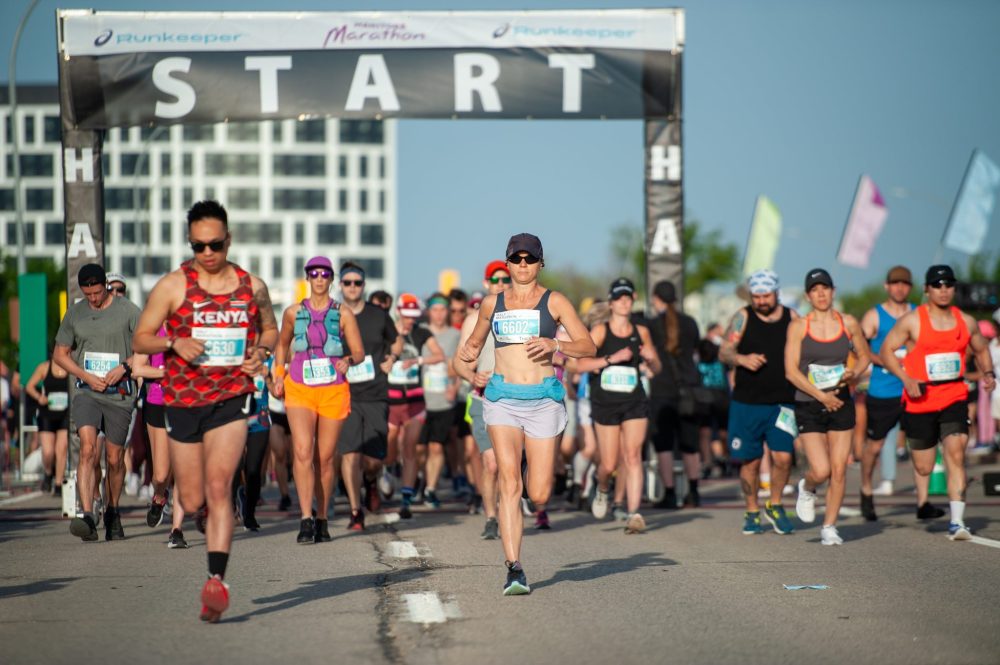 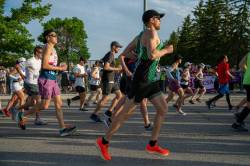 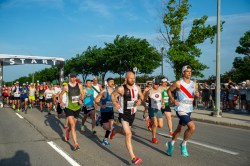 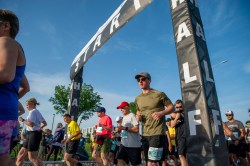 For many participants, their trip back to stadium was by bus, and the course closure meant finishing times were recognized unofficially. Those fortunate to actually cross the finish line did so with arms held high and smiles on their faces.

And there was a common sense of gratitude to be gathering at full capacity for the first time since before the pandemic.

Upbeat music, the sound of medals clanging in the wind and a sea of cheers echoed as Cam Levins of Black Creek, B.C., crossed the finish line.

The two-time Olympian set a course record, with a time of approximately one-hour and three minutes in the Canadian Half Marathon Championships. Levins was drenched in sweat and draped himself in the Canadian flag to celebrate the victory. He had his sights set on putting Canada’s half-marathon record in stone after unofficially running a 1:01:04 last spring, but it wasn’t meant to be.

“The heat, especially combined with a bit of humidity, can take a lot out of you, it’s actually conditioned similar to the Tokyo Olympics last year,” said Levins. “As soon as I saw the weather this weekend I knew a good time was out the window for me, or at least a personal best.”

Vancouver’s Natasha Wodak, another former Olympian, was announced as the women’s Canadian half-marathon champion in a post-race award ceremony with a time of 1:15:20. Wodak said that after consulting with a coach, she knew the conditions would put her below her desired time.

Wodak also said that she’s never willing to compete in a race where she can get by with barely winning, adding that her time is not reflective of the effort put into Sunday’s race.

“Every time you hit a water station or a sponge station and you cooled yourself down it was like… Mario Kart when you hit the lightning bolt,” she said with a chuckle while talking about the extreme heat. “I’m not kidding, I was like ‘woo, I’m a new woman,’ I actually said that out loud.”

Almost immediately after Levins and Wodak were awarded Canadian Half Marathon Championship hardware a wave of confusion made its way over the IG Field turf. Word that the course had been closed and the marathon was off started to trickle in, but numerous participants continued crossing the finish line at their own risk.

Zahara was notified of the course closure early in the event but finished the race at his own peril. He praised those that were helping out on the course, citing Winnipeg as a great volunteer city. While Zahara won’t be officially taking home the first place prize, the embrace he shared with his young children following the race is likely just as meaningful.

“I walked through every water station — at a certain point it just becomes survival mode,” he said. “There’s no dominant runners left on the course… you just want to get to the finish in one piece.”

Gabby Ilagan barely made it to the halfway point of the 50-kilometre ultra run before the course closed. The Winnipegger has run marathons in New York and Chicago and beamed with pride talking about a 100-km event he did in Lethbridge, Alta. However, none of the marathons he’s raced have ever been stopped, even in hotter temperatures.

“It kind of sucks when we put in lots of training, but that’s just the way it is right?” he said.

Ilagan found out the marathon was over at 8:30 a.m. and said the conditions were doable as long as you soaked yourself in water and kept drinking fluids. He added that he continued running until being told to move to the sidewalk and that there’d be no water or aid stations coming up.

La Broquerie’s Jaala Van Dongen’s race also ended near the halfway point of the full marathon. The former Boston Marathon runner felt she could’ve continued and was saddened by the fact a great race was negated.

“There was a lot of people that weren’t sure what was going on. The police said it was closed, then someone said our times would count but then someone said they weren’t and we didn’t know,” said Van Dongen. “It’s kind of sad because I was doing really, really well.”

Christie Paterson was a winner Sunday, regardless of the fact her time didn’t count and she finished nowhere near first place. Paterson, a neonatal intensive-care charge nurse, was overwhelmed with emotion as she crossed the finish line side-by-side with two friends in her first half-marathon.

She was hailed by them as a healthcare hero, who even while working exhaustingly long shifts on the frontlines, still found the time to train for the event.

“Last year I couldn’t even run for two minutes because I was really out of shape,” said Paterson. “So, I’ve been training for like a year to do this with help of friends and this was the year to do it.

“These are my cheerleaders who helped me through this, I wouldn’t be able to do it without them,” she added.

Patterson wanted to run the race since she was 20 years old and dedicated the performance to her late brother Kelvin, who was her inspiration to get into nursing. She also had his favourite song, Fade To Black by Metallica, playing in her ears a few times during the race.

“It’s a gift to be able to run, it’s a gift to have this all open again,” said Patterson. “It’s just a blessing to have legs that can carry us and friends that support us and… volunteers that come and spray us in the side of their houses.”

Although the mercury mauled the 2022 Manitoba Marathon, Munday didn’t see the event as a lost cause. She pointed out the many smiling faces in attendance and how great it was to be back in action. But she expressed sympathy for those in the full and half marathon, as well as the relay race and 50k ultra run that didn’t get to properly finish their events and hoped they’d do it virtually at some point.

“We’re all happy to be together,” said Munday. “We were so hopeful that we would be able to do it.”