THE NDP pledged to fund 100 more police officers in Manitoba -- including an extra 50 in Winnipeg -- and create a first-in-Canada weekend court to speed criminal prosecutions as part of its crime-fighting strategy unveiled Friday.

THE NDP pledged to fund 100 more police officers in Manitoba — including an extra 50 in Winnipeg — and create a first-in-Canada weekend court to speed criminal prosecutions as part of its crime-fighting strategy unveiled Friday.

The NDP promised 25 more police cadets for downtown Winnipeg and another 25 in rural and northern Manitoba.

The party’s anti-crime platform focuses on prevention, faster prosecution and improving laws. The package is projected to cost $13.2 million.

The Conservatives released their own crime-prevention package earlier in the week.

Selinger accused his main rival, Conservative Leader Hugh McFadyen, of offering Manitobans a “miracle cure” for crime even though there’s no such thing.

“We know that tackling crime means working with everyone: communities, local and federal governments, prosecutors, police officers, teachers and youth workers. It’s how we keep building a safer, better Manitoba,” he said.

Like the Tories, though, the NDP would expand the use of electronic-monitoring bracelets — now worn by serial car thieves. The New Democrats would use the devices — in consultation with police — to track convicted sex offenders and those found guilty of domestic assaults and other crimes.

The NDP would lure judges out of retirement to staff courts on weekends to add capacity to the court system.

On Friday, the NDP also renewed a pledge to hire 53 new prosecutors and 29 paralegal and clerical staff by 2016.

McFadyen said the NDP’s platform on public safety is virtually the same as it was in 1999, when the party won office.

The Liberals said the NDP is trying to “out-Tory the Tories on crime — and failing.” The Grits have proposed helping people battle addictions and reducing school drop-out rates.

— with files from Bruce Owen 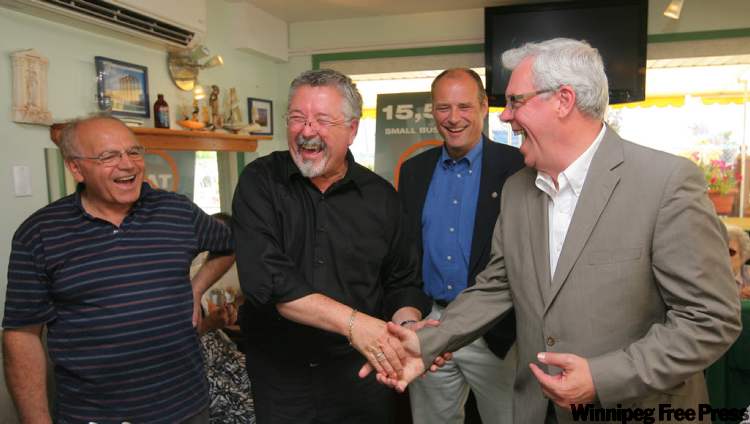