Thousands of kilometres and less than two years apart both a soldier serving in the Second World War and his wife at home died by drowning.

Thousands of kilometres and less than two years apart both a soldier serving in the Second World War and his wife at home died by drowning.

Now, a retired Dutch diplomat, is trying to find the soldier’s photo — and the pictures of 11 other Manitobans who died in the war, before their images are lost to history.

Pieter Valkenburg, who now lives in Prince Edward Island, is working with the Faces to Graves project at the Canadian War Cemeteries in the Netherlands to create a digital archive with a photo and biography of every Canadian soldier interred in that country. One of the people he is focusing on is Rifleman Tom Chaske of the Royal Winnipeg Rifles.

Valkenburg said the 24-year-old Chaske, who was from the Long Plain First Nation but also lived for a time on the Roseau River First Nation, was part of a crew of soldiers being transported to repair a road, but drowned with six others when they were pinned under a vehicle they were in when it slipped off a dike and flipped over into a flooded field on Dec. 12, 1944.

He said Chaske’s wife, Marjorie, tragically drowned in the Roseau River in southern Manitoba just a year and a half later.

Valkenburg said they have tried, but so far haven’t been able to find any living relatives. The couple’s only child, Elizabeth, died before the war’s end.

As well, Chaske’s parents, Tom and Nyjookwah, of Edwin, Man., his six sisters and a brother all predeceased him.

“It’s hard to find someone when their family has died,” Valkenburg said.

“When I do the research I look at the military service file. I go on Ancestry and through Library and Archives Canada, and I call Legions. Then you have to ask the public.”

Valkenburg said he considers what he is doing a mission because he is still grateful the Canadian Armed Forces helped liberate his country from the German army.

He estimates he has helped find the photos of almost 200 Canadians, but there are about 1,950 soldier grave sites still needing photos. There are 7,650 Canadian soldiers buried in the Netherlands who were killed during the war.

“At some point of time people will be able to see a photograph of the soldier and information about them without going to Europe,” Valkenburg said.

“They want to put a face to every grave.”

Other Manitoba soldiers he is currently looking for are:

If a photo is found, Valkenburg can be reached at memorialtrail@gmail.com

Hunting for photo to honour Manitoban

A name without a face 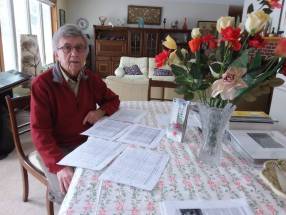