What price would you put on the lives of two murdered Indigenous women?

What price would you put on the lives of two murdered Indigenous women?

Back on June 20, in the wake of discovering the remains of Rebecca Contois at the Brady Road landfill, the Winnipeg Police Service learned the remains of two additional murdered women — Morgan Harris and Marcedes Myran — were sent to the privately owned Prairie Green landfill north of the city. They also learned it was likely the remains were taken there on May 16, more than a month earlier.

WPS Chief Danny Smyth previously disclosed that as part of what has become a serial murder investigation, a plan for searching Prairie Green was devised and then rejected. WPS sources said the cost of the initial plan, which would not have represented the entirety of the efforts to search the Prairie Green site, was $150,000. Although that seems like it could only have been the cost of a very limited search, it would have represented a start.

That has become a live issue now that Mayor Scott Gillingham and Premier Heather Stefanson collaborated to convince Prairie Green to cease operations pending a review of the practicality of conducting a search. In short, Smyth’s decision to reject that plan now seems deeply, deeply flawed and profoundly insensitive.

Smyth was not wrong to express his concerns about the near impossibility of locating something as specific as human remains in Prairie Green more than a month after they were taken there. Hundreds, if not thousands, of trucks full of refuse had been taken to the facility, covered in clay and compacted by heavy machinery.

The big mistake made by Smyth was not recognizing the importance for the families — both in practical and symbolic terms — of seeing the city’s senior-most police officer willingly accept a near-impossible task.

Searching under difficult circumstances and not finding anything would be a tragedy. But not taking the time to do any search of any kind is more of a scandal.

If he wanted to know the incredible emotional value of near-impossible challenges, Smyth could have visited with NDP MLA Bernadette Smith to discuss Drag the Red, a volunteer group that searches the Red River for the bodies of missing and murdered indigenous women and girls.

Searching under difficult circumstances and not finding anything would be a tragedy. But not taking the time to do any search of any kind is more of a scandal.

Drag the Red was formed in 2014 after police found the body of Tina Fontaine floating in the Red River, wrapped in plastic. The group has continued its work even though it has been told that river currents, and the nature of the river bed itself, make it extremely unlikely any remains could be found.

Smith, whose sister Claudette Osborne disappeared in 2008, has remained undaunted by the lack of results, indicating that the act of searching provides some comfort to the families of the missing women. And that by maintaining a presence, it may discourage other people from trying to dispose of bodies in the river.

No matter what you think about the value of Drag the Red, you can be sure that its existence is a reminder that far too many Indigenous women and girls have gone, and continue to go, missing.

All of this brings us back to the decision by Gillingham and Stefanson to ask Prairie Green to pause operations at the landfill, and the company’s quick decision to comply. A decision that has raised new questions about Smyth’s decision to reject a search plan devised by his own people. A decision, it turns out, he may not have been qualified to make.

In an interview on CJOB radio Thursday, Smyth said that when he rejected his own department’s initial plan for a search of the dump, police did not have the internal expertise to determine the likelihood of success.

He said the job was more of an archeological dig than a police search.

“I think the right people need to be the lead on that and that’s not a police skill,” he said.

If, in fact, the WPS did not have the expertise to conduct a search at Prairie Green, why didn’t Smyth consult with someone who did? And why did he not advise Prairie Green to shut down until that determination could be made?

By waiting another six months, Smyth has taken a slim chance and reclassified it as “no chance.”

At worst, this is yet another example of law enforcement putting no value whatsoever on the life of an Indigenous woman. The same mindset that caused police to ignore and neglect decades of unbridled violence against Indigenous women and girls.

But even if that’s not the real problem here, there is more than enough evidence that Smyth has been grossly incompetent in managing this case.

It seems clear the WPS should have ceased operations at Prairie Green, called in forensic or archeological experts to consult on a search and made some effort to scour the landfill. By waiting another six months, Smyth has taken a slim chance and reclassified it as “no chance.”

The families of the victims, and others, have called for his resignation. As more information comes out about what he did not do and what he did not know, that is an appropriate demand.

But what else can be done? Now that the landfill has paused operations, the city and province could consider a plan to keep it closed.

There would obviously be a cost in helping the refuse company find another site.

But whatever that may be, it is a fraction of the value of the lives of the women who are buried there.

Police chief will meet, will not quit

Vigil for slain women: ‘We’re in a state of emergency’ 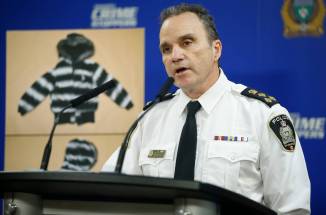