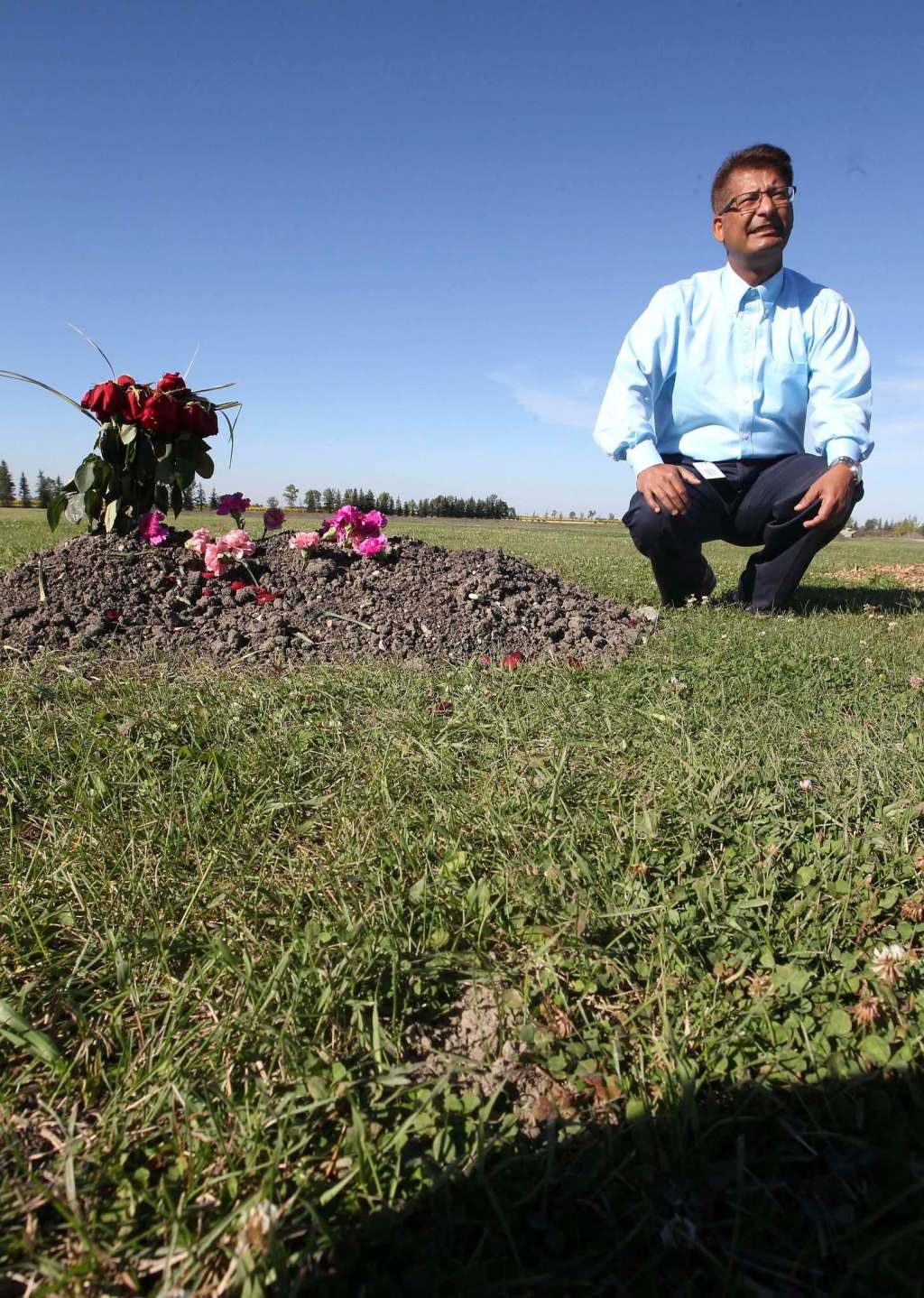 There are just a few small mounds of freshly turned earth — a bouquet of red roses marks an infant’s final resting place on one — but no visible sign this is the Muslim section of this city-owned cemetery.

There’s no crescent moon on a gate or any Islamic symbol to indicate a newly allocated section at the Transcona Cemetery is for Muslim burials. The only visible difference from the rest of the graves is the Muslims aren’t buried east to west in straight rows but diagonally, facing northwest, in the direction of Mecca.

A row of young trees planted beside the road separates the big, empty field set aside for Muslim burials from the rest of the graves with Christian crosses, Virgin Mary statues and non-religious headstones. It’s much-needed room for the fastest-growing faith group in Canada.

“The community is growing — especially in the last five years,” said Abdul Aziz, the volunteer who oversees the Manitoba Islamic Association’s funeral committee.

STE. MADELEINE — George Fleury’s family had been travelling by horse-drawn wagon for weeks with two other Métis families — much like the buffalo hunts of yore — searching for work.

It was the Great Depression, and they were picking up menial jobs — digging seneca roots, cleaning houses, clearing brush, doing farm work —to support their families.

When they returned to their Métis village of Ste. Madeleine in 1939, their house was smouldering from a government-ordered fire. The village had been razed.

“All that was left was our kitchen range sticking out of the ashes, and the bed rails,” said Fleury, 81, who was four years old at the time.

PHOTOS BY BILL REDEKOP / WINNIPEG FREE PRESS (EXCEPT WHERE NOTED)
A cross ringed by the wheel of a Red River Cart symbolizes a Métis cemetery. In 1938, people were forced from Ste. Madeleine, a Métis village, and their homes set ablaze to make way for pasture. The cemetery is all that remains. 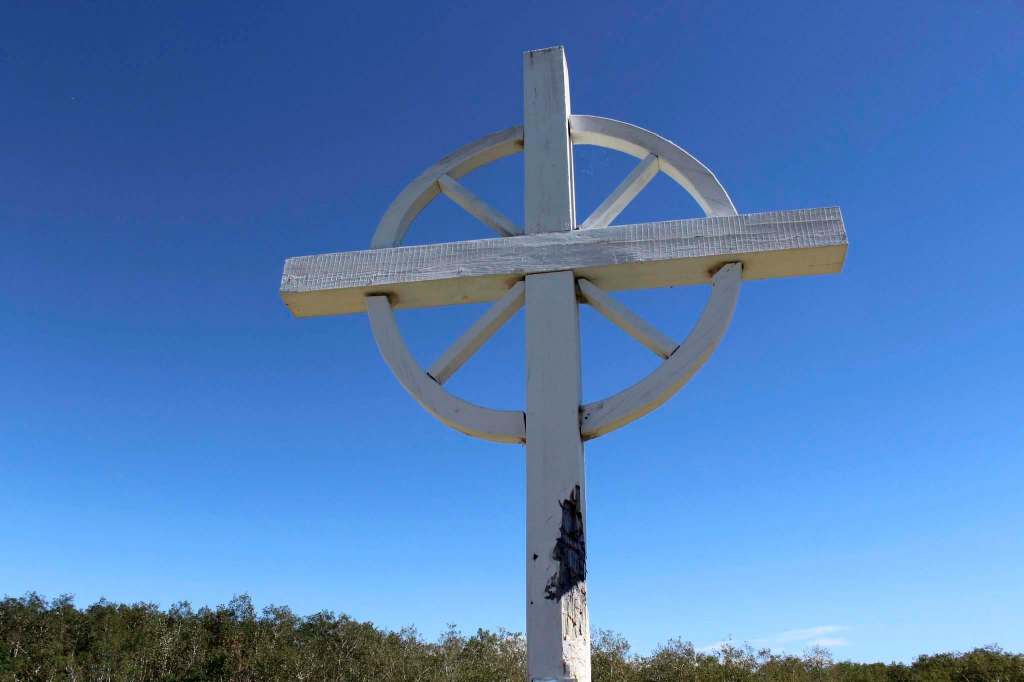 HEADINGLEY — At the Headingley Gaol Cemetery, it’s a struggle to feel the sympathy and respect one usually has at a burial ground.

The men here are all buried for a single reason: they murdered and were executed for their crimes.

Squarok had apparently been going around telling everyone Piniak was to blame for his baby’s death. Squarok claimed Piniak let the baby freeze to death.

PHIL HOSSACK / WINNIPEG FREE PRESS
A grave is seen in the shadow of a crucifix that marks the small cemetery in the middle of a field west of Winnipeg. 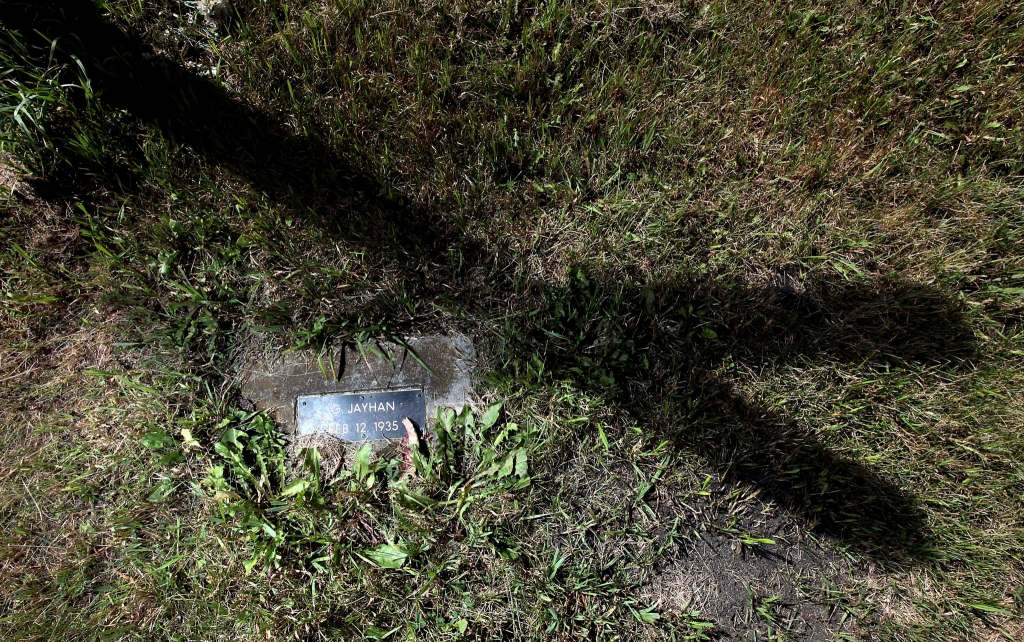 On land they homesteaded, pioneers given eternal rest

On land they homesteaded, pioneers given eternal rest

Membership has its privileges, and in the case of the pioneer cemetery inside Birds Hill Provincial Park, the application to join for eternity is onerous: you would have had to have your great- or great-great-grandparents settle in the area.

That also meant they had to buy, clear the land, and scrape out an existence on property much of which was more valuable for the rock and gravel underneath than the soil on top.

Just how exclusive is this cemetery?

“I wouldn’t be able to be buried here even as president of the (Immaculate Conception Ukrainian Catholic) church council,” Gerald Palidwor said with a laugh during a recent tour of the cemetery.

RUTH BONNEVILLE / WINNIPEG FREE PRESS
Gerald Palidwor may be president of the Immaculate Conception Ukrainian Catholic Church council, but he still can’t be buried in the pioneer cemetery. 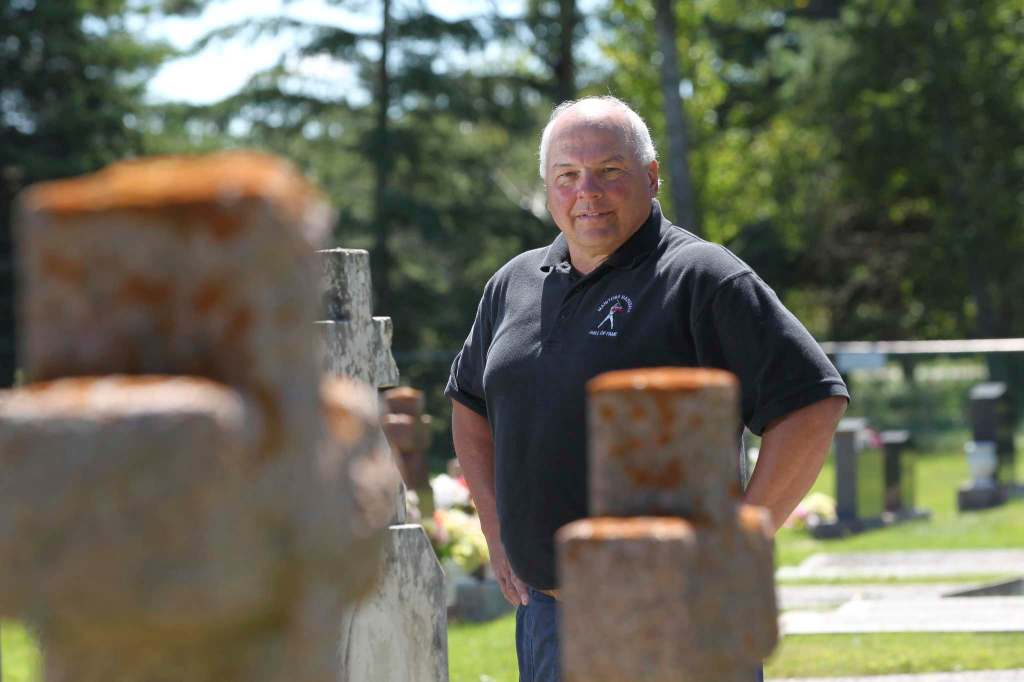 St. James Cemetery a who’s who of local history

St. James Cemetery a who’s who of local history

While many of the founding pioneers of Winnipeg are resting eternally at an old cemetery on the banks of the Red River in the city, their sons and daughters are a few kilometres away along the Assiniboine River in St. James Cemetery.

Walking through the park-like setting, just a stone’s throw from the Polo Park mall, and looking at headstones more than a century old, you quickly see many of the same names echoing those in the St. John’s Cemetery, the oldest European cemetery in the province — McDermot, Bannatyne, Mulvey, Omand and Henderson.

Margaret Steele, the manager of the St. James Cemetery, said there’s a reason for the similar names.

“The original pioneers had their land along the Red River,” Steele said. 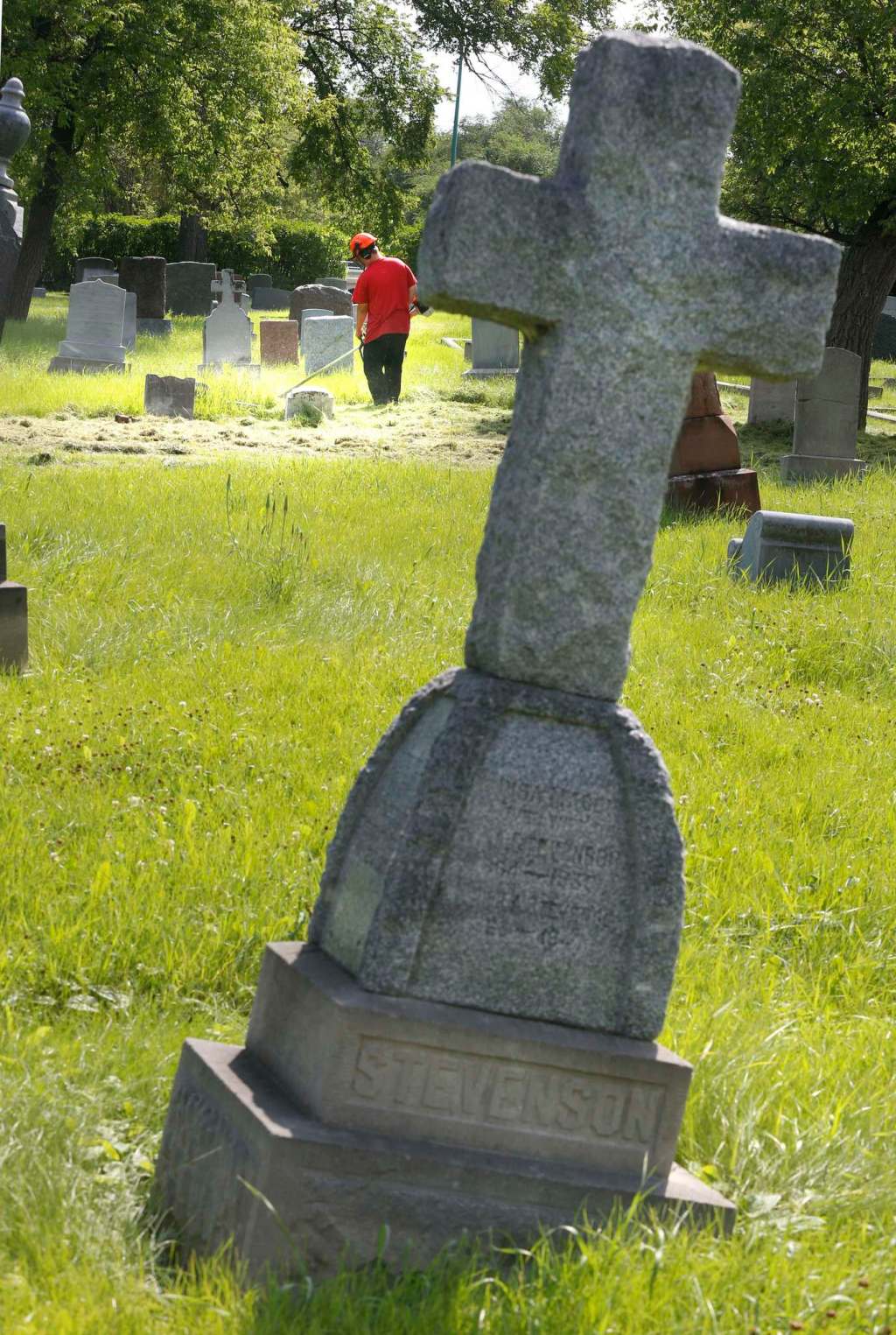 Elmwood Cemetery's stories include teen victim of the Dark Strangler

Elmwood Cemetery's stories include teen victim of the Dark Strangler

Lola Cowan, 14, knocked on the rooming-house door at 133 Smith St., just off Broadway and a few blocks from where she lived.

It was June 9, 1927. Lola’s father had come down with a lengthy illness and was unable to work. So Lola would go out evenings, selling bouquets of decorative paper flowers — she made them from coloured crepe paper — to help support the family. She sold them for 25 cents a bunch.

Her little brother Hugh, 12 — he died in 2002 and is buried beside her — usually accompanied his older sister but didn’t that evening. It tormented him the rest of his life.

RUTH BONNEVILLE / WINNIPEG FREE PRESS
Families and area residents use the scenic cemetery grounds to walk, run or jog along circular roads that run through the park. 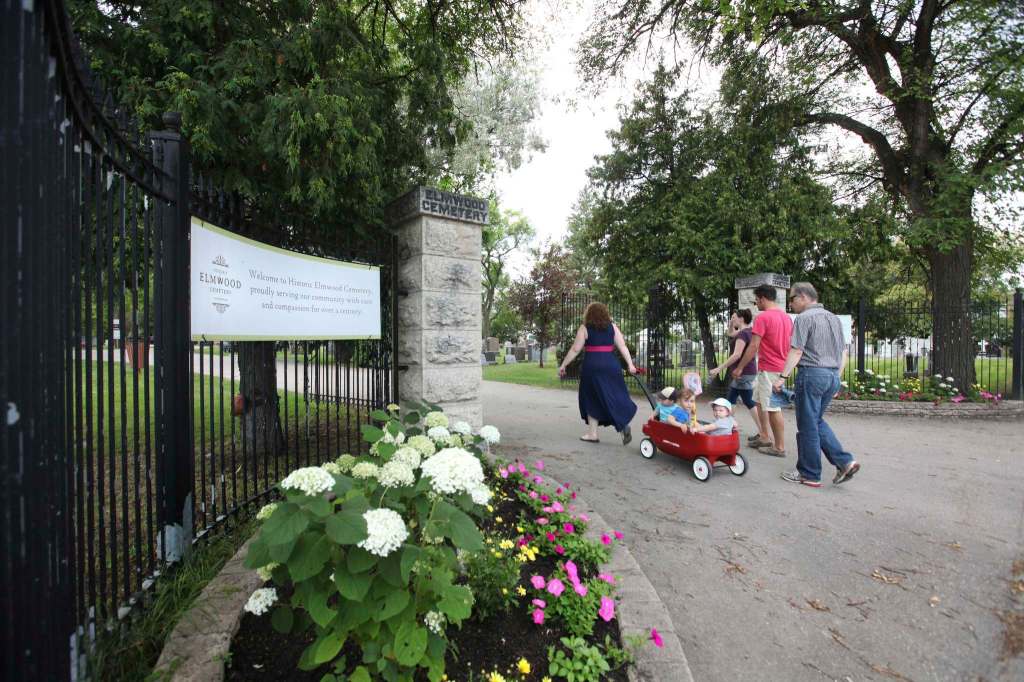 Western Canada’s oldest Jewish cemetery is in one of the last places you’d expect to find it — hidden away in the bush at the centre of a development boom in Transcona.

“This poor little cemetery is stuck in the middle of nowhere,” said Bill Croydon, who’s lovingly tended Children of Israel cemetery for the last eight years for Congregation Shaarey Zedek.

The cemetery located north of Reenders Drive — just behind the Kildonan Place mall — was used from 1883 until 1935.

To get there now, a visitor can park behind the empty Target store, walk north across Reenders and then wade through a field of thigh-high Russian thistle towards the cemetery’s 12-foot chain link fence.

ZACHARY PRONG / WINNIPEG FREE PRESS
Bill Croydon, the Shaarey Zedek maintenance supervisor, opens the gates to the Children of Israel Cemetery. It is the oldest Jewish Cemetery in Canada. 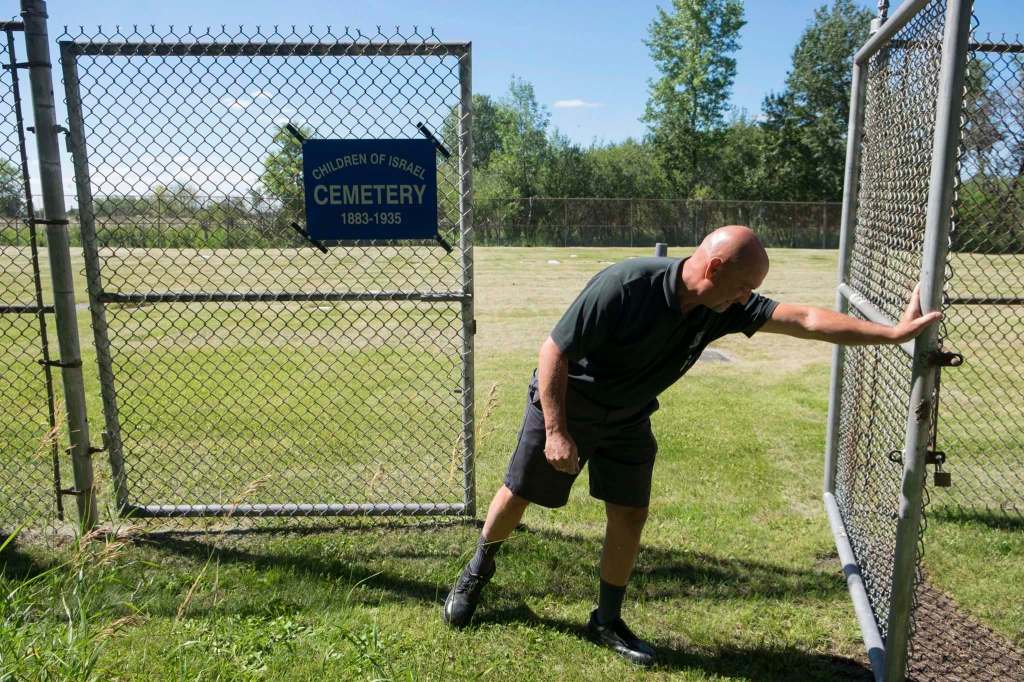 Elzéar Goulet, who is buried in the St. Boniface Cathedral cemetery, went from mailman, to Louis Riel aide, to martyr in a matter of months in 1870.

As letter carrier, Goulet delivered mail between the Red River Settlement and Pembina in the Dakota Territory.

In Riel's provisional government, Goulet sat on the seven-person tribunal that sentenced Thomas Scott to death. Scott was an Orangeman from Ontario who Riel had executed for insubordination and armed revolt.

He became a martyr to the French and Métis community while walking down Main Street in early September. Four members of the Wolseley Expedition, which had been sent to capture Riel, rushed out of a saloon intent to punish Goulet for his role in Scott's death. 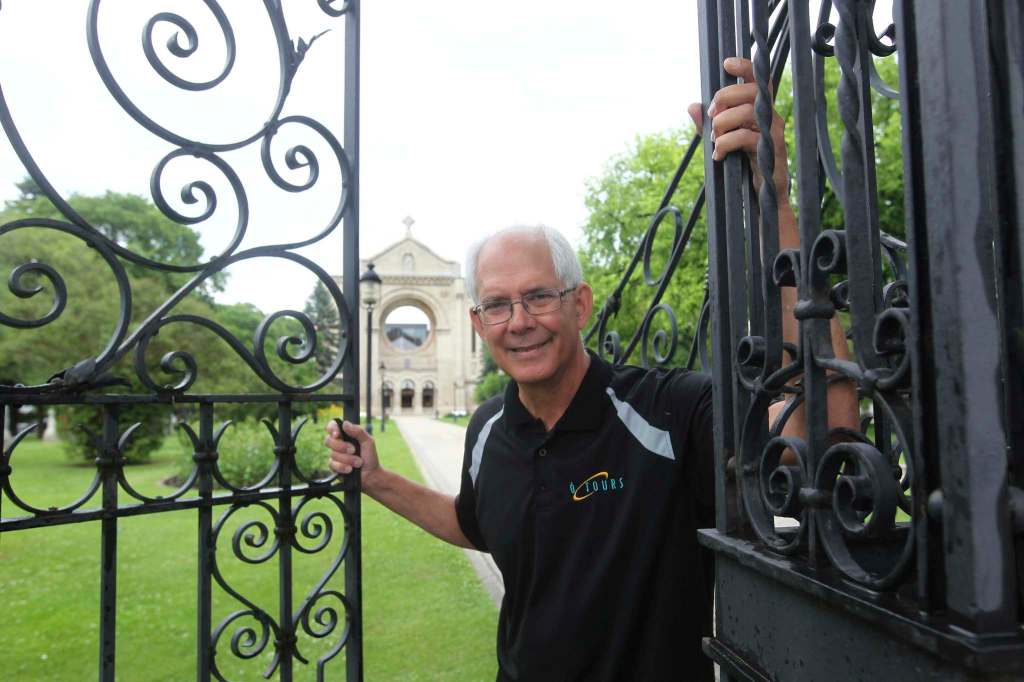 If there is a more Sisyphean task than cutting the grass at the historic St. John’s Anglican Cathedral cemetery, Dennis Beaulieu would like to know what it is.

Beaulieu’s been mowing the nine-acre Winnipeg cemetery’s grass for 16 years. It takes almost a week-and-a-half for one person. You’re never mowing in a straight line. It’s forward and back, this way and that, navigating corner after corner, around gravestones representing 9,600 burials.

Then it’s time to start over again.

The difficulty isn’t just cutting around headstones. The difficulty is this was a pretty fashionable cemetery in its prime. There was, and probably still is, status to being buried here. Many people interred were the city fathers, captains of industry, the people that had future streets named after them — Pritchard, Sutherland, Logan, Matheson, Inkster, to name a few.

RUTH BONNEVILLE / WINNIPEG FREE PRESS
Groundskeeper Dennis Beaulieu works his way around the headstones and uneven ground to mow the lawn at the historic cemetery near St. John’s Anglican Cathedral in Winnipeg. 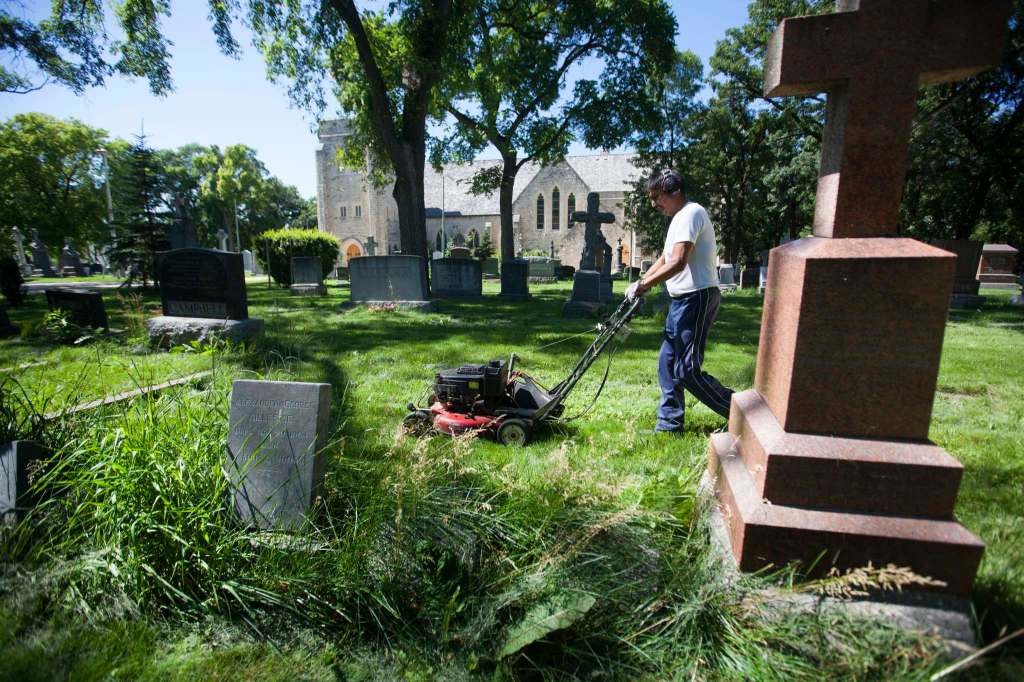