IT seems like it's going to take a lot more than a 2-1 win over the Stanley Cup champion Boston Bruins and the loudest night of the season so far at the MTS Centre to satisfy Winnipeg Jets coach Claude Noel.

IT seems like it’s going to take a lot more than a 2-1 win over the Stanley Cup champion Boston Bruins and the loudest night of the season so far at the MTS Centre to satisfy Winnipeg Jets coach Claude Noel.

Noel had the team back on the ice Wednesday morning at the MTS Iceplex and said after the workout he was hoping for more.

“It was a decent practice, hard a little bit, and I wish our focus was a little bit better,” said Noel, his team now 12-11-4 and above .500 for the first time this season. “But it was OK. It wasn’t great. It’ll be better tomorrow.”

Noel said he’s simply happy to have some practice time with his team.

“The last time we practised two practices before a game, I can’t remember when that was,” he said, looking ahead to Friday’s contest here against the Carolina Hurricanes. “Today was a good day to work, and we did, but mentally we weren’t engaged as we should have been.

“That’s just part of learning what we need to get done here.”

— Noel said Wednesday that defence and details have been more important to the Jets as they’ve put up a mark of 7-2-1 in the last 10 games.

“It’s nothing that’s been reinvented,” the coach said. “It’s just the conscientious effort to do the right things, managing the puck, controlling bluelines, getting it in, getting it out, not creating turnovers or risky plays, Some things are happening good for us. We’re scoring the first goal of the game, so we’re playing with a lead. There’s a different mentality there. When that happens, you’re not catching up and you don’t need to play with such risk.”

On the subject of risk, the coach was positively glowing on the matter of defenceman Dustin Byfuglien’s recent contributions.

“Yes. He’s playing really good, playing the game that’s in front of him,” Noel said. “(Tuesday) he played responsible. He played heavy. He made good decisions. He played a 1-0 game, some risk but not too much. Clearly he understands what’s at stake here and he’s putting his game out there, which is perfect.”

— The Jets have four defencemen still on their injured reserve list.

Two, Randy Jones and Ron Hainsey, may be close to returning to action and two, Derek Meech and Tobias Enstrom, as still several weeks away.

Enstrom at least provided some good news Wednesday when he appeared at practice with his teammates for the second time in the last week.

He was sidelined Oct. 31 in Florida with a broken collarbone.

“It’s feeling better and better and I’m really happy to be out there,” Enstrom said. “We’ll keep moving forward. Everything feels good right now. Hopefully I can come back a little quicker. That’s what I’m hoping for. But the team is doing great and I’m happy for that.”

Enstrom is clearly eager to get to his return date.

“I would like to get back next week, or even this week, but that’s probably not an option,” he said. “But I’m going to keep in touch with the trainers and hopefully agree on something good for the team for me.”

Antropov may return to ice Friday 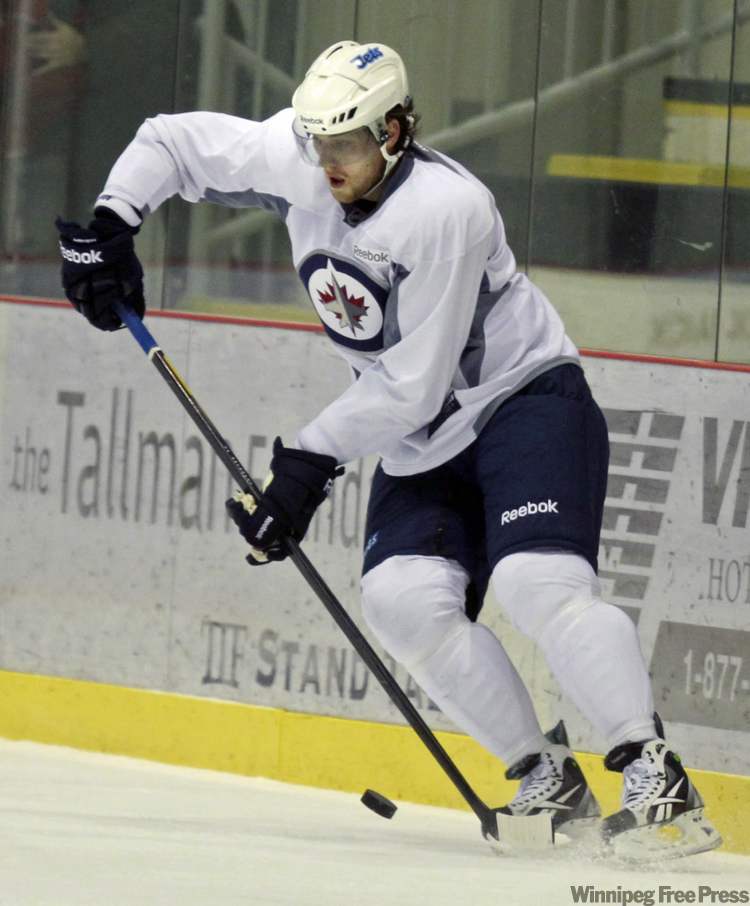