Give 'A's to Stuart, Jokinen instead of Buff, Enstrom

BOSTON -- Leadership doesn't have to be represented solely by the men who wear the 'C' and 'A's on the front of their jerseys.

BOSTON — Leadership doesn’t have to be represented solely by the men who wear the ‘C’ and ‘A’s on the front of their jerseys.

And so, as much as the Winnipeg Jets are once again being led by captain Andrew Ladd and the two men wearing the alternate captains’ letters, Claude Noel is hoping more and more of the collective takes ownership of how the team conducts itself on and off the ice.

“There’s a couple of things that stand out,” said the Jets’ head coach. “All three of them have respect from their peers in the room. They exemplify what you are looking for all over the place, on and off the ice. They’re an extension of the beliefs of the coaches and everybody associated with the team.

“That’s what we feel can help lead us and stabilize us and maybe get us playing more stable on the road with a more singular focus.”

But Noel was also quick to point out something else that, he hopes, speaks of the growing maturity in the room.

“One of the things you can’t misconstrue here is there are a lot of good leaders in our room, a lot of people who could wear (the letters) and can continue to lead,” he said. “I don’t believe and neither do our players believe, that you have to have an ‘A’ or a ‘C’ to lead. We’ve got a good group and a good group of leaders.”

The Jets often rotated the ‘A’s last season, with Dustin Byfuglien and Toby Enstrom seeing much of the duty.

CLAUDE THE CHEMIST: As much as Noel juggled his lines in Saturday’s loss and might be tempted to do more in this two-games-in-two-days road trip, he also has to allow some players to find their game. And find it ASAP.

That likely means no lineup changes for today’s matinee in Boston.

“We’ll try to allow the lines to go,” he said. “If you’re looking to juggle the lines, are you creating more problems or are you trying to help them find solutions? You don’t want to be talking out of both sides of your mouth, sitting there saying we need to allow those guys to stick together and develop chemistry and then be changing everybody.

HMMM… based on Game 1 there is only one Jet who could be called ‘hot’: defenceman Dustin Byfuglien, who scored the only Winnipeg goal and played a smart defensive game.

JUST about anybody in a Jets jersey outside of Byfuglien. As head coach Claude Noel said Saturday night, there weren’t a lot of ‘A’ games from his troops.

THE Jets escaped their opener with an assortment of bumps and bruises, but nothing serious. The injured list still features two names: Zach Bogosian and Antti Miettinen.

Jets brainstorming on how to win away from home 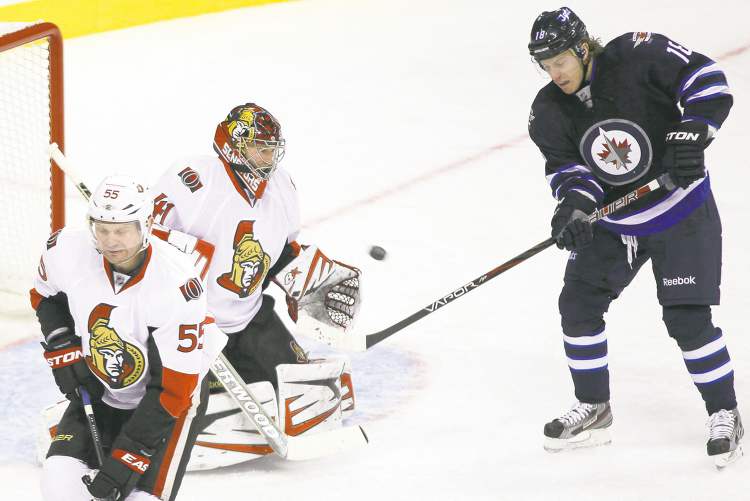