Shaking off the rust

PLANTATION, Fla. -- They are everywhere around the NHL and Olli Jokinen knows he was one of them.

PLANTATION, Fla. — They are everywhere around the NHL and Olli Jokinen knows he was one of them.

The majority of players did not play during the four-month labour dispute, though many like Jokinen were dedicated to their training, doing the best they could to be ready for a start to the season.

So while his conditioning wasn’t an issue, the 34-year-old Finnish centre did not feel like himself for the first few games of the Winnipeg Jets’ schedule,

“It was a while before I played the last time so it’s been a pretty big layover and it’s started to feel better the last few games,” Jokinen said Wednesday. “The only way to train for the game is to play the game, have meaningful games. It’s different when you skate with six guys, play three-on-three.

“When you start competing against the best players in the world, it’s a little different.

“I think a lockout, you try to manage things the best you can. You do what is necessary to stay in shape but it’s pretty much the same thing going into any season. Usually you’ve got those few pre-season games but this time, it’s straight in.”

And so, Jokinen was there for the Jets, but had little to show for it.

In the last two games, however, results have arrived

Jokinen has three points in that time, including a goal and an assist in Tuesday’s 4-3 loss in Montreal.

And in both that game and Sunday’s overtime win against the Islanders, his shooting the puck led to goals for the Jets — one on a rebound for Evander Kane Sunday and the other Tuesday with a laser-like wrist shot in Montreal.

“I think Olli’s a shooter,” said Jets coach Claude Noel. “He hasn’t played hockey in eight or nine months. He hasn’t played too many games. His sense of timing and all that stuff and new linemates and new teammates, there’s a lot of stuff that’s happening in his world.

“To me, I think it’s a good sign that he shot the puck like that. He’s trying to sort some things out. I think he’s played pretty well. For me, that line has been a pretty good line for us. I would like him to continue to get shots.”

Jokinen has been inserted between Blake Wheeler and Kane, clearly the team’s No. 1 forward line, as much as Noel doesn’t like labels.

“He’s getting scoring chances and making plays,” said Noel. “I thought the Islanders game he had two or three really good chances from the middle of the ice, from the slot, so that’s a good sign. He got another one last night he finished and hopefully we’ll build on that.”

Jokinen said the points are the important part of the progress.

“A season like this, or any season, you just try to keep the game simple and try to do things right,” he said. “It’s not about scoring goals or getting points. It’s more about playing the right way and staying with the process, doing things right.

“At the end of the day, end of the season, you’ll usually get rewarded.”

Tonight, Jokinen returns to the arena he called home for almost eight years to start his career when the 3-2-1 Jets take on the 1-5-0 Florida Panthers.

“I have a lot of friends there, live there in the off-season,” Jokinen said. “The bottom line though is that there’s one player left I played with there.

“There has been a big turnaround and I was happy to see them make the playoffs last year. They have a pretty good loyal fan base there and they were waiting for that playoff spot for a long, long time.”

Jokinen said the south Florida area is likely in his future.

“That’s the place where I’m probably going to end up living when I’m done playing and that’s the place the kids call home,” he said. “So it’s always good to go play there. I’ll have a lot of friends coming to the game and it’s always nice to catch up.” 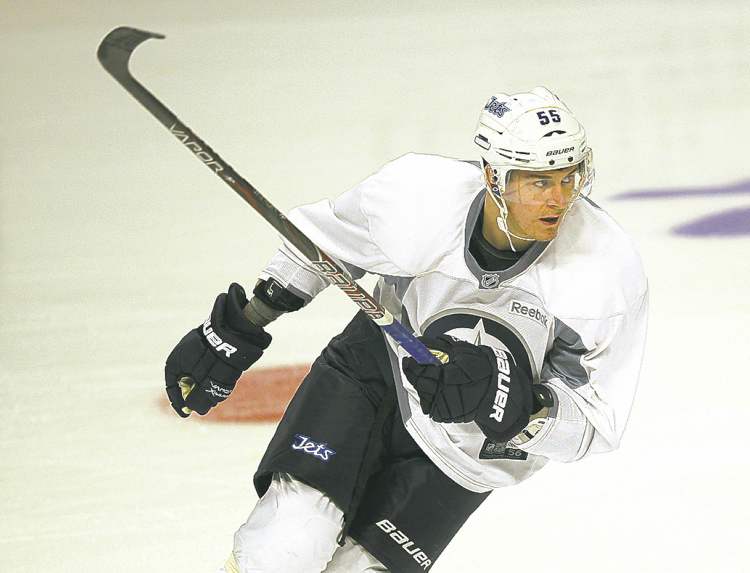