Two scenes, both involving Winnipeg Jets head coach Claude Noel and a varying assortment of voices from the dressing room...

Two scenes, both involving Winnipeg Jets head coach Claude Noel and a varying assortment of voices from the dressing room…

Scene 1, after a win: Players talk about defensive commitment, about all four lines and six defencemen pulling in the right direction, about taking a huge step. Noel cautioning everyone not to separate their shoulders patting themselves on the back.

Scene 2, after a loss: Players speak in hushed tones about urgency, about losing points in a short season. And Noel opening his remarks with, “As far as the game goes, I didn’t like it very much… ‘

Yes, if there was one phrase that might best describe the Jets through 12 games, one-quarter of the condensed 2013 NHL schedule, it might be this: They are consistent in their inconsistency.

Case in point: the Jets reeled off three straight wins from Jan. 22-27, prompting many — including yours truly — to wonder aloud if this squad is maturing before our eyes. That brief moment of glory was followed by three straight losses.

And since then? Win, loss, win, loss. Consistently inconsistent.

“Our record is indicative of how we’ve played: a little bit up, a little bit down,” said Jets GM Kevin Cheveldayoff on Wednesday. “We have to get off that treadmill.”

Some related trends to consider about the Jets at the quarter pole (in no particular order):

— 1. The defensive corps: Yes, for all the concern about starting the campaign without Zach Bogosian and after losing Dustin Byfuglien for five games, this crew has been pretty darn good. Heading into action Wednesday night, the Jets’ D corps led the NHL in points with 34 with Toby Enstrom tied for the scoring lead among defencemen with 13 points.

— 2. The kids and the vet: Further to the work of the defencemen, rookie Zach Redmond has been solid and Paul Postma is exactly as advertised: a player with some offensive flair who needs to be more physical. And Ron Hainsey? Outstanding. Understands his game — both his strengths and weaknesses — as well as anyone.

When Bogosian returns, perhaps Friday against Pittsburgh, the Jets will have exactly the kind of depth and competition in their defensive corps that they need to find up front ASAP. That might explain, in part, why the Jets moved a seventh-round pick to Pittsburgh on Wednesday for Eric Tangradi and then shipped out Alex Ponikarovsky for draft picks.

— 3. Offence/defence: The Jets are averaging 2.67 goals for per game, just down slightly from a year ago (2.70) while surrendering 3.25 a game — up from last year’s 2.95. That speaks dramatically of a lack of progress in two areas the team made priorities to address in the off-season.

— 4. Discuss among yourselves: The two big off-season forward additions — Olli Jokinen and Alex Ponikarovsky — combined for four goals and six points. That doesn’t exactly scream out “impact” additions. Ponikarovsky was dealt Wednesday night and more will be expected of Jokinen, who does have enough respect in the room that he was named an assistant captain.

— 5. The goaltender stats (shield your eyes, kids) — Ondrej Pavelec is 3-6-1 with a 3.28 goals-against average and .886 save percentage; Al Montoya is 2-0, 2.74 and .889. With Montoya now on the shelf and Eddie Pasquale called up from St. John’s, it’s hard not to wonder if management might want to take a look at the fresh new face and not just have him play the emergency-guy role.

— 6. A deceiving number: The Jets’ power-play is ranked 13th overall, but has some chances late in games to close out wins and whiffed. The penalty kill is still dead last in the NHL (67.5 per cent kill rate), but has improved of late (84.6 in the last four games).

— 7. A dearth of depth: The two best prospects in the organization remain first-rounders Mark Scheifele (Barrie Colts) and Jacob Trouba (University of Michigan). Down the farm, the St. John’s IceCaps are led by veteran Jason Jaffray, who is 31 and not exactly a threat to anyone with the big club. Spencer Machacek and Maxime Macenauer have 17 goals between them and are a combined minus-43. Promising speedster Ivan Telegin has three goals in 34 games. Ditto for Patrice Cormier, who has three in 22.

— 8. What’s ahead: Eastern Conference heavyweights Pittsburgh and Boston roll into town next before the Jets depart on their longest road trip of the season with stops in Buffalo, Carolina, Philly, New Jersey and New York to face the Rangers. All told, after this weekend, nine of the Jets’ next 11 games through to March 10 are on the road.

That stretch might not just define the Jets’ 2013 season, but whether this outfit can establish an identity — other than frustratingly inconsistent. 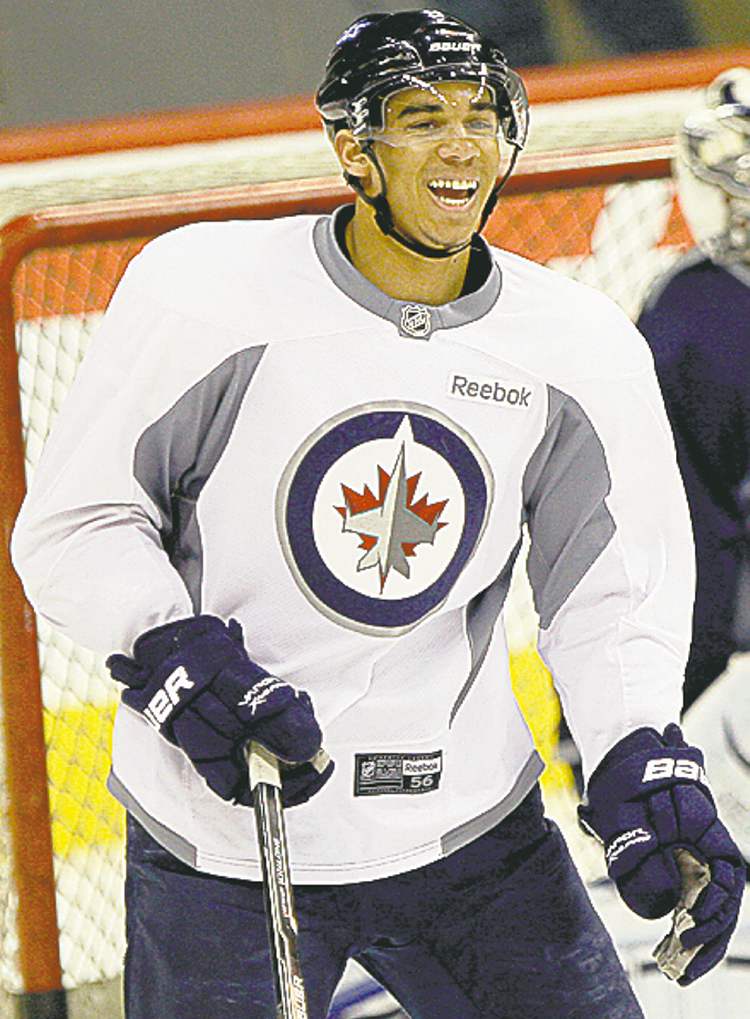