The U.S. president was outraged and unambiguously determined in the wake of the “shocking tragedy” of a Texas school shooting.

The U.S. president was outraged and unambiguously determined in the wake of the “shocking tragedy” of a Texas school shooting.

“What happened is not without a lesson: that we must press urgently for legislation now pending in Congress to help prevent the wrong person from obtaining firearms.”

The words from the White House travelled the breadth and length of a horrified nation — they came from the mouth of President Lyndon Johnson in August 1966 — after a shooting at the University of Texas, one that would result in the death of 16 people, including the shooter.

Yet here the world is once again, 56 years later, watching as the Divided States of America folds in upon itself in the face of yet another outrage committed with a gun — this time having claimed the lives of 19 schoolchildren and two teachers at Robb Elementary School in Uvalde, Texas.

Nowhere is this more apparent than in the U.S. Congress, the place where gun-control measures go to die.

In the wake of this week’s shooting in Uvalde, Sen. Richard Blumenthal, a Democrat from Connecticut, spoke of his great frustration and enduring determination to clamp down on gun violence and reduce gun deaths.

It is a campaign he has been waging not-so-successfully since the 2012 Sandy Hook school shooting that killed 20 students and six teachers in Newtown, Conn.

Standing in the Senate, he hearkened back to a vote in April 2013 that would have forced potential gun owners to submit to expanded background checks, among other measures.

The vote garnered the support of 55 of the Senate’s 100 lawmakers but fell short of the 60-vote threshold to be adopted into law.

“Had we acted — who knows what tragedies could have been averted,” he said.

The problem then — as always, according to Blumenthal — was the Republicans, who systematically oppose all gun control measures, including assault-rifle bans, background checks and even measures to ensure that gun owners lock up their weapons for safe storage.

The reasons are most often rooted in the 231-year-old Second Amendment, which enshrines “the right of the people to keep and bear arms.”

But the religious and political divisions in modern American politics have some Republicans following an even higher power than the U.S. Constitution.

Marjorie Taylor Greene, a Republican member of the House of Representatives from Georgia known for her far-right views, tweeted that mental health — not guns — was the cause of the Uvalde school shooting.

“Sometimes meds can be the problem. America is failing our youngest generations from decades of rejecting good moral values and teachings. We don’t need more gun control. We need to return to God.”

Texas Gov. Greg Abbott, speaking in a news conference Wednesday, said the 18-year-old shooter was a high-school dropout with no criminal history and no known history of mental-health issues.

His first victim was his 66-year-old grandmother. He shot her in the face before carrying out the attack at the school using an AR-15 semi-automatic rifle.

The shooter, Salvador Ramos, wrote three messages about the violence he was to commit on Facebook, but only in the 30 minutes before the crimes were carried out — too late for authorities to intervene.

Abbott said: “There was no meaningful forewarning of this crime.”

He was promptly shouted down by Beto O’Rourke, who is campaigning to succeed Abbott as governor of the state, which in 2021 became one of nearly two dozen states that allow gun owners to carry a weapon without a licence or permit.

“This is on you,” O’Rourke charged. “This was totally predictable.”

“You’re a sick son of a bitch to come to a deal like this and make a political issue!” an unidentified individual in Abbott’s entourage shouted in reply.

So many words have been spilled in the United States in an attempt to push the dial from murderous insanity to legislative responsibility.

In 1999, following the Columbine massacre, President Bill Clinton said: “I don’t want any future president to go to Columbine, or to Springfield, Oregon, or to Jonesboro, Arkansas, or to all the other places I have been.”

In 2012, after Sandy Hook, President Barack Obama said: “We can’t tolerate this anymore. These tragedies must end. And to end them, we must change.”

On Tuesday, President Joe Biden said: “I had hoped, when I became president, I would not have to do this again.”

The murderous repetition, the inaction, the legislative stalemate and the continued bloodshed, is a symptom of the U.S. political system.

The powerful and wealthy gun lobbyists, such as the National Rifle Association, bankroll pro-gun politicians. This is no secret. But a study this month found they have intensified their lobbying efforts in the aftermath of the worst mass-shooting tragedies.

Open Secrets, a group that follows lobbying efforts and political financing in the U.S., found that gun lobby groups spent a record $15.8 million (U.S.) in 2021, breaking the previous record of $114 million in 2013, the year after the Sandy Hook school shooting.

Prior to Sandy Hook, the highest amount spent on lobbying —$6.7 million — was in 2000, the year after the Columbine massacre.

Even when divisive gun-control measures do make it to the floor of the Senate, opposing politicians use the controversial tactic of filibustering, or dragging out debate, to forestall an eventual vote.

It takes the votes of 60 of the Senate’s 100 members to end a filibuster — nine more than a simple majority. Without the votes, Democrats are often forced to abandon gun-control laws.

The divide in Washington mirrors the divide across the United States itself.

Pew Research found in an April 2021 survey that 53 per cent of Americans — the overwhelming majority of whom identified as Democrats — believe gun laws should be stricter. In the same poll of 5,109 people, 73 per cent of respondents who were Democrats said that gun violence was a very big problem, compared to 18 per cent of Republicans.

In other words, the two sides — gun rights and gun control, Republican and Democrat — are as entrenched in their respective positions as is the problem of gun proliferation and gun violence in the United States.

So disheartening, that it might provoke nostalgic for a simpler time — except that a search through the history books reveals there never was a time when the deadly problem of firearms was simple.

Even in 1968, when President Johnson passed what he called “the most comprehensive gun control law ever signed in this nation’s history” he was forced to admit that it fell far short of its goal.

“We just could not get the Congress to carry out the requests we made of them,” he said, referring to licensing requirements that would prevent criminals, the mentally ill and the irresponsible from accessing weapons.

Between the mass shooting at the University of Texas in 1966 and the passage of the Gun Control Act, in October 1968, American also had the assassinations of Dr. Martin Luther King, in April 1968, and Robert F. Kennedy in June 1968, to sharpen their minds.

Johnson blamed the “voices of a powerful lobby, a gun lobby,” for swaying the votes of politicians and denying Americans the protections they are entitled to and that are enjoyed in other nations.

“We have been through a great deal of anguish these last few months and these last few years — too much anguish to forget so quickly,” Johnson said. “So now we must complete the task which this long needed legislation begins. We have come a long way. We have made much progress — but not nearly enough.”

Allan Woods is a Montreal-based staff reporter for the Star. He covers global and national affairs. Follow him on Twitter: @WoodsAllan 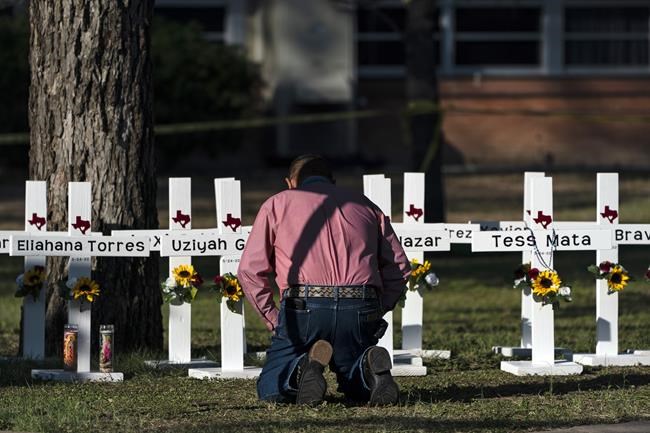