Ministers wrap pipeline talks with hereditary chiefs for the day in B.C.

SMITHERS, B.C. - The hereditary chiefs of the Wet'suwet'en sat down Thursday with senior government ministers to discuss a pipeline dispute that has caused protests across the country, shutting down freight and passenger rail services.

SMITHERS, B.C. – The hereditary chiefs of the Wet’suwet’en sat down Thursday with senior government ministers to discuss a pipeline dispute that has caused protests across the country, shutting down freight and passenger rail services.

“Productive talks and we’re continuing tomorrow,” said Fraser, adding the mood in the room was “very good, very respectful” but it’s not appropriate to discuss the details of what took place.

“We don’t want to jeopardize anything. We had a productive day today and we’re hoping for a very solid day tomorrow, too.”

Bennett said it was a “very good start.”

Freda Huson, a spokeswoman for the Unist’ot’en camp that has been set up near the pipeline work site, said the meeting Thursday only covered introductions and the mood was respectful. She said she will not attend on Friday because the meeting will only involve the head chiefs and government officials.

Before the meeting began, both the RCMP and Coastal GasLink said they agreed to conditions requested by the chiefs to allow the discussions to progress.

The natural gas company agreed to a two-day pause in its activities in northwestern B.C., while the RCMP committed to ending patrols along a critical roadway while the negotiations unfold.

The chiefs praised the moves in a statement released before the talks got underway.

“We believe these conditions provide the space we need to be able to sit down at the table in good faith and a positive path forward,” the statement read.

“We are so close and have called on the provincial and federal governments to support this de-escalation of activities so that this issue can be resolved.”

The chiefs said the meeting with Bennett and Fraser is a “first step,” noting both Prime Minister Justin Trudeau and B.C. Premier John Horgan declined invitations to discuss the long-simmering issues that have gained fresh urgency in recent weeks.

The chiefs’ opposition to a natural gas pipeline cutting across their traditional territory, coupled with their efforts to limit police presence on their lands, have sparked shows of support across the country that have halted rail service for the past three weeks.

Bennett said she hoped the meetings would pave the way to end the dispute and protests.

“Obviously this is very important,” she said moments after arriving in Smithers. “We reaffirm our interest in talking to the Wet’suwet’en Nation and their issues of title and rights.”

Horgan said he has met with the hereditary leaders twice over the past year and a half and is prepared to sit down with them again, but there need to be conditions for constructive dialogue.

Fraser understands the community’s governance issues and Bennett represents the Crown in Canada, so the best way forward is for them to be at the table, he said.

“I think that this is a good step. I’ve been seeking peaceful dialogue for a couple of weeks and here we are,” he said. “I’m looking forward to harmony as a result of those discussions.”

Indigenous Services Minister Marc Miller said the meeting was a victory for open dialogue and peaceful resolution, but it is only the beginning as there are underlying rights and title issues that will take time to resolve.

Wet’suwet’en community members are divided on the pipeline and about a dozen supporters of the project gathered outside the Office of the Wet’suwet’en while the meeting took place.

Bonnie George, a former Coastal GasLink employee who describes herself as a Wet’suwet’en matriarch, handed out a statement that she attributed to the Wet’suwet’en people.

“The public attention brought to our community is having a negative effect on our people and eroding our traditional ways,” George said, reading from the statement.

Hereditary chiefs are not decision-makers on their own and are instead meant to reflect the consensus of their clan or house and reach decisions together inside a traditional setting called a Feast House, she said.

George said she wasn’t invited to the meeting but she went into the room with others and they made a statement, telling the gathering that the entire nation needs to be represented.

The dispute over the Coastal GasLink pipeline project has been raging for months, but entered a new phase on Dec. 31, 2019, when the B.C. Supreme Court granted the company an injunction calling for the removal of any obstructions from any roads, bridges or work sites it has been authorized to use in Wet’suwet’en territory.

The RCMP moved in to enforce that injunction on Feb. 6. Hours later, protesters started holding up railway traffic outside of Belleville, Ont., in solidarity with the Wet’suwet’en hereditary chiefs, thwarting freight and passenger rail travel.

In Ottawa, one Conservative MP questioned Thursday whether the blockades constitute acts of terrorism.

The rookie MP said he was asking on behalf of a constituent who sent him an email after a handful of protesters in the Belleville area lit fires near and on railway tracks the day before — actions that were denounced by Trudeau.

“This resident wanted to know if the current illegal blockades that are happening across Canada are being deemed as a terrorist activity?” Shipley asked.

Blair said they were not, adding the government should not interfere with the police’s ability to identify and investigate criminal activity in their jurisdiction.

“It’s very appropriate that I be careful in doing that because I do not want to interfere with the operational independence of both the police and our prosecutors,” he said. “But at the same time that was terribly unsafe, deeply concerning.”

RCMP Commissioner Brenda Lucki testified at the same committee hearing, saying the Mounties have discretion on how to enforce an injunction.

“Of course, enforcement is the last option,” she said. “It’s about dialogue and trying to find a peaceful resolution to the blockades.”

The Ontario Provincial Police took down a major blockade near Tyendinaga Mohawk Territory earlier this week. But about 20 demonstrators gathered near train tracks in Kingston, Ont., farther east along the same line, on Thursday morning.

Local police said the group gathered on the Canadian National Railway Co. overpass, but train traffic had not been affected and officers were monitoring the situation.

Police in Victoria said two protesters were arrested for mischief after using a substance to write messages that included profanity on the building, driveway and walkway of the B.C. legislature.

This report by The Canadian Press was first published Feb. 27, 2020.

—With files from Michelle McQuigge and Liam Casey in Toronto, Mike Blanchfield in Ottawa, and Beth Leighton and Laura Kane in Vancouver. 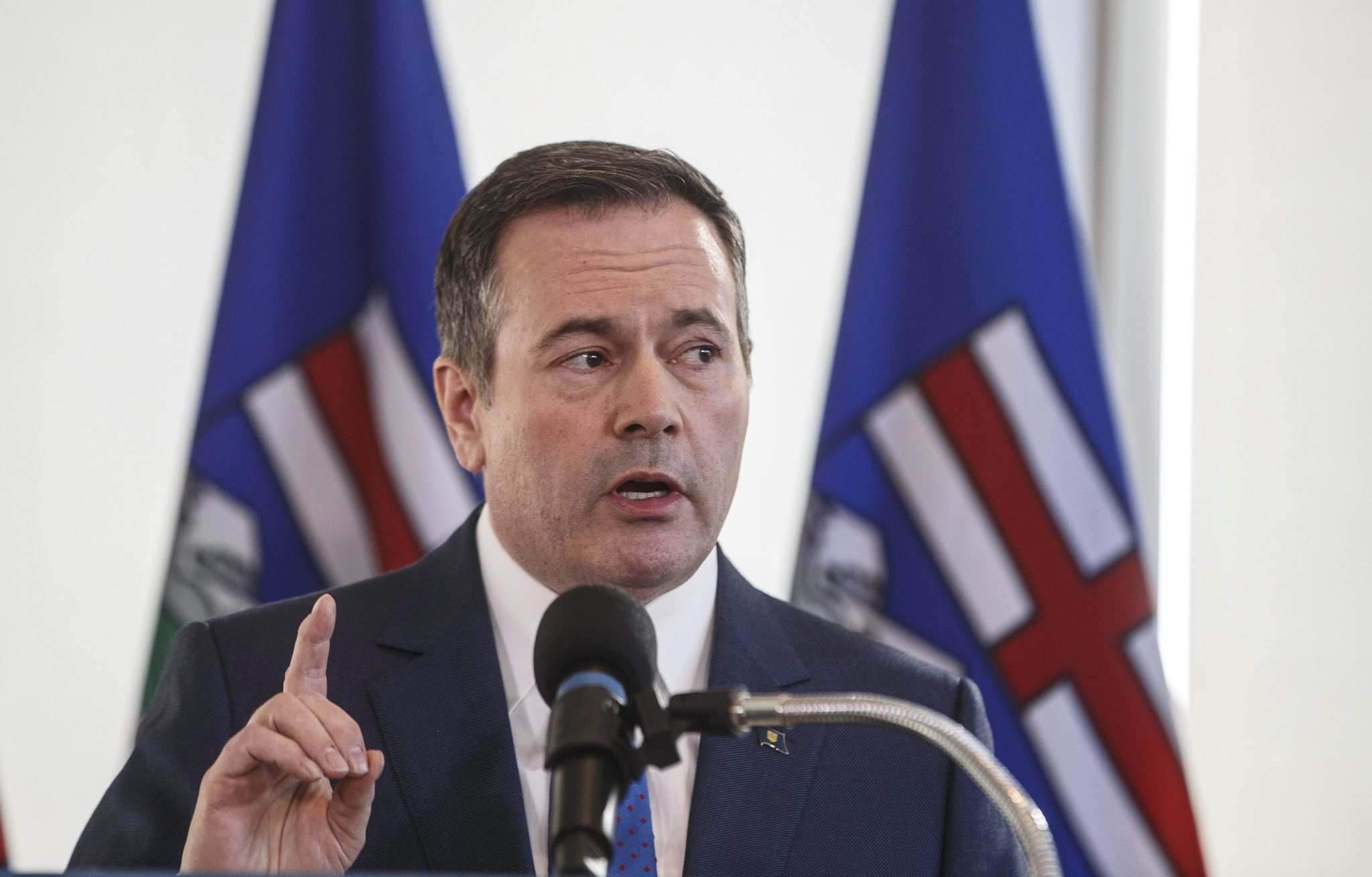 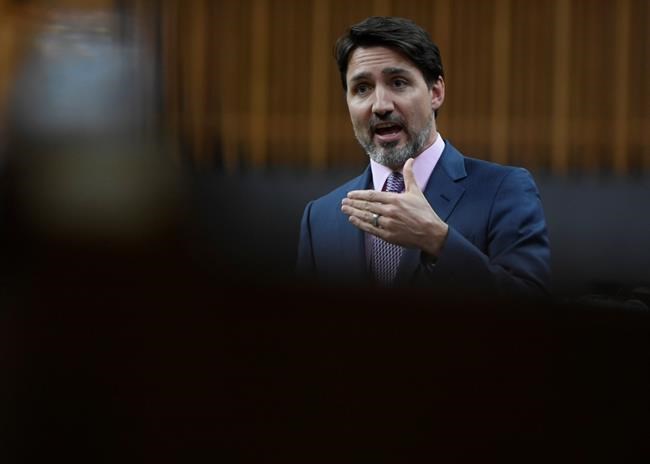 The latest on protests in support of Wet'suwet'en 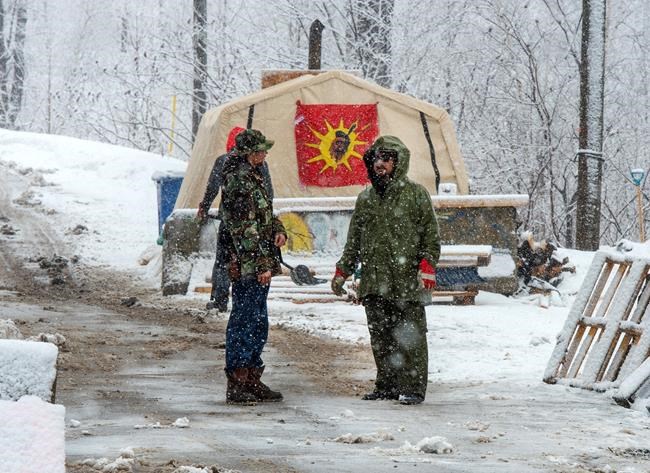 A timeline on rail disruptions by anti-pipeline protesters across Canada 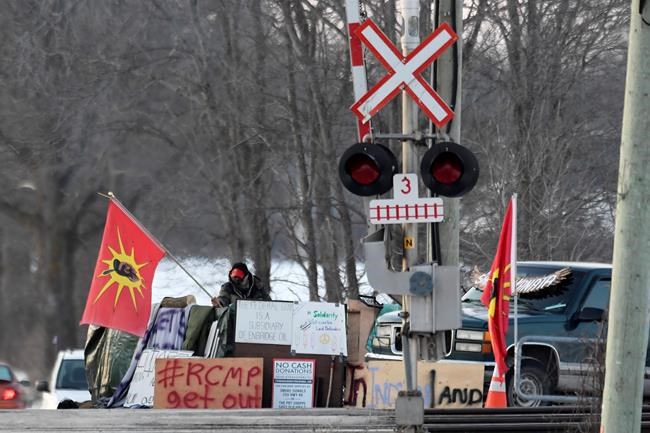 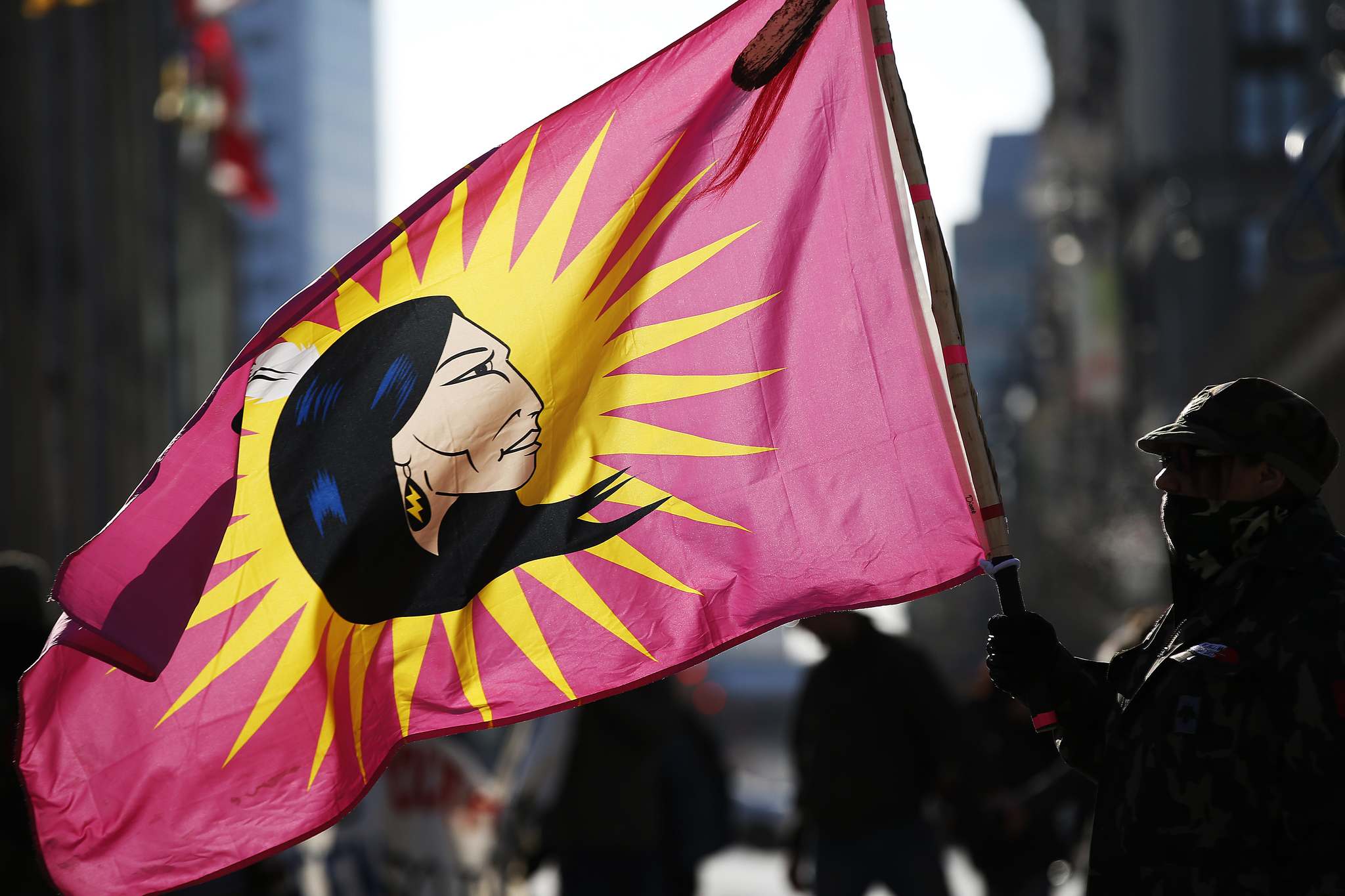 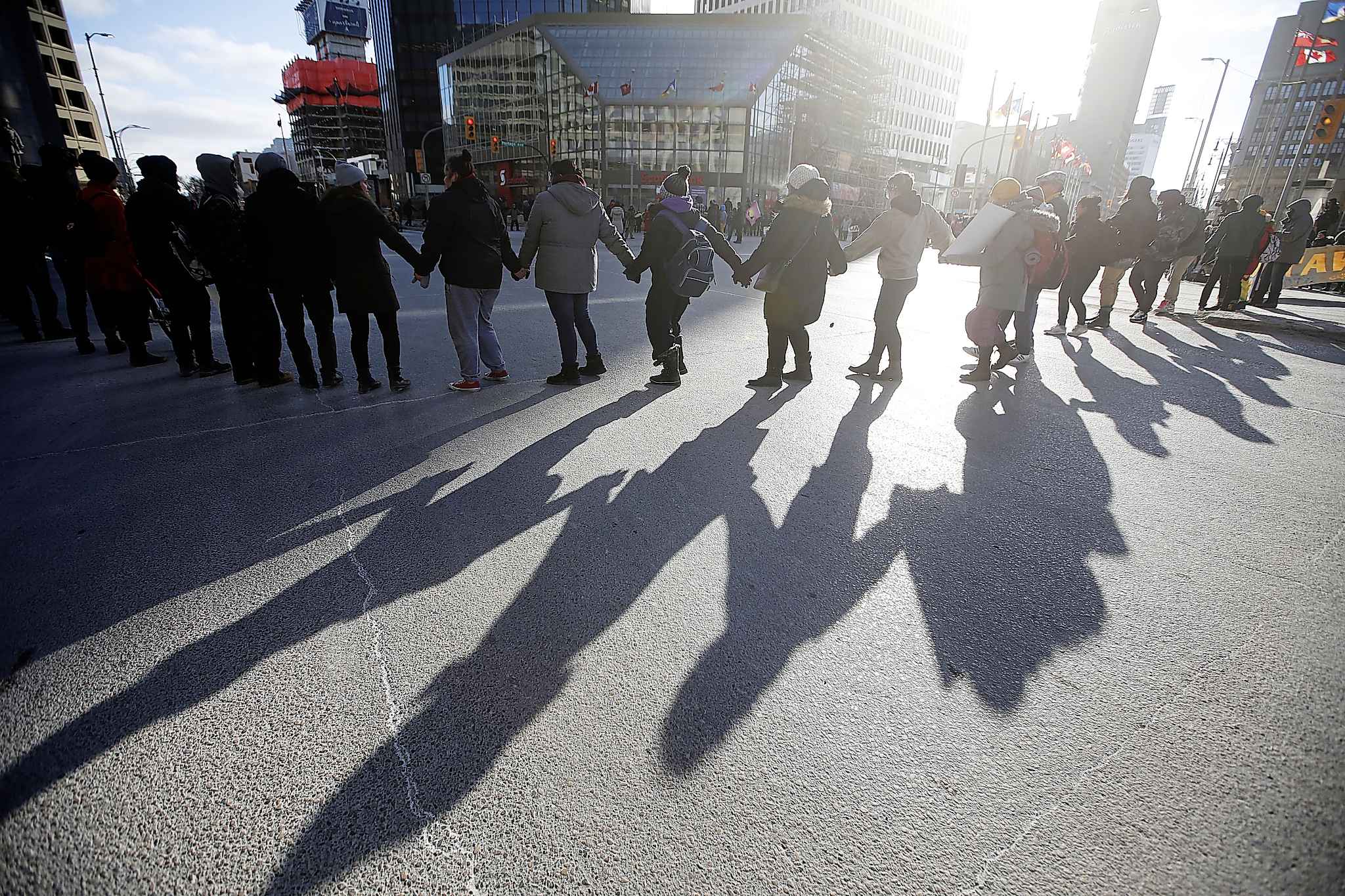 Policing must go on in Wet'suwet'en area: Blair 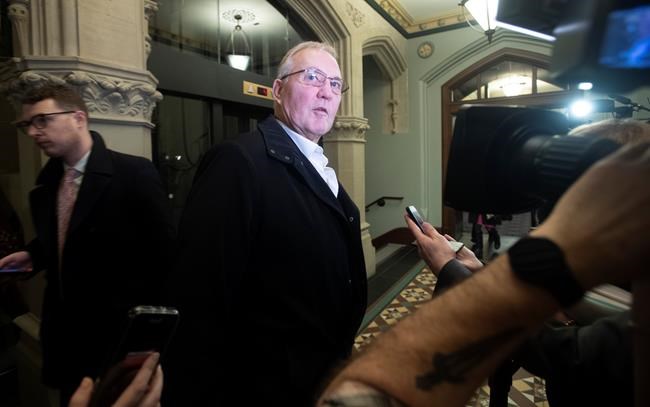