Gloria Froese knows that her 17-year-old self would have been front and centre at anti-mask protests.

Gloria Froese knows that her 17-year-old self would have been front and centre at anti-mask protests.

Two decades after Froese left the Church of God Restoration, whose pastors and members have attended such protests in Manitoba, she says the church’s real goal is to recruit members and retain its current flock.

Winkler may be known for farmer sausage, its large Mennonite population, and being the largest city in the Pembina Valley.

Winkler may be known for farmer sausage, its large Mennonite population, and being the largest city in the Pembina Valley.

But Mayor Martin Harder, said there’s one thing his city shouldn’t be known for — being too zealous in enforcing COVID-19 restrictions.

Harder said he has been getting calls from media outlets from around the world after Rebel News reported four teens were recently pulled over by police and fined a total of $5,200. Although they were from different households, they were together in a vehicle. The story called one of the young people “another victim of the increasingly authoritarian micro-state of Winkler.”

“It is far from that,” Harder said on Friday.

“We haven’t abused the powers. We have been very gentle.”

Harder dismissed the accusation that the city has conducted enforcement and issued fines as a tax grab.

“All of it goes to the province. We don’t get any of it. We don’t keep the money.”

The church is expected to participate at a rally at Steinbach’s city hall on Saturday.

“I never thought I would see them get this political,” Froese said on Friday. “I think now they are doing drive-thru and following the rules… but they think this is the first step to having their religion taken away. They don’t listen to reason.

“They say we are the one true church, we are the only ones going to heaven. They truly believe more people will come join them. Every world event that has happened, they say people will flow to the church. They believe millions will come. They get all psyched up and then it never happens.

“But when this pandemic is over, and the people haven’t come, they will be frustrated.”

On Saturday, the anti-mask group Hugs Over Masks will hold its second rally in Steinbach. The first rally, on Nov. 14, attracted dozens of people, including Church of God Restoration pastor Tobias Tissen, who spoke to the participants. Many of them received tickets from provincial enforcement officers days after the gathering, which was against pandemic rules.

In a statement Friday, Hugs Over Masks said the purpose of the rally “is to stand against (Premier Brian) Pallister and the rest of the PC party for stripping away all of our freedoms, as well all of the deaths and mental health abuses this Manitoba government is inflicting upon its people.

“Protecting the vulnerable and ensuring hospitals are not bursting at the seems (sic) can be handled in a much more balanced and less intrusive approach as the government is legally required to do so.”

The group said speakers at the rally will include people from the medical field, clergy, and economics experts.

The November rally was held days after Manitoba entered a strict code red lockdown because the number of COVID-19 infections had skyrocketed.

But the church, located south of Steinbach, defied those rules and had weekly drive-in services. The church was slapped with two $5,000 fines, and Tissen received three fines of $1,296 each. The restrictions have since been eased and churches can hold drive-in services in parking lots.

Froese said she left the church, along with her parents who were pastors at the time, in 2000.

She said since then, she has graduated with a bachelor’s degree in fine arts and she identifies as atheist, a result of being able to ask questions after years of being silenced by the church.

Froese said the church — which is based in the United States and has another congregation in Aylmer, Ont. — has always tried to become better known, so it can increase membership. Recently, it became political after a group of members attended a Black Lives Matter march in Minneapolis and their attendance went viral on social media, even though they were incorrectly identified as Amish.

“It was a little surreal for me to see them hold signs that say ‘We are one human family’ when I know what they really think of outsiders,” she said. “Outsiders have always been less than, sinners, the way to hell… Short answer: this was marketing for them. They don’t particularly have interest in any of these causes for their own sake. It’s all about the attention and marketing to bring in new adherents.

“They are doing this narrative to get money for the church.”

Froese said going to services is mandatory for members of the Church of God Restoration and she said going to the rally, while not mandatory, would be highly recommended.

“They control everything there,” she said.

“They’ve taken up the anti-lockdown cause because some people will actually admire and listen to them, but that’s all it is — a way to get people to pay attention to them.”

No place for 'far right' in Conservatives: O'Toole 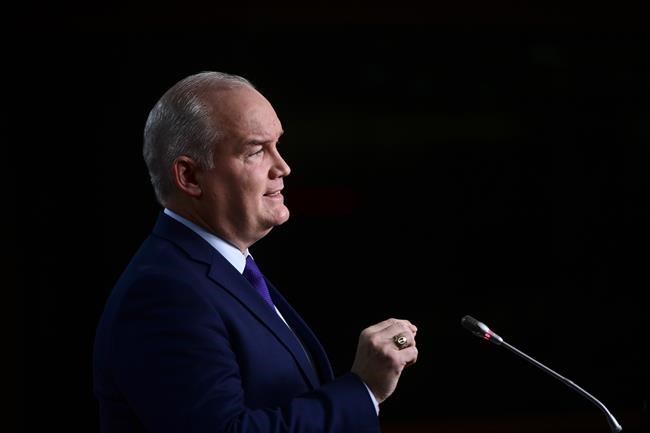