It was anyone’s game in St. James, but Shawn Dobson won out in the end.

Dobson, who previously represented the former St. Charles ward on city council from 2014-18 (which was then dissolved and merged into St. James and Charleswood-Tuxedo-Westwood), was in competition with four other candidates in the 2022 municipal election. The ward had no incumbent, with two-term councillor Scott Gillingham making the jump into the Winnipeg mayoral race.

“I’m good. Actually, I’m ecstatic,” Dobson said, as reporters arrived at his election party Wednesday night — held at his mother’s house, where he grew up — moments after he learned he’d won.

Wearing a suit and surrounded by a small group of supporters, who passed around mimosas, Dobson said he was ready to hit the ground running as a second-time Winnipeg councillor.

“This time, I know what I’m getting into,” he said. “I’ll be much more effective.”

He listed off key priorities, including being more open and transparent at city hall, balancing the budget, addressing crime in the city, making Transit safer, and working with other levels of government.

Dobson said he was backing Gillingham for mayor.

In a brief prepared speech, Dobson thanked friends and family for helping his campaign and the residents of St. James who believed in him.

Dobson said he wouldn’t be celebrating too hard that evening — he lives around the corner and would be up early collecting the signs of support from neighbours’ lawns.

The other four candidates who threw their hats into the ring included: Eddie Ayoub, artistic director of non-profit art programming organization Art City; Tim Diack, a long-time Winnipeg police officer who finished third in the 2018 mayoral race; Daevid Ramey, a communications manager at IKEA; and Kelly Ryback, a retired businessman.

Dobson said he would always be available to speak with anyone, including the four who ran against him, about how to make their community stronger.

The St. James ward includes the airport, Polo Park shopping centre and residential neighbourhoods Bruce Park and West Wolseley. Most of the ward candidates awaited their political fate at local restaurants, watching the poll results roll in, alongside supporters. 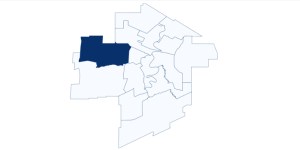